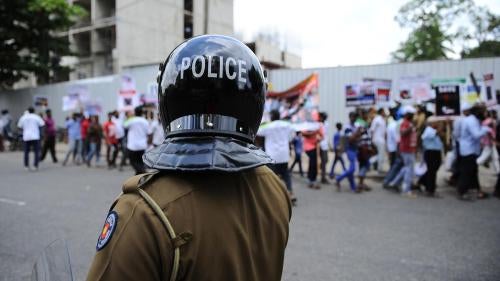 The new government quickly abolished surveillance and censorship of media and civil society groups, embarked on constitutional reforms to restrict executive powers, and took steps to restore the independence of the judiciary. In contrast to the combative approach of the Rajapaksa government, it also initiated a new, more open dialogue with the international community, including human rights organizations.

However, the government took no significant measures to end impunity for security force abuse, including police use of torture. At time of writing, the government also had not yet repealed the draconian Prevention of Terrorism Act (PTA), despite promises to do so, and continued to detain people under it. Following a sustained hunger strike by an estimated 200 PTA detainees, the government in November released some on bail, sent others for rehabilitation, and pledged to charge and try the rest.

In August, the United Nations Office of the High Commissioner for Human Rights (OHCHR) issued a scathing report on abuses committed by all sides during Sri Lanka’s 1983-2009 armed conflict with the secessionist Liberation Tigers of Tamil Eelam (LTTE). The report, which was mandated by a March 2014 Human Rights Council (HRC) resolution on Sri Lanka, documented credible accounts of unlawful attacks, killings, enforced disappearances, torture, sexual violence, and attacks on humanitarian assistance .

Following the report, HRC member states endorsed a resolution calling on the Sri Lankan government to implement the report’s many recommendations, including to establish a special counsel to investigate and prosecute alleged wartime abuses, and to include foreign judges and prosecutors in a Sri Lankan tribunal.

The government began to investigate some emblematic cases of serious human rights violations during the conflict, including the killing and enforced disappearance of journalists.

In June, the new government brought in the 19th amendment to the constitution. It places new checks on the power of the executive and seeks to restore the independence of police, judicial, human rights, and election commissions. Although the amendment was not as far-reaching as initially proposed, it limits the presidential term and increases the powers of the prime minister. In September, the government announced that it had established a Constitutional Council which, in turn, will oversee appointments to the independent commissions. Long-time human rights advocates were appointed to the Commission on Human Rights, a body that had been moribund during the Rajapaksa years.

The government has promised to seek further constitutional and legislative changes on electoral reforms and devolution of powers.

In September, the OHCHR, as mandated by a Human Rights Council resolution in 2014, published its report investigating allegations of unlawful attacks on civilians, killings, disappearances, rape and sexual violence, forced recruitment of children, and the intentional denial of humanitarian assistance, and other violations of international law by the government and the LTTE.

The report documented serious violations and called on the government to establish a “hybrid” justice mechanism, including both domestic and international investigators and prosecutors, to adopt legislation criminalizing war crimes, crimes against humanity, genocide and enforced disappearances without a statute of limitations, and to enact command responsibility as a mode of liability.

Based on the OHCHR report, the Human Rights Council, with Sri Lanka’s acquiesence,  adopted a consensus resolution that recommended establishing a special court “integrating international judges, prosecutors, lawyers and investigators” with an independent Sri Lankan investigative and prosecuting body. The resolution was left with the Sri Lankan government to work out the details for this body, including the role and number of the tribunal’s foreign judges and prosecutors. The government has since turned to civil society groups from across the country for their input on this and a resolution-endorsed truth and reconciliation commission.

The Sri Lankan government, through the resolution, accepted many recommendations to improve the country’s human rights situation, including a repeal of the PTA and reforms to the Witness and Victim Protection Law. The government also agreed to accelerate the return of land to its rightful civilian owners; to end military involvement in civilian activities in the country’s north and east; to investigate allegations of attacks on members of civil society, media, and religious minorities; and to reach a settlement on the devolution of authority to the provinces.

Some key undertakings in the resolution include the establishment of a dedicated office on enforced disappearances; a truth, justice, and reconciliation commission; and an office on reparations. The government also released two sets of presidential commission reports on human rights violations, which included reports that had been completed, but not made public in May 2009.

In November, the government began planning public consultations throughout the country as an initial step towards the establishment of these offices.

In November, the UN Working Group on Enforced and Involuntary Disappearances visited Sri Lanka at the invitation of the government. The group noted the almost complete lack of accountability for disappearances and the lack of sustained efforts to uncover the truth about what happened to the victims. The group also expressed concern that some of the people they had met with on their trip were subsequently visited by members of the security forces and were questioned about their meeting with the group.

In May, the government appointed as its new army chief, a senior officer whose division was implicated in serious human rights abuses. Maj. Gen. Jagath Dias led the Army’s 57th Division during the last two years of the civil war, and his promotion created concerns that the new government, like its predecessor, would shield senior military personnel from accountability.

Police in Sri Lanka continued to routinely torture and ill-treat individuals taken into custody to extract “confessions,” but also for personal vendettas or to extort funds.

While Sri Lanka has legislation prohibiting torture, the government failed to ensure disciplinary or criminal prosecutions against police officers and their superiors. Many alleged perpetrators remained in active duty or were merely transferred to another police station. Only in a handful of particularly egregious cases in the media spotlight was serious action taken against the offending officers. Even in those cases, superior officers were not held to account as a matter of command responsibility.

Victims of torture and their families faced a daunting path to redress and justice. Those of limited means, particularly from rural communities, often found the various procedural steps overwhelming and prohibitively expensive. Many reported ongoing harassment by the police when back in their villages.

Sri Lanka’s new government agreed to review and repeal the Prevention of Terrorism Act, though said it would replace the law with new counter-terrorism legislation. The PTA has long been used to hold suspected LTTE members and others without charge or trial for years. In spite of promises to make the whereabouts of all detainees known to their relatives, many family members received no information about where, or indeed if, their loved ones are detained.

The PTA allows for arrests for unspecified “unlawful activities” without warrant and permits detention for up to 18 months without producing the suspect before a court. The government need not charge the person with an offense; many PTA detainees have been held for years without charge. And the act provides immunity from prosecution for government officials who may commit wrongful acts, such as torture, under the legislation.

The PTA facilitated thousands of abuses over the years, including torture to obtain “confessions,” enforced disappearances, and extrajudicial executions. The law has been used since the end of the war, including under the present government, to detain and torture people suspected of links to the LTTE, including forcibly returned asylum seekers. Many instances of torture, sexual violence, and other ill-treatment occured in the Criminal Investigation Division and Terrorist Investigation Division offices in Colombo and elsewhere, while others occured in unofficial places of detention.

In November, the government announced a plan to deal with the Tamil detainees held under the PTA. At time of writing, authorities had released 39 detainees on bail and sent a further 99 for rehabilitation, although the exact contours of the rehabilitation program remained unclear. The government has pledged to charge and try the rest.

In October, the government decided to issue official certificates to the families of the disappeared affirming their status as “missing” instead of “deceased.” This allows for the families to obtain certain benefits while being more sensitive to the families’ emotional needs and the need for a continued investigation into their cases.

More than one million Sri Lankans are employed overseas and many remained at risk of abuse at every stage of the migration cycle, from recruitment and transit, to employment, repatriation, and reintegration. More than a third of Sri Lanka’s migrants are domestic workers, almost exclusively female. The government took some steps to protect their rights abroad, but many continued to face long working hours with little rest, delayed or unpaid wages, confinement in the workplace, and verbal, physical, and sexual abuse.

Sri Lanka criminalizes “unnatural” sex, acts of “gross indecency,” and "cheating the public by impersonation.” Police have used these and other laws, such as a vaguely defined “vagrancy” prohibition, to target LGBT people. In 2014, government officials told the United Nations Human Rights Committee that the Sri Lankan Constitution’s equal protection clause “protects persons from stigmatization and discrimination on the basis of sexual orientation and gender identities,” but neither the constitution nor any other law expressly prohibits discrimination on such grounds.

The United Nations Human Rights Council in October adopted by consensus a resolution calling on Sri Lanka to establish a credible accountability mechanism, with the involvement of Commonwealth and foreign judges, prosecutors and investigators. The United States, United Kingdom, Macedonia, Montenegro, and Australia, among others, sponsored the resolution.

Since it was adopted by consensus, the resolution brought on board key states that did not support the previous resolution in March, notably India.

However, concerns remained about the failure of sponsoring states to ensure proper provisions for international oversight of implementation of the terms of the resolution. The resolution only calls for an oral update from the high commissioner during the council’s 32nd session in June 2016 and a written implementation report at the 34th session in March 2017. The US and other sponors backed away from including language on certain important issues, such as having a majority international judicial presence and command responsibility.