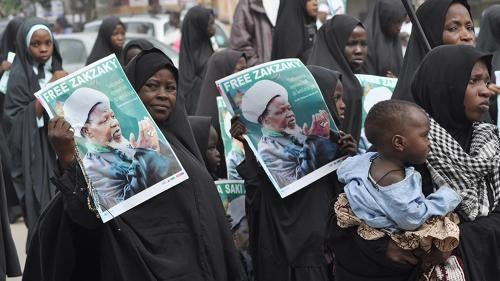 Relatively peaceful presidential and gubernatorial elections in March and April 2015 marked a positive shift in Nigeria’s history of political violence. However, the inauguration of President Muhammadu Buhari has not diminished the potency of the country’s serious human rights challenges. Violence and insecurity persist in the northeast despite the recapture, from the militant group Boko Haram, of dozens of towns and the rescue of over 1,000 hostages by Nigerian and neighboring countries’ forces. The name Boko Haram means “Western education is forbidden.”

Boko Haram carried out probably its most vicious attacks in January around Baga, a fishing settlement in Borno state, northeast Nigeria, killing at least 2,000 people and sacking the military base of the Multinational Joint Task Force (MNJTF). More than 9,500 civilians have died in the conflict and the number of displaced people has increased from just over 1 million at the end of 2014 to almost 2 million in 2015. Nigerian security forces have neither taken adequate steps to protect civilians during operations against Boko Haram, nor to protect the rights of rescued hostages.

In other parts of the country, frequent violence between farmers and cattle owners in the north-central states remained unresolved in 2015. There have been few investigations or prosecutions against those responsible for the violence. The lack of justice for victims helped fuel reprisal attacks, leading to continuous cycles of violence. Impunity for human rights crimes—such as torture committed by security forces, including police—remained pervasive.

The conflict in the northeast between the militant group Boko Haram and Nigeria’s security forces grew more deadly in 2015. By the beginning of the year, Boko Haram had seized control of 17 local government areas (LGAs) across parts of the northeast in Adamawa, Bauchi, Borno, and Yobe states. LGAs are the third and lowest level, after federal and state levels, in Nigeria’s administrative structure.

Security forces from Nigeria and its neighbors have since regained control of most of the towns, but the rebels remained active in many rural areas. In July, the governors of Borno and Yobe states said that Boko Haram retained control of a total of five LGAs in their states. An estimated 3,500 died in the conflict in 2015, while most of the 2 million displaced people live with limited access to basic rights like food, shelter, and healthcare.

The horrific attack in Baga and on the nearby MNJTF headquarters was followed by repeated attempts by Boko Haram in January and February to seize military installations in Maiduguri and Monguno, both in Borno state. Increasing cross-border attacks led to an African Union sanctioned renewal of the MNJTF agreement and the mobilization of forces from Nigeria, Cameroon, Chad, and Niger. Boko Haram violence intensified in more than 200 attacks against communities in these countries since February, apparently in retaliation for the involvement of their security forces in military operations.

The group also continued to attack schools, abduct hundreds of women, and increase its use of children as suicide bombers. On July 26, in a style typical of Boko Haram bombings, a 10-year-old girl blew herself up in a busy market in Damaturu, Yobe state, killing at least 15 and injuring 46. Government forces managed to rescue over 1,300 hostages, but none of the 219 missing school girls abducted by the insurgents in April 2014. Some of the rescued people have been held in military facilities since May with little clarity about their status as victims or detainees.

Nigerian authorities have yet to open credible investigations into allegations of heavy-handed and abusive response to the insurgency by security forces. Since 2009, hundreds of men and boys in the northeast have been rounded up and detained in inhumane conditions for suspected membership or provision of support for Boko Haram.

There are also allegations of use of excessive force, and inadequate civilian protection measures, including for Boko Haram hostages, by the military in the ongoing operations in the northeast. When the Nigerian army drove at high speed into Sambisa Forest Reserve in late April, some Boko Haram hostages, mostly women and children, were crushed by moving trucks. Survivors said soldiers did not issue instructions on how the hostages could avoid danger.

Abusive conduct by security forces is not limited to the northeast. On April 11, during the gubernatorial elections, soldiers allegedly killed four voters at a polling unit in Bayan Dutse, Kebbi state, northwest Nigeria.

Authorities have rarely prosecuted members of the police and military implicated in abuses. While some soldiers have been prosecuted in military tribunals for offences such as cowardice and mutiny, the pervasive culture of impunity means almost no one has been held to account for human rights crimes.

In apparent recognition of these problems, President Buhari appointed new leadership for the military. He also moved the command and control center of the military from Abuja to Maiduguri—the epicenter of the conflict.

In July and September, the military released 310 people, including women and children, from detention in Borno and Yobe states who had been detained without charges for at least two years. Also, in May, Nigeria endorsed the Safe Schools Declaration, thus expressing a commitment to implement the Guidelines on Protecting Schools and Universities from Military Use.

These steps have fallen short of Buhari’s inauguration promise to reform the military. Disappointingly, he claimed during a July visit to Washington D.C. that the application of the United States Leahy Law amendment, which bars US support to abusive units of foreign military forces, has served to aid Boko Haram.

Local vigilante groups assisting Nigerian security forces to apprehend the militants and repel attacks are also implicated in the recruitment and use of child soldiers, as well as the ill-treatment and unlawful killing of Boko Haram suspects.

In Nigeria’s volatile “Middle-Belt” region, years of economic and political tensions between ethnic and religious communities repeatedly erupted in uncontrolled violence in 2015. The violence is fueled by competition for power and access to land between nomadic and farming communities. Mobs have killed many of their victims based simply on ethnic or religious identity.

Nigerian authorities have failed to address the root causes of the violence and rarely prosecuted those responsible, including the police or military implicated in serious abuses. On May 2, 2015, according to media reports and local sources, security forces killed at least 28 people when they attacked the Langtang and Wase communities following the killings of six soldiers a few days earlier.

Corruption and weak governance undermine the enjoyment of basic human rights for many Nigerians who live in abject poverty. High unemployment rates—along with public sector corruption and insecurity—were major issues in the March national elections. President Buhari came into power on an anti-corruption platform, promising to confront corruption and lack of transparency in government business.

A number of senior officials in the administration of former President Goodluck Jonathan have been arrested and faced prosecution by the Economic and Financial Crimes Commission (EFCC), since President Buhari’s inauguration in May. The agency was in turn controversially accused in August of mismanaging and embezzling funds recovered from people convicted of corruption. On November 9, 2015 Ibrahim Lamorde, the EFCC chairman, was replaced by Ibrahim Mustafa Magu, appointed in an acting capacity.

The passage of the so-called Same-Sex Marriage Prohibition Act in January 2014—which banned “gay clubs and organizations,” support for such organizations, and public display of affection between same-sex couples—has had a chilling effect on freedom of expression for lesbian, gay, bisexual, and transgender people, human rights organizations, writers, and others. Organizations have reported cases of blackmail, evictions, and fear of seeking health care since the law’s passage.

Under pre-existing laws, “carnal knowledge against the order of nature” is punishable by 14 years in prison. In 12 northern states where Sharia law is in effect, homosexual acts are punishable by imprisonment, caning, or death by stoning. Activists are unaware of recent cases in which the death penalty has been implemented. Police arrested 12 men on homosexuality charges in Kano state in January and 21 men in Oyo state in May, though all were subsequently released hours later.

Freedom of Expression, Media, and Freedom of Association

On May 29, Daily Trust journalist Joseph Hir was beaten, allegedly by supporters of the Nassarawa state governor for writing a “negative” about the governor. A month later, Yomi Olomofe, executive director of Prime magazine, and McDominic Nkpemenyie, a correspondent with Tide newspaper, were severely beaten and injured by a group of people at Seme customs border post in Lagos. The group was allegedly upset by previous unfavorable reports of their activities by the journalists.

International actors, notably the United Kingdom, United States, and United Nations, have expressed optimism in their support of the new government’s reform agenda on security and public sector corruption. The UK, US, UN, and the European Union assisted Nigeria in achieving a peaceful outcome in the March elections.

The UK provides a substantial package of military, intelligence, development, and humanitarian assistance to Nigeria and its neighbors in confronting the Boko Haram challenge. In July, US Deputy Secretary of State Anthony Blinken said the US would deepen its support of Nigeria to develop a comprehensive approach committed to human rights in responding to Boko Haram. Blinken was visiting Nigeria ahead of President Buhari’s trip to Washington D.C. later that month.

Ban Ki-moon, the UN secretary general, during a visit in August, noted that “respect for human rights has been most visibly challenged in the context of the Boko Haram threat.” He urged the government to ensure its counterterrorism response is not “counterproductive.” During an update to the UN Human Rights Council in June, the UN High Commissioner for Human Rights Zeid Ra’ad Al Hussein said in relation to Boko Haram, Nigeria should adopt “a profound policy response that is grounded in the need for accountability and reconciliation.”

In January, the African Union approved the MNJTF initiated by Nigeria and its neighbor members of the Lake Chad Basin Commission. The initiative was noted by the UN Security Council in a presidential statement on Boko Haram adopted on June 28.

On November 12, the Office of the Prosecutor of the International Criminal Court (ICC) released a report detailing six possible cases against Boko Haram and two possible cases against Nigerian security forces for crimes against humanity and war crimes in relation to the northeast insurgency. The ICC said it was continuing its “preliminary examination” of the situation in Nigeria with a focus on the adequacy of efforts to ensure accountability for serious crimes before domestic courts.