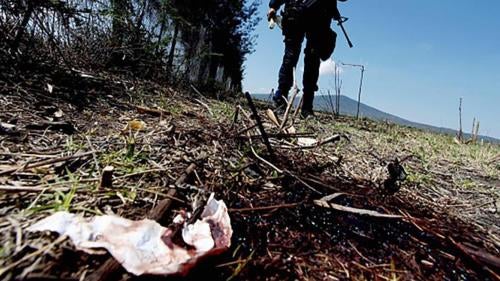 During the administration of President Enrique Peña Nieto, Mexican security forces have been implicated in repeated, serious human rights violations—including extrajudicial killings, enforced disappearances, and torture—in the course of efforts to combat organized crime. The government has made little progress in prosecuting those responsible for recent abuses, let alone the large number of abuses committed by soldiers and police since former President Felipe Calderón (2006-2012) initiated Mexico’s “war on drugs.”

In September 2015, an expert group established through an agreement between the Mexican government and the Inter-American Commission on Human Rights (IACHR) exposed serious flaws in the government’s investigation into the enforced disappearance of 43 students from Ayotzinapa, Guerrero, refuted key conclusions made by the Attorney General’s Office, and called on authorities to pursue fresh lines of investigation. The government subsequently agreed to extend the group’s mandate to monitor the investigation for an additional six months. At time of writing, more than a year after the disappearances, the whereabouts of at least 41 of students remain unknown.

Other continuing problems include restrictions on press freedom and limits on access to reproductive rights and health care.

Since 2006, Mexico’s security forces have participated in widespread enforced disappearances.

In August 2014, the government publicly acknowledged that the whereabouts of over 22,000 people who had gone missing since 2006 remained unknown. That number has increased to more than 25,500, according to the National Registry of Disappeared or Missing Persons, which was established by law in 2012. Prosecutors and police routinely fail to carry out basic investigative steps to identify those responsible, often telling the missing people’s families to investigate on their own.

Only two of the 43 students from a teachers’ college in Ayotzinapa, Guerrero, who were disappeared in September 2014, have been identified among the remains that the Attorney General’s Office reports having found. As of August 2015, more than 100 people had been charged for their alleged involvement in the incident, but no one had been convicted at time of writing.

In September, the IACHR expert group convened to evaluate the government response to the incident issued its final report, concluding that the investigation had been marred by the mishandling and possible destruction of key evidence.

The federal government has pursued potentially promising initiatives to find people who have gone missing, but they have produced limited results. In 2013, it created a unit in the Attorney General’s Office to investigate disappearances. When consulted in August, officials from the Attorney General’s Office said they did not know of a single case in which someone had been convicted for an enforced disappearance committed since 2007.

In April, the legislature approved a constitutional reform that requires the federal legislature to pass general laws on enforced disappearance and torture, which will establish a single nationwide definition for each of the crimes and facilitate their prosecution in all 31 states and Mexico City.

Unlawful killings of civilians by Mexican security forces “take place at an alarmingly high rate” amid an atmosphere of “systematic and endemic impunity,” according to the United Nations special rapporteur on extrajudicial, summary, or arbitrary executions in 2014.

In January 2015, at least eight civilians were killed at Apatzingán, Michoacán after federal police broke up a demonstration involving citizen self-defense groups. Eyewitnesses reported that federal police opened fire on unarmed civilians, shot two of them in the head while they lay on the ground taking cover, and planted guns next to their corpses. At time of writing, the federal investigation was continuing.

In May, a shootout between federal police officers and civilians in Tanhuato, Michoacán left 42 civilians and one police officer dead. While the federal police commissioner at the time told media that officers were responding in self-defense to civilian gunfire, Human Rights Watch received reports that at least four people were extrajudicially executed after the initial confrontation was over. Federal prosecutors did not open an investigation into the matter until three months after the deadly incident.

Mexico has relied heavily on the military to fight drug-related violence and organized crime, leading to widespread human rights violations by military personnel. Since 2006, the National Human Rights Commission (CNDH) has received about 9,000 complaints of abuse by the army—including more than 1,700 during the current administration—and issued reports in over 100 cases in which it found that army personnel had committed serious human rights violations.

At time of writing, no military personnel had been convicted in connection with the killing of 22 civilians by soldiers in Tlatlaya, state of Mexico, in November 2014, where witness accounts and a report by the CNDH said that at least 12 civilians were extrajudicially executed by soldiers. According to the CNDH, state prosecutors sought to cover up military wrongdoing by using torture to coerce false testimony from witnesses.

In the state of Zacatecas, three soldiers and a colonel were detained in July for the disappearance of seven people who were subsequently found dead. The four were charged with seven counts of homicide and enforced disappearance and will be tried in civilian courts.

Torture is widely practiced in Mexico to obtain forced confessions and extract information. It is most frequently applied in the period between when victims are arbitrarily detained and when they are handed over to civilian prosecutors, a period in which they are often held incommunicado at military bases or illegal detention sites.

Common torture techniques include beatings, waterboarding, electric shocks, and sexual abuse. In 2014, the Federal Attorney General’s Office received more than 2,400 complaints of torture, more than double the number (1,165) received in 2013. Despite a constitutional prohibition on using evidence obtained through torture, some judges continue to disregard torture complaints and accept allegedly coerced confessions.

The criminal justice system routinely fails to provide justice to victims of violent crimes and human rights violations. Causes of this failure include corruption, inadequate training and resources, and the complicity of prosecutors and public defenders with criminals and abusive officials.

In 2008, Mexico passed a constitutional reform to transform its inquisitorial, written justice system to an adversarial, oral one by 2016. Implementation of the reform has been sluggish. As of August, the new oral system was fully operational—at both the federal and local level—in only two Mexican states.

In 2013, Mexico enacted a federal Victims Law intended to ensure justice, protection, and reparations for victims of crime. As of August 2015, the federal district and 9 of 31 states had not yet enacted implementing legislation in compliance with the Victims Law. Only 10 states had created a state victim’s commission, and only five were fully operational.

In April, the Supreme Court ruled that the arraigo provision—which allows prosecutors, with judicial authorization, to hold organized crime suspects for up to 80 days before they are charged—is constitutional in cases of “serious crimes,” as defined by Mexican law.

The failure of law enforcement has contributed to the emergence of armed citizen self-defense groups in several parts of the country.

Following concerns about some groups’ unregulated security actions, self-defense groups in Michoacán state signed an agreement with the government in 2014 stipulating that their members would register their weapons and incorporate into local security forces. At time of writing, there had been no independent assessment of how the agreement was implemented or whether it complied with security force vetting requirements.

Journalists, particularly those who report on crime or criticize officials, face harassment and attacks. According to the Special Prosecutor’s Office for Crimes against Freedom of Expression, 103 journalists were killed and 25 were disappeared between 2000 and October 2015.

In 2012, Mexico enacted a law to protect human rights defenders and journalists, resulting in the creation of a national protection mechanism. Protective measures, however, have been slow to arrive or insufficient in some cases. At time of writing, authorities had yet to bring charges under the law against anyone believed to be responsible for threats or attacks against human rights defenders.

In August, photojournalist Ruben Espinosa was found dead in a Mexico City apartment with four female victims, including human rights defender Nadia Dominique Vera Perez, all of whom had been tortured before being killed with a single gunshot to the head, according to media reports. Espinosa reportedly had fled from Veracruz, the state with the highest combined number of killings and disappearances of journalists in Mexico. At time of writing, the investigation into the killings was being led by local authorities rather than by the Special Prosecutor’s Office.

Mexican laws do not adequately protect women and girls against domestic and sexual violence. Some provisions, including those that make the severity of punishments for some sexual offenses contingent upon the “chastity” of the victim, contradict international standards.

In 2008, the Supreme Court affirmed the constitutionality of a Mexico City law that legalized abortion in the first 12 weeks of pregnancy. No other states have laws permitting voluntary abortion.

In 2010, the Supreme Court ruled that all states must provide emergency contraception and access to abortion for rape victims. However, in practice many women and girls face serious barriers to accessing abortions after sexual violence, including inaccurate information and intimidation by officials.

Same-sex marriage has been legal in Mexico City since 2010 and has since been legalized in the states of Coahuila and Quintana Roo. In June, the Supreme Court ruled that the definition of marriage as a union only between a man and a woman constitutes discrimination and thus violates Mexico's constitution, opening the door for the recognition of same-sex marriage in all 31 Mexican states.

The Mexican government took a number of important steps to implement legal provisions to improve access to palliative and end-of-life care. In June, it introduced a new system for prescribing and dispensing strong pain medicines that will significantly improve health care for people with advanced illnesses. At time of writing, 29 of 31 states had at least one health facility providing palliative care, up from 24 in 2014.

Despite these significant strides, challenges remain, including the continuing paucity of facilities offering palliative care: in many states, only one hospital does so, leaving most patients without access to palliative care close to or in their homes.

A January investigation by Disability Rights International revealed that Mexican women with psychosocial disabilities are at high risk of being denied their reproductive rights, with state-run clinics in Mexico City in some cases pressuring such women into being sterilized or, when they become pregnant, undergoing an abortion.

In July, a Disability Rights International report exposed the inhumane conditions of Mexico City’s government-funded facilities for people with disabilities. One institution locks children with disabilities in cages. Despite a government “black list” of institutions considered abusive or in very bad condition, they continue to operate and receive government funding. The Ministry for Social Development has called for an immediate ban on restraints and cage beds.

Since 2007, the United States has allocated over US$2 billion in aid to Mexico through the Mérida Initiative to help combat organized crime. Fifteen percent of select portions of the assistance can be disbursed only after the US secretary of state reports that the Mexican government is meeting human rights requirements. In an unprecedented move, the State Department announced in October that it was withholding $5 million in Mérida aid because it was unable to confirm that Mexico had met the human rights criteria.

In March, a Group of Independent Experts appointed by the IACHR began providing technical assistance to strengthen the search for the students from Ayotzinapa who were disappeared. In October, the government and the IAHCR signed an agreement to extend the mandate of the expert group for an additional six months.

In March, the UN special rapporteur on torture and other cruel, inhuman, or degrading treatment or punishment presented a report affirming that “torture is generalized in Mexico” and that those responsible are rarely brought to justice. The Peña Nieto administration responded by publicly denouncing the special rapporteur as “irresponsible and unethical.”