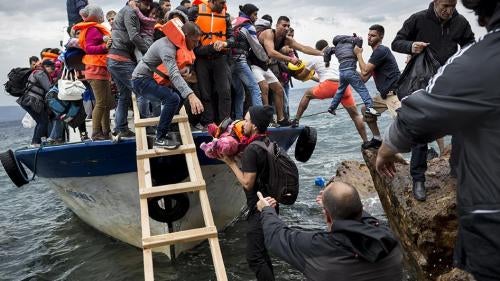 Between January 1 and the end of November 2015, more than 886,000 people reached the EU via the Mediterranean, a significant increase over previous years. More than 3,500 people died or went missing in the same period while making the journey. Arrivals to Greece via Turkey across the Aegean Sea now far outstrip crossings via Libya to Italy. From Greece, a debt-stricken country unable to cope with the influx, many travel overland through the Western Balkans to reach other EU countries. The land route contains its own perils, including blocked border crossings, summary expulsions and police abuse.

Over 80 percent of those taking the dangerous journey originate from countries beset by war, generalized violence, or with repressive governments, such as Syria, Eritrea, Somalia, Afghanistan, and Iraq. The EU continues to emphasize preventing departures and combating smuggling over a coordinated approach based on access to protection and respect for human rights including through problematic cooperation with Turkey and other transit countries.