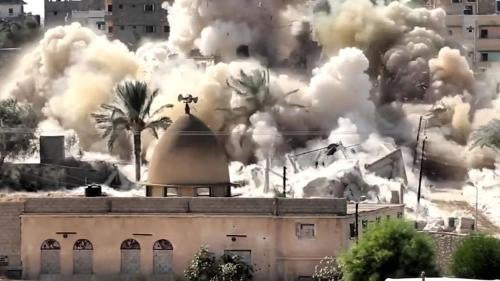 In the northern Sinai Peninsula, fighting between the government and an affiliate of the armed extremist group Islamic State (also known as ISIS) escalated, despite Egypt’s commitment of significant additional forces. The government claimed that the army killed thousands of “terrorists” in the Sinai but allowed no independent observers into the conflict area, and residents said the army had killed an unknown number of civilians.

The authorities continued to restrict freedom of expression and association by investigating independent nongovernmental organizations (NGOs), arresting people suspected of being gay or transgender, and prosecuting those accused of defaming religion. 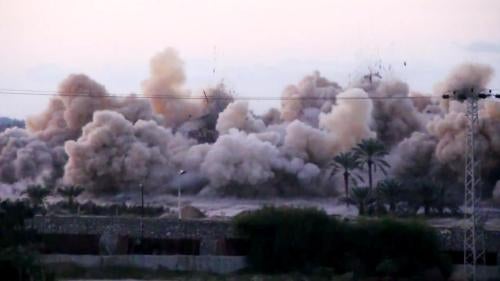 A constellation of insurgent groups throughout Egypt, including the ISIS affiliate known as Sinai Province, escalated their attacks dramatically from an average of 30 per day throughout 2014 to 100 per day between January and August 2015, according to the Washington, D.C.-based Tahrir Institute for Middle East Policy. Though civilians were rarely the target of attacks, in 2015 they were killed at three times the rate of the previous year, the Tahrir Institute found. A June 29 car bombing in Cairo killed General Prosecutor Hisham Barakat, the first high government official to be assassinated since 1990.

The Egyptian government said that its counterterrorism operations in North Sinai killed at least 3,091 “terrorists” between January and July 2015. The government did not allow independent observers into the area of fighting and did not acknowledge any civilian deaths in the Sinai. In September, Egyptian security forces killed 12 civilians, including eight Mexican tourists, in the Western Desert region after apparently mistaking their sightseeing convoy for ISIS fighters. Prosecutors investigating the incident imposed a media gag order four days later.

Between October 2014 and August 2015, the armed forces demolished 2,715 buildings and evicted thousands of families on the border with the Gaza Strip, violating human rights law and possibly the laws of war. The government claimed that a “buffer zone” there would eliminate the smuggling of weapons and fighters from Gaza.

Al-Sisi—who governed in the absence of a parliament for most of the year—issued a counterterrorism law in August that gave prosecutors greater power to detain suspects without judicial review and to order wide-ranging and potentially indefinite surveillance of terrorist suspects without court orders. The law authorized a US$64,000 fine and possible one-year work ban for anyone who publishes news regarding terrorism that contradicts the Defense Ministry’s official statements.

On July 1, a special police unit acting on information from the Interior Ministry’s National Security Agency raided an apartment in a Cairo suburb and killed nine Brotherhood officials. The government claimed the nine belonged to a “special operations committee” and died in a shootout, but relatives said the men did not carry weapons, and Human Rights Watch found that the deaths may have constituted extrajudicial executions.

The National Security Agency banned scores of Egyptians—including activists, politicians and academics—from traveling. It did so with little or no oversight from judges or prosecutors and did not provide those who were banned with any way of challenging the decision, violating the fundamental international right to freedom of movement.

Police regularly used torture in their investigations. A January 2015 report by an Egyptian human rights law firm said its lawyers had interviewed 465 alleged victims of police torture and ill-treatment between October 2013 and August 2014 and filed 163 complaints to prosecutors, of which only seven reached the courts.

On June 11, an Egyptian court sentenced a lieutenant in the Central Security Forces to 15 years in prison for the killing of Shaimaa al-Sabbagh, a member of a socialist political party shot dead when police dispersed a small protest in a downtown Cairo square on January 24. The verdict in al-Sabbagh’s case marked the first time since Morsy’s ouster in July 2013 that a law enforcement officer in Egypt received a prison sentence for killing a protester, despite hundreds of such deaths.

At time of writing, no government official or member of the security forces had been charged for the killing of at least 817 protesters in Cairo’s Rab’a al-Adawiya Square on August 14, 2013—a likely crime against humanity. On August 13, a court halved a 10-year prison sentence handed to a police officer who participated in the tear gas suffocation of 37 people whom police had arrested from Rab’a Square.

In October, the Interior Ministry announced that nearly 12,000 people had been arrested on terrorism charges in 2015, adding to the 22,000 people security officials said had already been arrested as of July 2014. The actual number is likely higher; the Egyptian Center for Economic and Social Rights documented more than 41,000 arrests, indictments, or sentencings between July 2013 and May 2014.

On September 23, al-Sisi pardoned 100 prisoners, including youth activists–some in poor health–and Al Jazeera journalists Mohamed Fahmy and Baher Mohamed, but many political prisoners did not receive pardons, including Ahmed Maher and Mohamed Adel, founders of the April 6th Youth Movement; Mahienour al-Masry, a human rights lawyer from Alexandria; and at least 18 journalists, including photographer Mahmoud Abu Zeid, whom police arrested in August 2013 and whose trial began in December.

The Egyptian Coordination for Rights and Freedoms, an independent group, documented 47 deaths in custody between January and June and said in an October report that 209 detainees had died due to medical negligence since al-Sisi took office in June 2014.

On June 16, a criminal court sentenced Morsy and 114 others to death in two related cases based almost entirely on the testimony of security officials, who claimed that Morsy and the Brotherhood had conspired with Hamas and Hezbollah to break out of prison during the 2011 uprising and had killed police officers in the process. Human Rights Watch found that prosecutors presented no evidence to substantiate the security officials’ testimony and that the case appeared to be politically motivated.

Since Morsy’s removal, courts have handed down at least 547 initial death sentences in cases connected to political violence, most involving Brotherhood members. Nearly all those sentences remained on appeal in 2015. The state carried out one execution in a case of political violence in March and executed another six men–accused of belonging to a militant cell and killing army officers in a shootout–in May following an unfair military trial.

Mass trials also involved those not belonging to the Brotherhood. In February, a judge sentenced activist Ahmed Douma, women’s rights defender Hend al-Nafea, and 228 others to life in prison for participating in a December 2011 protest.

Between January and September 2015, authorities charged or sentenced at least 3,164 people–most of them alleged Brotherhood members–in military courts.

Freedom of Association, Expression, and Assembly

The government did not follow through on a November 2014 ultimatum to force independent NGOs to register under an onerous 2002 law but increased pressure on such groups. In June, government investigators visited the office of the Cairo Institute for Human Rights Studies and asked for registration and financial documents. National Security agents banned Mohamed Lotfy, executive director of the Egyptian Commission for Rights and Freedoms, from travel to Germany in June to attend a roundtable at the German Parliament.

In February and March, courts handed prison sentences to two men, who later went into hiding, for allegedly supporting atheism online. In June, prosecutors in Beni Suef governorate ordered a local man arrested for allegedly posting cartoons online that insulted the prophet Mohamed. In October, an appeals court upheld a five-year sentence against TV presenter Islam al-Behery for contempt of religion, but al-Behery appealed the ruling to a higher court.

In June, the Egyptian Initiative for Personal Rights, an independent group, released a study documenting 51 sectarian attacks since the 2011 uprising that were resolved through “customary reconciliation,” an extrajudicial process sponsored by the security services that does not abide by Egyptian law and often allows the security services to impose conditions on Coptic Christians.

Violence and Discrimination against Women

On January 26, an Egyptian court for the first time issued a conviction for female genital mutilation (FGM), which remains widely practiced despite being made illegal in 2008. The court sentenced the doctor to two years in prison for manslaughter and the father to a three-month suspended sentence.

In January, a court acquitted 26 men who had been accused of debauchery in connection with a raid on a bathhouse allegedly used by gay men, but in February, morals investigators arrested seven allegedly transgender people who had met at a Cairo club to celebrate a friend’s birthday. Police also arrested two allegedly transgender people on prostitution charges in May and 11 allegedly gay men, also accused of prostitution, in September.

Egypt was home to 236,090 refugees and 25,631 asylum seekers as of December 2014, the most recent date for which the United Nations High Commissioner for Refugees (UNHCR) provided figures. About 130,000 of those refugees were Syrians, UNHCR said. Egypt has yet to develop national asylum procedures and institutions, and the country’s political strife puts refugees and asylum seekers at risk of arbitrary arrest, deportation and harassment, according to UNHCR.

On several occasions, Egyptian security forces fired on refugees attempting to embark from the country’s northern coast on smuggling boats across the Mediterranean Sea. In August, an 8-year-old girl, thought to be Syrian, was reportedly killed in one such incident.

About 3,000 to 4,000 Palestinian refugees from Syria who fled the country since 2011 remained in Egypt as of September, according to UN sources.

In March, the United States announced it would resume the delivery of major military equipment that it had placed on hold after Morsy’s removal. The decision allowed the US to send 12 F-16 fighter jets, 20 Harpoon missiles, and 125 M1A1 tank kits. The US earlier delivered 10 Apache helicopters in December 2014 to aid Egypt’s counterterrorism efforts. But President Barack Obama announced that he would end Egypt’s ability to buy US equipment on credit and restrict military aid to four sectors—Sinai Peninsula, counterterrorism, border security, and maritime security—beginning in 2018.

In August, the US held its first strategic dialogue with Egypt since 2009. Following the meeting in Cairo, Secretary of State John Kerry said that Egypt and the US were returning to a “stronger base” but that he had been “crystal clear” on human rights concerns and had raised the issue of radicalization “that can take place through imprisonment.”

Over the course of the year, al-Sisi visited Berlin, Paris and London. In July, France began delivery of 24 Rafale fighter jets that Egypt purchased in February. In September, Egypt bought two Mistral class French warships—some of the most advanced in any Middle Eastern navy.

In March, Egypt joined the Saudi Arabia-led military intervention in Yemen’s conflict, sending four warships to the Gulf of Aden. The extent of Egypt’s troop commitment to the intervention remained unclear, and the military denied deploying ground forces.

In February, an ISIS affiliate in Libya beheaded 20 Egyptian Coptic Christians whom it had abducted over the prior two months. Egypt responded by launching air strikes against ISIS-affiliated forces in Derna that killed at least seven civilians.