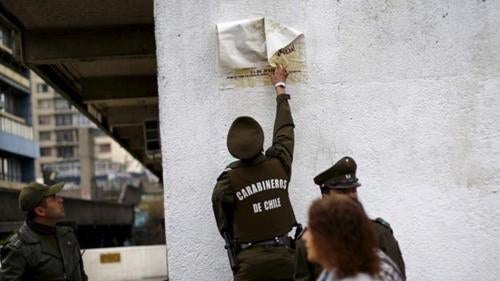 Chile’s parliament in 2015 debated laws to strengthen human rights protection, as promised by President Michelle Bachelet, but none had been enacted at time of writing. These included measures to reform Chile’s counterterrorism law and to decriminalize abortion in limited circumstances. Other long-needed reforms, however, including an expected bill to end the jurisdiction of military courts over human rights abuses by the Carabineros—the police responsible for public order and crime prevention—had not been introduced as of November.

While courts continue to prosecute individuals for abuses committed during military rule, the Supreme Court has used its discretionary powers in many cases to reduce sentences against human rights violators, resulting in punishments incommensurate with the gravity of the crimes.

In March 2015, the chief justice reported that 1,056 cases of human rights violations committed during military rule (1973-1990) were under investigation, 112 of them for torture. According to the Ministry of the Interior’s human rights program, as of December 2015, 344 individuals had received final sentences for human rights violations, including killings and enforced disappearances. One hundred and seventeen were serving prison sentences.

While some individuals convicted of extrajudicial executions initially receive long prison sentences, the Supreme Court’s criminal chamber has in many cases reduced the penalties on final appeal on the basis that the time elapsed since the crime justifies a lesser, or even a non-custodial, sentence. Two of the five judges on the panel have consistently dissented from this position.

In addition, the prison service and appeals courts have granted benefits such as day release and parole to individuals convicted of crimes against humanity, which the Supreme Court has upheld.

Gen. Manuel Contreras, who commanded Pinochet’s secret police, the DINA, died in a military hospital in August 2015. Contreras was responsible for summary executions, enforced disappearances, and torture that claimed thousands of victims during the early years of the dictatorship. At the time of his death, he was serving accumulated sentences of 529 years, and other cases against him were pending.

Secrecy continues to cast a shroud over past human rights crimes. The problem was dramatically demonstrated in 2015 following the publication of a former soldier’s testimony that an officer had set fire to two teenagers, Rodrigo Rojas and Carmen Gloria Quintana, after their detention during a 1986 street protest. Rojas died of his injuries in hospital; Quintana was left permanently disfigured after multiple operations for her burns.

The official version, based on military witnesses who allegedly had been instructed and intimidated, was that the victims had accidentally burned themselves with a Molotov cocktail. In November 2014, a former soldier testified that a patrol commander had ordered them to be doused with gasoline and set on fire, confirming Quintana’s account of what happened. Based on this testimony, in July 2015 Judge Mario Carroza charged 12 former soldiers with first degree murder.

In August, the minister of defense formed a human rights unit, headed by a former judge, to coordinate and facilitate military cooperation in cases under judicial investigation.

A bill presented by the government in November 2014 to replace Chile’s counterterrorism law was still under discussion in the Senate at time of writing. The current law lacks sufficient due process protections, and its definition of terrorism is overly broad. The 2014 bill would update and narrow the definition of terrorism, excluding crimes against private property, which had previously formed the basis for terrorism prosecutions of Mapuche indigenous activists. It would also strengthen due process guarantees, giving defense attorneys the right to be informed of the identity of protected witnesses, question them about their evidence, and probe their credibility.

Military courts continue to exercise jurisdiction over abuses committed by the uniformed police, the Carabineros. Criminal proceedings in military courts lack the independence and due process guarantees of ordinary criminal proceedings. Investigations are secret, the proceedings are conducted mainly in writing, and lawyers have limited opportunities to cross-examine witnesses.

Many legitimate complaints of human rights abuses that are filed with military courts are dismissed. Sentences are often inappropriately reduced by the military appeals court. Both the Constitutional Court and the Supreme Court have opposed military jurisdiction in such cases.

In May 2014 the minister of defense promised to present draft legislation before the end of June 2015 that would overhaul the military criminal code and end military jurisdiction over crimes committed against civilians by the armed forces (including Carabineros). At time of writing, the bill had still not been presented.

In May 2015, a student, Rodrigo Avilés, was knocked off his feet by a police water cannon and severely injured when his head struck the sidewalk during a street protest in Valparaíso. The Carabineros initially denied responsibility, but after a video on state television showed Avilés being hit by a jet of water fired by police at short range, the Carabineros dismissed the officer responsible. They also announced that disciplinary action would be taken against two officers shown in a video to have struck a teenage girl without provocation during the same demonstration, leaving her unconscious on the ground.

Appeals courts have repeatedly called on the Carabineros to observe strict protocols on the use of force when entering Mapuche indigenous communities in the context of land conflicts in southern Chile. In February 2015, the Supreme Court ordered the Carabineros to respect the right to liberty and personal security (amparo) of three Mapuche teenagers who were allegedly pursued, detained, and beaten by police in October 2014. Cases of brutality and the disproportionate use of force, however, continue to be reported. Women and children have been among the victims of these abuses.

Torture by police and prison guards is a recurrent problem. Following Supreme Court rulings against military jurisdiction over alleged abuses by Carabineros, some cases were, at time of writing, under investigation by civilian prosecutors and were expected to be heard by civilian courts. Chile’s criminal code still lacks a specific reference to torture as defined in international instruments. President Bachelet promised in her state of the nation address in May 2015 to present a bill to rectify this.

Despite measures adopted in 2010-2013 to reduce the prison population, many of Chile’s prisons are still grossly overcrowded. Conditions remain poor, and violent abuses by prison guards are common. A survey of more than 2,000 prisoners conducted in 2013 by the Gendarmería, the Chilean prison service, revealed that more than a third claimed to have suffered violence from prison guards and more than a fifth said that they had been tortured. In January 2015, 18 prison guards were given suspended sentences of 61 days for beating a group of 57 prisoners in Rancagua prison following an escape attempt.

Chile is one of four countries in Latin America (the other three being El Salvador, Honduras, and Nicaragua) with an absolute prohibition on abortion, even in the event of medical necessity or rape. In January 2015, President Bachelet presented legislation to decriminalize abortion in cases of rape or fetal unviability, or where there was a risk to the life of the woman or girl.

In August, the Chamber of Deputies’ Health Committee approved the legislation in principle, the first stage of the parliamentary approval process. However, the bill was opposed by the Catholic Church, which exercises great influence in Chile, by sectors of the Christian Democrat Party, and by legislators of the opposition Alliance for Chile, who said they would challenge the bill in the Constitutional Court.

A “civil union” bill presented by former President Sebastián Piñera in 2011 that provides legal recognition and protection for same-sex couples became law in April 2015 and went into effect in October. Another bill tabled by five senators from different parties in May 2013 to achieve legal recognition of the gender identity of transgender people was under discussion in the human rights committee of the Senate at time of writing.

In April 2015, three opposition members of the Chamber of Deputies presented a motion proposing that the chamber ask the Supreme Court to dismiss the director of the National Human Rights Institute (INDH), Lorena Fries, for “manifest and inexcusable negligence.” Their action followed a complaint by the chief of police about a school text on human rights distributed by INDH, which argued that Carabineros made numerous arrests during street protests in part to deter marchers from exercising their freedom of assembly.

The questioned passage was supported by official statistics showing that the number of arrests in demonstrations far outnumbered the individuals actually charged with an offense. After hearing Fries’ defense, the Chamber of Deputies in June rejected the dismissal request by a two-to-one margin. The dismissal request and chamber vote—a disproportionate reaction to the INDH’s criticism of the police—showed the agency’s vulnerability to political reprisals.

In July 2015, the UN Committee on Economic, Social and Cultural Rights published its concluding observations on Chile’s fourth periodic report to the committee. The committee called on Chile to strengthen its legislation against discrimination and to increase the resources provided to the INDH. It also recommended that Chile expedite adoption of the pending abortion bill and consider broadening the circumstances in which abortion is permitted to ensure the bill’s compatibility with women’s right to health and life.

Also in July, the UN special rapporteurs on freedom of assembly and association, freedom of opinion and expression, and human rights defenders sent a joint letter to Chile’s ambassador to the UN expressing concern at the action taken by legislators against the INDH’s director.

In May, Chile endorsed the global Safe Schools Declaration, committing to do more to protect students, teachers, and schools during times of armed conflict, including by implementing the Guidelines on Protecting Schools from Military Use.