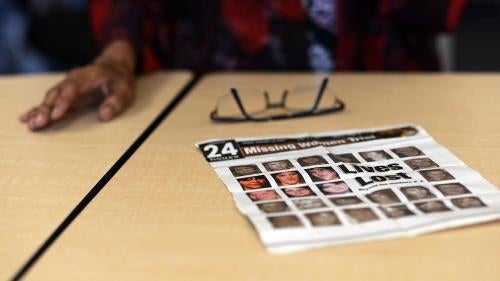 Canada’s global reputation as a defender of human rights was tarnished by the failure of the Stephen Harper government, in power until October, to take essential steps to remedy serious human rights problems. Particular areas of concern include the rights of indigenous peoples, the legal status of sex work, restrictive counterterrorism measures, the impact of Canada’s extractive and garment industries abroad, and the rights of asylum seekers and migrants.

Violence against Indigenous Women and Girls
Growing public concern over missing and murdered indigenous women and girls has led to numerous calls from provincial leaders, opposition political parties, civil society, and in 2015, two United Nations committees, for a national inquiry into the violence.

The UN Committee on the Elimination of Discrimination against Women concluded that Canada had committed a “grave violation” of the rights of indigenous women by failing to promptly and thoroughly investigate the high levels of violence they suffer. The committee also called attention to their mistreatment by the police, an issue that Human Rights Watch documented in its 2013 report Those Who Take Us Away.

The UN Human Rights Committee expressed similar concern over the violence facing indigenous women and girls, as well as Canada’s failure to provide adequate and effective responses. Both UN committees recommended that Canada conduct a national inquiry to address the issue, a recommendation the Harper government rejected but which the newly elected Liberal government of Justin Trudeau has pledged to implement.

In October 2015, eight police officers of the Sûreté du Québec (Quebec Provincial Police) faced suspension over allegations of abuse of indigenous women in the mining city of Val-d’Or. At time of writing, the province had no plans for an independent civilian investigation of the allegations, but had appointed a civilian auditor to oversee an investigation by the Montreal police, a separate municipal organization.

Rights of Indigenous Peoples
During the 19th and 20th century, approximately 150,000 indigenous children were removed from their families and communities and placed in residential schools, where they were forbidden to speak their own languages or practice their culture. Many also suffered physical and sexual abuse.

In 2015, the Truth and Reconciliation Commission, mandated to provide former students and others affected by residential schools with an opportunity to share their experiences, found that the Canadian government pursued a policy of “cultural genocide” using residential schooling as a central element. According to the commission, the government’s goal was to divest itself of its legal and financial obligations to indigenous peoples and to gain control over their land and resources.

The commission made a number of recommendations to uphold indigenous peoples’ rights and to promote reconciliation. The UN Human Rights Committee subsequently endorsed the recommendations in 2015, but the Harper government did not accept them.

Indigenous groups have criticized Canada for failing to respect land agreements with indigenous communities or to consult adequately with them, including with regard to resource extraction plans on traditional lands. The government has yet to pay adequate attention to severe poverty, housing, water, sanitation, healthcare, and education problems in indigenous communities, particularly those in remote and rural areas. Inadequate access to clean, safe drinking water continues to pose a major public health concern in a number of indigenous communities.

Sex Work
Following the 2013 ruling by the Supreme Court of Canada striking down previous restrictions that the court deemed violated the rights and security of sex workers, the parliament in December 2014 passed the Protection of Communities and Exploited Persons Act, which criminalizes communicating for the purposes of selling sexual services in public, or buying, advertising, or benefitting from the sale of sexual services. As sex workers, researchers, and human rights groups outlined in testimony before parliament, the act severely limits sex workers’ abilities to take life-saving measures, such as screening clients. Criminalizing communication disproportionately impacts street-based sex workers, many of whom are indigenous, poor, or transgender, forcing them to work in more dangerous and isolated locations.

Counterterrorism
In June 2015, Canada passed the Anti-Terrorism Act, a law that imperils constitutionally enshrined human rights, including the freedoms of expression and association.

Vague and overbroad provisions in the law empower the Canadian Security Intelligence Service to engage in operations that could disrupt legitimate acts of dissent and even violate Canada’s Charter of Rights and Freedoms with virtually no oversight. The law’s authorization of unfettered information-sharing among 17 government agencies invites violations of rights to privacy and procedural protections to prevent torture and ill-treatment. The act also denies meaningful due process to persons placed on Canada’s no-fly list and to non-citizens facing deportation. Its new criminal offense of “advocating terrorism” could undermine free speech. It also significantly lowers the threshold and lengthens the period for detaining a suspect without charge.

The UN Human Rights Committee expressed similar concerns about the act, calling on Canada to refrain from adopting legislation that imposes undue restrictions on the exercise of civil and political rights.

Mining Industry Abuses
Canada is the mining industry’s most important global financing hub, home to a majority of the world’s mining and exploration companies. These firms have an enormous collective impact on the human rights of vulnerable communities worldwide. Yet the Canadian government neither regulates nor monitors the human rights practices of Canadian mining companies at work abroad.

In 2013, Human Rights Watch documented allegations that Vancouver-based Nevsun Resources’ flagship Bisha gold mine in Eritrea was partly built using forced labor deployed by the local state-owned contractor Segen Construction. The following year, three Eritreans filed a lawsuit against Nevsun in a Canadian court, alleging that the company was complicit in the use of forced labor by Segen at the Bisha mine. The plaintiffs claim that they worked at the mine against their will, that they were forced to work long hours, and that they lived in constant fear of threats of torture and intimidation.

In 2015, the UN Commission of Inquiry on Human Rights in Eritrea reported that it had collected evidence that most workers at the Bisha mine were in fact conscripts performing their national service. Nevsun has rejected all of these allegations.

In 2011, Human Rights Watch documented widespread violent abuses, including brutal incidents of gang rape, carried out by employees of Canadian mining giant Barrick Gold at the Porgera gold mine in Papua New Guinea. The company has taken numerous steps to prevent further abuses and in 2015 provided remedy packages to more than 100 women who suffered abuse at the hands of company employees. The company has commissioned an independent assessment to evaluate the extent to which that program conformed to international norms and positively impacted the women involved.

In 2015, the UN Human Rights Committee called on Canada to enhance the effectiveness of existing mechanisms to ensure that Canadian corporations respect human rights standards when operating abroad, to consider establishing an independent mechanism with powers to investigate human rights abuses by such corporations abroad, and to develop a legal framework that affords legal remedies to victims.

Garment Industry Abuses
Canada is among the top four markets for garments and textiles from Cambodia, where garment workers often work in discriminatory and exploitative labor conditions. Workers, who are mostly young women, have trouble asserting their rights, and labor under short-term contracts that make it easier to fire and control them, with poor government inspections and enforcement and aggressive tactics against independent unions.

Canadian clothing brands have a responsibility to promote respect for workers’ rights throughout their supply chains, including both direct suppliers and subcontractor factories. As documented in the 2015 Human Rights Watch report Work Faster or Get Out, not all Canadian companies have fully lived up to these responsibilities.

In spite of abuses, Canada has not introduced regulations to provide incentives or require international apparel brands domiciled in Canada to make non-financial, human rights-related disclosures, such as the names of their suppliers and subcontractors, to facilitate labor rights compliance throughout the supply chain.

Asylum Seekers’ and Migrants’ Rights
In 2012, parliament passed Bill C-31, which permits the government to designate a group of incoming migrants as “irregular arrivals,” subjecting them to mandatory detention with limited judicial review and risking the prolonged detention of refugees and children 16 and older. Bill C-31 created a Refugee Appeal Division, but asylum seekers from 27 “designated countries” that have a history of respecting human rights are not allowed to appeal their denials, although the Federal Court may review their denials. C-31 also places a five-year ban on “irregular arrivals” from applying for permanent residence, which impinges upon the right of separated refugee families to reunite.

In July, the Federal Court held that denying applicants from “designated countries” the right to appeal a rejected claim violates equality rights under Canada’s Charter of Rights and Freedoms. Three people had challenged the constitutionality of the policy: a gay man from Croatia and gay partners from Hungary, who all feared persecution based in part on their sexual orientation. The government is appealing the decision.

Also in 2012, Canada modified the Interim Federal Health Program to limit access to essential healthcare services to many asylum seekers, a decision that a Canadian court subsequently declared a form of “cruel and unusual treatment,” and thus unconstitutional. In response, the federal government introduced a temporary health program providing partial health care coverage for some refugees.

In 2015, the UN Human Rights Committee urged Canada to refrain from detaining “irregular migrants” for indefinite periods, to ensure that detention is used as a measure of last resort, and to provide refugee claimants from “designated countries” with access to an appeal. The committee further recommended that Canada reinstate essential healthcare services to all refugee claimants, irrespective of their status.