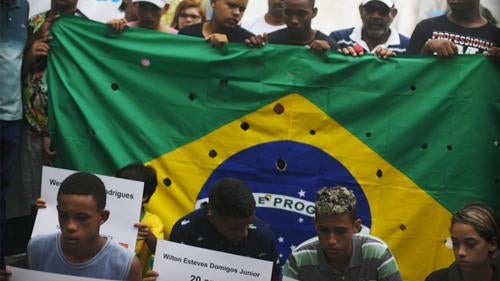 Chronic human rights problems plague Brazil, including unlawful police killings, prison overcrowding, and torture and ill-treatment of detainees. Some recent efforts to reform the criminal justice system aim to address these problems, but others would exacerbate them.

The judiciary in 2015 worked with state governments toward ensuring that detainees are promptly brought before judges after their arrest, as required by international law. But in August, the Chamber of Deputies approved a constitutional amendment that would allow 16- and 17-year-old children to be prosecuted as adults for serious crimes, in violation of international standards. At time of writing, enactment of the amendment still required two additional votes by the Senate.

Internationally, Brazil continued to lead efforts to strengthen protections for the right to privacy in 2015, but its overall record at the United Nations Human Rights Council (HRC) was mixed. Between 2010 and 2015, the number of refugees admitted in the country doubled, reaching a total of 8,400 people.

Police routinely report these deaths as the result of shootouts with criminals. While some of these killings result from legitimate use of force, others do not, as Human Rights Watch and other groups have reported and Brazilian criminal justice officials have recognized.

Also in Sao Paulo, 3 police officers were detained in connection with the September killing of two 16-year-old children and two 18-year-olds. Police investigators believe that the killings were an act of revenge against the youth for allegedly stealing the purse of the wife of one of the detained officers.

Many Brazilian prisons and jails are severely overcrowded and plagued by violence. The number of adults behind bars jumped 80 percent in the past decade, and in June 2014 it exceeded 600,000 people—over 60 percent more than the prisons were built to hold—according to the latest data from the Ministry of Justice’s Integrated System of Penitentiary Information (InfoPen). 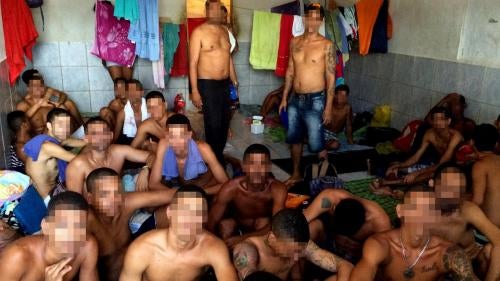 Overcrowding and lack of sufficient staff hinder prison authorities from maintaining control within the prison grounds, leaving inmates vulnerable to violence and gang activity. The crowded conditions also impact prisoners’ health. The prevalence of HIV infection in Brazil’s prisons is 60 times—and of tuberculosis almost 40 times—that of the overall population, according to InfoPen. A lack of adequate medical screening, prevention, and care, along with poor sanitation and ventilation, contribute to the spread of disease among inmates.

With support from the National Council of Justice (known as CNJ, using the Portuguese acronym), which oversees the judicial system, all of Brazil’s states have begun to bring detainees before a judge promptly after arrest, as required under international law, although the programs only apply to certain geographic areas in each state for now. In the absence of those “custody hearings,” detainees may wait many months for a first hearing with a judge, contributing to prison overcrowding.

Maranhao was the first state to begin the practice, in October 2014. According to data published by the CNJ in November 2015, in 50 percent of the custody hearings held in the state, judges determined that pretrial detention was not warranted and ordered the detainees released pending trial. In contrast, when custody hearings were not held, judges ordered pretrial release in only 10 percent of the cases, according to the state´s judiciary. At time of writing, Brazil’s congress was discussing a bill to make custody hearings mandatory throughout the country.

Those hearings also allow judges to detect torture or mistreatment of detainees, a major problem in Brazil. In Rio de Janeiro, almost 20 percent of detainees who had a hearing during the first month of the program said that they had been mistreated by police, according to the state’s Public Defender’s Office.

In March, the National Mechanism for Preventing and Combating Torture started work, designing a plan of action to monitor detention centers. Its 11 members are authorized to conduct unannounced visits to any detention center and to make recommendations to authorities. The mechanism is part of the National System to Prevent and Combat Torture, created by law in August 2013.

In two votes in July and August 2015, the Chamber of Deputies approved a constitutional amendment that would allow 16- and 17-year-old children accused of serious crimes to be tried and punished as adults. The proposal, which would need to be approved by the Senate in two votes to be enacted, would violate international norms calling on states not to prosecute people under 18 as adults.

In July, the Senate passed a bill that would increase the maximum time a child can be confined in a juvenile center from three to 10 years. If approved by the Chamber of Deputies, the bill would aggravate overcrowding. Juvenile centers held close to 22,000 children in 2014, but facilities only had capacity for about 18,000, according to the latest data published by the National Council of the Prosecutor’s Office, which inspects those units.

Freedom of Association and Expression

In October, the Senate approved a counterterrorism bill that contains overbroad and vague language that could be misused to prosecute as terrorists demonstrators and others engaged in dissent. A vote at the Chamber of Deputies was pending at time of writing.

At least seven journalists and bloggers had been killed in 2015 at time of writing. Two were tortured before they were executed. All had reported on corruption or crime and had criticized local politicians. During the past five years, at least 17 journalists have lost their lives in direct relation to their work, according to the Committee to Protect Journalists, an international press freedom group.

Abortion is prohibited except in cases of rape, anencephaly—in which the fetus has a fatal congenital brain disorder—or when necessary to save a woman’s life. In 2015, conservative members of Congress pushed a bill and a constitutional amendment that would eliminate those exceptions by awarding embryo and fetal rights. Both proposals are under discussion in the Constitution, Justice and Citizenship Commission of the Chamber of Deputies.

Women and girls who obtain an abortion illegally face sentences of up to three years in prison, while people who perform abortions face up to four years in prison. Abortions performed in clandestine clinics put women at high risk. For example, Tatiana Camilato, a 31-year-old mother raising three children alone in Rio de Janeiro, died in July 2015 during an unsafe procedure, according to press interviews with her relatives.

In March, the Supreme Court upheld the right of same-sex couples to adopt children, on the basis of the Court’s 2011 approval of same-sex marriage. In 2013, the National Council of Justice ordered all notary publics to register same-sex marriages. But a committee of the Chamber of Deputies was, at time of writing, debating a bill that would define a family as a union between a man and a woman.

The national Human Rights Ombudsman’s Office received 522 complaints of violence and discrimination against lesbian, gay, bisexual, and transgender persons in the first half of 2015.

In December 2014, in response to a petition by a trade group, the Supreme Court ordered the federal government to stop publishing the list of companies penalized by the Ministry of Labor for employing workers in abusive conditions. Local NGOs have been able to get around that order by using the Transparency Law to request that the Ministry of Labor release the data.

Rural activists and indigenous leaders involved in conflicts over land continue to face threats and violence. According to the Pastoral Land Commission, a Catholic NGO, 46 people involved in land conflicts were killed from January to November. Many of those killings, the commission noted, were allegedly ordered or carried out by large landowners or illegal loggers.

For instance, in Mato Grosso do Sul, the Guaraní-Kaiowá people, who are fighting to regain rights to their ancestral land, in 2015 suffered violent attacks by militias linked to landowners, according to the Indigenous Missionary Council of the Catholic Church. A member of that indigenous group was killed in August after a group of landowners arrived at a piece of contested land occupied and claimed by the Guaraní-Kaiowá. At time of writing, the police had not publicly identified any suspect in the killing.

In December 2014, a national truth commission published its final report after more than two years of work investigating human rights violations from the military rule of 1964 to 1985. The commission found that violations were “widespread and systematic” and were planned by officials at the highest level. The report identified 377 individuals responsible for human rights violations, including torture, killings, and enforced disappearances.

The perpetrators of these crimes have been shielded from justice by a 1979 amnesty law. In April 2010, the Supreme Court reaffirmed lower court rulings that the amnesty law barred most prosecutions of state agents involved. Six months later, the Inter-American Court of Human Rights ruled that this interpretation violated Brazil’s obligations under international law.

After an August visit to Brazil, the UN special rapporteur on torture and other cruel, inhuman, or degrading treatment or punishment called on the government to address prison overcrowding and show a “genuine commitment” to combating torture. In September, after a visit to the country, the UN special rapporteur on minority issues urged Brazil to “fulfill promises of equality” for minorities.

In a joint statement issued in November, four UN rapporteurs criticized the counterterrorism bill approved by the Senate, saying that it is “too broadly drafted and may unduly restrict fundamental freedoms.”

Also in November, two UN rapporteurs said the steps taken by the Brazilian government and two mining companies to prevent harm after the collapse of a tailing dam, which contained waste from mining operations, were “clearly insufficient.” The accident killed at least 15 people, left 4 people missing, and released toxic chemicals into the Doce River. Brazil’s government considers it the biggest environmental disaster in the country’s history.

Brazil continued to lead on privacy rights in the digital age, co-authoring with Germany a resolution approved unanimously by the Human Rights Council to appoint a special rapporteur to promote and protect the right to privacy worldwide. Brazil was also a sponsor of Human Rights Council resolutions condemning racism and highlighting the corrosive impact of institutional corruption on human rights.

In May, Brazil endorsed the global Safe Schools Declaration, thereby committing to do more to protect students, teachers, and schools during times of armed conflict, including by implementing the Guidelines on Protecting Schools from Military Use. The 2014 guidelines were developed by representatives from 14 countries as well as human rights and humanitarian organizations.

The number of refugees admitted to Brazil has doubled over the past five years to a total of more than 8,400 in 2015, according to the Ministry of Justice. About a quarter of those admitted since 2011 have been Syrians. Brazil renewed a resolution that facilitated issuing humanitarian visas to Syrian citizens and developed new policies to better respond to the needs of refugees, especially for obtaining identity papers.