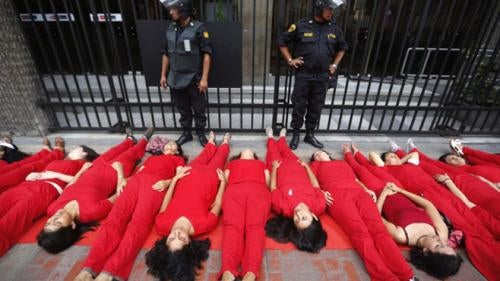 Public protests against large-scale mining projects and other private sector and government initiatives in Peru often lead to confrontations between protesters and police in which civilians are killed or wounded by police or army gunfire. While these confrontations resulted in fewer fatalities in 2013 and 2014 than in 2012, there has been little progress in investigating deaths and injuries, and recent legislation has further weakened police and army accountability.

Judicial investigations into grave human rights abuses committed during Peru’s armed conflict continue, but progress in trials has been slow and limited.

As of September 2014, 34 civilians had been killed during protests since President Ollanta Humala took office in July 2011. During the first nine months of 2014, four civilians died from gunshot wounds when police reportedly used live ammunition against protesters in three separate incidents. In September 2014, 16-year-old Jhapet Huilca was shot by police during a protest against a gas pipeline in Quillabamba, Cusco. The minister of the interior announced the suspension of the police chief responsible for the operation pending an investigation.

There has been little progress in determining the circumstances in which these deaths occurred or holding to account police or military personnel who used force unlawfully. In January 2014, a prosecutor closed without any charges an investigation into the alleged shooting by soldiers of four civilians during a protest in Celendín, Cajamarca, in July 2012, even though he concluded that those responsible had committed intentional homicide. His report revealed that the fatal shots were probably fired from army-issued Galil combat weapons, and that there was no evidence that any of the victims had been armed. His report stated, however, that the army had failed to provide a copy of the operational plan, the names of the participating soldiers, or details of the firearms issued to them, despite being requested to do so, and that it was impossible to identify the perpetrators.

In January 2014, Law 30151 entered into force, providing immunity from prosecution to “armed forces and police personnel who in fulfillment of their duty and using their weapons or other means of defense, cause injury or death.” This amendment to the criminal code eliminated language that made immunity conditional on police using lethal force in compliance with regulations and departs from international standards that require law enforcement officers use force in accordance with the principles of necessity and proportionality, and that they be held accountable for its misuse.

The jurisdiction of military courts in human rights cases involving members of the military remains an issue. Legislative Decree 1095, adopted in 2010 by the administration of President Alan García, could allow military courts to try members of the military accused of abuses against civilians in public security operations. International human rights bodies have consistently rejected the use of military prosecutors and courts in cases involving human rights violations. As of November 2014, the Constitutional Court had yet to rule on the decree’s constitutionality, which Peruvian human rights advocates have challenged.

In a landmark trial, former President Alberto Fujimori was sentenced in 2009 to 25 years in prison for killings and “disappearances” in 1991 and 1992. His intelligence advisor, Vladimiro Montesinos, three former army generals, and members of the Colina group, a government death squad, are also serving sentences ranging from 15 to 25 years for the assassination in 1991 of 15 people in the Lima district of Barrios Altos, and for 6 “disappearances.”

Courts have made much less progress in addressing violations that occurred under the earlier administrations of Fernando Belaúnde (1980-1985) and Alan García (1985-1990). In a report issued in August 2013 to mark the 10th anniversary of the Truth and Reconciliation Commission’s report, the human rights ombudsman found that, despite initial efforts, Peru had failed to consolidate a specialized judicial system with sufficient staff and resources to bring most cases to court.

As of 2013, 48 percent of 2,880 cases of human rights violations during the armed conflict reported to prosecutors had been dismissed, largely because prosecutors were unable to identify perpetrators and the Ministry of Defense was unwilling to provide documents to facilitate investigations. Only about 2 percent of the cases had been brought to trial, according to Human Rights Trials in Peru, a project based at George Mason University that monitors human rights prosecutions. In 2014, court hearings continued in their fourth year in two emblematic cases: torture and disappearances at the Los Cabitos military base in Ayacucho in 1983 and a massacre at Accomarca in 1985 in which an army unit killed 62 peasants.

In a recent trend, the Supreme Court has overturned an increasing number of convictions on appeal. While the court has sometimes based its decisions on contradictions in witness testimony, it ruled in a January 2014 verdict that the disappearance in 1983 of 6 people whose bodies were found and identified more than 20 years later was subject to a statute of limitations, contravening Peru’s obligations to hold accountable those reponsible for enforced disappearances.

In June 2014, President Ollanta Humala appointed as minister of the interior a former army intelligence officer who was facing charges for his alleged role in the 1988 murder of Hugo Bustíos, the Ayacucho correspondent for Caretas magazine. Two soldiers were convicted in 2007 for Bustíos’ murder, one of whom testified that the minister, Daniel Urresti, had commanded the soldiers who ambushed and shot Bustíos before blowing up his body with a grenade.

Urresti’s appointment was highly questionable considering the gravity of the charge and that his public position as minister could influence the judicial outcome of his case and undercut the right to justice of Bustíos’ relatives. In addition, President Humala’s public statements in advance of the trial supporting Urresti’s claims of innocence were an inappropriate interference in ongoing judicial proceedings.

Congress took a significant step in 2014 to combat torture, which continues to be a chronic problem in Peru. In June, it approved a bill mandating the human rights ombudsman to implement the National Preventive Mechanism against Torture (NPM), in fulfillment of Peru’s obligations under the Optional Protocol to the Convention against Torture and Other Cruel, Inhuman or Degrading Treatment (OPCAT), which it ratified in 2006. The bill requires the ombudsman, inter alia, to visit and monitor conditions in prisons and detention centers without prior announcement, make proactive and preventive recommendations, and publish an annual report, but it did not state how these additional activities would be funded. As of November 2014, the bill was delayed in Congress pending clarification from the plenary on points that the president of the congressional committee that debated the draft had raised.

In March 2014, journalist César Quino was given a six-month suspended prison sentence for defaming the then-governor of Ancash, César Alvarez, in an article published in El Observador, a paper Quino edits that is critical of the regional government. In recent years, Alvarez—now facing charges for the murder of a political opponent— has won several other defamation suits in efforts to silence his press critics.

In April 2014, a bomb exploded at the home of journalist Yofré López Sifuentes in Barranca, a port city north of Lima. López, who edits a weekly newspaper and presents a radio program called “Curfew” (Toque de Queda), was not hurt, but his mother and stepfather were injured. According to press reports, he had been a prominent critic of air pollution caused by local agrobusinesses.

Women and girls in Peru have the right to seek abortions only in cases of risk to their health or life. In June 2014, the Ministry of Health published guidelines detailing the administrative procedures hospitals must follow in assessing individual cases. Addressing a previous regulatory vacuum that had been criticized by international human rights bodies, the rules allow health staff to perform abortions under 10 medical conditions, and to consider the rights and needs of women and girls not covered by those conditions on a case by case basis. Access to services in situations that fall outside the prescribed conditions—such as when a woman’s or girl’s mental health could be dangerously affected by an unwanted pregnancy—is left to the discretion of facility staff, with a facility-based appeals process.

In its concluding observations on Peru’s combined seventh and eighth periodic reports, the Committee on the Elimination of all Forms of Discrimination against Women urged Peru to adopt a comprehensive law to combat violence against women and implement a strategy to fight discriminatory gender-based stereotypes. It also recommended that Peru extend the grounds of legalized abortion to cases of rape and incest.

In August 2014, the Committee on the Elimination of Racial Discrimination (CERD) recommended that Peru take measures to avoid the propagation of material stigmatizing its indigenous and Afro-Peruvian population. The committee referred specifically to “The Peasant Jacinta” (La Paisana Jacinta), a popular television comedy show featuring a male actor dressed up as a grossly caricatured indigenous peasant woman. Following CERD’s recommendations, Frecuencia Latina, the television channel which has broadcast the show since 1999, removed it from its prime-time slot.