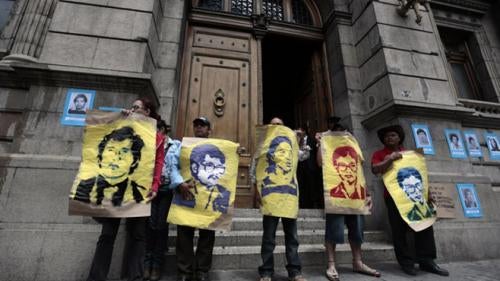 Former Guatemalan leader Efraín Ríos Montt was found guilty in May 2013 of genocide and crimes against humanity, the first time that any head of state has been convicted of genocide in a national court. The ruling was overturned on procedural grounds days later, however, and a new trial is scheduled for early 2015.

The Attorney General’s Office has also made progress on other prominent human rights cases, but impunity remains pervasive. In May, then-Attorney General Claudia Paz y Paz, recognized for her advances in reforming the country’s prosecutorial system, was removed from office by the Constitutional Court seven months before her term was due to end.

The mandate of the United Nations-backed International Commission Against Impunity in Guatemala (CICIG), which since 2007 has supported efforts to investigate and prosecute organized crime, will end in September 2015. President Otto Pérez Molina has said that this will be the commission’s final term.

In a landmark ruling, former head of state Efraín Ríos Montt was found guilty in May 2013 of genocide and crimes against humanity and sentenced to 80 years in prison. The retired general led a military regime from 1982 to 1983 that carried out hundreds of massacres of unarmed civilians. The ruling was overturned several days later by the Constitutional Court. A retrial is scheduled to commence in early 2015.

In April 2014, the judge who initially convicted Ríos Montt of genocide was suspended and fined by an ethics tribunal for unprofessional conduct, an event described by the Office of the UN High Commissioner for Human Rights in Guatemala as a serious assault on judicial independence. She has since been reinstated.

In May, Guatemala’s Congress passed a resolution denying that acts of genocide were committed during the country’s civil war, despite findings to the contrary by a UN-sponsored Truth Commission in 1999. President Otto Pérez Molina had previously expressed his support for a public letter signed by a group of politicians calling genocide charges against former military officers a “fabrication.”

Ríos Montt has also been charged in a separate case involving the massacre of 300 men, women, and children in the town of Dos Erres in 1982. The trial is stalled pending the resolution of an appeal by defense attorneys who have called into question the independence of the presiding judge.

In July, Felipe Solano Barillas became the first ex-guerrilla to be convicted in connection with atrocities committed during the country’s civil war. Found guilty of ordering the massacre of 22 residents of the town of El Aguacate in 1988, he has been ordered to serve 90 years in jail.

In June, Colonel Esteelmer Reyes and Military Commissioner Heriberto Valdez were arrested in connection with sexual violence perpetrated against 15 Q’eqchi’ women in the community of Sepur Zarco in 1982.

In June, three former members of the National Police were arrested in connection with the murder of prominent human rights activist Myrna Mack. Mack was killed in 1990 for her role in documenting abuses committed during the country’s civil war.

Powerful criminal organizations engage in widespread acts of violence and extortion. Rampant corruption within the justice system, combined with intimidation and inefficient procedures, contribute to high levels of impunity. Frustrated with the lack of criminal enforcement, some communities have resorted to vigilantism. According to the human rights ombudsman, 49 people were killed by lynching in 2013, more than twice the number in 2012.

Despite these problems, prosecutors have made progress in cases of violent crime, as well as torture, extrajudicial killings, and corruption—due in large part to the work of former Attorney General Claudia Paz y Paz, as well as the support of CICIG.

In February, nine members of the Zetas Cartel were convicted for the massacre of 27 farmhands during a dispute over drug trafficking routes in the Petén region. The gang members were sentenced to a total of over 100 years in jail.

In September, former army officer Byron Lima Oliva, imprisoned since 2006 for his role in the 1998 murder of Bishop Juan José Gerardi, was charged with running a criminal network in the prison. At least seven other people were implicated in the case, including the national prison director, Sergio Camargo. The investigation was initiated in 2013 by CICIG, in collaboration with the Attorney General’s Office.

Progress in holding perpetrators of serious abuses to account has been undercut by the dilatory strategy of defense lawyers, including the abuse of amparo protection appeals, leading to the postponement of trials by months or even years.

The government continues to use the military to address public security challenges, despite the latter’s long history of human rights abuse. More than 20,000 soldiers are currently deployed throughout the country.

In May, the government announced the creation of a new inter-agency task force to provide security against drug trafficking and related crimes throughout Guatemalan territory. The force is known by the acronym FIAAT, and includes military personnel.

Attacks and threats against human rights defenders are common, significantly hampering human rights work in the country. Acts of violence and intimidation against trade unionists endanger freedom of assembly and association and the right to organize and bargain collectively. Fifty-three trade unionists were killed between 2007 and 2013, according to the International Trade Union Conference.

Journalists, especially those covering corruption and drug trafficking, also face threats, attacks, and legal intimidation. In November 2013, President Otto Pérez Molina and Vice President Roxanna Baldetti filed charges against José Rubén Zamora, editor of El Periodico, after the newspaper published articles referring to alleged links between the administration and organized crime. In February, a judge barred Zamora from leaving the country pending investigation of the allegations. The president subsequently dropped the charges; the vice president said she would as well, but at time of writing had not done so.

In April, the Guatemalan opposition party LIDER brought charges against the magazine ContraPoder after the latter incorrectly claimed that letters of support to the leader of the opposition had been fabricated. Criminal charges have been filed against the organization, despite a public retraction of statements and an apology by the magazine.

The UN-backed CICIG, established in 2007, plays a key role in assisting Guatemala’s justice system in prosecuting violent crime, working with the Attorney General’s Office, the police, and other government agencies to investigate, prosecute, and dismantle criminal organizations operating in the country. The CICIG can participate in criminal proceedings as a complementary prosecutor, provide technical assistance, and promote legislative reforms.

Iván Velásquez Gómez, a prominent Colombian jurist, was appointed to lead the CICIG following the resignation of the previous head. Formerly an auxiliary magistrate on Colombia’s supreme court, Velásquez played a leading role in investigating ties between politicians and paramilitaries in that country.

The CICIG’s mandate will terminate in September 2015, however, and President Pérez Molina has stated that it will not be renewed for an additional term.

In June, a Swiss court convicted the former director of the National Police for his role in planning the extrajudicial killings of prisoners in the El Pavón and El Infiernito Prisons in 2005 and 2006. He was sentenced to life in prison.

Despite a recent ban on universal jurisdiction cases in Spanish courts, Judge Santiago Pedraz has stated that he will continue investigations into eight Guatemalan officers implicated in human rights abuses during the country’s civil war.

The United States continues to restrict military aid to Guatemala on human rights grounds. The US Consolidated Appropriations Act 2014, requires the Guatemalan government to take “credible steps” to implement the reparations plan for communities affected by construction of the Chixoy Dam, ensure that the army’s role is limited to combating external threats, and support the investigation and prosecution of military officers implicated in past atrocities before full aid is restored.