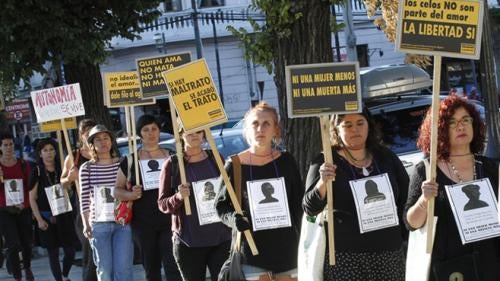 In March 2014, President Michelle Bachelet began her second term in office with a committment to tackle social and economic inequality, focusing initially on overhauling the education and taxation systems. Her campaign platform included a pledge to bring Chile’s counterterrorism law into conformity with international standards, and to present a law to end the prohibition of abortion when a pregnancy endangers the life of the woman or girl, is unviable, or results from rape. Her administration also undertook to end the jurisdiction of military courts over alleged human rights abuses committed by Carabineros (police responsible for public order and crime prevention).

While courts continue to prosecute individuals for abuses committed during the Augusto Pinochet dictatorship (1973-1990), the Supreme Court has used its discretionary powers in many cases to reduce sentences against human rights violators, resulting in sentences that are incommensurate with the gravity of the crimes.

Following repeated recommendations by United Nations human rights bodies, officials announced in 2014 that the Bachelet administration would not use the 1984 counterterrorism law to address violence arising from indigenous protests over land.

The law’s overly broad definition of terrorism continues to allow for the prosecution on terrorism charges of activists allegedly responsible for acts such as arson and the destruction of private property, although in most recent cases judges have rejected the terrorism charges as unfounded. Another concern is a provision in the legislation allowing prosecutors to withhold the identity of certain witnesses, which has led to the detention of some suspects for over a year on the basis of evidence they cannot effectively challenge.

In September 2014, 14 people were injured by a bomb placed in a refuse bin in a crowded shopping center at a Santiago subway station. A string of such attacks attributed to anarchist groups had been reported over several years, but until the September incident, explosive devices had never been left in daytime in crowded places, and no bystanders had been seriously injured. Although several of the past incidents led to prosecutions under the counterterrorism law, in each case courts rejected terrorism charges for lack of evidence.

In November, the government presented to the Senate a bill to replace the present counterterrorism law. The bill strengthens due process guarantees by giving defense attorneys the right to be informed of the identity of protected witnesses as well as to question the witnesses about their evidence and probe their credibility. It also allows police to use undercover agents to gather evidence about terrorist groups, giving them immunity from prosecution for actions committed in pursuit of their judicial mandate.

Legislation approved by Congress in September 2010 under the administration of Sebastian Piñera finally ended the jurisdiction of military courts over civilians, a reform urged by the Inter-American Court of Human Rights in its 2005 ruling in the Palamara Iribarne case. However, the reform left untouched the jurisdiction of military courts over abuses committed by the uniformed police, Carabineros.

Military courts are composed of military officers on active service, and lack the independence and due process guarantees of ordinary criminal proceedings. Investigations are secret, criminal proceedings are conducted mainly in writing, and lawyers have limited opportunities to cross-examine witnesses.

Most complaints filed with military courts for human rights abuses in which civilians are alleged victims are dismissed. According to data published in 2014 by the National Institute for Human Rights (INDH—Chile’s human rights ombudsman), the number of convictions for police abuses in Chile’s central regions between 2005 and 2011 fell to 0.48 percent of the complaints filed, compared to 3.2 percent for the period from 1990-2004, even though the number of complaints increased significantly.

Chile’s top courts have increasingly opposed military jurisdiction in such cases. In May, the Constitutional Court ruled that the decision of a civilian judge to decline jurisdiction over police accused of blinding a demonstrator by firing a paintball into his eye during a 2013 street protest was unconstitutional, and issued a similar decision in a separate case the following month. The Supreme Court’s criminal chamber has ruled in favor of civilian court jurisdiction in several cases, including one involving the death of a detainee who suffocated after being abandoned in a police vehicle in hot temperatures.

In May 2014, the minister of defense promised to present draft legislation before the end of June 2015 that would overhaul the military criminal code and end military jurisdiction over crimes committed by the armed forces (including Carabineros) against civilians.

Information published by the INDH in 2014 revealed that police handling of public protests fell short of international human rights standards. The institute concluded that use of anti-riot equipment such as water cannons and tear gas by Carabineros in response to violence by protesters in 2013 was indiscriminate in 70 percent of the demonstrations it observed. More often than not, Carabineros used these methods disproportionately to the threat faced, and also used disproportionate force in making arrests.

Public protests and the number of abuses by Carabineros reported in this context declined significantly in 2014. In August, at the insistence of the INDH, Carabineros for the first time authorized the publication of its operational protocols when dealing with public protests.

Many of Chile’s prisons are grossly overcrowded and conditions remain poor despite government reform efforts. A study of 44 prisons published in March 2014 by the INDH reported beatings by prison guards, and high levels of inmate violence in some prisons that resulted in 35 deaths from January to October 2012.

Prisoners are often arbitrarily confined in punishment cells without adequate light, ventilation, basic access to water, sanitation, and hygiene, or medical attention. On her retirement in 2014, a Supreme Court official responsible for monitoring prison conditions described this practice as “flagrant cruel and inhuman treatment.”

Cases of torture continue to be reported and impunity is common. Between 2011 and August 2014, the INDH filed 33 complaints of torture with the courts—16 for acts allegedly committed by Carabineros, 10 by prison guards, and 7 by the Investigations Police (PDI).

The chief justice stated in March 2014 that 1,022 cases of human rights violations committed during the Pinochet dictatorship (1973-1990) were under adjudication by the courts, 72 of which were cases of torture. According to the human rights unit within the Ministry of Interior (a party to about 800 of the cases under court investigation), as of October, 1,086 individuals had been charged with or convicted of human rights violations including killings and enforced disappearances, 279 had final judgments rendered against them, and 75 were serving prison sentences.

The Supreme Court’s criminal chamber has been inconsistent in reviewing sentences in important human rights cases. The Observatory of Transitional Justice at Diego Portales University, which monitors human rights trials, has found that in enforced disappearance cases the court often confirms prison sentences that comply with Chile’s obligation to hold perpetrators accountable through appropriate punishments. In extrajudicial execution cases, however, the court has often reduced prison terms and allowed alternatives to prison if significant time has elapsed since the criminal act.

Chile is one of four countries in Latin America (the other three being El Salvador, Honduras, and Nicaragua) with an absolute prohibition on abortion, even in the event of medical necessity or rape. In her annual address to the nation in May 2014, President Bachelet announced that her government would present legislation to decriminalize abortion in cases where there was a risk to the life of the woman or girl, fetal unviability, or rape. As of November 2014, the government had not presented its bill to Congress. Two bills presented by members of the chamber of deputies and senators in May and July 2013 were still under discussion in committee at time of writing.

A bill tabled by five senators in May 2013 to achieve legal recognition of the gender identity of transgender people was still under discussion in the Senate in November 2014. The bill would allow individuals to change their name and legal gender on birth certificates and identity cards so that official documents match their gender identity. Another bill presented by former president Sebastián Piñera in 2011 that would provide legal recognition and protection for same sex couples was approved by the Senate in October 2014 and at time of writing was awaiting a vote in the Chamber of Deputies.

As a member of the United Nations Human Rights Council (HRC), Chile supported UN efforts to put human rights violations in North Korea, Sri Lanka, Belarus, Iran, the Occupied Palestinian Territories, Ukraine, and Syria under scrutiny. Chile was also one of four countries that presented a landmark HRC resolution on combating violence and discrimination based on sexual orientation and gender identity in September 2014, and was the only Latin American member of the HRC opposing a contentious resolution in June 2014 that did not recognize the many different forms families can take.

Many also called for a debate to end the criminalization of abortion. Chile accepted this recommendation (which it had rejected at the 2009 UPR) while pointing out that proposed legislation would be limited to pregnancies that endangered the life of the mother, were unviable, or resulted from rape.

In July 2014, in its concluding observations on Chile’s sixth periodic report, the Human Rights Committee, the international expert body tasked with interpreting the International Covenant on Civil and Political Rights, recommended that Chile reform its counterterrorism legislation to ensure that terrorism crimes are clearly defined in the law, and urged Chile not to apply the law in a discriminatory manner to Mapuches. The committee also expressed concern about the Supreme Court practice of lowering sentences for grave human rights violations committed in the 1970s and 1980s.

In Norín Catrimán and others v. Chile, the Inter-American Court of Human Rights ruled in May 2014 that Chile was responsible for violating the rights to due process, freedom of thought and expression, and personal liberty of seven Mapuche leaders and an activist convicted on terrorism charges in 2003 and 2004.