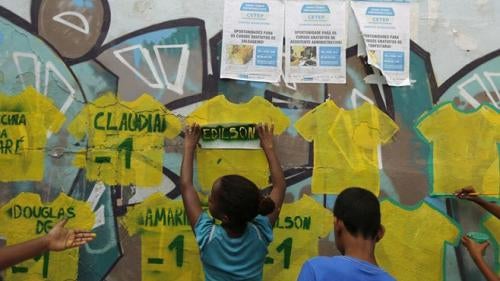 Brazil is among the most influential democracies in regional and global affairs, and in recent years has emerged as an increasingly important voice in debates over international responses to human rights problems. At home, the country continues to confront serious human rights challenges, including the use of torture and ill-treatment, unlawful police killings, prison overcrowding, and ongoing impunity for abuses committed during the country’s military rule (1964-1985).

Violent criminal gangs and abusive policing are significant problems in many Brazilian cities. In recent years, the São Paulo and Rio de Janeiro state governments have implemented measures aimed at improving police performance and curbing abuses, yet police misreporting and other forms of cover-up persist.

During the year leading up to the 2014 World Cup, there were major protests throughout the country. Dozens of people were injured in confrontations between protesters and police, including journalists. In several incidents, police used excessive force, including beating people who had not resisted arrest, and firing teargas canisters at protesters from short range.

Police were responsible for 436 killings in the state of Rio de Janeiro and 505 killings in the state of São Paulo in the first nine months of 2014. In the state of São Paulo, this represents an increase of 93 percent over the same period in 2013. According to the most recent available information compiled by the Brazilian Forum on Public Security, a nongovernmental organization (NGO), more than 2,200 people died during police operations throughout Brazil in 2013, averaging 6 people a day.

Police routinely report these deaths as the result of shoot-outs with criminals. While some police killings result from legitimate use of force, others do not, a fact documented by Human Rights Watch and other groups, and recognized by Brazilian criminal justice officials.

In an effort to prevent cover-ups of unlawful police killings, the São Paulo state government issued a resolution in January 2013 prohibiting police from removing victims’ corpses from the scenes of shootings. Yet significant obstacles to accountability for unlawful killings in São Paulo persist, including the failure of police to preserve crucial evidence, and the failure of authorities to allocate sufficient staff and resources to prosecutors responsible for investigating these cases.

In the state of Rio de Janeiro, nearly 2,900 police officers and other public servants received financial compensation in May 2014 for meeting crime reduction targets, including reductions in police homicides.

Many Brazilian prisons and jails are severely overcrowded and plagued by violence. The country’s incarceration rate increased by 45 percent between 2006 and 2013, according to data from the Ministry of Justice’s Integrated System of Penitentiary Information (InfoPen). The adult prison population exceeds half a million people—37 percent more than the prisons were built for, according to the National Council of Justice in June 2014.

In addition, more than 20,000 children are currently serving prison sentences. Delays within the justice system contribute to the overcrowding. Over 230,000 individuals are being held in pretrial detention in prisons. In Piauí state, 68 percent of detainees are in pretrial detention, the highest rate in the country. Overcrowding and poor sanitation facilitate the spread of disease, and prisoners’ access to medical care remains inadequate.

Torture is a chronic problem in police stations and detention centers. Between January 2012 and June 2014, the national Human Rights Ombudsman’s Office received 5,431 complaints of torture and cruel, inhuman, or degrading treatment (about 181 complaints per month) from all over the country through a telephone hotline service. Of these, 84 percent referred to incidents at police stations, jails, prisons, and juvenile detention centers.

Video footage posted online by the Folha de São Paulo newspaper on January 7, 2014, shows the remains of the decapitated corpses of three of the four inmates who were killed by fellow prisoners at the Pedrinhas Prison Complex in Maranhão state on December 17, 2013. A total of 60 inmates were killed in the state in 2013, according to the National Council of Justice (NCJ), which conducted an investigation in five Maranhão prisons and found what it called an “utter lack of security” for inmates. In April 2014, the NCJ issued a recommendation to courts setting out basic steps that judges should take to investigate credible allegations of torture and ill-treatment.

Law enforcement agents who commit abuses against inmates and detainees are rarely brought to justice. In a notable exception, a total of 73 police officers were convicted of homicide in 2013 and 2014 for their participation in the 1992 killing of 111 detainees in the Carandiru prison in São Paulo state.

In July 2014, President Dilma Rousseff appointed the 23 members of the National Committee for the Prevention and Combatting of Torture, which is part of the National System to Prevent and Combat Torture, created by law in August 2013. In November, the committee appointed a panel of 11 experts that will have the authority to conduct regular and periodic visits to civilian and military detention centers, require the opening of investigations into possible cases of torture, and make recommendations to public and private institutions.

According to the Brazilian Association of Investigative Journalism, state security forces injured or detained 178 journalists who covered demonstrations in various parts of the country in the year leading up to the 2014 World Cup.

Brazil took an important step by enacting the Brazilian Digital Bill of Rights in April 2014. The Bill of Rights includes protection for the right to privacy and free expression online, and serves to reinforce application of the rule of law in the digital sphere. The law establishes Brazilian support for net neutrality as a guiding principle for future Internet developments. It has yet to be implemented.

Brazil’s criminal code prohibits abortion except in cases of rape or when necessary to save a woman’s life. In 2012, the Supreme Court expanded the exceptions to include cases of anencephaly, in which the fetus has a fatal congenital brain disorder. Women and girls who obtain an abortion outside of these exceptions may face sentences of up to three years in prison, while people who perform abortions face up to four years’ imprisonment.

Abortions performed in clandestine clinics put women at high risk, as exemplified in the high profile case of Jandira dos Santos Cruz, who police suspect died from a botched illegal abortion in late August 2014, and whose body was later mutilated to obscure her identity.

In August 2013, President Rousseff signed into law a bill that requires public hospitals to provide comprehensive care for victims of sexual violence, including “pregnancy prophylaxis” for rape victims and information on the right to access abortion in cases where it is legal. In 2014, the Ministry of Health issued a resolution extending national health insurance to cover legal abortion, but revoked the resolution a week later in response to political pressure.

The national Human Rights Ombudsman's Office received more than 1,500 complaints of violence and discrimination against lesbian, gay, bisexual, and transgender (LGBT) persons in 2013. In the first six months of 2014, the Ombudsman’s Office reported over 500 such complaints. The office also reported a spike in complaints after a presidential candidate called for LGBT people to get psychological treatment during a televised debate.

Federal government efforts to eradicate forced labor have resulted in more than 46,000 workers being freed from slave-like conditions since 1995, according to official data. However, the Pastoral Land Commission, a Catholic NGO, received complaints that more than 3,600 individuals were victims of forced labor in 2013. Criminal accountability for offending employers remains relatively rare.

In June 2014, the Congress adopted a constitutional amendment that allows the government to confiscate property, without providing compensation to the property owner, where forced labor is found to have been used. Lawmakers have yet to approve a law defining the meaning of forced labor and explaining how property expropriation will be carried out in such cases.

Rural activists and indigenous leaders involved in conflicts over land continue to face threats and violence. According to the most recent numbers of the Pastoral Land Commission, 34 people involved in land conflicts were killed and 15 were victims of attempted murder throughout the country in 2013. As of August, the commission had already reported 23 people killed in land conflicts in 2014. Nearly 2,500 rural activists have received death threats over the past decade.

In May 2012, a national truth commission began investigating the systematic human rights violations that occurred during military rule from 1964 to 1985, including extrajudicial killings, forced disappearances, torture, arbitrary detention, and the curtailment of free expression. In February, the truth commission presented a preliminary report that identified seven armed forces installations where political prisoners were tortured and died during the dictatorship period. At time of writing, the truth commission’s final report was due to be released in December 2014.

The perpetrators of these crimes have been shielded from justice by a 1979 amnesty law. In April 2010, the Brazilian Supreme Court reaffirmed lower court rulings that the amnesty barred most prosecutions of state agents for the crimes. However, six months later, the Inter-American Court of Human Rights ruled that this interpretation violated Brazil’s obligations under international law, and that the amnesty should not be an obstacle to prosecuting serious human rights violations committed under military rule.

In April 2013, São Paulo prosecutors filed criminal charges against a retired army colonel and police investigator for concealing the body of a medical student killed during military rule. The case is still being litigated in Brazilian courts. In June 2013, however, a judge in Rio de Janeiro refused to try state agents for their alleged involvement in the enforced disappearance of a journalist in 1970.

Following a petition presented by the Inter-American Commission on Human Rights, which pointed out ongoing human rights abuses in the Pedrinhas Prison Complex in Maranhão state, the Inter-American Court of Human Rights called upon Brazil in November 2014 to immediately adopt measures to protect the life and personal integrity of all prisoners in the prison complex.

As a returning member of the UN Human Rights Council (HRC), Brazil maintained a positive voting record in 2014, supporting the adoption of resolutions on a number of critical human rights situations. In June, Brazil voted in favor of a resolution condemning military operations conducted by Israeli forces in Gaza, condemning abuses against civilians by both sides, and dispatching an international commission of inquiry to investigate violations of humanitarian law and human rights law. In September 2014, Brazil was one of the sponsors of an HRC resolution on combating violence and discrimination based on sexual orientation and gender identity. The resolution called on the UN high commissioner for human rights to update a 2012 report on violence and discrimination, with a view to share best practices to overcome these abuses. Brazil abstained, however, from a contentious HRC resolution that did not recognize the many different forms families can take.

At the UN General Assembly, Brazil has played a leading role in promoting privacy in the digital era. In December 2013, the General Assembly adopted a resolution proposed by Brazil and Germany calling on all states to protect and respect the right to privacy and tasking the high commissioner for human rights to report on the issue. That report, issued in July 2014, concluded that mass surveillance had become “a dangerous habit” in some countries and that many states were falling short on privacy protections. Brazil was continuing to press for further action by the General Assembly on these issues at time of writing.

In November 2014, Brazil voted in favor of a landmark resolution adopted by the General Assembly calling for the Security Council to refer North Korea to the International Criminal Court for crimes against humanity.

At the Organization of American States, Brazil presented a resolution prohibiting all types of discrimination against LGBT people, including discrimination that limits their political participation and involvement in other aspects of public life. The resolution was approved in June 2014.

The text of the online 2015 World Report Brazil chapter has been updated from the print version to take into account events in late 2014.