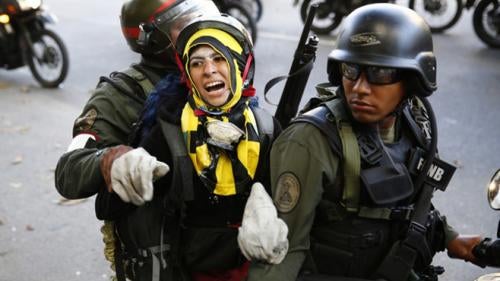 In 2014, security forces used excessive force against largely peaceful demonstrators, many of whom were arbitrarily arrested, subject to severe beatings and other abuses during their detention, and denied basic due process rights. These human rights violations, which occurred over a period of several weeks in different locations, were practiced systematically by Venezuelan security forces.

Under the leadership of President Hugo Chávez and now President Nicolás Maduro, the accumulation of power in the executive branch and the erosion of human rights guarantees have enabled the government to intimidate, censor, and prosecute its critics. While some Venezuelans continue to criticize the government, the prospect of reprisals—in the form of arbitrary or abusive state action—has undercut judicial independence, and forced journalists and rights defenders to weigh the consequences of publicizing information and opinions that are critical of the government.

Excessive Use of Force against Unarmed Protesters

Beginning in February 2014, state security forces—including the Bolivarian National Guard, the Bolivarian National Police, and state police forces—routinely used unlawful force against unarmed protesters and bystanders. The violations included severe beatings; the indiscriminate firing of live ammunition, rubber bullets, and teargas into crowds; and, in some cases, the deliberate firing of pellets at point blank range at unarmed individuals already in custody. Security forces also tolerated and sometimes collaborated directly with armed pro-government gangs that attacked protesters with impunity. According to the Attorney General’s Office, 3,306 people, including 400 adolescents, were detained during the demonstrations.

Detainees were often held incommunicado on military bases for 48 hours or more before being presented to a judge. During their detention, they suffered a range of abuses that included severe beatings, electric shocks or burns, and being forced to squat or kneel, without moving, for hours at a time. In some cases, the ill-treatment constituted torture.

Judge María Lourdes Afiuni remains under criminal prosecution as a result of a 2009 ruling in which she authorized the conditional release of a government critic. Although Afiuni’s ruling complied with a recommendation by international human rights monitors—and was consistent with Venezuelan law— a provisional judge who had publicly pledged his loyalty to Chávez ordered her to stand trial on charges of corruption, abuse of authority, and “favoring the evasion of justice.” She continues to be forbidden from making any public statements about her case.

During the 2014 protests, justice officials failed to fulfil their role as a safeguard against abuse of power and instead were party to serious due process violations. Scores of victims were denied access to a lawyer until minutes before judicial hearings, which were often scheduled in the middle of the night. Prosecutors and judges routinely turned a blind eye to evidence suggesting that detainees had been physically abused, or that security forces had planted evidence against them.

Justice officials also acted on the government’s unsupported claim that its political opponents were responsible for the violence that erupted during the demonstrations. The government accused Leopoldo López, an opposition leader, of being the “intellectual author” of the protest-related deaths and attacks against public offices and vehicles on February 12. The Attorney General’s Office promptly sought his arrest for several alleged crimes. López has been in detention in a military prison since he turned himself in on February 18. During his trial, which began in July, the presiding judge has not allowed his lawyers to present evidence in his defense.

In April, the Supreme Court summarily tried and sentenced two opposition mayors to 10 and 12 months in prison, respectively, in proceedings that violated basic due process guarantees, including their right to appeal their convictions.

Over the past decade, the government has expanded and abused its powers to regulate media. While criticism of the government is available in some newspapers and radio stations, fear of government reprisals has made self-censorship a serious problem.

In 2010, the National Assembly amended the telecommunications law to grant the government power to suspend or revoke concessions to private outlets if it is “convenient for the interests of the nation.” It also expanded the scope of a restrictive broadcasting statute to cover the Internet, allowing the arbitrary suspension of websites for the vaguely defined offense of “incitement.” Previous amendments to the criminal code had expanded the scope and severity of defamation laws that criminalize disrespect of high government officials.

The government has taken aggressive steps to reduce the availability of media outlets that engage in critical programming. Venezuela’s oldest private television channel, RCTV, which was arbitrarily removed from public airwaves in 2007, was driven off cable TV in 2010. In 2013, Globovisión, which was for years the only major channel that remained critical of Chávez, was sold to government supporters because, according to its owner, it had become politically, economically, and legally unviable. Since then, Globovisión has significantly reduced its critical programming.

In January, the president of the National Assembly, Diosdado Cabello, filed a criminal defamation suit against a citizen who published an opinion piece in the newspaper Tal Cual, and four directors of the company that owns the paper, including its editor. The article cited unofficial sources for the number of people killed in Venezuela in 2013, and quoted Cabello saying: “If you don’t like insecurity, leave.” Cabello argued that he had never said that, and that the article undermined his reputation. A criminal court admitted the case in February, ordered the five men to present themselves before the courts once a week, and forbade them from leaving the country without prior judicial authorization.

During the 2014 protests, the government blocked transmission of NTN 24, a cable news channel, and threatened to prosecute news outlets over their coverage of the violence. In many instances, victims of security force abuses were professional journalists and people who had been taking photos or filming security force confrontations with protesters.

The Venezuelan government has sought to marginalize the country’s human rights defenders through repeated unsubstantiated allegations that they are seeking to undermine Venezuelan democracy with the support of the US government. In March, President Maduro stated that Rocío San Miguel, director of a nongovernmental organization (NGO) that promotes accountability of security forces, was “fully involved in an attempted coup” in Venezuela. In May, the minister of justice said that Humberto Prado, director of an NGO that monitors prison conditions in Venezuela, was involved in a conspiracy plot to undermine the Venezuelan government. In November, the president of the National Assembly, Diosdado Cabello, citing information provided by “patriotic informants,” said that 12 NGOs that submitted reports on torture during the United Nations Committee Against Torture’s review of Venezuela had “dark interests.”

Impunity of Abuses of Security Forces

As of November, prosecutors had received 242 complaints of alleged human rights violations committed during the 2014 protests, including only two cases of torture. According to the Attorney General’s Office, prosecutors had concluded 125 investigations, bringing charges against 15 members of public security forces. Official sources reported that two police officials were convicted for “events occurred in Anzoátegui” but provided no additional information on the case nor the convictions.

Killings by security forces are a chronic problem in Venezuela. In October, members of the Scientific, Penal, and Criminal Investigative Police killed five civilians during a search in the building of a pro-government group in Caracas. The Attorney General’s Office issued arrest warrants against seven officers, who, according to official news accounts, remained at large at time of writing.

According to the most recent official statistics, law enforcement agents allegedly killed 7,998 people between January 2000 and March 2009. Impunity for these crimes remains the norm.

Venezuelan prisons are among the most violent in Latin America. Weak security, deteriorating infrastructure, overcrowding, insufficient and poorly trained guards, and corruption allow armed gangs to effectively control prisons. Children deprived of liberty are routinely held with adults, particularly during pretrial detention. According to the Venezuelan Observatory of Prisons, as of August there were approximately 55,000 inmates—most of them in pretrial detention—in prisons with a capacity for 19,000. Since the Ministry of Penitentiary Matters was created in June 2011, at least 1,463 people have died in prisons, including at least 150 in 2014, according to unofficial sources.

Labor legislation adopted in April 2012 includes provisions that limit the freedom of unions to draft their statutes and elect their representatives. In practice, the National Electoral Council (CNE), a public authority, continues to play a role in union elections, violating international standards.

In July, President Maduro denounced protesting workers at the state-owned steel corporation Sidor, accusing them of being “mafias” that had “kidnapped” the company. Clashes between workers and members of the National Guard dispersing the demonstrations left some injured protesters, according to press reports. In August, the communications minister tweeted that the government had reached an agreement with the “true workers” of Sidor. Protests and strikes by workers who argued that the agreement was not signed by competent union representatives continued during that month.

Several international human rights monitors have expressed concern regarding abuses during the 2014 protests. In February, the Inter-American Commission on Human Rights urged Venezuela to investigate unlawful actions and guarantee public security. In March, six UN rapporteurs called on the Venezuelan government to ensure “prompt clarification of allegations of arbitrary detention, excessive use of force and violence against protesters, journalists and media workers during protests.”

In September, the UN Working Group on Arbitrary detention stated that Leopoldo López and one of the mayors convicted in April had been arbitrarily detained. In October, the UN high commissioner for human rights urged Venezuela to release arbitrarily detained protestors and politicians. For years, Venezuela’s government has refused to authorize these human rights experts to conduct fact-finding visits in the country.

The regional organization Unasur engaged with the government of Venezuela and opposition leaders in early 2014 to promote dialogue. The Unasur representatives, however, failed to call on Venezuela to address abuses, even though Unasur’s constitutive treaty states that “fully effective democratic institutions and the unrestricted respect for human rights are essential conditions for building a common future of peace, economic and social prosperity and for the development of integration processes among the Member States.” The dialogue was stalled at time of writing.

In July, the US Department of State revoked the visas of 24 Venezuelan officials in response to allegations of excessive use of force and arbitrary detentions against protesters.

Since 2013, as a consequence of the government’s decision to withdraw from the American Convention on Human Rights, Venezuelan citizens and residents are unable to request the intervention of the Inter-American Court of Human Rights when local remedies for abuses are ineffective or unavailable for any abuses committed since that date. The Inter-American Commission has continued to monitor the situation in Venezuela applying the American Declaration of Rights and Duties of Man.

The Venezuelan government continued to support a campaign by Ecuador to undermine the independence of the commission and limit the funding and effectiveness of its special rapporteurship on freedom of expression.

In light of local groups’ claims that patients with cancer, HIV/AIDS, and hemophilia, among other illnesses, had limited access to medicines and basic medical supplies, the UN special rapporteur on the right to health urged the Venezuelan government in April 2014 to “adopt all the necessary measures to guarantee the protection and full enjoyment of the highest attainable standard of physical and mental health for all the population.”

As a member of the UN Human Rights Council, Venezuela regularly voted to prevent scrutiny of serious human rights situations around the world. Venezuela voted down resolutions spotlighting abuses in North Korea, Syria, Iran, Sri Lanka, Belarus, and Ukraine. In October, Venezuela was elected to a two-year term on the UN Security Council.