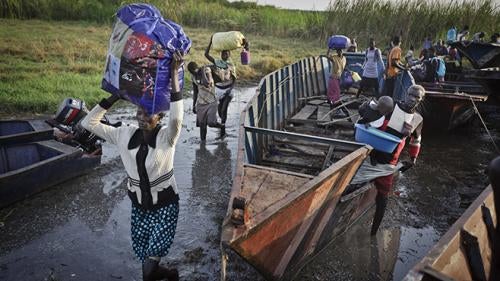 Horrific attacks on civilians began within 24 hours of the start of South Sudan’s new war in mid-December 2013. Thousands of civilians have been killed and large parts of key towns, including civilian infrastructure such as clinics, hospitals, and schools, have been looted, destroyed, and abandoned. An estimated 1.5 million people were forced to flee their homes; 100,000 people still shelter in United Nations compounds, too afraid to return home. Three years after South Sudan’s independence famine looms on the horizon, and the conflict continues, despite peace negotiations in Ethiopia.

The conflict, triggered by fighting in Juba, the capital city, between soldiers loyal to President Salva Kiir, a Dinka, and those loyal to his former deputy, Riek Machar, a Nuer, followed growing political tensions. Kiir maintains the violence was a coup attempt by Machar, a charge the now-leader of the Sudan People’s Liberation Movement/Army-in Opposition forces has denied.

Lack of accountability for decades of violence during Sudan’s long civil war helped fuel the conflict. Military and political leaders have failed to make any serious attempt to reduce abuses committed by their forces, or to hold them to account.

In the period between mid-December and mid-April, armed forces on both sides targeted and killed hundreds of civilians, often because of their ethnicity, and pillaged and destroyed civilian property. These crimes amount to war crimes and in some cases may be crimes against humanity.

Following fighting between government and defecting Nuer soldiers in Juba on December 15, government forces conducted a brutal crackdown on Juba’s Nuer population that included targeted killings, house-to-house searches, mass arrests, unlawful detention of hundreds of men in poor conditions, ill-treatment, and torture. Human Rights Watch documented more than 60 separate cases of targeted, extrajudicial killings of one or more individuals. In one of the worst incidents, government forces rounded up between 200 and 400 Nuer men on the night of December 15 and the following day, detained them in a building in the Gudele neighborhood and then massacred all but 13.

The conflict quickly spread to Jonglei, Upper Nile and Unity states. The largely ethnic Dinka town of Bor, Jonglei state, changed hands four times during the first two months of the war. Widespread targeting and killing of civilians took place in Bor in the first two weeks of January by opposition forces under the control of Gen. Peter Gadet. In one incident 14 women were killed by opposition fighters in a church compound.

Malakal, Upper Nile state, changed hands six times between December and April. Forces on both sides conducted house-to-house searches, arbitrary arrests, and killed many civilians, often based on their ethnicity. In a brutal attack in February, opposition forces killed civilians inside the Malakal hospital and attacked churches. In Bentiu, Unity state, government forces killed civilians during their recapture of the town in January, and in April, opposition forces attacking Bentiu slaughtered hundreds of civilians, including in appalling attacks on a mosque and hospital.

Civilians have also been attacked and killed while sheltering in bases of the United Nations Mission in South Sudan (UNMISS). On December 19, 2013, in Akobo town, Jonglei state, a group of armed Nuer civilians and security forces attacked the UN base and killed more than 20 Dinka men, as well as two peacekeepers. On April 17, a large group of Dinka youth and armed men, including some in government police and military uniforms, attacked the UN base in Bor town, killing at least 53 people, mostly Nuer, and injuring scores of others. The government has failed to investigate these killings or stop other harassment and attacks on Nuer civilians sheltering in UN bases.

Forces from both sides were responsible for widespread destruction of civilian property and mass looting. In Juba, during the first days of the conflict, government forces looted many neighborhoods, especially Nuer homes. Opposition forces in Bor looted and then destroyed the town’s market in January, as well as numerous homes and other buildings, including clinics. Both government and opposition forces pillaged offices of aid agencies, markets and banks in Bentiu and Malakal, leaving behind emptied, destitute towns. In Unity state, government forces, together with the Sudanese rebel group, the Justice and Equality Movement, looted and burned many villages and much of Leer town, during an offensive in January and February, contributing to severe food insecurity there. By the end of February, some 4,700 tons of World Food Programme food had been pillaged, hampering relief efforts.

Attacks on numerous health facilities further reduced already very limited access to services for survivors of sexual violence and services for people with psychosocial disabilities, many of whom languish in prisons.

Both government and opposition forces have used child soldiers in the conflict. Children were forcibly recruited by opposition forces in Bentiu in January and in other parts of Unity state later in the year. The latest UN secretary-general’s report on children and armed conflict stated that thousands of children were reportedly mobilized by Nuer efighters alligned with the opposition, known as “White Army.”

The government also deployed children on the front lines to defend Bentiu during an August opposition attack. The government and opposition have made little progress beyond signing agreements with the UN to end this abusive practice. According to the UN Office for the Coordination of Humanitarian Affairs (OCHA), armed forces were occupying more than 35 schools in South Sudan at time of writing.

In September, President Kiir signed the Convention against Torture and the African Charter on Human and Peoples’ Rights after they were passed by South Sudan’s Legislative Assembly (SSLA). South Sudan also ratified the Convention on the Elimination of all Forms of Discrimination Against Women and the Convention of the Rights of the Child, although at time of writing they had yet to deposit all the instruments of ratification to finalize the process of South Sudan being a party to these human rights treaties. Kiir also signed into law three media bills, including a right to information law, after they languished for years in the SLA.

A bill to define and limit NSS powers, passed by the SSLA amid controversy in October but not signed into law by the president at time of writing, gives NSS officers the same powers to arrest and detain as police, but does not specify permissible detention sites or guarantee basic due process rights, such as the right to counsel or to be tried within a reasonable period of time. It grants NSS officers powers to surveille and to search and seize property without clear judicial oversight. A pending bill to oversee nongovernmental organizations (NGOs) would restrict such groups to a government-approved list of activities.

South Sudan’s government has not provided accountability for abuses committed by its forces, nor demonstrated the will to hold them to account. The opposition has not, to Human Rights Watch’s knowledge, investigated or punished any abusive forces. A presidential committee formed in January to investigate killings and abuses has made no public update on its findings. Many victims are reluctant to provide information to the committee because of its lack of independence, and because there are no clear mechanisms for victim and witness protection.

South Sudan’s army and police investigated some killings by security forces in Juba in December 2013 but reports, which according to officials include names of alleged perpetrators, have not been made public. At least 11 alleged perpetrators were arrested but escaped from military detention in March during a gun battle. A military tribunal in Juba heard some looting cases, but no cases of killings were prosecuted.

The South Sudan Human Rights Commission released an interim report in March that described some abuses and called on the government to speed up investigations into alleged perpetrators.

The Intergovernmental Authority on Development (IGAD) took on the role of peacemaker in December 2013, establishing envoys to mediate talks in Addis Ababa, Ethiopia. In January, the parties to the conflict signed a cessation of hostilities agreement prohibiting attacks on civilians or civilian property, which was quickly violated. IGAD has deployed teams to monitor compliance with the agreement.

Uganda, an IGAD member, sent forces to shore up the government in December 2013, putting IGAD’s impartiality in question. Evidence of fresh cluster bombs used either by the government or Ugandan forces, was found near Bor town in February.

The United States, United Kingdom, Norway, China, and the European Union, have sent delegates or helped fund the peace process. In May, the US imposed sanctions on opposition commander Peter Gadet and the head of the government’s presidential guard, Marial Chanuong, and have since sanctioned two other commanders. On July 10 the European Union imposed travel bans and asset freezes on on Gadet and a government SPLA commander, Santino Deng. The African Union (AU) Peace and Security Council said in December 2013 it intended “to take appropriate measures including targeted sanctions” against South Sudanese leaders who commit human rights abuses or incite violence.

UNMISS opened its gates to civilians fleeing the fighting and has sheltered over 100,000 civilians in its bases. The UN peacekeepers have not, however, been able to prevent many of attacks on civilians around their bases. A swifter military response by peacekeepers during an attack on their base in Bor in April may have prevented some casualties.

A report by the AU Commission of Inquiry in South Sudan (AUCISS)—headed by former Nigerian President Olusegun Obasanjo and mandated to investigate serious crimes committed in violation of law and make recommendations on accountability— anticipated issuing its report before the end of 2014. The UN secretary-general also stressed the need to exclude amnesty for serious crimes in any peace agreement at a September high-level ministerial event on South Sudan.

On December 24, 2013, the UN Security Council authorized the deployment of 5,500 more peacekeeping forces, bringing the total authorized to 12,500. In May, it changed the mission’s mandate, prioritizing protection of civilians, human rights monitoring, investigations and public and regular reporting. By October 2014, there were close to 10,500 soldiers under UNMISS in South Sudan.

The UNMISS Human Rights Division released a May report concluding that there are “reasonable grounds” to believe crimes against humanity had occurred. The report recommended that any national justice process “be complemented by international assistance through a special or hybrid court” to ensure accountability and help build the capacity of national institutions.