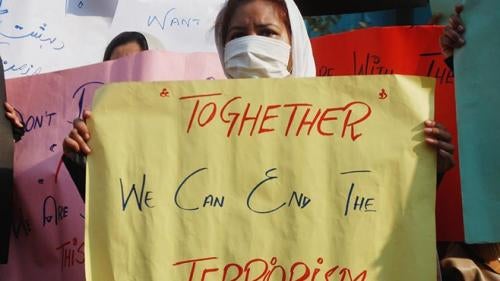 Pakistan had a tumultuous year in 2014. Sectarian attacks continued with impunity, military operations in North Waziristan displaced more than one million people, and massive floods wrought devastation in Sindh and Punjab provinces. Political instability reached a crisis point in August and September, as prolonged and violent opposition protests threatened to undermine gains achieved by the country’s first civilian transfer of power following the May 2013 election of Nawaz Sharif as prime minister.

The protests in Islamabad—led by opposition politicians Imran Khan and Dr. Tahir-ul-Qadri, who demanded Sharif’s resignation and the formation of a new government—prompted violence by both protesters and the security forces that resulted in at least three deaths and hundreds of injuries. The government responded to the protests by imposing a state of emergency in Islamabad and suspending fundamental rights such as the right to petition the courts to enforce constitutional guarantees. During the height of the crisis, the military intervened at the government’s request, allowing it to dangerously reinsert itself into democratic political decision-making.

Violent attacks on religious minorities, fostered in part by the institutionalized discrimination of the “blasphemy laws,” continued. Ongoing rights concerns in Balochistan province related to enforced disappearances, extrajudicial killings, and torture remained unaddressed. Lack of government response to continuing abuses by the security forces in Balochistan fostered a long-standing culture of impunity.

In July, the government passed the Protection of Pakistan Act (PPA), an overly broad counterterrorism legislation that violates international human rights standards and creates a legal pretext for abuses by the security forces without accountability. The PPA violates the right to fair trial by shifting the onus of proof on the accused in certain circumstances, and granting powers of arbitrary arrest and preventive detention to the security forces.

Following a June 8 attack by militants at Jinnah International Airport in Karachi that killed more than 18 people, the military on June 30 launched an offensive in North Waziristan involving more than 30,000 troops. Severe military restrictions on independent media access to the conflict zone made it difficult to assess civilian casualty figures.

The conflict has displaced an estimated one million people in squalid displacement camps. The government has not adequately responded to their health needs. According to the United Nations High Commissioner for Refugees (UNHCR) Pakistan country representative in July, lack of potable water, sanitation facilities, and health care in the main internally displaced persons camp in the city of Bannu in Khyber Pakhtunkhwa province has led to the spread of communicable disease outbreaks.

The military offensive prompted the Punjabi faction of the Threek-i-Taliban Pakistan (TTP) in September to surrender and renounce terrorist attacks inside Pakistan. However, the TTP has said it will focus future violent attacks on military and government targets in Afghanistan.

The militant group Lashkar-e-Jhangvi (LeJ) continued attacks on Shia Hazaras in Balochistan. The government failed to successfully prosecute and imprison suspects, in part due to sympathy for the group within the security forces. In June, twin suicide attacks in Taftan near Pakistan’s border with Iran killed 24 Shia pilgrims and injured 18. The Sunni militant group Jaish-ul-Islam claimed responsibility, but authorities had not made any related arrests at time of writing.

Section 295-C of Pakistan’s penal code makes the death penalty mandatory for blasphemy, although no one has yet been executed for the crime. The Pakistani government failed to amend or repeal the blasphemy law provisions that provide a pretext for impunity and violence against religious minorities. Since 1990, at least 60 people have been murdered after being accused of blasphemy. At present, 17 people convicted of blasphemy are on death row; 19 others are serving life sentences.

In March 2014, a Lahore court sentenced Sawan Masih to death for blasphemy after he was accused of making derogatory statements regarding the Prophet Muhammad. In April 2013, those allegations prompted a 3,000-strong mob to attack a Christian residential community in Lahore and torch hundreds of houses. Police arrested Masih, but failed to otherwise intervene.

In July, a mob in Gujranwala burned down houses of the Ahmadi community killing three people and injuring eight others over alleged blasphemy. The provisions of Pakistan’s penal code, which perpetuate discrimination against the Ahmadis, remain unchanged: the code explicitly prohibits Ahmadis from “indirectly or directly posing as a Muslim”; declaring or propagating their faith publicly; building mosques or referring to them as such; or making public calls to prayer.

In September, the government announced that police had arrested the attackers of 17-year-old Malala Yousafzai, a student and outspoken advocate for children’s right to education, who was shot in an attack claimed by Tehreek-e-Taliban Pakistan on October 9, 2012. She subsequently recovered from her serious injuries and, in October, became the youngest person to ever receive the Nobel Peace Prize.

In a notorious case, 25-year-old Farzana Parveen, who was three-months pregnant, was stoned to death in May in front of a Lahore courthouse by family members angry that she had married without their permission. Perpetrators of these killings often enjoy impunity because law enforcement officials routinely drop the case if the victim’s family has offered “forgiveness.” Intimidation and threats against women and girls who venture out in public places or take public roles continued in 2014.

Women who are members of religious minorities are particularly vulnerable. A report by the Movement for Solidarity and Peace in Pakistan found that at least 1,000 girls belonging to Christian and Hindu communities are forced to marry male Muslims every year. The coercion often originates from the prospective bridegrooms’ families, and failure to comply can prompt serious violence against the girls and their families. The government has failed to act to stop such forced marriages.

The human rights situation in Balochistan remained abysmal. Despite the May 2013 election of a civilian government, the military has retained all key decision-making functions in the southwestern province and blocked efforts by civil society organizations and media to cover ongoing violence there.

Enforced disappearances linked to the security forces continued with impunity. On March 18, plainclothes gunmen later identified as belonging to Pakistan’s paramilitary Frontier Corps allegedly abducted Zahid Baloch, chairperson of the Baloch Student Organization-Azad in the provincial capital, Quetta. Baloch’s whereabouts and safety remained unknown at time of writing. Despite rulings from the Pakistan Supreme Court in 2013 demanding justice for victims of enforced disappearances, as well as recommendations from the UN Working Group on Enforced or Involuntary Disappearances in 2012, Pakistan’s government has failed to meet its obligations under the constitution and international law prohibiting enforced disappearances.

Accountability of law enforcement agencies showed no signs of improving in 2014. In June, one of the most egregious incidents of excessive use of force against political protesters occurred in Model Town, a Lahore suburb. Police fired without warning on supporters of the Pakistan Awami Tehreek (PAT), an opposition political party, whose workers had tried to stop police demolition of security barriers erected in front of PAT headquarters. Authorities confirmed the deaths of at least eight PAT members. Another 80 PAT members were injured.

In July, the government enacted new repressive counterterrorism legislation. The Protection of Pakistan Act (PPA) is an extremely broad and ambiguously worded document that grants the security forces broad powers to implement preventive detention and carry out arrests without warrants. Such provisions can easily provide legal cover for abuses by law enforcement agencies and open the door for the violation of fundamental rights to freedom of speech, privacy, peaceful assembly, and a fair trial.

Freedom of expression and media came under severe pressure from both state and non-state actors in 2014.

In April, unidentified gunmen attacked Hamid Mir, one of Pakistan’s most famous television presenters, in Karachi. Mir survived the attack and Jang/Geo—his employer and the country’s largest media conglomerate— accused the director general of the military’s powerful Inter Service Intelligence (ISI) of involvement in the incident. The ISI denied the allegation and the central government punished Jang/Geo for the accusation by suspending its broadcast license and taking its channels off the air for 15 days.

Unidentified assailants also attacked the offices and employees of the media group. Other attacks on journalists in 2014 included the March shooting by unidentified gunmen of Raza Rumi, a prominent columnist and television anchor in Lahore. Rumi was injured in the attack, which killed his driver. At time of writing the police had yet to arrest any of the gunmen, who are suspected of belonging to the LeJ.

Relations with the United States, Pakistan’s largest donor of development and military aid, showed signs of improvement after years of disagreement and mistrust. While Prime Minister Sharif’s US visit in October 2013 did not achieve any notable short-term diplomatic objectives, it did serve as a confidence-building measure between the two countries.

Pakistan’s alleged persistent support for the Haqqani network, a militant group that US officials accuse of targeting US troops in Afghanistan, continued to undermine bilateral relations. Nonetheless, the US voiced public support for Sharif’s government during the protests and sit-ins in Islamabad by issuing statements in favor of the democratic process.

Historically tense relations between Pakistan and India continued despite Sharif’s visit to India in August to attend the inauguration of Indian Prime Minister Narendra Modi. Persistant tensions include security issues and longstanding disputes over the distribution of water from rivers that run through both countries.

Pakistan and China continued to deepen already extensive economic and political ties, although the relationship suffered a setback when Chinese President Xi Jinping postponed a scheduled visit in August due to the protests in Islamabad.