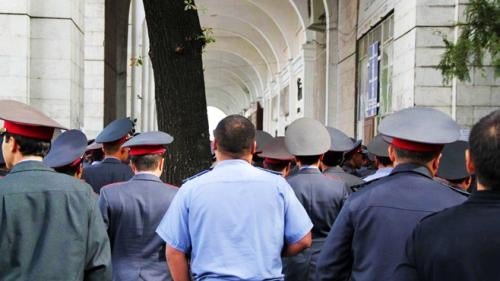 Discriminatory legislative proposals, including related to “foreign agents” and “homosexual propaganda,” persistent impunity for ill-treatment and torture, and shortcomings in law enforcement and the judiciary undermine and erode democratic progress that Kyrgyzstan has made in recent years. Impunity for violence and discrimination against women and lesbian, gay, bisexual, and transgender (LGBT) people remains pervasive. Freedom of expression and assembly also suffered setbacks in 2014.

Attacks on defendants and lawyers in courts continued in 2014. Rights defender Azimjon Askarov remained wrongfully imprisoned at time of writing, despite his renewed attempts during the year to have a court review his case.

Since the outbreak of ethnic violence in June 2010, Kyrgyzstan’s flawed justice process has produced long prison sentences for mostly ethnic Uzbeks after convictions marred by torture-tainted confessions and other due process violations. Seven further cases related to crimes committed during the violence are pending, including that of a man detained in July 2014. All defendants are ethnic Uzbeks, reinforcing concerns of judicial bias.

On August 11, Kyrgyzstan’s Supreme Court declined to grant Turkish national Ahmet Gunan a retrial despite a United Nations Human Rights Committee 2011 decision finding violations of the International Covenant on Civil and Political Rights. The committee noted that Kyrgyzstan is obligated to remedy the violations, including by releasing Gunan or granting him a retrial, and by providing full reparation, including appropriate compensation.

Although the government acknowledges that torture occurs in Kyrgyzstan, impunity for torture remains the norm. Criminal cases into allegations of ill-treatment or torture are rare, and investigations and trials are delayed or ineffective.

In its June concluding observations, the UN Committee on the Rights of the Child (CRC) expressed concern about “widespread torture and ill-treatment of children” in detention and closed institutions and called for prompt and effective independent investigations.

According to statistics provided by the Prosecutor General’s Office to Golos Svobody, a local anti-torture group, authorities declined to open criminal investigations into 100 of 109 registered complaints of torture in the first half of 2014.

Monitors from the National Center for the Prevention of Torture encountered some problems accessing places of detention. After one incident in March, the center filed a complaint against the director of the Issyk Kul region temporary detention facility for refusing the monitors entry, but at time of writing the director had not been held accountable.

In May, two draft laws were registered in parliament that would restrict the work of nongovernmental organizations (NGOs) and endanger freedom of association in Kyrgyzstan. On May 19, the Justice Ministry proposed “banning” unregistered NGOs, but in November it withdrew the proposed provision. On May 26, parliament deputies registered a bill that would require foreign-funded domestic NGOs engaging in “political activities” to register as “foreign agents” and would create criminal liability for leaders of organizations “whose work incites citizens to refuse to fulfill their civic duties or commit other unlawful acts.” At time of writing, parliament had not yet considered the bill.

Civil society activists were harassed via media and physically attacked in 2014. In February, threats were made against an LGBT activist over social media networks after he participated in a Human Rights Watch report release. On March 5, two feminist activists who set up an equal rights stand near a central bazaar were attacked people in a crowd who confused the female gender symbol for a cross and accused the activists of proselytizing.  The activists filed a complaint, but authorities twice declined to open a case.

On September 4, Makhamajan Abdujaparov, a senior lawyer at Spravedlivost, a Jalalabad-based rights NGO, was attacked in his office by an unidentified assailant who accused Abdujaparov of cutting him off on the road. Abdujaparov filed a complaint, but was pressured to withdraw it. The man was identified as a National Security Agency (GKNB) officer.

In late September, the GKNB opened a criminal investigation into allegations that a survey on the rights of ethnic minorities in southern Kyrgyzstan conducted by a local group with the support of US-based rights organization Freedom House would incite inter-ethnic discord. The groups challenged the legality of the investigation, but an Osh court rejected their suit. The investigation remained ongoing at time of writing.

Azimjon Askarov, a human rights defender, continues to serve a life sentence after being wrongfully convicted on charges related to the June 2010 violence. His prosecution was marred by serious violations of fair trial standards and allegations of torture. In February, the Prosecutor General’s Office declined to reopen his case following a nine-month-long review. After multiple appeals, on September 3 the Supreme Court upheld the decision. Askarov’s November 2012 complaint to the UN Human Rights Committee was under review at time of writing.

Kyrgyzstan backtracked on freedom of speech by adopting a new law in May effectively reintroducing criminal libel. Organization for Security and Co-operation in Europe (OSCE) Media Freedom Representative Dunja Mijatovic had called on the president to veto the bill. The US embassy said the law “tarnished Kyrgyzstan’s image as an emerging democracy.”

On August 17, several assailants attacked Davron Nasipkhanov, a journalist in Osh, outside his home. They called him “sart,” a derogatory term for Uzbek, and said that “sarts” should be killed. Authorities opened an investigation but had not pressed charges at time of writing.

Authorities have not effectively addressed longstanding problems of gender-based violence. Violence and abduction for forced marriage (bride-kidnapping) remain pervasive forms of violence against women and girls in Kyrgyzstan. Impunity remains the norm. Work on a new domestic violence law was ongoing at time of writing.

In June, the CRC noted 2013 Criminal Code amendments increasing sanctions for kidnapping child “brides” younger than 17, and fewer such incidents, but called on Kyrgyzstan to ensure effective investigations, accountability for abuses, and redress for victims.

LGBT people in Kyrgyzstan experience abuse and discrimination from both state and non-state actors. Police violence and harassment against LGBT people includes extortion, ill-treatment, and sexual violence such as rape, including with external objects. Due to widespread homophobia in Kyrgyzstan and fear that personal information will be disclosed, most LGBT victims of police abuse do not file reports.

On October 15, parliament passed in its first reading a homophobic and blatantly discriminatory bill that would impose criminal and administrative sanctions for “creat[ing] a positive attitude toward nontraditional sexual relations” in media or public assemblies. The Anti-Discrimination Coalition, a network of LGBT and other rights groups, collected nearly 800 signatures for an open appeal urging legislators to reject the bill. The US embassy, the OSCE media freedom representative and the Office of the High Commissioner for Human Rights spoke out against the adoption of the bill.

A court banned all public assemblies in Ala Too Square and other central locations in Bishkek from March 31 to May 1 to prevent “destabilization of the sociopolitical situation by destructive forces.” Local rights groups urged authorities to reverse the ban on violating Kyrgyzstan’s law on peaceful assemblies. The ban was lifted in April after an appeal by the prosecutor general.

According to Forum 18, a religious freedom watchdog, harassment continued in 2014 of minority religious communities, including Jehovah’s Witnesses and Ahmadi Muslims, who in 2013 were refused registration by the State Commission for Religious Affairs (GKDR). In July, the GKDR withdrew work permission from the bishop of the Russian Orthodox Church on the grounds that he “threatens the public security of Kyrgyzstan and sows religious discord.”

Lawyers told Human Right Watch that authorities in the south continue to arbitrarily detain individuals on extremism-related charges and that they are particularly vulnerable to ill-treatment and torture in custody.

At a roundtable in October, rights activists in Bishkek raised concern that a draft religion law, if adopted, would restrict the right to freedom of religion and belief, for example, by requiring additional licensing and re-registration requirements of religious workers.

In April, the Parliamentary Assembly of the Council of Europe granted Kyrgyzstan partnership for democracy status, despite a pending propaganda bill that contravenes Council of Europe norms. The accompanying resolution highlighted key areas of concern that Kyrgyzstan was expected to address to strengthen respect for human rights, including rejecting the propaganda law and other laws aimed at limiting civil society.

In its April concluding observations, the UN Human Rights Committee noted serious concerns about violence against LGBT persons and the need for a comprehensive approach to prevent and address violence against women, strengthen efforts to tackle torture and ill-treatment, and ensure the right to freedom of expression and association.

During its annual human rights dialogue with Kyrgyzstan in April, the European Union expressed “serious concerns” about reports of ill-treatment and torture, fair trial shortcomings, discrimination against minority groups, mistreatment of LGBT people, and draft legislation that would restrict civil society.

At the EU-Kyrgyzstan Cooperation Council meeting in November, the EU called on Kyrgyzstan “to pursue reforms leading to transparency, independency of the judiciary, inter-ethnic reconciliation and respect for human rights.”

In June, the CRC issued a comprehensive list of recommendations. It called on Kyrgyzstan to take urgent measures to prevent discrimination against marginalized and disadvantaged children, including in minority groups, and to ensure that children from minority communities, especially Uzbeks, have unrestricted access to education in their native language.