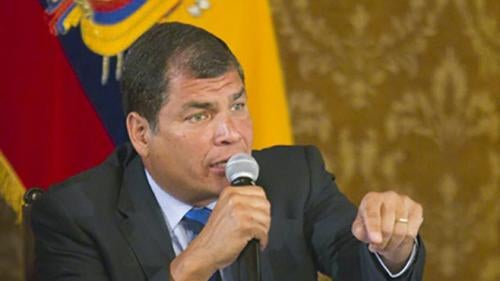 The administration of President Rafael Correa has expanded state control over media and civil society. In 2014, tactics included criminal defamation prosecutions and administrative sanctions against critical journalists and media outlets, and aggressive efforts to discredit human rights advocates within the country.

A judicial council currently made up entirely of former members of the Correa administration has appointed and removed hundreds of judges through highly questionable methods, posing a serious threat to judicial independence.

In October, the Constitutional Court ruled that Congress could initiate a process to amend 16 articles of the constitution, including reforms that would grant the armed forces powers to participate in public security operations, grant the government broad regulatory powers over “communications” by calling them a “public service,” and allow for unlimited re-election of the president.

Excessive Use of Force Against Protesters

In September, security force response to largely peaceful demonstrations in Quito included many instances of excessive force and arbitrary detention of protesters and bystanders. Dozens of detainees suffered serious physical abuse, including severe beatings, kicks, and electric shocks, during arrest and detention. A minority of protesters engaged in violence, clashing with police and leaving more than 30 officers injured.

Within 24 hours of being detained, more than 100 detainees were brought before judges and charged with offenses such as attacking or resisting authority and damaging public or private property. Detainees were not informed of the charges against them before the hearings and had no contact with family members or lawyers until immediately before the hearings.

The government responded to reports and allegations of abuse by publicly congratulating the National Police on their role during the protests, threatening to prosecute lawyers who reported human rights violations, and challenging media outlets that published information on the abuses.

A 2013 Communications Law gives the government broad powers to limit free speech. The law requires that all information disseminated by media be “verified” and “precise,” opening the door to censorship by allowing the government to decide what information meets these vague criteria. It also prohibits “media lynching,” defined as “repeatedly disseminating information with the purpose of discrediting or harming the reputation of a person or entity.” And it prohibits censorship, which it defines to include the failure of private media outlets to cover issues that the government considers to be of “public interest.” In September 2014, the Constitutional Court rejected key challenges to the constitutionality of the law.

The Superintendency of Information and Communication, a government regulatory body created by the Communications Law, has repeatedly ordered media outlets and journalists to rectify or publicly apologize for publishing information and opinions it considers to be untruthful. For example, in January, it ordered a cartoonist known as Bonil to “amend” a cartoon that depicted police searching the house of a journalist who had been convicted of defaming Correa. The Superintendency also ordered the newspaper that had published the cartoon, El Universo, to pay a fine of approximately US$140,000.

A new criminal code that entered into force in August 2014 eliminates several defamation provisions, but retains slander, a criminal charge used repeatedly by Correa to target his critics. In January, the National Court of Justice upheld the conviction for slander of Cléver Jiménez, an opposition legislator; Carlos Figueroa, a union leader; and Fernando Villavicencio, a journalist and union leader.

The three had asked the attorney general to investigate Correa for allegedly ordering an armed assault on a hospital during a September 2010 police mutiny that the government considered an attempted coup. The court sentenced Jiménez and Villavicencio to 18 months in prison, and Figueroa to 6 months. It ordered them to publicly apologize to the president and pay him approximately $145,000. Figueroa was arrested in July, while Jiménez and Villavicencio remained at large at time of writing.

The Correa government frequently requires private media outlets to transmit official broadcasts responding to unfavorable news coverage or opinions. For example, in December 2013, it required radio stations to interrupt their morning news programs to air an official broadcast responding to critical statements by Sister Elsie Monge of the Ecumenical Commission of Human Rights. The broadcast said that in “no cases” had Ecuador violated human rights.

Online service providers have blocked videos, photos, and accounts criticizing the Correa administration after a firm in Spain claimed they violated US copyright laws. Even though Ecuadorian authorities have denied involvement, the notices sent to request the takedowns state that the firm represented Ecuadorian state actors. In October 2013, YouTube blocked access for several weeks to a documentary purporting to show harassment of the Íntag community for its opposition to mining activities in the area. The firm in Spain argued that using images from Ecuador’s public TV violated copyright law.

Corruption, inefficiency, and political influence have plagued Ecuador’s judiciary for years. With a popular mandate following a 2011 referendum, the Correa administration initiated a sweeping judicial reform process to address these chronic problems. As a part of this process, however, the Council of the Judiciary appointed and removed hundreds of judges, including all magistrates of the National Court of Justice, through highly questionable mechanisms that undermine judicial independence.

A report published in July by three international NGOs—the Due Process of Law Foundation, Dejusticia, and the Institute for Legal Defense—documented routine executive interference with judicial decisions, misuse of the penal system to target individuals who question the government's policies, and misuse of the judiciary’s internal disciplinary system to sanction judges whose rulings were inconsistent with the Correa administration’s policies.

Sweeping provisions of the “sabotage and terrorism” chapter in the criminal code have been repeatedly applied by prosecutors against protesters. The provisions have been used to convict more than 100 people for participating in allegedly violent protest activity during the police mutiny in September 2010.

In March 2014, María Alejandra Cevallos, a university student, was sentenced to four years in prison. Cevallos was one of several protesters who was accused of forcibly entering the offices of the public television channel during the mutiny—after the government had ordered all the other stations to transmit its programming—to demand an opportunity to speak to the public. Another student was sentenced to two years in prison as an accomplice because “with his applause he externalized his general agreement with the [group’s] actions.”

In April, three women protesting with other mostly female demonstrators outside a prison in Quito against prisoners' transfer were detained and charged under the sabotage and terrorism provisions. According to a police report, the protesters had “shouted ‘torturer’ at [the interior minister] and for this reason the minister ordered the immediate detention of three citizens.” The three women spent 18 days in prison before a prosecutor dropped the charges.

In 2013, President Correa issued a sweeping executive decree that grants the government broad powers to intervene in NGO operations, including dissolving groups on the grounds that they have “compromise[d] public peace” or have engaged in activities that are different from the activities they identified when registering with the government.

In December 2013, the government dissolved the Pachamama Foundation, an NGO that had engaged in environmental and human rights advocacy for more than 16 years, on the grounds that several of its members had allegedly participated in a violent demonstration against oil drilling in the Amazon region. Pachamama was not given advanced notice of the dissolution, and its legal challenges to the order were all rejected.

The government has routinely sought to discredit civil society groups by accusing them of seeking to destabilize the government. In April, Correa accused members of Yasunidos, a grassroots environmental group, of being liars, incoherent, and “rock throwers.” Yasunidos had collected more than 700,000 signatures for a referendum on whether the Yasuni National Park in the Amazon should be opened to further oil exploration.

Efforts to hold Ecuadoran officials to account for human rights violations committed from 1984 to 2008 continued to make slow progress. In 2014, a court ruled that statutes of limitations do not apply to gross human rights violations, and Edgar Vaca, a key former police commander accused of committing crimes against humanity during León Febres Cordero’s presidency (1984-1988), was detained in the United States. His extradition was pending at time of writing.

In 2010, a special prosecutorial unit was formed to investigate 118 cases involving 456 victims (including 68 victims of extrajudicial execution and 17 of enforced disappearance) documented by a truth commission created by the Correa administration. At time of writing, prosecutors had brought charges in seven cases, including two in which suspects were convicted and one in which they were acquitted.

The right to seek an abortion is limited to instances in which the woman’s health or life is at risk or when pregnancies result from the rape of a “woman with a mental disability.” Fear of prosecution drives some women and girls to have illegal and unsafe abortions, and impedes health care and post-rape services for victims of sexual violence. Fear of prosecution also hinders detection and prevention of sexual and gender-based violence. One in four women over 15 years old in Ecuador has been a victim of sexual violence, according to official statistics.

According to the latest available official statistics, from 2013, Ecuador has nearly 55,000 registered refugees, the largest number of any Latin American country. Most are Colombians fleeing armed conflict.

In September, the Constitutional Court ruled that several provisions of a 2012 presidential decree regulating asylum procedures were unconstitutional. The court ruled that the decree’s definition of “refugee” was too narrow and was inconsistent with the definition set forth in the 1984 Cartagena Declaration on Refugees. It also extended the deadline to file an asylum request to three months after the petitioner’s entry, and provided additional protections for appeal of asylum decisions, stating that refugees cannot be returned until a judge has made a final decision on the case.

The ruling, however, upheld other problematic provisions of the decree, including unfair procedures for determining which asylum claims should be deemed “manifestly unfounded,” and overly broad powers to revoke refugee status.

Ecuador, with the support of members of the Bolivarian Alliance for the Americas (ALBA), continued to engage in an international campaign to undermine the independence of the Inter-American Commission on Human Rights, especially the office of its special rapporteur on freedom of expression. The government failed to participate in public hearings on Ecuador convened by the commission, and announced it would not comply with precautionary measures ordered by it. In January, Correa suggested again that Ecuador might leave the Inter-American Human Rights system.

The United States Agency for International Development (USAID) and the Konrad Adenauer Stiftung (KAS), a German political party foundation, shut their offices in Ecuador in September. USAID stated that this was a “result of the Government of Ecuador’s decision to prohibit approval of new USAID assistance programs,” while KAS cited the “increasing control and influence of the government in the political work of foundations and NGOs.”