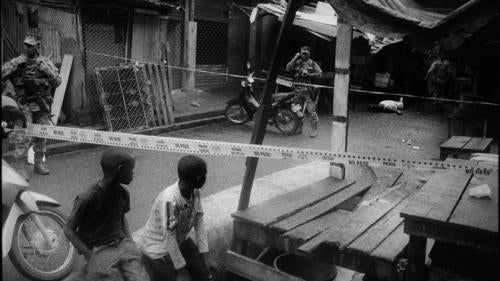 The Santos administration continues to promote several bills that would undercut accountability for unlawful killings of civilians by the military, including so-called false positive killings. The proposed legislation creates a serious risk that such cases will be transferred from the civilian to the military justice system, which lacks independence and has a very poor record investigating human rights violations.

The Colombian government and Revolutionary Armed Forces of Colombia (FARC) guerrillas have been engaged in peace talks in Cuba since 2012; at time of writing they had reached an agreement on three of the six items on the negotiating agenda. On June 10, the government and National Liberation Army (ELN), Colombia’s second largest guerrilla group, announced they had begun exploratory peace talks.

In March, the government removed the mayor of Bogotá from office despite a legally binding precautionary measure issued by the Inter-American Commission on Human Rights calling for it not to do so. President Santos subsequently implemented a court order to reinstate the mayor.

FARC guerrillas routinely attack civilians. For example, in Tumaco municipality in southwest Colombia, the FARC was responsible for widespread abuses in 2013 and 2014, including killings, disappearances, torture, sexual violence, forced displacement, recruitment of children, extortion, and death threats against community leaders. In one case from June, there is compelling evidence that FARC members abducted, tortured, and killed Mónica Julieth Pernia, a 25-year-old Tumaco resident.

The ELN also continues to commit serious abuses against civilians, such as killings, abductions, and child recruitment. On September 15, 2014, the ELN shot dead two oil workers who were inspecting a pipeline in the northeastern municipality of Teorama.

The FARC and ELN continue to use antipersonnel landmines. The government reported that landmines and unexploded ordnances killed 6 civilians and injured 65 between January and August 2014.

Between 2003 and 2006, right-wing paramilitary organizations with close ties to security forces and politicians underwent a deeply flawed government demobilization process in which many members remained active and reorganized into new groups. Successor groups to paramilitaries, often led by members of demobilized paramilitary organizations, commit widespread abuses, such as killings, disappearances, and sexual violence.

In Buenaventura, a largely Afro-Colombian port on the Pacific coast, paramilitary successor groups such as the Urabeños continue to commit atrocities, including abducting and dismembering people. The groups have caused Buenaventura to have the highest rate of forced displacement in Colombia, with more than 33,000 residents fleeing their homes in 2013, and 22,383 between January and November 1, 2014, according to government data released in November.

The groups have at times benefited from the tolerance and collusion of state agents. In March, prosecutors ordered the arrest of retired army Col. Robinson González del Río for allegedly leading a network of active and retired security force members that sold weapons to the Urabeños.

Implementation of the Justice and Peace law, which offers dramatically reduced sentences to demobilized paramilitaries who confess their crimes, has been very slow. As of September 2014, only 37 of the more than 30,000 paramilitaries who officially demobilized had been convicted of crimes under the Justice and Peace law—9 years after it was approved. The convictions cover a small portion of the nearly 70,000 crimes confessed by defendants seeking the law’s benefits.

“Parapolitics” investigations into current and former members of Congress accused of conspiring with paramilitaries continued: more than 55 legislators have been convicted since 2006.

On September 17, 2014, the Colombian Senate held a debate about alleged links between paramilitaries and former President Álvaro Uribe (2002-2010), who became a senator in 2014.

During the Uribe administration, Colombian military personnel executed large numbers of civilians, particularly between 2002 and 2008. In many cases—commonly referred to as “false positives”—soldiers and officers under pressure from superiors to boost body counts killed civilians and reported them as enemy combat casualites. There has been a dramatic reduction in cases of alleged unlawful killings attributed to security forces since 2009; nevertheless, there were credible reports of some new cases in 2013 and 2014.

The government does not keep statistics for “false positives” as a category of crime distinct from other types of unlawful killings. However, as of July 2014, the Human Rights Unit of the Attorney General’s Office was investigating more than 3,500 unlawful killings allegedly committed by state agents between 2002 and 2008, and had obtained convictions for 402 of them. The vast majority of the 785 army members convicted are low-ranking soldiers and non-commissioned officers. Some military personnel convicted of the crimes have enjoyed extravagant privileges in military detention centers.

The defense minister and senior military officials have taken actions to discredit false positive investigations. In September, after the media reported that prosecutors had requested that investigations be opened into nine current and former army generals for their possible role in false positives, the defense minister said “excessive attention” was being given to the testimony on which the prosecutors based their requests. In February, President Santos fired the head of the armed forces after Semana magazine published an audio recording from 2012 in which the general told an army colonel under prosecution for false positives to “create a mafia” to smear prosecutors.

In February, the head of army intelligence was removed from his post after Semana revealed that justice authorities had raided a location in Bogotá where military intelligence personnel were alleged to be illegally intercepting the communications of the government’s peace negotiators and others.

In 2013 and 2014, the defense minister submitted three different bills to Congress that would open the door to false positives being transferred from civilian prosecutors to the military justice system, which has long failed to hold perpetrators accountable. Under the bills, the military justice system would also handle other past and possible future human rights abuses by military personnel, as well as other serious crimes such as conspiring with paramilitaries or gangs to traffic drugs. One of the bills would authorize the security forces to use lethal force against civilians in a dangerously broad range of situations.

The bills are similar to a constitutional change to the military justice system that the Santos administration pushed through Congress in December 2012, which the Constitutional Court subsequently struck down on procedural grounds in October 2013.

In June 2012, the government secured Congressional approval of the Legal Framework for Peace constitutional amendment, which paves the way for widespread impunity for atrocities by guerrillas, paramilitaries, and the military if a peace agreement is reached with the FARC. The amendment empowers Congress to limit the scope of prosecutions of atrocities to individuals found “most responsible”—a category the amendment does not define—and provide statutory immunity to everyone else.

While the amendment also enabled Congress to fully suspend prison sentences for all guerrillas, paramilitaries, and military personnel convicted of atrocities, the Constitutional Court ruled in August 2013 that those “most responsible” for crimes against humanity could not have their penalties fully suspended. However, the amendment still allows for “alternative penalties,” and in April, Colombia’s attorney general proposed that top FARC commanders could receive an alternative penalty of community service instead of going to prison.

More than 5.7 million Colombians have been internally displaced since 1985, according to government figures. The government registered more than 220,000 newly displaced people in 2013.

The government’s implementation of land restitution under the Victims Law continues to be slow. The law was enacted in 2011 to restore millions of hectares of stolen and abandoned land to internally displace persons (IDPs). The government initially estimated that by the end of 2015 there would be judicial rulings in more than 150,000 land restitution cases under the Victims Law.

However, as of September 2014, the government had obtained land restitution rulings for just 1,546 of the nearly 68,000 claims it had received. As of September 2013, the government could only confirm three cases of families who had returned to live on their land due to rulings under the law. At time of writing, the land restitution office had not provided updated data on the number families who have returned to live on their land as result of the law.

IDPs face threats and violence for attempting to reclaim their land. No one has been held accountable for the majority of killings of land restitution claimants and leaders.

In June, the government enacted a law to improve access to justice and protection for sexual violence survivors, especially those who are raped or assaulted in the context of the internal armed conflict.

Rights advocates and journalists continue to be targeted for threats and attacks. The FLIP, a respected Colombian nongovernmental organization (NGO) that monitors press freedoms, reported 2 journalists killed and 75 threatened in 2013, and 58 victims of such threats between January and September 2014.

The National Labor School (ENS), Colombia’s leading labor rights NGO, continues to report killings of trade unionists. As of September 2014, the special prosecutorial unit dedicated to anti-union violence had opened investigations into more than 110 cases of trade unionist killings committed since 2009, but obtained convictions in just 9 of them.

The Inspector-General’s Office continued its disciplinary investigation against Congressman Iván Cepeda, a prominent victim’s rights advocate, for collecting information about possible paramilitary abuses and submitting it to justice authorities. The investigation, which relates to Congressman Cepeda’s interviews of ex-paramilitaries about former President Uribe’s alleged ties to paramilitaries, appears to be entirely unfounded and could have a chilling effect on others who seek accountability for human rights abuses.

The United States remains the most influential foreign actor in Colombia. In 2014, it provided approximately US$225 million in military and police aid, and $165 million in humanitarian and development aid. A portion of US military aid is subject to human rights conditions, including a requirement that civilian authorities investigate and try all alleged human rights violations. In September 2014, the State Department certified that Colombia met these conditions, despite the government’s continued promotion of legislation that would place human rights crimes in military courts, and the recent transfer of some such cases to the military justice system. The State Department justified its decision by saying that human rights cases are “generally” prosecuted in civilian courts, even though the condition requires that such crimes be subject “only” to civilian jurisdiction.

In August, the Inter-American Commission on Human Rights published an extensive report on Colombia, which raised serious concerns over the Legal Framework for Peace and military justice system reforms, among other issues.

The office of the prosecutor (OTP) of the International Criminal Court (ICC) continues to monitor local investigations into crimes that may fall within the ICC’s jurisdiction. In November 2013, the OTP reported that there is reason to believe that false positives were committed “pursuant to a policy adopted at least at the level of certain brigades within the armed forces,” and that it was continuing to analyze whether the policy extended to higher-level state officials.