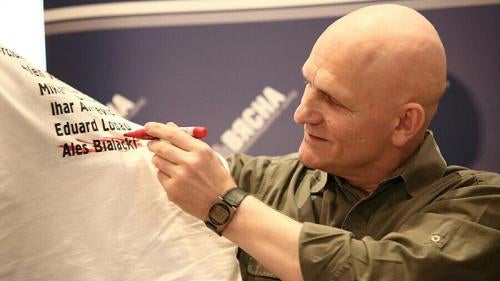 Belarusian authorities made no meaningful improvements in the country’s poor human rights record in 2014. President Aliaxander Lukashenka’s government continues to severely restrict freedom of expression and association, including by harassing journalists and imposing restrictive legislation on  nongovernmental organizations (NGOs). Legislative amendments during the year simplified the reporting requirements for NGOs, but introduced new pretexts for liquidating them.

Authorities arbitrarily detained activists to prevent them from participating in public events, including before the May International Ice Hockey Federation World Championship. Belarus courts sentenced four people to death and executed two of the men, one of whom had a case challenging the legality of the sentence pending decision before the United Nations Human Rights Committee. The authorities released human rights defender Ales Bialiatski who had spent almost three years in prison on politically motivated charges. Members of the lesbian, gay, bisexual, and transgender (LGBT) community face deep-rooted homophobia and discrimination.

Belarus remains the only European country to have the death penalty. In April, authorities executed by firing squad Pavel Sialiun, whom a regional court sentenced to death in June 2013 for murder and theft, among other charges. The Supreme Court upheld the sentence. Sialiun was executed despite a pending case before the UN Human Rights Committee challenging his conviction and sentence. The exact date of Sialiun’s execution is not known. Sialiun’s mother learned of her son’s death from his lawyer.

In May, authorities executed Ryhor Yuzepchuk, sentenced to death in April for murder. At time of writing, two other men remained on death row after the Supreme Court upheld their death sentences.

In April, the UN special rapporteur on Belarus expressed concern at the lack of transparency surrounding Belarus’ death penalty system, and in October 2013, stated that “the way the death penalty is carried out in Belarus amounts to inhuman treatment.”

Arrests and Harassment of Human Rights Defenders and Critics

According to rights groups, seven people remain in detention following politically motivated prosecutions. These prisoners are regularly subjected to undue restrictions on correspondence and meetings with families, psychological pressure, and other forms of ill-treatment as punishments.

At least 33 former political prisoners, who were pardoned by the government, still face restrictions and harassment by authorities. The criminal records have not been expunged, preventing them from occupying governmental jobs or standing in elections. Some have been forbidden from leaving Belarus. Those pardoned or released before serving their full sentences remain on law enforcement agencies’ “preventative watch lists,” which authorize police to question them frequently.

In November, authorities annulled the residence permit of Elena Tonkacheva , a top Belarusian human rights lawyer and Russian national who had lived in Belarus for over 30 years, for speed limit violations.

The authorities continue to arbitrarily detain civil and political activists to prevent them from attending peaceful rallies, and ahead of important public events. Between April 22 and May 25, police detained at least 43 civil society and human rights activists on misdemeanor charges, detaining some as they walked on the street or drove to events. Administrative courts ordered up to 25 days of detention for all activists, some of whom were denied access to a lawyer. Most court rulings contained identical language alleging hooliganism, disobeying police orders, or both. The “preventative” arrests coincided with the annual Minsk march commemorating the 1986 Chernobyl nuclear disaster and the International Ice Hockey Federation World Championship.

Authorities routinely harass and interfere with the work of independent and opposition journalists and bloggers. According to the Belarusian Association of Journalists, since the beginning of 2014, authorities arbitrarily detained 15 journalists. For example, in March, Minsk police detained seven journalists covering a protest near the Russian embassy against Russia’s annexation of Crimea. Courts charged at least three of them with misdemeanor “hooliganism” and imposed fines and up to 10 days’ detention.

Law enforcement officials initiated misdemeanor proceedings against three independent journalists because of their cooperation with foreign media outlets not registered in Belarus, and threatened six others with similar charges. In April, a court fined a reporter for Belsat, a Poland-based satellite television station known for its critical reporting of Belarus, approximately US$428.

In June, authorities initiated a criminal investigation on libel charges against human rights activist Yekaterina Sadovskaya after she criticized, in a Minsk court visitors’ comments book, the authorities’ harassment and detention of activists ahead of the International Ice Hockey Federation World Championship. Authorities alleged the comment was “degrading” to President Lukashenka. If convicted, Sadovskaya faces a fine or up to three years in prison.

Authorities continued to enforce repressive legislation that criminalizes involvement in an unregistered organization, and at the same time arbitrarily refused to register opposition political groups, human rights, and other groups critical of the government.

In January, the prosecutor’s office issued a warning to the Belarusian Christian Democratic party’s organizing committee chairman for acting on behalf of an unregistered group and reminded him of criminal liability. The party has attempted to register at least four times since it was established in 2009, but authorities repeatedly denied registration requests on arbitrary pretexts.

In August, the Ministry of Justice refused to register the Movement for the Implementation of the International Covenant on Civil and Political Rights, Pakt  (Covenant), citing minor spelling errors in the group’s application.

Amendments to the legislation governing NGOs adopted in November 2013 decreased the number of documents required for NGO registration and simplified the process for registering international organizations, but introduced the failure to submit an annual report within three years as additional grounds for authorities to liquidate organizations.

Key international actors, including the European Union, the Organization for Security and Co-operation in Europe (OSCE), the United Kingdom, and United States welcomed the release of Ales Bialiatski. The chair of the OSCE Parliamentary Assembly’s Ad Hoc Working Group on Belarus called Bialiatski’s release “hopefully a sign of more to come” and urged Belarus to immediately release all those imprisoned on politically motivated charges and to demonstrate “genuine commitment to upholding OSCE commitments, particularly in the spheres of democracy and human rights.” The US State Department spokesperson, welcoming Bialiatski’s release, stated that such actions would “pave the way for normalization of relations between the United States and Belarus.”

The government continued to actively oppose the mandate of UN Special Rapporteur on Belarus Miklos Haraszti, insisting that it is political. Ever since the UN Human Rights Council appointed a special rapporteur for the country in 2012, Belarus authorities have refused to cooperate with him and have repeatedly denied him a visa. During its June session, the council extended the rapporteur’s mandate for one year.

In February, the government announced that it would grant access to a number of UN special procedures mandate holders, including the special rapporteurs on freedom of expression, freedom of religion, and the independence of judges and lawyers. At time of writing, the invitations had not been issued.

In its concluding observations from its November 2013 review, the UN Committee on Economic, Social and Cultural Rights urged Belarus to abolish compulsory labor for persons deprived of their liberty, persons affected by alcoholism, or drug dependent persons who are interned in so-called medical labor centers, and parents who have had their parental rights removed.

The committee expressed concern at the lack of adequate social housing for disadvantaged groups, including persons with disabilities and refugees, and at the insufficient level of education of Roma children. It also encouraged the government to adopt domestic violence legislation.

In April, the president of the Parliamentary Assembly of the Council of Europe called the recent death penalty execution in Belarus “barbaric” and expressed regret that little progress has been made to abolish the death penalty.

The EU reaffirmed that developing bilateral relations was conditional on Belarus’ progress towards respect for democracy, the rule of law, and human rights. In January 2013, the EU and Belarus launched negotiations on a visa facilitation and a readmission agreement.

The EU also extended existing sanctions for another year and expanded the list of persons subject to travel bans and asset freezes to 232 persons and 25 entities.