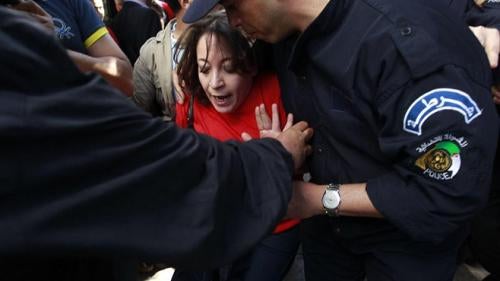 2014 saw no overall improvement in human rights conditions in Algeria despite promises tha the government has made since 2011 to introduce reforms. Authorities curtailed free speech and the rights to freedom of association, assembly, and peaceful protest, and arrested and prosecuted political and trade union activists.

Abdelaziz Bouteflika, president since 1999, was re-elected for the fourth time on April 17, 2014, despite his reported ill-health. Several opposition parties boycotted the election and called instead for democratic reforms and genuinely pluralistic elections.

The government authorized Human Rights Watch to make an official visit, in October 2014, to the country for the first time since 2005 and to hold a press conference on the human rights situation in the Tindouf Refugee camps. However, it continued to block the legal registration of Algerian human rights nongovernmental organizations (NGOs) and maintained its  non-cooperation with United Nations human rights experts and mechanisms.

Authorities continued their policy of pre-emptively suppressing peaceful protests by rounding up and arresting protest organizers in advance and then using the police to block access to demonstration venues. Those arrested and prosecuted on charges of gathering illegally included human rights activists and trade union leaders.

In April, authorities forcibly dispersed protesters opposed to President Abdelaziz Bouteflika’s re-election, and arrested and detained hundreds, including many supporters of the Barakat (“Enough”) movement. Police held those they arrested for hours in police stations before releasing some and prosecuting others. Those charged included Mohand Kadi, a youth activist, and Moez Bennecir, a Tunisian resident in Algeria. On May 18, a court convicted both men of participating in an “unlawful non-armed gathering harming public order,” under articles 97 and 98 of the penal code, and handed down suspended six month prison sentences.

In another case, on June 18, the First Instance Court in Laghouat imposed prison sentences ranging from six months to two years on 26 defendants after convicting them on charges that included “armed gathering” and violence against the police based on police testimonies that did not incriminate the defendants individually. The 26 included 17 local human rights activists whom the court convicted in absentia. They surrendered to the authorities and received a new trial, at which they were acquitted.

Authorities continued to frustrate efforts by human rights and other organizations to obtain official registration in compliance with Law 12-06 of 2012. This requires all associations, including those previously registered, to obtain a registration receipt from the Ministry of Interior before they can operate legally. The law also empowers the ministry to refuse to register an association whose activities it deems are contrary to Algeria’s “fundamental principles (constantes nationales) and values, public order, public morals and the applicable laws and regulations.”

These vague criteria give the authorities broad leeway to deny registration, without which organizations cannot lawfully hold public meetings or accept funds from abroad. Authorities also curtailed activities of some organizations that had obtained registration prior to the 2012 law by administrative means, such as by withholding official receipts for which they had applied and declining to make public venues available for them to hold annual general meetings that they are required by law to hold.

The government continued to prevent or disrupt efforts by workers to form independent unions, and to clamp down on peaceful protests and strikes. Authorities used administrative chicanery to withhold legal status from independent unions that seek to operate outside the General Union of Algerian Workers (Union générale des travailleurs algériens, UGTA), the national trade union federation that many consider too close to the government.

Under the law, workers are entitled to form trade unions simply by providing authorities with written notification, after which the Ministry of Interior should issue them with a receipt confirming the union’s registration. In many cases, however, the ministry either failed to issue a receipt, leaving the union unable to prove its registration, or requested additional information from applicants or instructed unions to modify their statutes before it would issue them a registration receipt. In some cases, the ministry failed to issue a receipt even after unions complied with its instructions. Without a receipt, a union cannot legally represent workers.

Organizers and workers in autonomous unions face arbitrary arrest and prosecution and other forms of harassment, such as dismissal from public service employment, for peacefully pursuing their trade union activities and demonstrating in support of better labor rights. On April 16, 2014, for example, the Appeals Court of Ouargla, imposed a suspended prison sentence of one year on union activist Houari Djelouli and fined him for distributing  “leaflets likely to undermine the national interest.” Police arrested Djelouli on April 8, 2013, in Ouargla city center as he prepared to distribute leaflets for the CNDDC union calling for a peaceful sit-in protest outside the wilaya (provincial headquarters) of Ouargla in support of the right to work.

Despite the adoption in 2012 of a new law on information that removed imprisonment as a penalty for speech offences, such as defaming or showing “contempt” to the president, state institutions, or the courts, authorities continued to prosecute and imprison peaceful critics using provisions of the Code of Criminal Procedures.

On September 1, the Court of Appeal of Ghardaïa in southern Algeria confirmed a two-year prison sentence and fine that a First Instance Tribunal had imposed in June on Youssef Ouled Dada after convicting him on charges of “insulting state institutions” and “publishing material that threatens public interest,” under articles 146 and 96 of the criminal code. The charges arose after Dada posted a video on his Facebook page that allegedly showed police officers robbing a store in El Guerrara, 115 kilometers northeast of Ghardaïa, during violent unrest in the town in November 2013.

The Law on Peace and National Reconciliation, adopted in 2006, continued to afford legal immunity to perpetrators of torture, enforced disappearances, unlawful killings, and other serious rights abuses during the internal armed conflict of the 1990s. The law also criminalizes any expression that authorities believe denigrates state institutions or security forces for their conduct during that conflict. However, to Human Rights Watch’s knowledge, there have been no prosecutions based on this law to date. Despite this and continued official harassment, associations representing the rights of the disappeared continued to call for truth and justice.

Algeria increased its security cooperation and joint military operations with Tunisia, following several attacks by armed militants on the Tunisian army and National Guard along the border with Algeria. Several high level representatives of western countries who visited Algeria, such as the French defense minister and US secretary of state, said their governments wished to strengthen security cooperation with Algeria to fight terrorism in the region.

On September 24, fighters who, according to news reports, claimed allegiance to the extremist group Islamic State, also known as ISIS, beheaded a French citizen in Algeria and released a video showing the killing. They kidnapped him after ISIS called on its supporters around the world to retaliate against the participation of French armed forces in military airstrikes in Iraq.

The Polisario Front has governed camps in southwest Algeria since the late 1970s for refugees who fled Western Sahara after Morocco invaded it. Critics of the Polisario were able to hold small, sporadic public demonstrations in 2014. None were imprisoned for their political views, to Human Rights Watch’s knowledge, but at least a few faced  harassment for openly criticizing the Polisario.

Refugees were largely free to leave the camps for Mauritania or to return permanently or temporarily to Moroccan-controlled Western Sahara. A Sahrawi woman, Mahdjouba Mohamed Hamdidaf, who had emigrated to Spain and was visiting her family in the refugee camps was forcibly confined by her family for more than two months after she sought to depart as planned in August. The Polisario Front did little to end herconfinement and protect her freedom of movement until it came under strong international pressure. At time of writing, there were reportedly other cases of Sahrawi women with legal residency in Europe whose families have forcibly confined them while visiting the camps.

The government of Algeria did not, to Human Rights Watch’s knowledge, explicitly recognize its responsibility for safeguarding the human rights of Sahrawis living in Polisario-run camps on Algerian soil.

In the framework of its European Neighborhood Policy (ENP), the European Union engaged in negotiations with Algeria on an action plan. ENP action plans are supposed to demonstrate partner countries’ commitment to, among other things, democracy, human rights, rule of law, and good governance.

The government of Algeria has not granted access to United Nations human rights mechanisms since 2011. Pending requests for access include the special rapporteurs on torture and on freedom of peaceful assembly and of association, and the UN Working Groups on Enforced or Involuntary Disappearances and on Arbitrary Detention.