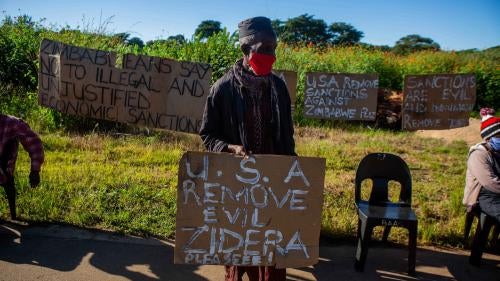 The administration of President Emmerson Mnangagwa failed to take meaningful steps to uphold human rights and ensure justice for serious abuses primarily committed by security forces in 2021. There has been no accountability for abuses by security forces, including the August 2018 post-election violence, and killings and rape during the January 2019 protests. Abductions, torture, arbitrary arrests, and other abuses against opposition politicians and activists have not been meaningfully investigated. The government has yet to establish an independent complaint system—as provided for in Zimbabwe’s Constitution—to receive and investigate public complaints against the security services. Other human rights concerns include a severe water and sanitation crisis, including during the Covid-19 pandemic, forced evictions, and child marriages.

The United States, United Kingdom, and European Union all renewed targeted sanctions against Zimbabwe for serious human rights abuses by security forces, corruption, and failure to ensure justice for past abuses.

Restrictive legislation, section 73 of the Criminal Law (Codification and Reform) Act, 2004, which punishes consensual same-sex conduct between men with up to one year in prison or a fine or both, contributes to stigma and discrimination against lesbian, gay, bisexual, and transgender (LGBT) people.

During 2021, authorities did not take concrete steps to ensure justice and accountability for serious abuses, most of which were committed by the security forces. President Mnangagwa appointed the Motlanthe Commission of Inquiry to investigate the August 2018 post-election violence, which found that six people had died and 35 others were injured because of actions by state security forces. Yet, three years later, the authorities have not implemented the commission’s recommendations, including to hold to account members of the security forces responsible for abuses and for compensating the families of those killed or who lost property.

There was no attempt to investigate and prosecute other serious violations that the state security forces have committed: including violent attacks, abductions, torture, and other abuses against members of the political opposition and civil society activists. Human Rights Watch investigations found that security forces used excessive and lethal force to crush nationwide protests in January 2019. Local groups reported that security forces fired live ammunition that killed 17 people, and uniformed soldiers raped at least 17 women during and after these protests. No security personnel have been arrested or prosecuted.

Unresolved cases in which there has been no accountability include the abduction and torture of rural teachers' union president Obert Masaraure, comedian Samantha Kureya (known as “Gonyeti”), activist Tatenda Mombeyarara, and students Tawanda Muchehiwa and Takudzwa Ngadziore.

In May 2020, three Movement for Democratic Change (MDC) Alliance politicians, Cecilia Chimbiri, Netsai Marova, and member of parliament Joanna Mamombe, were abducted from police custody by suspected state agents for taking part in a protest in Harare. They were assaulted and sexually abused by their abductors, then dumped in Bindura, 80 kilometers from Harare. While receiving treatment for their injuries, the trio were rearrested at the hospital and charged with making false reports about their abduction. At time of writing their trial was ongoing.

Right to Water and Sanitation

During 2021, hundreds of thousands of residents of Zimbabwe’s capital, Harare, including nearby municipalities of Chitungwiza and Epworth, continued to face a potable water crisis three years after a deadly cholera outbreak. The authorities in central and Harare city have failed to ensure clean water. Several factors have contributed to the city’s severe water problems, including economic decay; perennial droughts affecting Lake Chivero, which is dammed to supply Harare with water; the lack of maintenance of the old water infrastructure; the inability to procure the necessary chemicals to treat water sources; political struggles between the central government under the ruling party and the opposition-controlled city council; and corruption.

The water crisis has affected Harare residents’ rights to water and sanitation as well as other related rights, including the rights to life, food, and health. Many common water sources, namely shallow wells, taps, and boreholes—deep, narrow wells—are often contaminated. However, despite the known risk of contaminated water, there is no specific official information on which water sources are safe, leaving residents to take their chances.

Zimbabwe’s long-standing severe water and sanitation crisis has been worsened by the Covid-19 pandemic which increased demand for access to clean water for hygiene and the government’s imposition, since March 30, 2020, of a nationwide lockdown that continues to be in force at the time of writing. The provision of safe water is an important measure to combat the spread of the virus that causes Covid-19.

On February 26, 2021, the local government, urban and rural development minister, July Moyo, published a legal notice ordering thousands of people to either acquire fresh rights of use or occupation or immediately vacate approximately 12,940 hectares of Chilonga communal land in Chiredzi, southeastern Zimbabwe. The legal notice, Statutory Instrument 50 of 2021, which the government later repealed and replaced, said the land was being set aside for lucerne grass production—farming grass for stockfeed. Chilonga community members went to court, which ordered the arbitrary evictions to be stopped until the government provides alternative land, compensation, and shelter.

During 2021, the authorities failed to fully enforce the ban on child marriages, exposing millions of underage girls to abuse. A landmark 2016 Constitutional Court decision declared child marriages unconstitutional and set 18 as the minimum marriage age for girls and boys, without exceptions.

A 14-year-old girl who had been forced into marriage died during childbirth in July, at a Marange Apostolic church, in Manicaland province, highlighting the high price girls pay for the practice of child marriage, which remains rampant in Zimbabwe. The practice is prevalent among Indigenous apostolic churches, an evangelical group that mixes Christian religious beliefs with traditional cultures and has millions of followers across the country.

In February, the UK’s Office of Financial Sanctions Implementation (OFSI) placed four top Zimbabwe security officials—Owen Ncube, Anselem Sanyatwe, Godwin Matanga, and Isaac Moyo—on targeted sanctions for being responsible for serious human rights violations. In July, the UK imposed sanctions on President Mnangagwa’s economic advisor, Kudakwashe Regimond Tagwirei, “for profiting from misappropriation of property when his company, Sakunda Holdings, redeemed Government of Zimbabwe Treasury Bills at up to ten times their official value. His actions accelerated the deflation of Zimbabwe’s currency, increasing the price of essentials, such as food, for Zimbabwean citizens.” Tagwirei was placed under US sanctions in 2020.

The European Union on February 19 renewed its arms embargo and targeted asset freeze against Zimbabwe Defense Industries, a state-owned military company. The EU said the restrictive measures were in light of the continued need to investigate the role of security force actors in human rights abuses as well as concern about “a proliferation of arrests and prosecutions of journalists, opposition actors and individuals expressing dissenting views.” It said that these measures would not affect the Zimbabwean economy, foreign direct investment, or trade, but “to encourage a demonstrable, genuine and long-term commitment by the Zimbabwean authorities to respect and uphold human rights and the rule of law.”

In March, US President Joe Biden extended for another year the targeted sanctions against designated Zimbabwean government officials and other private individuals. Biden told Congress that “President Emmerson Mnangagwa has not made the necessary political and economic reforms that would warrant terminating the existing targeted sanctions program.”