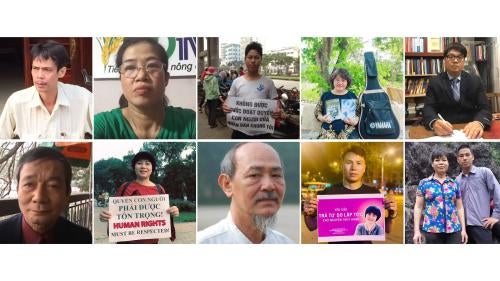 Prohibitions continued in 2021 on the formation or operation of independent unions and any other organizations or groups considered a threat to the Communist Party’s monopoly on power. Authorities blocked access to sensitive political websites and social media pages, and pressured social media and telecommunications companies to remove or restrict content critical of the government or the ruling party.

In January 2021, the CPV held its 13th congress, during which it selected the country’s new politburo. Of the 18 members, at least seven, including Vietnam’s new prime minister, Pham Minh Chinh, have affiliation with the Ministry of Public Security. In May, Vietnam held a tightly controlled and scripted national election in which all candidates had to be approved by the CPV. Several dozen independent candidates were intimidated and disqualified, and two were arrested.

Vietnam boasted successes in 2020 and the first five months of 2021 in combating Covid-19. But as the Delta variant swept through the region, by early November there were more than 939,000 positive cases and more than 22,000 deaths. Law enforcement violated rights by using excessive force to make people undergo compulsory Covid-19 tests and quarantine, and to enforce compliance with the lockdown.

Authorities in Ho Chi Minh City, Hanoi, and other places put up blockades and locked gates to restrict movement during the lockdown without measures in place to ensure people could evacuate in case of emergency, access urgent medical care, or procure food and other necessities. Authorities provided inadequate pandemic relief. Many people, especially migrant and freelance workers, relied heavily on help from community networks, both for food and medical services. Hundreds of thousand people fled Ho Chi Minh City for their hometowns as soon as the strict lockdown was eased.

Dissidents and rights activists face routine harassment, intimidation, arbitrary arrest and imprisonment. In 2021, the courts convicted at least 32 people for posting critical opinions about the government and sentenced them to many years in prison. Police arrested at least 26 other people on fabricated political charges.

The government regularly uses penal code Article 117, criminalizing the act of “making, storing, disseminating, or propagandizing information, materials and products that aim to oppose the State,” against civil society activists. In January, a Ho Chi Minh City court put prominent members of the Independent Journalists Association on trial. Pham Chi Dung, Nguyen Tuong Thuy, and Le Huu Minh Tuan were convicted and sentenced to between 11 and 15 years in prison.

In 2021, the courts convicted and sentenced at least 11 people including Le Thi Binh, sister of former political prisoner Le Minh The, for “abusing the rights to freedom and democracy to infringe upon the interests of the state” under Article 331 of the penal code. Police also arrested at least 12 other people on the same charge, including members of Bao Sach (Clean Newspaper), a group of independent journalists fighting against corruption and rights abuses. In October, a court in Can Tho province sentenced members of Bao Sach to between two and four-and-a half-years in prison.

In July 2021, state media in Vietnam reported that the Ministry of Information and Communications praised Facebook and Google for responding to requests from the Vietnamese government. They said that during the first six months of 2021, Facebook removed 702 posts and accounts, and Google removed 2,544 videos and channels on YouTube that “distorted leaders of the Party, the State, and the 13th Party Congress.” The government also claimed Facebook responded affirmatively to 97 percent, and Google to 98 percent, of the government’s requests, and usually acted within 24 hours.

Reuters reported that Facebook also removed a number of pro-government groups and accounts for “coordinating attempts to mass report content.”

Facebook did not comment on the statement from the Vietnam government, but in a communication to Human Rights Watch in November 2021, acknowledged that “we do restrict some content in Vietnam to help ensure our services remain available for millions of people who rely on them every day.” Google did not respond to Human Rights Watch’s request for comment at time of writing.

During the year, authorities also imposed monetary fines on hundreds of people for spreading what the government claimed was misinformation relating to Covid-19 and the government’s handling of the pandemic. Several people were arrested for posting allegedly distorted, fabricated, or fake news.

Freedom of Association, Assembly, and Movement

The Vietnamese government routinely violates the right to freedom of movement by subjecting dissidents, environmental activists, human rights defenders, and others to arbitrary periods of house arrest, intimidation, and even kidnapping to stop them from attending protests, criminal trials, meetings with diplomats, and other events. In January, a number of dissidents and activists including Huynh Ngoc Chenh, Nguyen Thuy Hanh, Dinh Duc Long, Truong Thi Ha, Tran Bang, Mac Van Trang, and Nguyen Thi Kim Chi reported that they were placed under house arrest during the Communist Party Congress. In August, during the visit of United States Vice President Kamala Harris to Hanoi, security agents also put Huynh Ngoc Chenh under house arrest.

Authorities blocked critics from domestic and international travel, including by stopping them at airports and denying passports or other documents that allow them to leave or enter the country.

The government restricts religious practice through legislation, registration requirements, and surveillance. Religious groups must get approval from, and register with, the government and operate under government-controlled management boards. While authorities allow government-affiliated churches and pagodas to hold worship services, they ban religious activities that they arbitrarily deem to be contrary to the “national interest,” “public order,” or “national unity,” including many ordinary types of religious functions.

In August, a court in Gia Lai put Rah Lan Rah, Siu Chon, and Ro Mah Them on trial for being associated with an independent religious group disapproved by the government, sentencing them to between five and six years in prison.

Rights of Women and Children

Violence against children, including sexual abuse, is pervasive in Vietnam, including at home and in schools. Numerous media reports have described cases of guardians, teachers, or government caregivers engaging in sexual abuse, beating children, or hitting them with sticks. During the first six months of 2021, amid the pandemic lockdown, there were reports of increasing physical and sexual abuses of children in Vietnam.

The pandemic was also linked, including in 2021, to rising incidence of violence against women, while organizations assisting survivors of gender-based violence struggled to adapt and continue their services during the pandemic.

In recent years, the Vietnamese government has taken modest strides to recognize the rights of lesbian, gay, bisexual, and transgender (LGBT) people, including by removing prohibitions on same-sex relationships and legal gender change. However, the government has not added explicit protections for LGBT people. Vietnamese LGBT youth face widespread discrimination and violence at home and at school. Pervasive myths about sexual orientation and gender identity, including the false belief that same-sex attraction is a diagnosable and curable mental health condition, is common among Vietnamese school officials and the population at large.

Maritime disputes continue to complicate the relationship with China, which carried out military drills on the disputed seas in 2021, while Vietnam raised repeated protests. However, during high-ranking visits, the two communist parties formally applauded their friendship and solidarity.

The relationship between the United States and Vietnam stayed strong. Vietnam received Vice President Kamala Harris in August. During her visit, Harris mentioned human rights in passing, but did not meet with any members of the Vietnamese civil society. Hanoi released two Vietnamese-American prisoners convicted for being affiliated with political groups outlawed by the Vietnamese government and deported them to the US before Harris’ arrival.

Amid intensifying repression in Vietnam, the EU Commission is yet to provide any display of the stronger leverage to address human rights abuses with Hanoi ostensibly provided by the EU-Vietnam Free Trade Agreement (EVFTA), which entered into force in August 2020. In January, the EU’s diplomatic branch and the European Parliament deplored the harsh sentencing of journalist Pham Chi Dung, who has been jailed since 2019 for his outreach to the European Parliament in the context of the EVFTA ratification process, and of his colleagues Nguyen Tuong Thuy and Le Huu Minh Tuan. In July, the EU did not react publicly on the arrest by Vietnamese authorities of journalist Mai Phan Loi and lawyer Dang Dinh Bach on trumped-up charges as they were working to promote the participation of independent civil society in the Domestic Advisory Group (DAG) as stipulated in the EVFTA.

Australia’s bilateral relationship with Vietnam continues to grow even as an Australian citizen, Chau Van Kham, remains in prison in Vietnam for his alleged involvement in an overseas political party declared unlawful by the Vietnamese government.

Japan remains the most important bilateral donor to Vietnam. As in previous years, Japan has declined to use its economic leverage to publicly urge Vietnam to improve its human rights record.