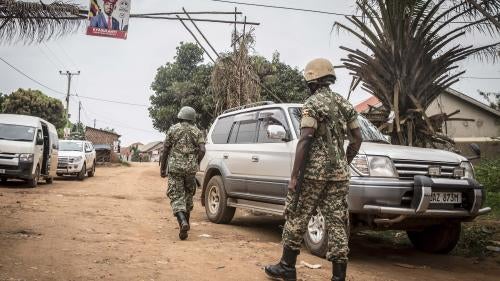 There was a marked deterioration in Uganda’s human rights environment over the past year. President Yoweri Museveni was re-elected in January 2021 in a general election marred by widespread abuses. Security forces arbitrarily arrested and beat opposition supporters and journalists, killed protesters, and disrupted opposition rallies.

Shortly before the elections, the government shut down the internet for five days, and restricted access to social media sites including Twitter and YouTube for a month. The authorities indefinitely blocked access to Facebook after the network announced it had taken down a network of accounts and pages linked to the government.

The authorities in Uganda restricted right to freedom of movement and assembly, in particular for political opposition leaders, and violated rights to freedoms of association and expression, as security forces beat and at times arbitrarily detained journalists and opposition members.

Two days before the January 14, 2021, elections, the Uganda Communications Commission ordered internet service providers to block social media access. The next day, the government shut down internet access across the country for five days. The authorities restored partial access to social media websites, excluding Facebook, in February. During election campaigns, the authorities restricted media coverage of opposition party candidates, in some instances beating and shooting at journalists with rubber bullets.

In February 2021, military police beat at least 10 journalists covering opposition presidential candidate, Robert Kyagulanyi, as he delivered a petition to the United Nations Office of the High Commissioner for Human Rights in Kampala over the abuses against his supporters. The next day, the army announced that a military court had sentenced seven members of the military police to two months detention in a military facility but provided no details on its investigations or the military trial.

Security forces conducted a spate of abductions and arrests of opposition supporters, government critics, and other people for allegedly participating in protests over the November 18, 2020 arrest of Kyagulanyi in Luuka, Eastern Uganda. On March 4, 2021, Internal Affairs Minister Jeje Odongo presented a list to parliament of 177 people in military detention who had been arrested between November 18, 2020, and February 8, 2021, allegedly for participating in the protests as well as for being in “possession of military stores,” and “meetings planning post-election violence.” On March 8, in a public letter to the media, President Yoweri Museveni said that 50 people were being held by the Special Forces Command, a unit of the Ugandan army, for “treasonable acts of elements of the opposition.”

In May 2021, police detained 24-year-old law student Michael Muhima for a tweet parodying the police spokesperson, charged him with “offensive communication,” and denied him access to lawyers or family for five days before he was released on bail.

The government in June cancelled a social media tax requiring users of WhatsApp, Twitter, and Facebook, among other sites, to pay a daily fee of 200 Ugandan Shillings (US$0.05) that had been in force since 2018, and replaced it with a general 12 per cent tax on the purchase of internet data, further restricting access to many Ugandans.

In August 2021, following a petition from women's rights organizations, lawyers and activists, the Constitutional Court annulled the 2014 Anti-Pornography Act. The Act criminalized the sharing of nude photos and in some instances, was used to arrest women whose intimate photos were leaked online. The Court also disbanded the nine-member Pornography Control Committee, set up in 2017 to enforce the law.

In the leadup to Uganda’s January 2021 elections, security forces beat and arrested scores of opposition supporters and journalists, killed dozens, and disrupted opposition rallies. Presidential candidates, Patrick Amuriat, of the Forum for Democratic Change and, Robert Kyagulanyi of the National Unity Platform were among those arrested.

On January 8, police charged 49 National Unity Platform supporters with alleged possession of ammunition belonging to the Ugandan army. On January 9, security officials surrounded Kyagulanyi’s home and prevented people from entering or exiting for days, including the United States Ambassador to Uganda, Natalie E. Brown. Media reported that soldiers beat Francis Zaake, an opposition member of parliament, when he attempted to visit Kyagulanyi. On January 18, security forces blocked access to Kyagulanyi’s party’s head office in Kampala, allegedly to “counter any plans to violent demonstrations and mass riots.”

On February 17, 2021, the government indefinitely suspended the Democratic Governance Facility (DGF) in Uganda, a European Union donor fund for nongovernmental groups, saying the government lacked oversight over the fund.

Ugandan authorities on August 20, 2021, announced, without prior notification, that they had halted the activities of 54 civil society groups, including human rights and election monitoring organizations. The National Bureau for Non-governmental Organizations, a state regulatory body, only started notifying the groups hours or even days after the announcement.

Following years of forced evictions carried out by security forces in Apaa, Northern Uganda, thousands of eligible voters were unable to participate in the 2021 elections because Uganda’s Electoral Commission updated the national voters’ register, but excluded Apaa.

On August 12, President Museveni met with nine leaders from Acholi sub-region to discuss Apaa. During the meeting the leaders agreed to establish a commission of inquiry into the evictions, the land dispute, how long people have lived in the area, and review the process of the government’s 2002 decision to turn Apaa into forestry and wildlife reserves. In the same meeting, Museveni directed the environment minister to evict people from Zoka forest, in the north of Apaa, claiming it is a forestry reserve.

On February 4, 2021, International Criminal Court (ICC) judges convicted Dominic Ongwen, a former leader of the Lord’s Resistance Army, on 61 counts of war crimes and crimes against humanity. The crimes include attacks on the civilian population, murder, torture, persecution, forced marriage, forced pregnancy, sexual slavery, enslavement, rape, pillage, destruction of property, and recruitment and use of children under the age of 15 to participate in the hostilities. On May 6, ICC judges imposed a 25-year-sentence on Ongwen, the first conviction and sentencing of an LRA leader.

Jospeh Kony, the LRA’s founding leader and the only living remaining ICC suspect of LRA crimes, remains a fugitive.

Wider accountability for crimes committed during the 25-year conflict in northern Uganda remains limited. Abuses by the Ugandan armed forces during the conflict, including torture, rape, arbitrary detention, unlawful killings, and forced displacement of citizens, have rarely been prosecuted. The Ugandan army has said that soldiers who committed these abuses have been prosecuted and convicted but has not provided details of such cases.

Uganda’s International Crimes Division, which was established in 2008, has pursued only one case involving crimes committed in northern Uganda, against LRA commander Thomas Kwoyelo. The trial has proceeded in fits and starts, suffering many delays. Some former LRA fighters, including senior commanders, were integrated into the Ugandan military without investigation into crimes they may have committed in the LRA.

In December 2020, the ICC prosecutor’s office concluded an assessment of a 2016 police and military operation in western Uganda in which about 150 people were killed. The prosecutor’s office found Ugandan security forces committed murder and used indiscriminate and disproportionate force but was unable to conclude that the acts took place as part of a policy, a necessary element for the ICC’s jurisdiction. There has been no domestic accountability for the crimes.

To stop the spread of Covid-19, President Museveni ordered the closure of all schools on March 18, 2020, affecting more than 15 million students. Schools were partially open for university, secondary and primary candidate classes in 2021, but largely remained closed since the pandemic’s start in 2020. On September 22, President Museveni announced the reopening of post-secondary institutions in November 2021, and other schools at the beginning of January 2022.

Uganda adopted universal primary education in 1997 and universal secondary education in 2007, abolishing tuition fees and prohibiting schools from introducing other costs that could create barriers for students from low-income households and those living in poverty. In practice, many public schools still levy fees. Prohibitive school fees and the under-resourcing of public primary and secondary schools are significant barriers for many children.

Child labor rates rose in 2020 as the economic impact of the Covid-19 pandemic, together with school closures and inadequate government assistance, pushed children into exploitative and dangerous work. Working children told Human Rights Watch that in addition to helping their family during the Covid-19 pandemic, they also hoped to save money to cover school fees once schools re-opened.