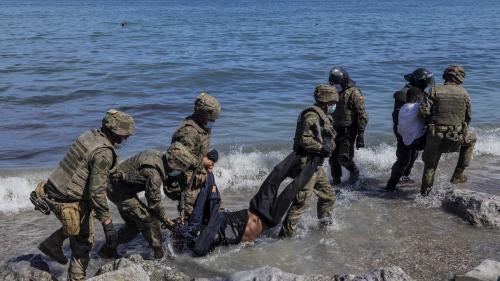 Spain pushed migrants and asylum seekers back at its borders while hundreds died at sea attempting to reach the Canary Islands. As poverty increased with the Covid-19 pandemic, people faced obstacles applying for a new social security support scheme. The government announced legislative reforms to counter gender-based violence and allow for gender self-recognition for trans people. The government granted partial pardons for nine politicians and activists convicted for their actions during the disputed 2017 referendum on Catalan independence.

The World Health Organization estimated that a further 32,902 people had died from Covid-19 by November 4, bringing the total death toll to 87,462. A nationwide vaccination program had ensured that 88.7 percent of the population had received a full dose of Covid-19 vaccine by November 4.

According to the UN refugee agency, UNHCR, by October 31, at least 33,706 people had arrived irregularly by sea to Spain’s mainland, the Canary Islands, in the Atlantic Ocean, and Ceuta and Melilla, the country’s enclaves in north Africa, while 1,068 arrived by land. These figures did not include data regarding the arrivals from May 17 onwards into Ceuta (see below). As of mid-September, an estimated 1,025 people had died or gone missing at sea during the year en route to Spain, most of them in the Atlantic, according to the International Organization for Migration.

In April, four UN special rapporteurs wrote to the Spanish government about abusive pushbacks from its enclaves to Morocco, following fresh allegations of ill-treatment by Spanish border guards in January. Nonetheless, there were reports of summary returns throughout the year, and the governing coalition did not endorse reforming existing law allowing for this practice.

Between May 17 and 19, an estimated 10,000 people entered Ceuta, swimming or wading across a beach frontier, after Moroccan authorities reportedly stopped enforcing border controls following a diplomatic dispute with Spain. The group, of whom between 1,500 and 3,000 were estimated to be children, faced summary returns and pushbacks upon arrival as well as mass “voluntary” returns within days, giving rise to concerns that Spanish authorities blocked access to asylum, returned third country nationals to Morocco, and failed to determine children’s best interests before sending them back. Ceuta’s already overcrowded reception facilities were overwhelmed by those whom the Spanish authorities did not immediately expel, with local authorities setting up makeshift shelters, including for the more than 700 children who remained. Thousands of other migrants were left sleeping rough in substandard conditions.

On August 13, the Spanish government began returning some of the children to Morocco under a readmission agreement; the national human rights ombudsperson immediately told the government to stop what it called an unlawful practice. Media documented that more children were returned despite the ombudsperson’s ruling, during the following two days, until a local court ordered a stop to further returns on August 16.

In September, Spanish armed forces stationed on another military outpost in North Africa, Peñón de Vélez de la Gomera, summarily returned approximately 125 people, including eight children, who had walked across a small strip of sand connecting it to Moroccan territory.

The UN Committee on the Rights of the Child set out concerns in two cases, made public in February and August, about the inappropriateness of processes used by Spanish authorities to determine the age of unaccompanied migrant and asylum-seeking children and young people.

In June, the national human rights ombudsperson called on the government to improve access to residence permits for young people who had been given temporary authorization to work in the agricultural sector during the pandemic. In October, the government approved a decree tabled by the Ministry of Inclusion, Social Security and Migration setting out a clear legal pathway for approximately 15,000 young migrants to obtain residence permits after turning 18.

Spanish forces airlifted 2,206 Afghans to Spain in August following the Taliban takeover in Afghanistan and set up a reception hub through which approximately 3,000 more evacuees passed to other EU and NATO member states. Despite these efforts, at least a few dozen Afghan interpreters and other staff who had assisted Spanish forces remained stranded after formal evacuation efforts ended.

A leading anti-poverty NGO calculated that 620,000 people joined the 12.5 million people already “at risk of poverty or social exclusion” in the country, with the first annual increase after five years of steady decline, and found that by the end of 2020, 4.5 million people in Spain were living in extreme poverty (defined as below 40 per cent of median national income, or less than €6,417.30 (US$7,423) per household per year).

Although the country’s Minimum Vital Income scheme (IMV), established in May 2020 to provide financial support to people living in poverty helped mitigate the increase, people making applications faced bureaucratic delays and exclusionary criteria. Some welfare advisers estimated in February that two out of three applications for IMV support were rejected. Spain’s main food bank network estimated in February that it was providing up to 60 percent more aid than in 2020.

Despite a government decree allowing tenants with documented “economic vulnerability” to apply for temporary relief from evictions and utility cut-offs, official data showed that 22,532 evictions were carried out during the first eight months of the year, the majority for non-payment of rent.

In two separate cases communicated in March, the UN Committee on Economic, Social and Cultural Rights found that Spain had violated the housing rights of families living in poverty, with a child or children with disabilities, and facing eviction.

In July, a Barcelona court acquitted three housing rights activists of charges related to protests against an eviction in 2018. The prosecution had sought three-year jail sentences, which were widely criticized as a punitive response to lawful protest, including in a joint letter by four UN special rapporteurs.

At time of writing, an estimated 4,000 people, including more than 1,500 children, living in parts of Cañada Real, an informal settlement in greater Madrid, had been without electricity after authorities and energy providers cut off the supply in October 2020, citing illegal use. They faced a second successive winter without heat or electricity.

Draft legislation introduced by the government in July providing a clearer definition of consent and a right to reparation for victims of gender-based violence, among other measures, was before parliament at time of writing.

In September, the Supreme Court issued important guidance, with 27 clear rules for courts, on domestic abuse and threatening behavior, based on a case that came before it from Galicia.

According to official statistics, 6 of Spain’s 19 autonomous communities and cities had no public health facilities providing abortion. Serious concerns remained about conscientious objection by health workers acting as an obstacle to women who needed abortion care.

By April, Spain had managed to ensure greater access to in-person education during the Covid-19 pandemic than any comparable OECD country.

In September, local authorities in Melilla allowed some 160 children from families without regular migration status, or unable to provide documentary evidence of residence, to enroll for school. The step came following years of campaigning by local children’s rights activists about the difficulties children from families with Moroccan nationality or of Moroccan origin faced in enrolling children for school, repeated recommendations from the national human rights ombudsperson, and a ruling by the UN Committee on the Rights of the Child in June.

In June, parliament adopted a legal capacity reform law, providing for mechanisms to support people with disabilities to make decisions for themselves, such as whether to marry or to sign a contract. However, the law did not completely abolish substitute decision making and courts can continue to appoint another person to make decisions on behalf of a person with a disability.

In February, European Commission Against Racism and Intolerance (ECRI), the Council of Europe’s anti-racism monitoring body, called on the Spanish government to take concrete steps to end the segregation of Roma children in schools.

In March, the Ministry for Equality published Spain’s first official report on the experience of African and Afro-descendant people, which showed strong evidence of structural discrimination against Black people in the country.

In May, the lower house of parliament rejected a bill that would have allowed for legal gender recognition based on self-identification for transgender and non-binary people, including children. At the time of writing, the government was preparing a new draft law to address Spain’s current pathologizing gender recognition procedure and expand protections for lesbian, gay, bisexual and transgender (LGBT) people.

In June, the government granted conditional pardons to nine pro-independence Catalan politicians and activists jailed for their role in relation to the region’s disputed 2017 referendum.

The European Court of Human Rights ruled in unrelated cases, in March and June respectively, that Spain had violated the right to free expression of three activists. The first case involved two environmental activists in Aragon convicted of insulting a judge in a 2010 letter to a newspaper editor, and the second a Basque activist convicted of glorification of terrorism and incitement to hatred and violence during a 2008 speech.

In November, the Council of Europe’s Committee for the Prevention of Torture published a report documenting physical ill-treatment, including slaps, punches, and baton blows, and a systemic failure to document, report and investigate allegations of ill-treatment in police custody and prisons. The Committee also found that falaka, a torture method involving baton blows to the soles of the feet, continued to be used in prisons, and called on Spain to abolish the use of incommunicado detention.

The same month, media reports indicated that the governing coalition had reached an agreement to amend a problematic 2015 public security law, lifting or mitigating restrictions on freedom of expression and assembly and curtailing police powers relating to detention and the use of rubber bullets.