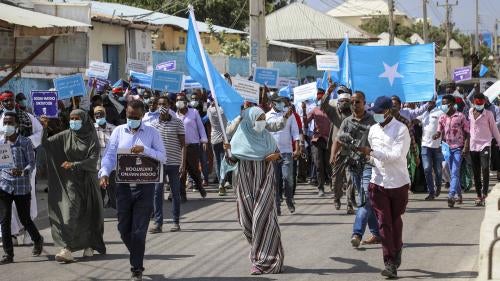 During a year that marked the 30th anniversary of the collapse of the Somali state, domestic and international attention was focused on plans for the delayed parliamentary and presidential electoral process. Political tensions stalled reform efforts key to advancing human rights in the country, while conflict-related abuses, insecurity, and humanitarian and health crises took a heavy toll on civilians.

All parties to the conflict in Somalia committed violations of international humanitarian law, some amounting to war crimes. The Islamist armed group Al-Shabab conducted indiscriminate and targeted attacks on civilians and forcibly recruited children. Inter-clan and intra-security force violence killed, injured, and displaced civilians, as did sporadic military operations against Al-Shabab by Somali government forces, troops from the African Union Mission in Somalia (AMISOM), and other foreign forces.

Federal and regional authorities continued to intimidate, attack, arbitrarily arrest, and at times prosecute journalists, including by using the country’s outdated penal code. Somalia continued to rely on military court proceedings that violated international fair trial standards; it did not hand over Al-Shabab cases from military to civilian courts.

Key legal and institutional reforms stagnated. The review of the country’s outdated penal code stopped; there was no movement on the passing of federal legislation on sexual offenses or on key child’s rights legislation. The government also failed to establish a national human rights commission; the appointment of commissioners has been pending since 2018.

Allegations that Somali soldiers were trained in Eritrea and deployed in Ethiopia’s Tigray conflict added to the political tensions. The disappearance of the former intelligence official, Ikran Tahlil Farah, reportedly missing since late June, led to a standoff between President Mohammed Abdullahi “Farmajo” and Prime Minister Mohamed Hussein Roble, including over the control of the country’s powerful national intelligence and security agency (NISA).

The United Nations Assistance Mission in Somalia (UNSOM) recorded at least 899 civilian casualties, including 441 killings, between late November 2020 and late July; a marked increase compared to the same reporting period the previous year. Most were killed during targeted and indiscriminate Al-Shabab attacks using improvised explosive devices (IEDs), suicide bombings, and shelling, as well as assassinations.

After the parliament extended the presidential term on April 25 by two years, armed confrontations between security forces linked to different political factions in various districts of Mogadishu, the capital, resulted in the displacement of between 60,000 and 100,000 people, according to the United Nations.

Federal and regional military courts continued to sentence people to death and carry out executions despite serious due process concerns. Puntland executed 21 men convicted by military courts of Al-Shabab membership and killings on June 27, in three separate locations.

Al-Shabab fighters killed dozens of individuals it accused of working or spying for the government and foreign forces, often after unfair trials.

The UN attributed six civilian casualties to AMISOM forces between late 2020 and late July. AMISOM established a board of inquiry into an August 10 incident involving Ugandan soldiers who were ambushed by Al-Shabab fighters around Golweyn, Lower Shabelle and responded by killing seven civilians. A Ugandan court martial found five soldiers responsible for the killings, sentencing two to death. Reports of civilian harm as a result of airstrikes in the Gedo region increased.

Despite federal and regional investigations into the May 2020 massacre of seven health workers and a pharmacist in the village of Gololey in Balcad District, the outcome of these investigations remains unknown.

The UN reported an increase in incidents of sexual and gender-based violence, including of girls, which often resulted in the victims being killed.

Key legal reforms stalled, notably the passing of progressive sexual violence legislation at the federal level. The Somali criminal code classifies sexual violence as an “offense against modesty and sexual honor” rather than a violation of bodily integrity; it also punishes same-sex relations. Article 4(1) of the Provisional Constitution (2012), places Sharia law above the constitution and it continues to be applied by courts in criminal cases. Consequently, the death penalty for consensual same-sex conduct could be enforced.

In Puntland, the first region to pass a sexual offenses law, the UN reported on government interference and blocking of investigations into sexual violence incidents.

Children continue to bear a heavy burden of ongoing insecurity, conflict, and lack of key reforms in the country. All Somali parties to the conflict committed serious abuses against children, including killings, maiming, recruitment and use of child soldiers, and attacks on schools.

The previous year, pending legal reforms sought to reduce the age of marriage, including a controversial draft law on sexual-intercourse related crimes—the status of which remained unknown—which would allow a child to marry at puberty regardless of their age.

When the Covid-19 pandemic started in early 2020, schools were closed or partially closed for 134 days, including several weeks in March and April 2021, affecting at least 1.2 million children.

Federal and regional authorities throughout Somalia repeatedly harassed, arbitrarily arrested, and attacked journalists. Moments of heightened tensions around the electoral process correlated with an uptick in incidents of harassment toward journalists.

The UN and Amnesty International reported an increase during the first quarter of the year in restrictions on journalist in Puntland. In March, the military appeals court in Puntland sentenced Kilwe Adan Farah, a journalist, to three years in prison under the outdated penal code for his coverage of anti-government protests. Earlier, a military court sentenced him to three months, despite the judge reportedly acknowledging a lack of evidence. The journalist received a presidential pardon.

Several journalists covering protests in Mogadishu were temporarily detained and harassed. On September 5, Bashiir Mohamud, producer at Goobjoog Media, was filmed being dragged through the streets by Somali police while he covered protests demanding justice for the killing of a former intelligence officer, Ikran Tahlil Farah. He was then held for a few hours at the Hodan police station.

Over 2.6 million Somalis are internally displaced, increasingly because of conflict. The UN said over 570,000 people were displaced between January and August 2021. Droughts, flooding, and desert locust swarm—increasing in intensity and frequency due to climate change—exacerbated communities’ existing vulnerabilities and contributed to displacement. The UN and Norwegian Refugee Council (NRC) reported that between January and August, droughts and floods displaced over 90,000 and 49,000 people respectively. Tens of thousands of internally displaced people were forcibly evicted, notably in Mogadishu.

Nearly 3.5 million people were expected to face acute food insecurity and need emergency food aid in the last quarter of the year.

Humanitarian agencies continued to face serious access challenges due to conflict, targeted attacks on aid workers, generalized violence, restrictions imposed by parties to the conflict, including arbitrary “taxation” and bureaucratic hurdles, and physical constraints due to extreme weather. Al-Shabab continued to impose blockades on  some government-controlled towns, notably the town of Hudur, and occasionally attacked civilians who broke them.

An Amnesty International report documented Somalia’s inadequate response to the Covid-19 pandemic, and highlighted the chronic underfunding of the country’s health system.

Somaliland held greatly delayed parliamentary and local elections on May 31, which led to opposition control over the parliament. Not a single woman was elected to parliament. In the run-up to the May elections, a local rights organization reported that seven opposition candidates and seven journalists were arbitrarily detained.

In early October, the Somaliland authorities forcibly displaced to Puntland an estimated 1,750 people, including women, children and older people, mainly Af May speakers originating from South West State in Somalia from the contested border town of Las Anod.

In January, following then-President Donald Trump’s orders, the US withdrew approximately 700 ground troops from Somalia. While US airstrikes significantly decreased, AFRICOM claimed carrying out 11 strikes in Somalia at time of writing, since the start of the year. AFRICOM acknowledged responsibility for injuring three civilians during a January 1, 2021 strike. To date AFRICOM has not provided compensation to any civilian victims or their families.

International and regional actors were by and large focused on political stalemates around the electoral process and security concerns, often at the detriment of continuing to push for key rights reforms. International partners, including the European Union, suspended their budgetary support to Somalia in response to the electoral stalemate. The suspension was still in place at time of writing.

During Somalia’s Universal Periodic Review in May, international donors pressed Somalia to introduce policies and legislation to tackle sexual violence and pass child rights legislation in line with the Convention on the Rights of the Child. Many international partners called for improved media freedoms, including a review of the new media law. EU member states also called for a moratorium on the death penalty. The US called for an end to military court trials of civilians.