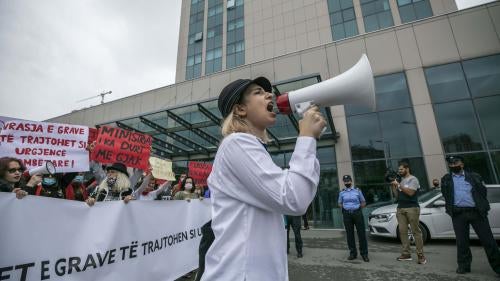 Journalists critical of authorities continued to face harassment, threats, violence, and intimidation. Most war crimes prosecutions involved low level perpetrators. Little progress was made to ensure people with disabilities can live independently in the community. Lesbian, gay, bisexual and transgender (LGBT) people continued to be subjected to attacks and threats with impunity.

Between January and late August, the Independent Journalists’ Association of Serbia (NUNS) registered 1 physical attack and 20 threats against journalists.

In April, Dasko Milinovic, a journalist and host of a satirical radio show, was attacked with tear gas by two men in Novi Sad on his way to work and suffered minor injuries as a result. Court proceedings against the assailants were pending at time of writing.

Journalist Vojislav Milovancevic, at Nova.rs news website, in January received threatening messages, including some death threats following the publication of his report on a rape allegedly by a member of clergy at the Orthodox Theological Faculty. Milovancevic reported the case to the Special Prosecutors’ Office for High Tech Crime in January and an investigation was pending at time of writing.

Smears against the independent Crime and Corruption Reporting Network (KRIK), a website, put its journalists at risk. In March, pro-government channel TV Pink alleged KRIK was linked to a criminal gang. Several pro-government tabloids echoed the allegation. Members of the SNS ruling party and other members of parliament publicly discredited KRIK, including accusations it failed to pay taxes and is a criminal association.

The retrial of the four defendants accused of the 1999 murder of prominent journalist and editor, Slavko Curuvija, which started in October 2020, was marred by several delays and was ongoing at time of writing.

Social media platform Twitter in August labelled the Twitter accounts of some leading Serbian media outlets as state-affiliated, on grounds that the state exercises editorial and financial control over them through direct or indirect political pressure.

Between January and August, the War Crimes Prosecutor Office launched 9 new investigations against 11 individuals and issued 3 indictments against a total of 4 individuals. An appeals court in Belgrade convicted one low-ranking official of war crimes. The first instance court in Belgrade handed down 7 convictions for war crimes in the same time period. As of August, 15 cases against 32 defendants were pending before Serbian courts.

The Appeals Court in Belgrade in July reduced the sentence of former Bosnian Serb Army soldier Dragomir Kezunovic from fourteen to five years for his role in the detention and killing of 28 civilians in Bosnia and Herzegovina (BiH) in June 1992. Kezunovic had been convicted and sentenced in absentia by the State Court in BiH before the case was taken over by the Serbian court.

Also in June, the High Court in Belgrade opened trial proceedings against Branko Basara, a former Bosnia Serb commander, for war crimes against some 200 civilians in the Sanski Most area in BiH in 1992, including killings and forced relocations.

In May, the High Court in Belgrade convicted and sentenced to nine years imprisonment former Bosnian Serb army soldier, Dalibor Krstovic, for raping a woman prisoner detained in an elementary school in BiH town of Kalinovik in August 1992.

The UN International Residual Mechanism for Criminal Tribunals in the Hague in June sentenced former Serbian State Security Chief Jovica Stanisic and his deputy, Franko Simatovic, to 12 years in prison for aiding and abetting war crimes committed by a Serbian State Security Service special unit during the 1992 Bosnian war.

Between January and August, 987 people lodged their intent to seek asylum in Serbia, a big drop from the 2,084 who lodged their intent to seek asylum during the same period in 2020. The asylum system remained flawed, with difficulties for asylum seekers accessing procedures, low recognition rates, and long delays. Between January and August, Serbia formally registered 107 asylum applications, granting refugee status to 3 and subsidiary protection to 6. In mid-October, none of the five government run camps were overcrowded.

By end of September, 20 unaccompanied children were registered with Serbian authorities compared to 37 during the same period in 2020. Serbia still lacks formal age assessment procedures for unaccompanied children, putting older children at risk of being treated as adults instead of receiving special protection.

A law change first promised in December 2020 to allow same sex couples enter into civil partnerships failed to progress during the year. The pride parade took place in Belgrade in September without incident. LGBT people continue to face violence and discrimination.

In February, OSCE representative on freedom of the media, Teresa Ribeiro, met with the Political Director of the Ministry of Foreign Affairs of the Republic of Serbia, Roksanda Ninčić, and highlighted the importance of safety for journalists, an independent public service broadcaster and media pluralism.

The October EU Commission progress report raised ongoing concerns with media freedom in Serbia and stressed the need to strengthen the overall environment for freedom of expression and journalists.

In September, the Specialist Chambers for Kosovo in The Hague began its first war crimes trial. The defendant, former Kosovo Liberation Army unit commander Salih Mustafa, is charged with murder, torture, cruel treatment, and arbitrary detention during the 1999 Kosovo war.

In a landmark decision in July, the Pristina Basic Court convicted former Serb policeman Zoran Vukotic of wartime sexual violence and involvement in forced expulsions in 1999. Vukotic was sentenced to 10 years.

In March, Kosovo police arrested a Kosovo Albanian with Serbian citizenship on suspicion of war crimes against the civilian population during an operation by Serbian forces in 1999, in which 147 civilians were killed.

Also in March, the Basic Court in Pristina convicted two former police officers, Zlatan Krstic and Destan Shabanaj for their involvement in a 1999 attack that killed four members of an ethnic Albanian family. They were sentenced to fourteen-and-a-half-years and seven-years' imprisonment respectively.

There was no progress during the year towards financially compensating members of the Roma, Ashkali, and Balkan Egyptian communities who were victims of lead poisoning in now-closed camps for displaced persons established by the United Nations Mission in Kosovo (UNMIK). The Human Rights Advisory Panel (HRAP), an independent international body set up to examine complaints of abuses by UNMIK, in 2016 recommended the United Nations pay individual compensation and apologize to victims—the UN has done neither. Since its establishment in 2017, only one state had contributed to the voluntary UN trust fund set up for community assistance projects.

Discrimination against Roma, Ashkali, and Balkan Egyptians in Kosovo remains a problem.

The prosecution of six defendants charged in the 2018 murder of Kosovo Serb politician Oliver Ivanovic, continued in the Basic Court in Pristina with the indictment confirmed in May and the trial starting in July following delays in 2020. Four defendants are accused of having been part of a criminal group that organized the murder of Ivanovic. Two defendants stand accused of evidence-tempering. Ivanovic was shot dead by unknown assailants outside of his office in Mitrovica, northern Kosovo.

During the first nine months of 2021, the United Nations High Commissioner for Refugees registered 261 voluntary returns of members of ethnic minorities to Kosovo from other countries, up from 245 during the same period in 2020. Fifty-four were children.

The Kosovo Ministry of Internal Affairs registered 467 deportations to Kosovo between January and September. The ministry claimed to lack data on the ethnicity of those returned.

The Centre for Equality and Liberty of the lesbian, gay, bisexual and transgender (LGBT) Community in Kosovo (CEL), in October expressed concern about inadequate investigations into threats and hate speech against LGBT people and activists, particularly on social media. In July, CEL reported that an LGBT activist in Pristina was approached by three unknown assailants, who spat in the activist’s face, screaming, “We are going to kill you.” A police investigation was pending at time of writing.

Between January and September, the Association of Journalists of Kosovo registered 18 cases of threats, intimidation and violence against journalists and media outlets. At least nine cases were under investigation at time of writing, but investigations and prosecutions have been slow.

One of the cases involves an assault on a journalist at Gazeta Insajderi, Visar Duriqi, who was physically attacked in Pristina in February by three unknown assailants. The attack is believed to be linked to his reporting. Duriqi suffered a broken nose and broken teeth due to the attack. Police were still investigating at time of writing.

The European Commission October progress report stated that more needs to be done to effectively guarantee the rights of minorities, including Roma, Ashkali, and displaced people and to ensure gender equality in practice. It further stated that concerns remain about freedom of expression, including threats and physical attacks on journalists and public smear campaigns.