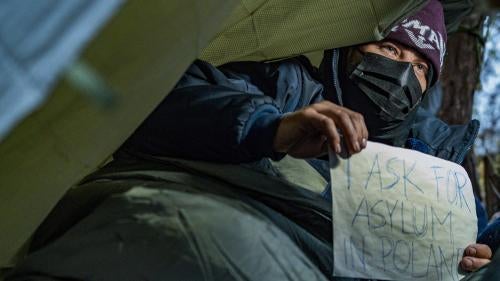 The Polish government continued to undermine rule of law by strengthening its control over the judiciary and smearing journalists and human rights activists critical of the government. An October decision by the politically compromised Constitutional Tribunal rejecting the supremacy of European Union law exacerbated the political and legal crisis in Poland’s relationship with the EU. Attacks and harassment against lesbian, gay, bisexual and transgender (LGBT) and women’s rights activists increased, with several arrested during the year. The government declared a state of emergency on its border with Belarus citing large numbers of migrants arriving through Belarus. Polish authorities have engaged in unlawful pushbacks, sometimes violent, as the numbers of irregular migrant border crossings increased.

The government continued its attacks on the independence of the judiciary. The Constitutional Tribunal, the composition and independence of which continues to be politically compromised, ruled in July that interim measures ordered in October 2020 by the Court of Justice of the European Union (CJEU) to protect the independence of the Polish judiciary were contrary to the Polish constitution. Also in July, the CJEU ordered the temporary suspension of the Polish Supreme Court’s disciplinary body, ruling that the chamber could not be considered an impartial and independent judicial body as defined under EU law. In August, Poland’s government notified the EU that it would dismantle the disciplinary chamber but failed to do so, prompting the European Commission in September to request that the CJEU issue daily fines for failing to comply with the court’s order.

Judges and prosecutors continued to face arbitrary disciplinary proceedings for raising concerns about the rule of law and flawed judicial reforms—a direct interference with their judicial independence.

In April, the compromised Constitutional Tribunal ordered the removal, effective three months after the ruling, of the country’s commissioner for human rights, Adam Bodnar, from his post despite the failure by parliament to appoint his successor following the end of his five-year term in September 2020. Bodnar, who frequently criticized the government’s rule of law and human rights abuses during his mandate, should have stayed in his position until the appointment of a successor. The government instead turned to the Constitutional Tribunal, requesting the tribunal to rule the continuity provision unconstitutional, effectively ending Bodnar’s term prematurely. In July, lawyer and academic Marcin Wiącek became commissioner for human rights after an eight-day vacancy following Bodnar’s removal.

In October, following a motion filed by Poland’s prime minster, the compromised Constitutional Tribunal ruled that CJEU’s interpretation of Articles 1 and 19 of the EU Treaty was not compatible with the Polish Constitution, rejecting the binding nature of EU law and triggering the concerns of the European Commission and a number of other EU member states.

Freedom of Media and Pluralism

The government continued its attacks on independent media. According to Reporters Without Borders (RSF), since PiS came into power in 2015, Poland dropped from 18th to 64th place in its media freedom ranking. Smear campaigns and lawsuits against journalists and outlets remained a problem.

In April, the lower house in parliament, controlled by the ruling PiS party, passed a bill preventing non-European shareholders from owning a majority stake in Polish media companies, effectively impacting the US-owned independent station TVN and its 24-hour news station, TVN24. The approval of the bill followed the suspension of TVN’s licence in July by the Broadcasting Council. In September, the upper house of the parliament rejected the bill and at time of writing, the law was back for consideration at the lower house of the parliament. Following EU criticism, late in September the Broadcasting Council extended the licence.

The state of emergency declared on Poland’s border with Belarus in September following increasing numbers of migrants and refugees bans journalists from reporting from a two kilometer radius from the border, preventing reporters from covering stories of public interest.

The government continued its onslaught on LGBT rights as part of its “anti-gender ideology” rhetoric. LGBT activists reported an increasingly hostile environment making people feel unsafe. Many LGBT people left Poland during the year as a result of increased levels of homophobia and transphobia.

Hate crimes provisions in the criminal code do not include crimes committed on the basis of sexual orientation or gender identity and LGBT people reported that state response to reported threats or attacks is poor.

A local court in the city of Plock in August acquitted three LGBT activists, including Elzbieta Podlesna, charged with insulting religious feelings. The activists had publicly posted images of the Virgin Mary and baby Jesus with rainbows as halos. The judge held that the activists did not intend to offend anyone’s beliefs but to show support for LGBT people and their equal rights.

With increasing number of migrants irregularly crossing from Belarus to Poland since May, the Polish government in September declared a state of emergency on its border with Belarus, banning journalists, activists, humanitarian aid workers, and others from accessing the border area. As of August, credible reports of pushbacks of migrants and asylum seekers to Belarus by Polish border officials, sometimes violent, increased, with five migrant deaths confirmed in the woods on the Poland-Belarusian border.

Polish authorities sought to justify their abusive migration approach by arguing that they were responding to a deliberate policy by Belarusian President Aleksandr Lukashenko of allowing migrants to travel freely into Belarus and towards EU borders, in retaliation for EU sanctions against Belarus. Their justifications ignored the fact that Poland’s actions violate its obligations under EU and international law and put migrants at risk of harm, including death, and the fact that its practice of migrant pushbacks predates those currently entering via Belarus.

In January, an October 2020 Constitutional Tribunal decision virtually banning access to legal abortion, went into effect. Women’s rights groups Abortion Without Borders, Abortion Dream Team, and the Federation for Women and Family Planning reported a significant increase in the number of women and girls contacting them for help in accessing abortion and other sexual and reproductive health care in the year since the ruling. Covid-19 pandemic restrictions continued to make cross-border travel to access abortion particularly difficult and costly.

In July, the European Court of Human Rights (ECtHR) announced that it will address complaints from Polish women who may be victims of violations of the European Convention on Human Rights and Fundamental Freedoms due to the Constitutional Tribunal’s abortion ruling. Poland’s government has failed to effectively implement previous ECtHR judgments concerning access to lawful abortion.

In September, a new bill that would criminalize people who have abortions with up to 25 years in prison was introduced. A draft bill essentially criminalizing sexuality education and supported by the government remains in parliamentary committee.

At time of writing, a July 2020 government request to the compromised Constitutional Tribunal to examine the compatibility with the Polish Constitution of the Istanbul Convention, a Council of Europe instrument to combat and prevent violence against women, was still pending consideration.

Threats and harassment of women’s rights activists continued. Around International Women’s Day in March, staff members from seven organizations reported bomb and death threats, due to their work for or perceived support for women’s rights and abortion. Four groups filed reports to police but stated that, in many cases, police minimized the threats or did not effectively pursue investigations. In October, escalating threats against Marta Lempart, co-founder of Ogólnopolski Strajk Kobiet (All-Poland Women’s Strike), led police to offer her protection during public appearances.

Women’s rights groups reported an increase in reported domestic violence cases following Covid-19 lockdowns and movement restrictions, which resulted in some women and girls being trapped with abusers in the same household with limited possibilities to access help.