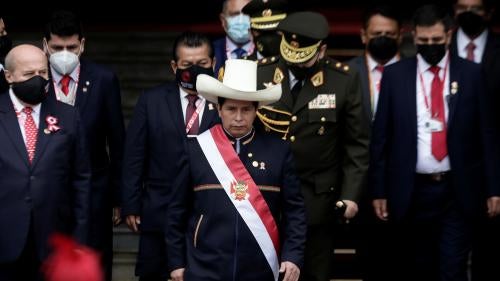 On June 6, Peruvians elected Pedro Castillo as president in what international observers described as free and fair elections. Castillo’s opponent, Keiko Fujimori, made unsubstantiated claims of voter fraud and sought to have the elections annulled through litigation and political pressure. Fujimori’s appeals were dismissed, and Peruvian electoral authorities proclaimed Castillo president on July 19.

Criminal investigations into grave abuses committed during the 20-year internal armed conflict that ended in 2000 remain slow and limited. Violence against women, abuses by security forces, and threats to freedom of expression are also major concerns.

Covid-19 and measures imposed to prevent its spread have had a devastating impact on poverty and inequality, negatively impacting social and economic rights.

Right to Vote and Run for Office

International observers, including from the Organization of American States and the European Union, described Peru’s June 6 presidential runoff elections as free and fair.

As votes were being counted, several political parties, including Fujimori’s Fuerza Popular, sped up a process to appoint six judges to the Constitutional Tribunal outside the regular session of Congress and without complying with legal standards, a move that many described as an attempt to pack the high court in preparation for seeking judicial annulment of the election, amongst other objectives. In July, a court granted a provisional measure ordering Congress to suspend the selection. Many lawmakers announced they would not comply with the ruling, but they were unable to gather the majority needed to appoint new judges.

Efforts to prosecute grave abuses committed during the armed conflict have had mixed results.

Almost 70,000 people were killed or subject to enforced disappearance by the Shining Path, other armed groups, or state agents, during an armed conflict lasting from 1980 to 2000, Peru’s Truth and Reconciliation Commission estimates. The vast majority of those killed were low-income peasants; most spoke Indigenous languages.

Authorities have made slow progress in prosecuting abuses by government forces during the conflict. As of September 2021, courts had issued 48 convictions in 90 cases, Peruvian human rights groups reported.

Former President Alberto Fujimori was sentenced in 2009 to 25 years in prison on charges of crimes against humanity, in connection with kidnappings and two massacres, and various corruption-related offenses.

In March, prosecutors indicted Fujimori and three former health ministers on charges related to the forced sterilizations of mostly poor and Indigenous women during his presidency. The case remains pending. As of June 2021, 6,103 people had registered as victims of these forced sterilizations, the Ministry of Women reported.

At time of writing, criminal investigations continued into the role of former President Ollanta Humala (2011-2016) in killings and other atrocities committed in 1992 and in their cover-up.

In 2018, then-President Martín Vizcarra established a genetic profile bank to help search for those disappeared during the armed conflict. Implementation has been sluggish.

A Shining Path offshoot known as the Militarized Communist Party of Peru (MPCP) continues to operate in the Apurímac, Ene, and Mantaro valleys, in alliance with drug cartels. On May 23, the Peruvian Joint Chiefs of Staff reported that the MPCP committed a massacre, killing 16 civilians in San Miguel del Ene, including four children.

Police used excessive force in Lima against largely peaceful demonstrators protesting the removal of President Vizcarra in November 2020. Over 200 people were injured and two protesters were killed in the protests.

Security forces have also used excessive force when responding to largely peaceful protests that sometimes turned violent over mining and other large-scale development projects. According to the Ombudsperson’s Office, 17 protesters or bystanders died in the context of protests between June 2020 and June 2021.

Law 30151, passed in 2014, granting immunity to police who kill in “fulfilment of their duty,” may make it impossible to hold accountable police who use excessive force resulting in death, despite Decree 1186, issued in 2015, limiting police use of force.

In addition, in March 2020, Congress approved a so-called Police Protection Law, which revokes the provision in Decree 1186 requiring that any use of force be proportionate to the gravity of the threat.

In November 2021, the government deployed soldiers in Lima and Callao to support police efforts to address drug trafficking and organized crime.

Threats to freedom of expression continue to be a concern in Peru, with some journalists facing prosecution for their work under Peru’s criminal defamation laws.

Since late 2018, journalists Paola Ugaz and Pedro Salinas have been repeatedly accused of defamation in connection with their reporting on sexual abuse scandals involving a Catholic lay organization. Currently, Ugaz is facing four apparently spurious lawsuits, all pending at time of writing.

In May, reports emerged that the producer of a popular Sunday news show, “Cuarto Poder,” had been fired because she had refused to take sides in her electoral coverage. This prompted a letter of protest to the television network’s board of directors from the journalists who had been working with her. Soon after, two producers were fired and seven journalists resigned in protest, citing pressure to cover the elections in ways favorable to presidential candidate Keiko Fujimori.

In August, the Castillo administration’s caucus in Congress introduced a bill declaring of “public necessity” the “fair and equitable distribution of the electro-magnetic spectrum.” The bill would allow the government to issue undefined “temporary measures” in cases of emergency (such as the Covid-19 pandemic), including taking over telecommunication services on a “transitory and exceptional basis.”

Gender-based violence is a significant problem in Peru. The Ministry of Women reported 131 “femicides”—defined as the killing of a woman in certain contexts, including domestic violence—in 2020, and 73 from January through June 2021.

Access to legal abortion in Peru is still very limited. Women and girls can legally access abortions only in cases of risk to the life or health of the pregnant person. In 2014 the Ministry of Health adopted national technical guidelines for legal therapeutic abortions, but many health service providers have failed to implement them, leading to barriers to access to legal abortion. These guidelines have since been challenged in two separate court filings by anti-abortion groups. Both cases were dismissed but appeals remained pending at time of writing.

On April 28, 2021, Promsex, a sexual rights organization, petitioned courts to declare a 2009 Constitutional Court ruling that had banned free distribution of emergency contraception pills inapplicable. The case remained pending at time of writing.

President Castillo opposes legalizing same-sex marriage. In a speech on the campaign trail, he said that recognition of trans people was an “idiosyncrasy” that “should be thrown in the garbage.” He has also expressed opposition to including a gender focus in school curricula, which fosters tolerance around gender and sexual diversity.

In July, President Castillo appointed Guido Bellido as prime minister. Media reported a long history of misogynist, homophobic, and transphobic statements from Bellido, prompting calls that he be replaced. In October, Castillo forced Bellido to resign as part of a cabinet shake-up.

Same-sex couples in Peru are not allowed to marry or enter into civil unions. Some courts have begun recognizing same-sex marriages contracted by Peruvians abroad. In November 2020, the Constitutional Court denied recognition to a same-sex couple married abroad.

In August 2020, a judge ordered the civil registry to allow transgender Peruvians to change their name and gender marker on national identity documents. The registry’s appeal remained pending at time of writing.

In February, Herasmo García and Yenes Ríos Bonsano, two Cacataibo Indigenous environmental defenders who participated in their communities’ efforts to repel illegal logging, were killed in the Amazonian region of Ucayali. In March, Estela Casanto, an Asháninka Indigenous leader and environmental defender, was killed in the central region of Junín; her community’s territory is allegedly experiencing land invasions, which she opposed. In July, Mario Marcos López, an Asháninka Indigenous environmental defender who leads a local organization that administers a protected area, was shot in an Amazonian part of the region of Pasco, and later died from his injury. At the time of writting, nobody had been charged in connection with the crime.

More than 496,000 Venezuelans were seeking asylum in Peru at time of writing.

In his inauguration speech, President Castillo issued a “72-hour ultimatum” to “foreign criminals” to leave the country. Xenophobia continues to be a problem, particularly against Venezuelans, who have at times been victims of violent attacks.

In July, the government reintroduced temporary residence permits in a bid to regularize the situation of undocumented migrants, after having eliminated them in 2019. Regulations gave undocumented immigrants 180 days to request a permit allowing them to perform undefined “activities” for a year.

The Covid-19 pandemic, and measures in place to control it, had a devastating impact on poverty and inequality in Peru. In May, government authorities reported that poverty had increased by 9.9 percent in 2020, despite some state measures to mitigate it.

Schools have remained closed in Peru since March 2020 due to the Covid-19 pandemic at time of writing. While the government took some measures to ensure remote teaching, many students have not been able to attend. The Ministry of Education said in September 2020 that 230,000 students had dropped out of school and 200,000 others were not attending classes, despite being enrolled. The ministry had announced schools would start reopening in 2021, but implementation has been sluggish.

In March, Peru ratified the Inter-American Convention on the Protection of the Human Rights of Older Persons, becoming the eighth country to do so.

In August, Peru announced it was withdrawing from the Lima Group, a coalition of states seeking to address the human rights crisis in Venezuela. Peru instead expressed its intention to promote initiatives by the EU-led Contact Group.