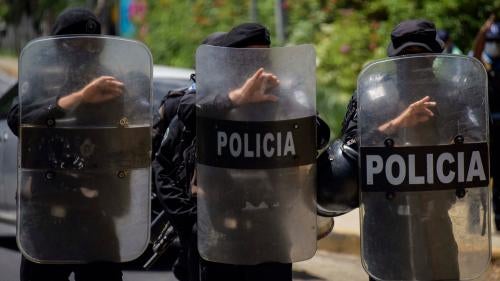 Since taking office in 2007, the government of President Daniel Ortega has dismantled nearly all institutional checks on presidential power. The Electoral Council, stacked with the president’s supporters, removed opposition lawmakers in 2016 and has barred opposition political parties ahead of the 2021 presidential elections. A constitutional amendment approved by President Ortega’s party, which controls the National Assembly, abolished term limits in 2014. President Ortega was elected to a fourth consecutive term in November amid government repression of critics and the political opposition. Many governments from the region and Europe said the elections had not met minimum guarantees to be considered free and fair.

To pave the way for his re-election, authorities arbitrarily arrested and prosecuted government critics and political opponents, including presidential candidates, journalists, lawyers, and leaders of community, business, and student groups.

Police abuses committed during a brutal crackdown by the National Police and armed pro-government groups in 2018 have gone unpunished.

Detention and Prosecution of Critics

Between late May and October 2021, authorities arbitrarily detained 7 presidential candidates and 32 prominent government critics. Prosecutors opened investigations against most on alleged “treason” charges.

Since February, an amendment to the Code of Criminal Procedure has allowed prosecutors to request detentions of up to 90 days without charge; in most cases involving critics, courts have permitted them.

In August, the Attorney General’s Office filed charges against most of the detainees, in criminal proceedings that lacked basic due process guarantees. Charges, carrying prison sentences of 15 to 25 years, ranged from money laundering to, most commonly, “conspiracy to undermine national integrity.” Prosecutors failed to identify specific acts by the defendants to support the charges in at least 14 cases.

Most critics have been held incommunicado and subjected to abuses in detention, including daily interrogations, prolonged solitary confinement, and insufficient food. Authorities have barred critics’ lawyers from participating in public hearings, assigning public defenders instead. Despite repeated requests, most lawyers had no access to court documents for months.

Right to Vote and Run for Office

Election-related changes and laws adopted between October 2020 and February 2021   have been used to deter critical speech, inhibit opposition participation in elections, and keep critics in prison without formal charges, to prevent or limit their political participation.

In December 2020, the National Assembly passed the Law for the Defense of People’s Rights to Independence, Sovereignty, and Self-determination for Peace, prohibiting so-called “traitors” from running for or holding public office. The law defines “traitors” in sweeping terms to include, for example, people who “undermine independence, sovereignty and self-determination” or “damage the supreme interests of the nation.”

In May 2021, the National Assembly approved a legal reform consolidating government control of the electoral process. The reform codifies troubling new grounds for excluding candidates; does not require independent domestic or international electoral observation, which the Organization of American States and the United Nations Human Rights Council deemed essential to ensure credible scrutiny of the elections; and allows the National Police to authorize demonstrations in public spaces, including public campaign events.

After the National Assembly, which is allied with Ortega, appointed new Supreme Electoral Council members in May, the Council stripped legal registration from the main opposition parties.

While the government reported over 13,000 cases and more than 200 deaths, as of September 2021, the nongovernmental organization (NGO) Covid-19 Citizen Observatory registered almost twice as many suspected cases and 4,500 suspected deaths. The government has accused the organization and critical doctors of promoting “health terrorism.” The Inter-American Commission on Human Rights (IACHR) reported that “state agents” were persecuting and harassing members of the Observatory, as well as from the medical associations Nicaraguan Medical Unit (UMN) and Interdisciplinary Scientific Committee.

As of October 2021, just over 8 percent of the population was fully vaccinated.

During the 2018 crackdown, at least 405 doctors, nurses, and other health workers were fired from public hospitals, seemingly for providing care to protesters or criticizing the government.

No specific policies to diminish the negative economic impact of the pandemic were enacted.

Many protestors were detained for months, subjected to torture and ill-treatment including electric shocks, severe beatings, fingernail removal, asphyxiation, and rape. Serious violations of due process and other rights marred prosecutions.

In addition to the 39 detentions carried out since late May 2021, Nicaraguan rights groups reported that over 100 perceived critics detained earlier remained under custody as of October. Many had been held for over a year, under abusive conditions.

Human rights defenders and other critics are targets of death threats, assaults, intimidation, harassment, surveillance, online defamation campaigns, and arbitrary detention and prosecution. Police frequently station themselves outside the houses of government critics, preventing them from leaving, in what amounts to arbitrary arrest. Those harassed are unable to visit friends and family, attend meetings, go to work, or participate in protests or political activities. Some have been detained repeatedly—sometimes being abused during detention—for periods ranging from several days to several months.

Between July 28 and August 26, 2021, authorities ordered the closure of 45 NGOs, including women’s groups, international aid organizations, and several medical associations. Ten others had been closed since 2018. In 2019, Army Commander in Chief Julio César Avilés Castillo called NGOs “coup-plotters”.

Other organizations have announced their suspension of activities after the Law for the Regulation of Foreign Agents went into effect in 2020, requiring the registration of people and groups receiving foreign funding as “foreign agents” and preventing them from running for office.

Police raided the offices of the newspaper Confidencial in May 2021, confiscating equipment and detaining a journalist for several hours without providing warrants for the detention or raid. The newspaper La Prensa ended its print edition in August, when the Customs Authority withheld newsprint and ink supplies it had imported. National Police and the Public Prosecutor’s Office later raided its facilities, seizing items and arresting the newspaper’s general manager.

Between January and October 2021, authorities had arbitrarily arrested and prosecuted three journalists and brought charges or initiated investigations against several journalists who were abroad. At least 16 journalists have been summoned as witnesses in a money laundering investigation into Cristiana Chamorro, a detained presidential candidate who, until its closure, headed an NGO dedicated to press freedom.

Doctors and journalists have been threatened with charges under Nicaragua’s cybercrime law during interviews with prosecutors, according to news media. The law, passed in October 2020, criminalizes a wide range of online communications, including by punishing with sentences of up to five years the “publication” or “dissemination” of “false” or “distorted” information on the internet that is “likely to spread anxiety, anguish or fear.”

On September 7, 2021, the Attorney General’s Office charged activist Amaru Ruíz under the cybercrime law. He was accused of “dissemination of false information” to “instill instability and insecurity that endangers national sovereignty” after he allegedly said “the state and its institutions had deliberately failed to investigate” the murders of Indigenous persons in the North Caribbean Coast in 2020 and 2021.

Defense lawyers have experienced escalating harassment and prosecutions. Some remain in the country, facing threats, and others have fled. Two were arrested and prosecuted for “conspiracy to undermine national integrity.”

The Human Rights Collective “Nicaragua Nunca +”, an NGO based in Costa Rica that documents human rights abuses in Nicaragua, reported that the Ortega government’s sustained "persecution, harassment, and prosecution" had forced at least 100 journalists into exile, including 25 in 2021.

In August 2021, at least nine Indigenous persons were reportedly killed, and two women sexually abused, in an attack related to a dispute over gold mining in the Mayangna Sauni As Indigenous territory. The government granted the mining concession without prior consultation with the community. Homicides and aggressions “related to territorial disputes” in the area since January 2020 “remain unpunished,” the United Nations Office of the High Commissioner for Human Rights (OHCHR) reported. Both OHCHR and the IACHR point to a larger, persistent failure of the Nicaraguan government to title and protect Indigenous territories from invasions.

Nicaragua has prohibited abortion under all circumstances since 2006, even when a pregnancy is life-threatening or results from rape or incest. Those who have abortions face prison sentences of up to two years; medical professionals who perform them can face up to six years. The ban forces women and girls confronting unwanted pregnancies to seek illegal and unsafe abortions, risking their health and lives.

Rates of domestic abuse, violence against women, and femicide, defined in Nicaraguan law as a crime committed by a man who murders a woman “in the public or private sphere,” have increased since 2019, OHCHR reported in February 2021.

No international monitoring bodies have been allowed into the country since 2018, when the government expelled the IACHR Special Monitoring Mechanism for Nicaragua, the IACHR-appointed Interdisciplinary Group of Independent Experts, and OHCHR.

In February 2021, OHCHR urged the government to enact meaningful electoral reforms, end arbitrary arrests, guarantee freedoms to civil society, investigate and prosecute rights abuses in the context of protests, and amend laws that seriously restrict rights to freedom of expression and association and could undermine free and fair elections. The IACHR has also continued to monitor the situation from afar.

The UN Human Rights Council adopted a resolution in March urging the government to repeal or amend legislation that undermines fundamental rights and to adopt electoral reforms to ensure free and fair elections with international oversight.

In June, the OAS Permanent Council expressed concern that the Ortega regime had not implemented electoral reforms consistent with international standards before a deadline set for May. The resolution condemned harassment and arbitrary restrictions on presidential candidates, opposition parties, and independent media. In November, the OAS Permanent Council condemned the elections saying they “were not free, fair or transparent, and lack[ed] democratic legitimacy.”

As of September, the US Treasury Department had imposed targeted sanctions on 26 Nicaraguans for abuses or corruption, including 23 pursuant to Executive Order 13851 and 3 pursuant to the Global Magnitsky Act of 2016, which allows for sanctions against human rights violators. Of the 26, 6 were also sanctioned pursuant to the Nicaraguan Human Rights and Corruption Act of 2018. The Treasury Department has also sanctioned nine entities, including financial and state security institutions.

In November, the US Congress passed the RENACER Act to monitor, report on, and address corruption by the Ortega government, as well as human rights abuses by Nicaraguan security forces. The law had been approved by the Senate in August.

The European Parliament, in July, condemned the Ortega government’s repression of opposition groups and other opponents and called for the release of arbitrarily detained political prisoners, including presidential candidates. In August, the EU imposed targeted sanctions on eight more Nicaraguans accused of “serious human rights violations” and undermining democracy, including Vice President Rosario Murillo, for a total of 14 Nicaraguans sanctioned since 2020. Sanctions against all 14 were renewed for another year in October 2021. Following EU foreign ministers’ discussions in October, EU foreign policy chief Josep Borrell once again condemned the Nicaraguan government's repression, referring to it as ‘one of the worst dictatorships in the world’, whose scheduled elections were going to be ‘fake’.

In July, Canada imposed targeted sanctions on 15 government officials implicated in human rights violations, for a total of 24 sanctioned.