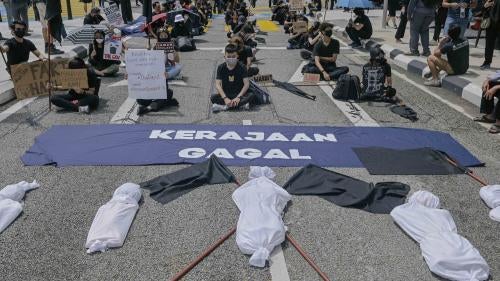 Faced with political instability, the Malaysian government resorted to heavy-handed tactics, investigating, and arbitrarily arresting those critical of the government and its policies, pursuing a hardline anti-migrant policy, and threatening enhanced action against lesbian, gay, bisexual, and transgender (LGBT) people. In August, Prime Minister Muhyiddin Yassin resigned and was replaced by Ismail Sabri, but there was little change in the government’s approach to human rights.

The government continued to use a range of broad and vaguely worded laws, including the Sedition Act and section 233 of the Communications and Multimedia Act (CMA), to prosecute critical speech.

On April 23, 2021, police arrested graphic artist and activist Fahmi Reza for a Spotify playlist he had created as a satirical response to a controversial tweet by Malaysia’s queen. After a four-month sedition investigation, the police dropped the case. Reza was arrested again on October 4 in connection with a caricature of the Malaysian prime minister.

In May 2021, the authorities opened an investigation into political cartoonist Zulfikar Anwar Ulhaque, known as Zunar, for alleged violations of the CMA and penal code section 505(c) for a satirical drawing that mocked the Kedah state chief minister.

In July, the authorities opened investigations into the creators of a short animated film depicting the abuse that one boy said he suffered in police custody, for criminal defamation and other violations of the penal code. The same month, authorities formally charged activist Heidy Quah with violating the CMA for a June 2020 Facebook post alleging poor treatment of refugees at an immigration detention center.

Those participating in peaceful protests have also been the target of police investigations.

On April 24, authorities arrested activist Mukmin Nantang and six others for protesting the 14-day extension of strict movement control orders in a village in Sabah. On July 6, police announced they were investigating for sedition and other offenses the “black flag” campaign, which urged people to display black flags to voice their disappointment with the government. At least 31 people who participated in a black flag vehicle convoy on July 24 were summoned for questioning.

On July 21, a youth coalition announced it would hold a protest on July 31 against the government’s handling of the Covid-19 pandemic. On July 29, police arrested youth activist Sarah Irdina at her home. On the same day, police questioned three coalition members under the CMA and a penal code section criminalizing “making statements conducive to public mischief.”

On August 19, 31 people who were holding an outdoor candlelight vigil for those who died of Covid-19 were forcibly detained by police. At least one participant subsequently filed a police report over physical injuries allegedly caused by the police.

Freedom of the press declined during the year. On February 18, the country’s highest court held online news portal Malaysiakini in contempt of court for five comments posted by readers, even though the portal removed the comments shortly after being notified of their presence. The court imposed a fine of RM500,000 (US$124,000). The authorities opened a contempt investigation into the outlet’s editor-in-chief, Steven Gan, for commenting on the court’s ruling.

In May, the police summoned two Malaysiakini journalists for questioning about their coverage of allegations that police brutality was the cause of a death in detention. In July, they summoned Boo-Su Lyn of health care news portal Code Blue for questioning over an article about a Covid-19 outbreak at a vaccination center.

On July 2, the Federal Court upheld a defamation ruling against Malaysiakini in a decision that narrowly construed the common law public interest defense, posing a serious risk to media freedom. The case, brought by Raub Australian Gold Mining Company, related to articles and videos posted by Malaysiakini about the possible impact of air pollution from a gold mine.

Police abuse of suspects in custody continues to be a serious problem, as does a lack of accountability for such offenses. The standard of care for those in detention is problematic, with detainees dying of treatable illnesses. According to the home minister, as of August, 42 people had died in custody, with 28 of those deaths in immigration detention centers.

Malaysia has not ratified the 1951 Refugee Convention. Over 179,000 refugees and asylum seekers, mostly from Myanmar, are registered with the United Nations High Commission for Refugees (UNHCR) office but are not granted legal status and remain unable to work or enroll in government schools.

The government has denied UNHCR access to immigration detention centers since August 2019, and the home minister has rejected calls for access. Malaysia’s Home Ministry reported that, as of October 26, 2020, 756 children were being held in immigration detention facilities nationwide, including 326 from Myanmar who are detained without parents or guardians. In May, the Suhakam child commissioner expressed concern that Rohingya girls who had been trafficked to Malaysia as child brides were being detained in an immigration detention center. In February, Malaysia deported 1086 Myanmar nationals just weeks after a coup overthrew that country’s elected government.

The immigration authorities conducted repeated raids and detained thousands of undocumented workers, despite concerns that doing so would discourage them from seeking vaccination or treatment for Covid-19.

The United States downgraded Malaysia to Tier 3 in its annual Trafficking in Persons report, noting that the government was “not making significant efforts” to eliminate trafficking.

Malaysia restricts the rights of followers of any branches of Islam other than Sunni, with those following Shia or other branches subject to arrest for deviancy.

In March, the government appealed a High Court ruling that struck down a 1986 directive forbidding non-Muslims from using the word "Allah” and other Islamic words.

In September, the government announced  it was drafting a new law to restrict the propagation of non-Islamic religions in the Federal Territories.

Malaysia permits the death penalty for various crimes and makes the sentence mandatory for 11 offenses.

Malaysia detains individuals without trial under restrictive laws. The Security Offenses (Special Measures) Act, or SOSMA, allows for preventive detention of up to 28 days with no judicial review for a broadly defined range of “security offenses.” On September 1, the home minister stated that individuals “issuing statements that could incite others to the point of causing public fear” could face action under SOSMA.

Both the 1959 Prevention of Crime Act and the 2015 Prevention of Terrorism Act give government-appointed boards the authority to impose detention without trial for up to two years, renewable indefinitely, to order electronic monitoring, and to impose other significant restrictions on freedom of movement and association. No judicial review is permitted for these measures.

Discrimination against LGBT people remains pervasive in Malaysia. Federal law punishes “carnal knowledge against the order of nature” with up to 20 years in prison and mandatory whipping. Numerous state Sharia laws prohibit both same-sex relations and non-normative gender expression, resulting in frequent arrests of transgender people. In February, the Federal Court ruled that section 28 of Selangor’s Shariah Criminal Offences Enactment, which criminalizes sexual intercourse “against the order of nature,” was invalid.

Authorities have proposed a range of changes to Sharia regulations that, if passed, would negatively impact LGBT people. These include harsher sentencing for same-sex conduct and gender expression. In September, the Perlis state fatwa committee announced that those in gender-nonconforming clothing were banned from entering mosques.

In January, Islamic authorities arrested Nur Sajat, a cosmetics entrepreneur and social media personality, on charges of “insulting Islam” by dressing in clothing typically associated with women at a religious event. On February 23, after she failed to appear in court, the Sharia court issued an arrest warrant for her. On February 25, the Islamic authorities announced the deployment of at least 122 law enforcement officers “to find and arrest Nur.” In October, Malaysia filed extradition requests for Nur with Thailand and Australia. On October 18, Nur Sajat announced that she was in Australia, where she has been granted asylum.

Female students have described being subjected to “period spot checks” in some schools to prove that they are menstruating and can be excused from fasting. A student who reported on social media that her teacher made jokes about rape in class was threatened with expulsion, harassed on social media, and investigated for "intentional insult with intent to provoke a breach of the public peace."

Malaysia continues to permit child marriage under both civil and Islamic law. Girls ages 16 and 17 can marry with the permission of their state’s chief minister. For Muslims, most state Islamic laws set a minimum age of 16 for girls and 18 for boys, but permit marriages below those ages, with no apparent minimum, with the permission of a Sharia court. Widespread school closures due to Covid-19 may have increased risks of child marriage, as research shows that leaving education is highly correlated with girls being married off.

Children in Malaysia were unable to attend in-person classes due to Covid-19 restrictions for most of the year. The government began a phased reopening of school starting in October. The prolonged closure exacerbated existing inequalities, as many underprivileged students did not have the tools to access online learning.

Malaysia was one of the first countries to call for the Association of Southeast Asian Nations (ASEAN) to play a role in resolving the crisis in Myanmar, and strongly supported the decision to exclude the Myanmar commander-in-chief from the annual ASEAN summit in October. Malaysia has also been supportive of calls for equitable distribution of Covid-19 vaccines. The country has been elected to a seat on the United Nations Human Rights Council for the 2022-2024 term.