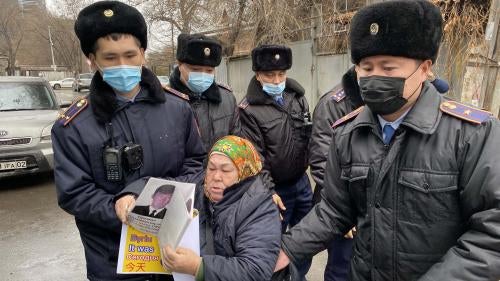 Kazakhstan was rocked in early January 2022 by nationwide anti-government protests and violence in Almaty, the country’s largest city. As of January 11, official and media reports indicate that dozens of people had been killed, including two children, thousands injured, and approximately 10,000 people had been detained.

During 2021, the Kazakh government continued to claim it is pursuing human rights reforms, despite the absence of meaningful improvements in its rights record. Authorities cracked down on government critics using overbroad “extremism” charges, restricted the right to peaceful protest, suppressed free speech, and failed to address impunity for domestic violence and torture. The government did not extend Covid-19 related economic assistance into 2021, although the pandemic continued to affect living standards, employment, and schooling.

There was an increase in spontaneous strikes, with workers across the country demanding better pay and working conditions. In June, the International Labour Organization (ILO) heavily criticized Kazakhstan for violating international labor rights standards. In September, a Russian-American Xinjiang researcher was arbitrarily banned from Kazakhstan for five years. A new inclusive education law is a positive development, but many children with disabilities continue to be denied the right to education.

Protests started on January 2 2022 in Zhanaozen, western Kazakhstan, in response to energy price rises, and quickly spread to other cities, with demands growing to include economic and political issues. On January 5, law enforcement used tear gas and stun grenades to break up protests, while unknown people in civilian clothes in Almaty started attacking police officers and public buildings and looting shops. President Kasym-Jomart Tokaev replaced his government, disrupted internet access, declared a state of emergency, and requested miiliary help from the Collective Security Treaty Organisation, a six-country regional military alliance including Russia. On January 7 he ordered troops to “shoot to kill without warning.” At time of writing, there were few details of the conditions facing those detained.

The human rights defender, Max Bokaev, imprisoned for five years in 2016 for peacefully protesting against proposed land reforms, was released on February 4, but remains subject to heavy restrictions. On February 3, police temporarily detained the Uralsk-based journalist Lukpan Akhmedyarov to prevent him from meeting Bokaev.

The UN Working Group on Arbitrary Detention on May 28 found that the imprisoned labor activist Erzhan Elshibaev had been arbitrarily detained. The group called for his immediate release and said he should be provided compensation and other reparations.

Authorities continued to routinely interfere and restrict the right to peaceful assembly by detaining, fining, or sentencing to short-term custodial sentences people who tried to exercise this right. Police also increasingly resorted to “kettling” protesters, de facto detaining groups on the street for up to 10 hours. On rare occasions, city authorities granted permission for protests, for example in Uralsk in late February, to a group of approximately 200 people calling for the release of political prisoners.

In February, a small group of ethnic Kazakhs began to gather daily outside the Chinese consulate in Almaty to demand that their detained or disappeared loved ones in Xinjiang, China, be released and reunited with them in Kazakhstan. In June and July police detained several protesters who were later sentenced to up to 17 days’ administrative detention.

Orynbai Okhasov, an activist from Uralsk who was sentenced to a one-year parole like sentence in mid-November for alleged participation in a banned “extremist” organization, spent 45 days in jail in July and August serving three consecutive administrative sentences for violating Kazakhstan’s restrictive public assembly law.

Journalists continue to face harassment, arrest, physical attack, and prosecution for carrying out their work. In September, parliament passed a draft law on the protection of children in its first reading that contains provisions threatening freedom of expression. The provisions, if adopted, would require foreign social media platforms to register locally and comply with content removal requests within 24 hours. In May, police initiated a criminal investigation on charges of “disseminating knowingly false information” against Temirlan Ensebek, a 25-year-old who ran a satirical Instagram account for less than a month before shutting it down.

In July, the Organized Crime and Corruption Reporting Project, a member of the international investigative journalism collaboration Pegasus Project, reported that the phone numbers of human rights defender, Bakhytzhan Toregozhina, and journalists Serikzhan Mauletbay and Bigeldy Gabdullin appear to have been selected for targeting with spyware.

In March, the UN Human Rights Committee found that the state had violated Dmitry Tikhonov’s rights to freedom of expression and peaceful assembly by detaining him in February 2014 while he was trying to report on a peaceful protest.

In August, an Almaty court convicted the blogger Ermek Taichibekov on overbroad criminal charges of “inciting national discord through mass media” and sentenced him to seven years in prison.

The OSCE Media Freedom Representative Teresa Ribeiro, upon concluding a visit to Kazakhstan on September 17, said she raised with government officials in Kazakhstan the issue of journalists’ safety, disinformation, legislative developments, and other challenges.

Kazakh authorities have continued their multi-year crackdown on government critics, targeting with criminal prosecution perceived or actual members of banned “extremist” groups, including for participating in peaceful rallies. Courts convicted dozens of people in 2021, subjecting them to restrictions including multi-year bans on engaging in political activities, and imprisoned at least seven people: Askar Kaiyrbek, Erbol Eskhozhin, and Ulasbek Akhmetov, as well as Askhat Zheksebaev, Kairat Kylyshev, Abai Begimbetov, and Noyan Rakhimzhanov.

On July 30, Aset Abishev, who was imprisoned in 2018 for alleged participation in the banned Democratic Choice of Kazakhstan, was released on parole after serving two-and-a-half years of a four-year sentence.

There was an increase in spontaneous workers’ strikes and local initiatives to unionize in 2021, including in Aktobe region, Nursultan, and Almaty. Authorities in some cases took legal action against workers for organizing “illegal” strikes.

In June the International Labour Organization issued highly critical conclusions and recommendations on Kazakhstan’s compliance with the Freedom of Association and Protection of the Right to Organise Convention, instructing the government to “stop judicial harassment practices of trade union leaders” and review the cases of individual union leaders.

President Kasym-Jomart Tokaev has repeatedly noted that domestic violence is an acute problem and protection of women’s rights is key. Yet in January, parliament suspended review of a new draft domestic violence law and has not, since then, proposed any new legislation offering strengthened protection to women from family abuse. Meanwhile, police and service providers lack appropriate training to identify, prevent, and adequately respond to domestic violence.

Hundreds of people participated in a march authorized by Almaty city authorities for the first time celebrating International Women’s Day on March 8. Participants called for gender equality and criminalization of domestic violence.

In June, Kazakhstan adopted a new inclusive education law which removed multiple references to a problematic medical and educational exam as a prerequisite for enrolment in a mainstream school and introduced new provisions that make it state responsibility to provide children with disabilities with reasonable accommodations.

In practice, many children do not have access to inclusive education and remain isolated in segregated special schools or residential institutions, where they can face violence, neglect, physical restraint, and overmedication. Kazakhstan has no national plan to close such institutions. Covid-related restrictions on in-person education in the first half of the year continued to negatively impact children with disabilities, because of poor internet connectivity and because digital learning platforms are not sufficiently adapted to their needs.

Kazakhstan does not have an anti-discrimination law, nor does its constitution prohibit discrimination on the basis of gender identity or sexual orientation. The process for changing one’s legally recognized gender remains invasive and humiliating.

In May in Shymkent and again in July in Karaganda mobs of hostile men attacked small closed-door trainings on women’s rights led by Feminita, a rights group that focuses on lesbian, bisexual, and queer women. In response, police detained Feminita co-leaders Zhanar Sekerbaeva and Gulzada Serzhan and escorted them out of each city.

On May 17, over a dozen ambassadors of embassies in Nursultan issued a joint statement on the International Day Against Homophobia, Biphobia, and Transphobia expressing solidarity with LGBT people and calling on the government to protect all citizens of Kazakhstan from discrimination.

Torture and ill-treatment occur with impunity in Kazakhstan. Radio Azattyk, the Kazakh branch of Radio Free Europe/Radio Liberty, reported in July that out of 120 torture allegations that prison facilities had registered between January and May, no cases had been sent to court.

After members of the National Preventive Mechanism (NPM), an anti-torture body, visited the 68-year-old poet and dissident Aron Atabek and reported that Atabek’s health had significantly deteriorated, he was hospitalized. On October 1, Atabek, who was sentenced in 2006 to 18 years in prison for his alleged role in organizing mass riots outside Almaty, was released on parole on grounds of his ill-health. He was completely emaciated. Several weeks after his release, Atabek died in a hospital in Almaty.

Kazakhstan’s economy recovered slightly in 2021, but following the economic downturn that occurred in 2020 in connection with the Covid-19 pandemic and a weak social safety net, Kazakhstan’s poverty rate has increased to 12-14 percent, according to World Bank estimates. Mothers with multiple children across Kazakhstan continued in 2021 to intermittently protest for increased social and housing benefits.

The European Parliament (EP) in February issued a strongly worded resolution on the human rights situation in Kazakhstan, focusing on the crackdown on civil society, torture, free speech, and politically motivated persecution. The EP called on the government to “end all forms of arbitrary detention, reprisals and harassment” against activists and other groups and to amend the new peaceful assembly law.

In October, Kazakhstan was elected to sit on the UN Human Rights Council from January 2022.