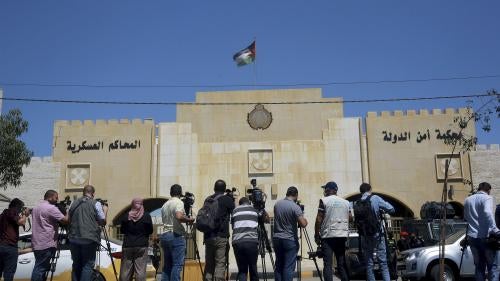 In 2021, Jordanian authorities did not rescind a state of emergency declared in March 2020 in response to the Covid-19 pandemic, granting the prime minister sweeping powers to rule by decree.

On July 12, Jordan’s State Security Court convicted a former high-level official and a little-known royal family member of “sowing discord” and “inciting opposition to the political regime,” sentencing both of them to 15 years in prison for allegedly undertaking a plot to “mobilize public opinion against the ruling regime in the kingdom and propose Prince Hamza [King Abdullah II’s younger half-brother] as an alternative to take rule.”

Jordanian authorities further curtailed press freedom in 2021 by issuing arbitrary press gag orders prohibiting reporting on important local developments, including local reporting on the ongoing crackdown on the independent Teachers’ Syndicate and the April arrests of individuals connected to Prince Hamza accused of undertaking a plot to undermine the country’s leadership. Jordanian press outlets did not report on revelations about the king’s real estate holdings in the United States and United Kingdom as part of the Pandora Papers reporting in October.

In 2021 Jordan’s Ministry of Social Development convened a committee to draft amendments to Jordan’s Law on Associations (NGO law) but as of October 2021 the committee, which included representatives of local and international nongovernmental organizations (NGOs), had yet to issue the draft amendments.

Under the Public Gatherings Law amended in March 2011, Jordan did not require government permission to hold public meetings or demonstrations, but organizations and venues continued to be required to obtain permission from the Interior Ministry or General Intelligence Department to host events. In August, Jordanian security authorities blocked a public book launch hosted in part by the Ministry of Culture.

Jordanian authorities in 2021 continued a crackdown on the independent Teachers Syndicate, keeping it shuttered on dubious legal grounds, and on December 31, 2020, a Jordanian court sentenced the syndicate leaders to one year in prison on vague charges after an unfair trial.

By late 2021, over 670,000 people from Syria had sought refuge in Jordan, according to the UN High Commissioner for Refugees (UNHCR). Over 85 percent of Syrians lived outside refugee camps in rented accommodation.

According to the UNHCR, Jordan also hosted asylum seekers and refugees from other countries in 2021, including 66,665 Iraqis, 12,866 Yemenis, 6,013 Sudanese, 696 Somalis, and 1,453 from other countries. Authorities continued to enforce a January 2019 decision banning the UNHCR from registering as asylum seekers individuals who officially entered the country for the purposes of medical treatment, study, tourism, or work, effectively barring recognition of non-Syrians as refugees and leaving many without UNHCR documentation or access to services.

Jordanian authorities in 2021 deported at least six Yemeni asylum seekers registered with UNHCR and issued deportation orders against others who made asylum claims. The authorities handed down most of the deportation orders after the Yemenis attempted to apply for work permits and regularize their immigration status in the country.

Authorities continued to implement the Jordan Compact, the 2016 agreement between the Jordanian government and donor countries, which aimed to improve the livelihoods of Syrian refugees by granting new legal work opportunities and improving the education sector. By the end of 2020, labor authorities had issued or renewed at least 215,668 work permits for Syrians since 2016, although many of these were renewals. The number of currently valid individual permits was not reported but was apparently much lower. Most professions remained closed to non-Jordanians, and many Syrians continued to work in the informal sector without labor protections.

The roughly 230,000 school-age Syrian refugees in Jordan face multiple obstacles to education that are most acute for children ages 12 and older, including poverty-driven child labor and child marriage, lack of affordable school transportation, government policies that limit access to education, and lack of inclusive education and accommodation for children with disabilities.

Only a quarter of secondary-school-age Syrian refugee children in Jordan were enrolled in school. Non-Syrians refugees and asylum seekers were in many cases prevented from enrolling their children in school in 2021. Children without official identification numbers were unable to access online learning platforms during Covid-19 school closures.

Authorities did not allow aid deliveries from Jordan to tens of thousands of Syrians at Rukban, an unofficial camp along Jordan’s border with Syria. Authorities deported Syrians to Rukban in 2020 without permitting them to challenge their deportations.

The economic downturn and drastic lockdown measures have undermined the livelihoods of thousands of Syrian refugees. Syrian refugees who voluntarily returned to Syria between 2017 and 2021 from Jordan faced grave human rights abuses and persecution at the hands of Syrian government and affiliated militias, including torture, extra-judicial killings, and kidnappings. While Jordan does not impose a formal re-entry ban on Syrian refugees, Jordanian border guards said they could not re-enter Jordan for three to five years, denying returnees the right to claim asylum if, having returned to Syria, they again face persecution.

Jordan’s personal status code remains discriminatory, despite amendments in 2019. Women need the permission of a male guardian to marry for the first time, and marriages between Muslim women and non-Muslim men are not recognized. Women cannot travel abroad with their children, as men can, without the permission of their child’s father or male guardian or a judge. While women can travel outside the country without needing permission, authorities sometimes comply with requests from male guardians to bar their unmarried adult daughters, wives, and children from leaving the country. Authorities also arrest women reported as “absent” for fleeing their home by their male guardians under the Crime Prevention Law.

Article 98 of Jordan’s penal code, amended in 2017, states that the “fit of fury” defense does not allow mitigated sentences for perpetrators of crimes “against women,” but judges continued to impose mitigated sentences under article 99 if family members of victims did not support prosecutions of their male family members. Article 340 of the Penal Code also allows a man to receive a reduced sentence if he kills or attacks his wife or any of his female relatives in the alleged act of committing adultery or in an “unlawful bed.”

Such discriminatory laws leave women exposed to violence. Jordan’s Higher Population Council reported in October that it recorded a “dramatic increase” in domestic violence in 2020 with a total of 54,743 cases, with 82 percent perpetrated by husbands against their wives. In 2021, Tadamon (Sisterhood is Global Institute Jordan - SIGI), reported that men in Jordan had murdered more than 14 women between January and October 2021. Similarly, the penal code and Juveniles Act do not prohibit corporal punishment and allow parents to punish children in accordance with "general norms.”

Article 9 of Jordan’s nationality law does not allow Jordanian women married to non-Jordanian spouses to pass on their nationality to their spouse and children. In 2014, authorities issued a cabinet decision purporting to ease restrictions on access to key economic and social rights for non-citizen children of Jordanian women, but the measures fell short of expectations. Non-citizen children of Jordanian women no longer require work permits for employment, but many professions in Jordan remained closed to non-Jordanians.

Jordan has no laws that explicitly criminalize same-sex relations. The penal code includes vague “immorality” provisions that could be used to target sexual and gender minorities. Jordanian law does not prohibit discrimination based on sexual orientation and gender identity.

Jordan summarily deports foreign nationals found to be HIV-positive, and LGBT people living with HIV have reported facing stigma and discrimination by medical professionals and employers, without any legal recourse.

In March, Jordanian authorities issued a suspension of detentions for failure to repay a debt until the end of the year. The announcement came shortly after Human Rights Watch issued a report documenting Jordan’s harsh treatment of people unable to repay their debts. The report showed how in the absence of an adequate social security net, tens of thousands of Jordanians feel compelled to take out loans to cover utilities, groceries, school fees, and medical bills, often using unregulated informal lenders, and face months of detention when they fail to repay.

As of November, authorities had not carried out any executions in 2021.

Local governors continued to use provisions of the Crime Prevention Law of 1954 to place individuals in administrative detention for up to one year, in circumvention of the Criminal Procedure Law.

In 2021, the US president requested US$1.275 billion in Foreign Military Financing, Economic Support, and other aid to Jordan. This exceeds the amount outlined in the 2018 Memorandum of Understanding between the United States and Jordan. The US did not publicly criticize human rights violations in Jordan in 2021, except in annual reports of the State Department and other agencies.

Jordan is a member of the Saudi Arabia and UAE-led coalition fighting the Houthi forces in Yemen, which continues to commit violations of international human rights and humanitarian law in Yemen.