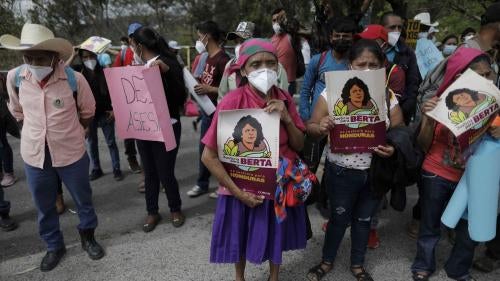 Violent organized crime continues to disrupt Honduran society and push many people to leave the country. Journalists; environmental activists; human rights defenders; lesbian, gay, bisexual, and transgender (LGBT) individuals; and people with disabilities are among the groups targeted for violence.

Impunity remains the norm. Efforts to reform public security institutions have stalled. Marred by corruption and abuse, the judiciary and police remain largely ineffective. Support and resources from a four-year Organization of American States (OAS) mission to strengthen the fight against corruption and impunity, concluded in January 2020, have not produced lasting reforms. Anti-corruption prosecutors have been left defenseless.

Gang violence is widespread in and around urban areas. Estimates of the number of active gang members range from 5,000 to 40,000. From 2015 through 2019, authorities arrested 4,196 gang members, the National Police reported.

Gangs exercise territorial control over some neighborhoods and extort residents throughout the country. They forcibly recruit children and sexually abuse women, girls, and LGBT people. Gangs kill, disappear, rape, or displace those who resist.

Gangs, particularly the Mara Salvatrucha (MS-13) and the 18th Street Gang (Barrio 18), are considered largely responsible for Honduras’ murder rate, and are infamous for extortion and drug peddling. Although Honduras has reduced its homicide rate by half since 2011, it remains one of the world’s highest, with 44.8 murders per 100,000 population in 2019.

Weak state institutions and abuses by security forces have contributed to persistent gang violence. There have been repeated allegations of collusion between security forces and criminal organizations.

The criminal justice system regularly fails to hold accountable those responsible for crimes and abuses.

In January 2020, the government shut down the Mission to Support the Fight against Corruption and Impunity in Honduras (MACCIH). Established in 2016 by the government and the OAS, MACCIH contributed to the prosecution of 133 people, including congresspeople and senior officials, 14 of whom stood trial.

Since MACCIH left, the Attorney General’s Office has harassed and intimidated the head of its own anti-corruption criminal enterprise office, Prosecutor Luis Javier Santos, and members of his team. International organizations, the United States, and the United Kingdom have expressed their support for Santos’ work.

In 2019, the UN special rapporteur on the situation of human rights defenders called Honduras one of the most dangerous countries for them in Latin America. Activists say the government’s Mechanism for the Protection of Journalists, Human Rights Defenders, and Justice Activists, created in 2015, is ineffective.

In June 2021, the Inter-American Commision on Human Rights (IACHR) estimated a 90 percent rate of impunity for crimes committed against human rights defenders in Honduras. The IACHR received information on frequent threats of lawsuits and prosecutions, including for slander and libel, hindering human rights work in Honduras.

In July, the Office of the High Commissioner of Human Rights (OHCHR) and the IACHR urged the government to refrain from charging Garifuna women with damage, threats, theft, and usurpation of lands. Honduras has failed to uphold the Garifuna’s right to collective tenure over their lands and to promptly and adequately investigate threats and acts of harassment against community leaders, the IACHR stated in 2020.

In August, a former director of the Honduran hydroelectric company DESA was convicted of organizing the 2016 assassination of environmental and Indigenous rights defender Berta Cáceres, who opposed construction of a hydroelectric dam on the Gualcarque river. In 2019, seven others were convicted for carrying out the killing. The trial has been marred by irregularities.

Honduras is one of the Western Hemisphere’s deadliest countries for journalists, with security forces representing their biggest threat, Reporters Without Borders noted in 2021. Since 2010, 42 journalists have been killed, UNESCO reported. According to the Inter-American Press Association, 29 journalists were beneficiaries of official protective measures.

In February, journalist Henry Fiallos and his family received anonymous death threats after he covered a femicide in which police officers were implicated. In August, he reported having been brutally beaten by police officers while doing his job.

The groups most likely to be internally displaced are children subjected to forced gang recruitment, professionals and business owners who face extortion, domestic violence survivors, and LGBT people and members of ethnic minorities who face violence and discrimination, the IACHR has reported. Rural communities subject to increased food insecurity due to prolonged drought and extreme weather events are also vulnerable to displacement.

A bill was introduced in 2019 to prevent, assist, and protect people internally displaced by violence. In June 2020, Congress passed a new penal code that introduced the crime of internal displacement, punishing, with prison sentences of six to nine years, those who, through violence or intimidation, force someone to abandon or change their place of living.

From January to September 2021, 31,894 Hondurans requested asylum in Mexico, the Mexican Commission for Refugee Aid (COMAR) reported—filing more than 35 percent of Mexico’s total asylum petitions. From January to July, 7,007 accompanied and 676 unaccompanied Honduran children requested asylum. In a 2020 survey by UNHCR and UNICEF, half of Hondurans interviewed in Mexico named violence as the main reason for their leaving.

As of October 17, 42,357 Hondurans were deported in 2021 to Honduras—more than the total throughout 2020—the government reported. Of those, 37,114 were deported from Mexico and 4,689 from the US. Human Rights Watch documented mass expulsion of migrants and asylum seekers, including Hondurans, from Mexico to a remote jungle in Guatemala.

LGBT people are frequently targets of discrimination, extortion, and violence from gangs, the national civil police and military police, and members of the public. Discrimination is also common in schools, the workplace, and in the home. Violence against LGBT individuals displaces many internally and forces others to leave the country to seek asylum.

In June, the Inter-American Court of Human Rights held that Honduras violated the rights to life and personal integrity of Vicky Hernández, a transgender woman killed during the 2009 coup. The court found that Hernández suffered harassment by police the night before she was killed, the police and military had effective control of the streets on the night she died, and Honduras conducted no effective investigation into her killing. The court ordered Honduras to train security forces to investigate anti-LGBT violence and to adopt a process allowing people to change the gender listed on their documents to match their identity.

In September, President Hernández accused those who advocate for same-sex marriage of “attacking Christian principles” and “the notion of the family.”

Honduras has the highest rate of femicide—defined as the killing of a woman by a man because of her gender—in Latin America, the UN Economic Commission for Latin America and the Caribbean reports.

As of August 5, 174 femicides have been committed in Honduras in 2021 according to the Women's Rights Center, a Honduran nongovernmental organization. In 2013, Honduras reformed the penal code to recognize femicide as a crime.

Abortion is illegal in Honduras under all circumstances, with prison sentences of up to six years. The law also sanctions abortion providers. In January, legislators increased the majority needed to amend the provision banning abortion from two-thirds to three-quarters.

Girls and adolescents younger than 19 carry 15 percent of all pregnancies, the Monitoring Mechanism of the Belém do Pará Convention reported in 2016. Thirty-four percent of women ages 20 to 24 had married when they were 15 to 19, a UN Population Fund study conducted from 2005 to 2019 found.

Honduras’ fragile institutions fail to protect the rights of children, including adolescents, and ensure that they have access to basic services such as education and healthcare, the IACHR reported in 2019.

In 2019, more than 360,000 children between 5 and 17 years old worked, and only half of children under 18 years old attended school, according to the National Statistics Unit.

The Covid-19 pandemic has further limited access to education. Schools were closed in March 2020 and had not yet returned to full in-person classes by September 2021.

Child recruitment by gangs has caused many children to flee and abandon school. The average age of first contact with gangs is 13 years old, a 2020 UN Development Programme report found.

As of September, more than 20,000 people were detained in prisons with capacity for under 11,000. More than half of the men and two-thirds of the women were in pretrial detention, according to official statistics.

After 37 detainees were killed in a 2019 wave of gang violence, President Juan Orlando Hernández declared a state of emergency—extended to December 2021—and put prisons under military control. Assassinations and violence continue under military supervision. From January to June, the OV-UNAH documented eight violent deaths in prisons.

To reduce overcrowding in response to the pandemic, the legislature approved alternatives to pretrial detention and judges have released more than 1,600 people. However, many petitions for pandemic release have been rejected.

In February, the US announced suspension and planned termination of the “asylum cooperative agreement” signed with Honduras in 2019, whereby Honduras had agreed to receive non-Honduran asylum-seekers transferred from the US.

Several UN special rapporteurs and the Working Group on Enforced or Involuntary Disappearances warned, in April, of growing numbers of migrants from Honduras, Guatemala, and El Salvador who have disappeared in Mexico, including 741 Hondurans from March through August 2019. They called for implementation of protective measures.

Honduras voted in favor of an OAS resolution rejecting Venezuela’s December 2020 elections, which have been widely considered fraudulent. However, in June and October 2021 it abstained from OAS resolutions condemning arrests of Nicaraguan presidential opposition candidates and critics and demanding their release.

In July, the US released the “Engel List,” listing individuals from Honduras, El Salvador, and Guatemala allegedly associated with corruption and undemocratic acts. It named 21 from Honduras, including former President Porfirio Lobo Sosa (2010-2014), who became ineligible for visas and admission to the US.

In September, the OAS and Honduras signed an agreement to allow an OAS electoral observation mission to the November elections to elect president, legislators, and local authorities.

In October, Honduras was elected as a member of the UN Human Rights Council for the 2022-2024 term.