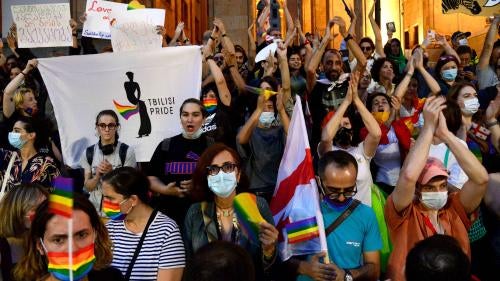 Correction (January 26, 2022): This chapter has been edited to correctly reflect the date of Alexandre Lashkarava’s death.

Setbacks in several areas of human rights occurred during 2021 against the backdrop of a dramatic political standoff between the ruling Georgian Dream (GD) and opposition parties that dominated much of the year in Georgia.

Lack of accountability for law enforcement abuses persisted. Other areas of concern included police interference in freedom of assembly, attacks against journalists and declining media freedom, institutionalization of children, violence against lesbian, gay, bisexual, and transgender (LGBT) people, and threats to labor safety.

In August, the European Union (EU) said Georgia failed to qualify for €75 million (approximately US$86 million) in assistance conditioned on judicial reforms.

After the October 2020 general elections, opposition parties boycotted their seats in parliament, alleging electoral fraud. In April, the EU mediated an agreement between the GD and opposition parties that ended the boycott, envisaged electoral and judicial reforms, and proposed early parliamentary elections if GD failed to garner 43 percent of votes in October 2021 municipal elections. This prompted the opposition to frame municipal elections as a “referendum” on holding snap parliamentary elections. GD abandoned the agreement in July, citing the refusal by the main opposition party, United National Movement (UNM) to sign it and ruling out snap polls.

GD won a significant majority in the municipal elections in October. The opposition rejected the results and called for street protests.

International observers, led by the Organization for Security and Co-operation in Europe (OSCE), found that the elections were competitive and “technically well-administered,” but “marred by allegations of pressure on voters, vote-buying and an unlevel playing field.” Following the run-offs later in October, they also said that “sharp imbalances in resources, and an undue advantage of incumbency further benefited the ruling party and tilted the playing field.”

On October 1, a day before the polls, police detained ex-President Mikheil Saakashvili after his return to Georgia following an eight-year absence. In 2018, a court convicted him in absentia on two counts of abuse of office and sentenced him to six years. The Interior Ministry launched an investigation into illegal border crossing in addition to two other pending charges. Saakashvili denied all charges and said they were politically motivated.

Police interfered with the right to freedom of assembly by preventing protesters from installing tents outside the parliament building in Tbilisi. In February, police arrested over 20 protesters on misdemeanor disobedience charges after law enforcement officers seized a tent, which led to skirmishes with the gathered activists.

On February 23, police stormed UNM’s headquarters to detain its leader, Nika Melia, over his failure to pay additional bail fees. Police used teargas, detained 21 people on disobedience charges, and seized computer servers. The Georgian Young Lawyers’ Association (GYLA), a leading nongovernmental group, said that the use of tear gas was disproportionate and criticized the police for failing to explain the grounds for seizing the computer hardware. Melia continued to face charges for inciting violence during 2019 protests in Tbilisi and refusing to pay increased bail after he discarded an ankle monitor during November 2020 rally.

GYLA also criticized the police use of misdemeanor disobedience charges to detain people protesting the raid as a means “to suppress peaceful protests.”

In April, the parliament rushed amendments to the code of administrative offenses, toughening penalties for petty hooliganism and police disobedience. The amendments doubled or tripled fines (up to approximately US$1,300), increased administrative detention from 7 to 15 days, and stripped the judicial discretion for more lenient sanctions for repeat offenders. Georgian human rights groups criticized the amendments as making “room for arbitrary use of repressive police mechanisms and sanctions.” They emphasized that court rulings on administrative offenses are often based solely on the testimonies of police officers and disregard fair trial norms.

In September, an anonymous source claiming to have worked for the state intelligence agency, leaked thousands of documents to media containing compromising information on Georgian clergy, including information on their intimate relationships, sexual orientation, or illegal drug use. The documents were gathered allegedly through illegal surveillance and wiretapping, The files also included conversations of Georgian journalists, opposition politicians, civil servants, and foreign diplomats. The prosecutor’s office launched an investigation into the leak.

Journalists and other media professionals endured numerous threats and attacks throughout 2021. In February, police arrested three people for assaulting Vakho Sanaia, an independent Formula TV anchor in Tbilisi. Sanaia said the assailants recognized him and shouted insults at him during the attack. In August, a court convicted the assailants and sentenced them to time served on remand.

Police appeared to be present but failed to prevent the violent incidents. (See below).

TV Pirveli cameramen Alexandre Lashkarava, who sustained facial bone fractures, a concussion, and contusions, and underwent surgery, was found dead in his apartment several days later. The day after Lshkarava was found, before the cause of death was fully established, the authorities publicly alleged he had died from a drug overdose, based on what they called “interim forensic results” of a blood test. No final forensic results have been issued at time of writing. Lashkarava’s family and civil society groups questioned the rushed findings. Police launched an investigation into incitement to suicide.

On July 22, the culture minister grabbed and confiscated the microphone from a journalist with the pro-opposition television channel, Mtavari Arkhi, in response to uncomfortable questions.

Organizers of Tbilisi Pride had to cancel the planned march on July 5 after far-right groups stormed their headquarters and attacked journalists. Mobs climbed onto the balcony of the Tbilisi Pride headquarters, broke windows, tore a rainbow flag, and ransacked the offices. They also attacked and injured over 50 journalists (see above) and broke into the offices of several nongovernmental groups that hid Pride organizers as violent mobs chased them throughout the city.

Instead of ensuring the safety and freedom of assembly of the Pride organizers and participants, the authorities appeared to blame them. Prime Minister Irakli Garibashvili said that it was “unreasonable” to hold the demonstration in a public place that could lead to “civil confrontation.” The Interior Ministry also warned against holding such marches in a public space. According to numerous media reports, police were present in small numbers and failed to effectively intervene. In the aftermath of the violent spree, police launched investigation and arrested at least 27 people for participating in organized violence. The ombudswoman criticized the authorities for failing to prosecute any of the organizers of the violence.

In March, authorities allowed the first-ever legal gender recognition for a transgender person, changing the gender marker from “male” to “female,” but only after she provided a medical certificate proving she had undergone surgery. Medical certification is required for transgender people to obtain legal gender recognition in Georgia. This represents a serious obstacle in the daily lives of transgender people, encouraging their marginalization, and raising unemployment and poverty risks.

In May, a foster care home in Ninotsminda for 56 children, including eight with disabilities, run by the Georgian Orthodox Church, drew media attention after the office of the ombudswoman was twice denied a monitoring visit, prompting the UN Committee on the Rights of the Child to issue an emergency temporary measure. The measure called on the authorities to immediately ensure state monitoring.

The ombudswoman publicized information about four ongoing criminal investigations related to physical and sexual abuse against children in the Ninotsminda institution. After a public outcry, in June, a court ruled to remove children with disabilities from the institution. State social workers facilitated the transfer of over 30 children, including children without disabilities. Over a dozen children remained there under close state scrutiny. The church also replaced the establishment’s director. The new director claimed to have dismissed over two dozen staff and expressed readiness to cooperate with the office of the ombudswoman.

In July, UNICEF hosted a two-day workshop with Georgian officials and all partners working on children’s rights to assist the government in developing an action plan for deinstitutionalization for children with and without disabilities residing in state and private institutions.

In July, a court ruled that forcibly separating children from families due to poverty is illegal. It ordered the government to pay GEL35,000 (US$11,000) in damages to each of three children who had been forcibly separated from their mothers two years earlier due to poverty, without the state first attempting to provide support to the family.

Schools were closed for 155 days, and partially closed to certain ages or in certain areas, for another 84 days since the pandemic’s start in 2020. UNICEF estimated that at least 50,000 children lost access to education when Georgia switched to online schooling. Many students faced barriers to accessing remote education, primarily due to limited internet access in mountainous regions, the lack of suitable electronic devices among families living in poverty, and the lack of teachers’ experience with online education.

Sweeping labor reforms came into effect on January 1, 2021, expanding the Labor Inspectorate’s mandate to monitor all labor standards and introducing new regulations for work hours, overtime, and time off.

Despite these reforms, fair labor conditions remain a persistent concern. Social protections are minimal, unions lack legal guarantees that would allow them to effectively bargain for systemic changes, and the Labor Inspectorate’s effectiveness has been hampered by a shortage of resources. A June report by the independent trade union Solidarity Network found that nurses earn less than a living wage.

Workplace safety also remains a persistent problem. According to the Labor Inspectorate, 20 workers died and 189 were injured in work-related accidents from January through September. App-based food delivery services, which boomed during the Covid-19 pandemic, emerged as a new battleground for workplace safety. In early 2021, more than 100 delivery couriers turned off their apps to protest unrealistic performance targets, which they said made their jobs more dangerous.

The EU, US, and Georgia’s other Western partners engaged throughout the year to assist in resolving the political crisis. European Council President Charles Michel mandated a Swedish diplomat, Christian Danielsson, to broker mediation efforts. (See above).

In February, the EU released its Association Implementation report, highlighting that Georgia broadly continued alignment to European standards, but noted challenges regarding the independence of the judiciary and the need for further electoral reforms.

In March, the EU-Georgia Association Council assessed the implementation of the Association Agreement. The EU urged Georgia to further implement the anti-discrimination law, ensure protection for minority groups, and safeguard gender equality. It also urged Georgia to continue efforts to create an effective labor inspectorate “to further improve working conditions.” During their human rights dialogue in July, the EU and Georgia condemned the violent attacks leading to the cancellation of the Pride march, and Georgia committed to investigate such attacks.

In February, following opposition leader Nika Melia’s detention, the US embassy expressed regret that the authorities ignored international partners’ call for restraint and dialogue and the EU stated that the political polarization following his arrest undermines Georgia’s democracy.

The International Criminal Court continued its investigation into war crimes and crimes against humanity committed during the August 2008 Russia-Georgia war over South Ossetia.

This chapter has been edited to correctly reflect the date of Alexandre Lashkarava’s death.