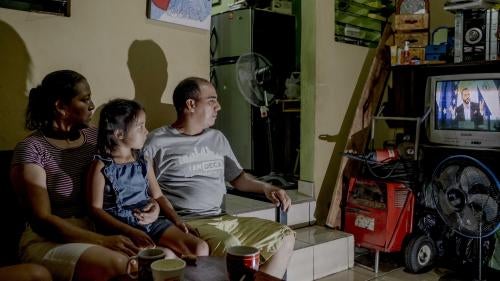 In 2021, President Nayib Bukele and his allies in the legislature undermined basic democratic checks and balances, including by summarily dismissing and replacing Supreme Court judges they disagreed with and passing laws to dismiss hundreds of lower-level judges and prosecutors.

In September, the Constitutional Chamber of the Supreme Court allowed President Bukele to run for re-election, despite a constitutional prohibition on immediate re-election.

President Bukele’s government has indicated he plans to introduce a proposal to reform the constitution, including by extending the presidential term from five to six years and overhauling some democratic institutions.

Gangs continue to exercise territorial control over some neighborhoods and extort residents throughout the country. They forcibly recruit children and sexually abuse women, girls, and lesbian, gay, bisexual, and transgender (LGBT) people. Gangs kill, disappear, rape, or displace those who resist.

From 2011 to October 2020, 71,500 people were internally displaced, mostly due to violence perpetuated by gangs and security forces, according to the Office of the United Nations High Commissioner for Refugees.

Girls and women accused of having abortions have been imprisoned for homicide and aggravated homicide. LGBT individuals face discrimination and police violence.

During the campaign for the February 2021 parliamentary elections, President Bukele repeatedly accused members of the Supreme Electoral Court of organizing a “fraud,” with no evidence.

President Bukele’s party won the elections, obtaining a two-thirds majority. On May 1, the day his supporters were seated in the National Assembly, they summarily removed and replaced all five judges of the Supreme Court’s Constitutional Chamber, as well as the attorney general.

In late June, the Legislative Assembly appointed five new judges to the Supreme Court, in violation of the process established in the constitution. The Assembly had appointed 10 of a total 15 Supreme Court judges by September, although Salvadorean law only allows each newly constituted legislature to appoint five.

On August 31, lawmakers passed two laws dismissing all judges and prosecutors over 60 years of age or with 30 or more years of service, allowing the Supreme Court and the attorney general to grant exceptions extending their terms “due to reasons of necessity or specialty.” The law affects one-third of all judges.

President Bukele continued using the military in public security operations, although the 1992 peace accord bars it. In February 2020, President Bukele entered the Legislative Assembly with armed soldiers in an apparent effort to intimidate legislators into approving a loan for the security forces. Between March and May 2020, the police arbitrarily detained individuals accused of violating Covid-19 measures.

In November 2020, during an investigation into allegedly irregular purchases related to Covid-19, police blocked prosecutors from executing a court order to raid the offices of the Health Ministry.

Between 2015 and 2020, the police committed 179 extrajudicial killings, the Ombudsperson’s Office reported. Twenty-five resulted in convictions.

Prisons held over 36,600 detainees in March, twice the official capacity, the World Prison Brief revealed. Approximately 23 percent of inmates were in pretrial detention.

Overcrowding and poor sanitation endangered the health of prisoners and risked accelerating the spread of Covid-19.

Approximately 60,000 gang members operate in El Salvador, media report. They exert control over parts of the territory and commit serious abuses, including killings and rape.

According to media reports, numerous security and elected officials have collaborated with gangs in criminal operations, and many political parties have negotiated with the groups, including in exchange for gang members’ support during elections.

In August 2021, the digital outlet El Faro reported that Attorney General Raúl Melara had been investigating alleged negotiations between the government and the country’s three largest gangs prior to his removal on May 1. According to the article, the government had offered jail privileges to imprisoned gang members and increased employment opportunities for members outside of prison in exchange for the gang’s commitment to lower homicide rates.

The National Police reported 1,322 homicides from January to December 2020, compared to more than 2,398 during the same period in 2019, a 46 percent drop. Homicide data for 2021 had not been published at time of writing.

From January 2014 to November 2020, authorities reported more than 13,000 disappearance victims (including more than 400 children)—which exceeds the estimated 8,000 to 10,000 disappeared during the civil war (1979-1992). Disappearances are committed by a range of actors, including gangs and the police. Few cases are investigated.

Impunity for government abuses is the norm.

A trial of former military commanders accused in the 1981 El Mozote massacre started in 2016 and continued at time of writing. Soldiers committed mass rape and killed 978 civilians at El Mozote, including 553 children. In September 2020, soldiers—with President Bukele’s backing—refused to comply with a court order that allowed a judge to review military records about the massacre. In September 2021, Jorge Guzmán, the judge investigating the massacre, was ousted because he was over 60 years of age. His removal is likely to cause further delays in the trial.

Between March and June 2020, the Access to Public Information Agency, charged with implementing the Access to Public Information Law, suspended all hearings and processes, invoking the Covid-19 state of emergency. The decision undermined access to information of public interest. In May, legislators granted government officials and contractors “immunity” from criminal and administrative charges related to Covid-19 policies, including acquisition of medical supplies and services. In October, the Assembly reformed the law to “clarify” that the “immunity” would not cover “corruption,” “bribing,” or any “similar crimes.” At the time of his removal also in May, Attorney General Melara was investigating six government officials, including the health minister, for alleged corruption and improper emergency purchases related to Covid-19.

In June, the Attorney General’s Office ended a cooperation agreement with the International Commission Against Impunity in El Salvador (CICIES), a body backed by the Organization of American States (OAS) to fight corruption. CICIES had been investigating alleged irregularities in emergency purchases related to Covid-19.

Abortion is illegal under all circumstances. Women face two to eight years in prison for having an abortion. Providers face prison sentences of 6 months to 12 years.

In September, President Bukele said that the government-backed constitutional reform would not help ease the country’s prohibition on abortion.

El Salvador’s legislative framework remains inconsistent with international disability rights law, with restrictions on legal capacity for people with intellectual and psychosocial disabilities, as well as insufficient measures to improve physical and communication accessibility. Criminal gangs have attacked women and girls with disabilities, with high levels of impunity.

LGBT people remain targets of homophobic and transphobic violence by police, gangs, and the general public. In many cases, LGBT people flee persecution at home, including to the United States. Salvadorean authorities, which in 2017 acknowledged anti-LGBT violence committed by public security officials, reported 692 cases of violence against LGBT and intersex people from January 2015 to June 2019.

El Salvador does not have comprehensive civil non-discrimination legislation that covers discrimination on the basis of sexual orientation and gender identity, nor a legal gender recognition procedure for transgender people. In September, President Bukele said that the government-backed constitutional reform would not legally recognize same-sex relationships.

The Association of Journalists of El Salvador (APES) reported 173 press freedom violations between January and August 2021, including attacks, digital harassment, and restrictions on journalists’ work and access to public information.

In September 2020, a few weeks after El Faro reported that President Bukele had negotiated with MS-13, the president announced criminal investigations accusing the newspaper of “money laundering” and “tax evasion.” El Faro has also been subject to tax audits that appear selective and abusive.

Since taking office, President Bukele has undermined the credibility of independent media outlets, accusing them of spreading “fake news” or serving political interests. In June, the security minister said authorities “were following” journalists he had accused, without providing any evidence, of “advocating for the commission of crime.” In October, Vice President Félix Ulloa said that “some journalists should be prosecuted on slander and defamation charges” for criticizing the government.

In July, immigration authorities denied Daniel Lizárraga, a Mexican journalist working for El Faro, a work permit. According to media reports, police interrogated Lizárraga prior to his appointment at the immigration office, asking whether he intended to “report on political issues.” He did not attend the appointment because, he told authorities, he had been exposed to Covid-19. A day later, he was expelled from the country.

During fiscal year 2021, the US appropriated over US$65 million in bilateral aid to El Salvador, particularly to reduce extreme violence and strengthen state institutions. In May, in response to growing concerns “about transparency and accountability,” the US Agency for International Development redirected assistance away from the National Police and the Institute for Access to Public Information, toward civil society and human rights groups.

Between July and September, the administration of US President Joe Biden included 19 Salvadorans—including President Bukele’s legal advisor and his cabinet chief, and all of the judges of the Constitutional Chamber—on the “Engel List” of individuals identified as having engaged in “significant corruption.”

More than 178,000 Salvadorans were seeking asylum in other countries at the end of 2019, mostly in the United States. In fiscal year 2019, the last year data is available for, the US granted asylum to 3,212 Salvadorans—the third highest nationality ranking for asylum grants in the US. From 2013 through 2019, 138 Salvadorans were killed following deportation from the US; more than 70 were beaten, sexually assaulted, extorted, or tortured.

In May, UN Secretary-General António Guterres flagged continuing concerns about “the procedures used in the removal of the members of the constitutional chamber of the Supreme Court of Justice and its impact on the control mechanisms in El Salvador,” and urged the government to "respect constitutional provisions, rule of law and separation of powers.”

Also in May, UN High Commissioner for Human Rights Michelle Bachelet expressed concern about the “the decision by El Salvador’s Legislative Assembly to dismiss the magistrates of the Constitutional Chamber of the Supreme Court of Justice and the Attorney General” as this “seriously undermines democracy and the rule of law in the country.” Similarly, the OAS Secretariat “reject[ed]” these dismissals.

In February, the Inter-American Commission on Human Rights granted precautionary measures to 34 members of El Faro, considering that they were facing “alleged harassment, intimidation, threats and stigmatization ... related to the exercise of their freedom of expression in matters of public interest to their country.”