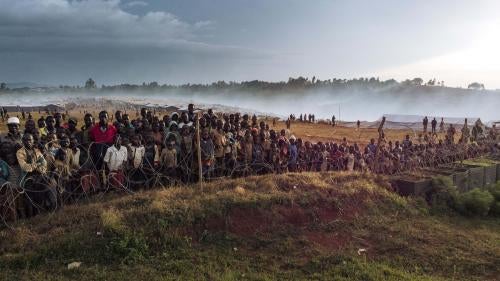 The collapse of President Felix Tshisekedi’s alliance with former President Joseph Kabila’s coalition in December 2020 created new opportunities to push forward with stalled reform efforts, but progress on systemic reforms and improvements in the human rights and humanitarian situations were limited.

In eastern Congo, fighters from armed groups, and in some cases government security forces, carried out massacres, kidnappings, sexual violence, recruitment of children, and other attacks on civilians with near total impunity.

To address insecurity in the east, the president in May 2021 imposed military rule in North Kivu and Ituri, two of the provinces worst affected by violence. Some officers with records of abuse remained in command positions. Martial law and new military operations did not improve civilian protection. Attacks on civilians by armed groups and government forces continued, with more than 1,600 people killed between May and the end of the year across Ituri and North Kivu. The Allied Democratic Forces (ADF), an Islamist armed group led by Ugandans, have been allegedly responsible for more than half the killings. In December, Ugandan troops crossed into eastern Congo to begin joint military operations with the Congolese army against the ADF.

In 2021, the authorities often cracked down on dissenting voices, including human rights and democracy activists, journalists, and peaceful protesters. Tensions escalated in the capital, Kinshasa, with the establishment of a controversial new electoral commission, due to alleged political interference, and debates over a proposed new law, known as the “Congolité Bill,” that would ban Congolese citizens with a parent of foreign origin from higher office. Supporters of Tshisekedi’s Union for Democracy and Social Progress (UDPS) party physically attacked Catholic churches and priests for their role in pushing for a more independent electoral commission president.

Over 5 million people were internally displaced. One in three people suffered from acute hunger. School closures due to the Covid-19 pandemic affected 19.2 million children. After the pandemic’s start in 2020, schools were fully or partially closed for 179 days, including several weeks in early 2021.

Journalists, activists, whistleblowers, and critics of government policies were intimidated and threatened, beaten, arrested, and in some cases prosecuted by the authorities and security forces.

In January, a military court acquitted eight members of Lucha (Lutte pour le Changement, Struggle for Change), a citizens’ movement, after they spent a month in detention for peacefully marching in Beni territory. In July, two other members, Elisée Lwatumba and Eric Muhindo, who had been detained for three months following a peaceful march in Butembo, were provisionally released. Authorities arrested Parfait Muhani and Ghislain Muhiwa, also members of Lucha, in July and August respectively. They were both detained at Goma’s central prison before being released on bail on November 6. Their trial on criminal defamation and criminal association charges started on November 5 after their group denounced misappropriation of aid allegedly involving staff from Congo’s first lady’s foundation. Thirteen other Lucha activists were arrested in Beni on November 11 during a peaceful demonstration against martial law, and remained in detention at time of writing.

In late February, it was revealed that authorities had sentenced whistleblowers Gradi Koko and Navy Malela to death in absentia in September 2020. The two former bank employees exposed alleged illegal financial practices and money laundering. In July, exiled anti-corruption whistleblower Jean-Jacques Lumumba faced threats and intimidation in Europe and Kinshasa.

Jacky Ndala, a youth leader for the political party Ensemble pour la République (Together for the Republic), was sentenced on appeal to 22 months in prison for “incitement to civil disobedience” after publicly opposing the discriminatory “Congolité Bill.”

Authorities also banned demonstrations, while security forces used excessive force to break them up. In April, police killed five people and wounded at least eight others during peaceful protests in Goma, Butembo, and Beni territory. Following the protests, security forces and violent mobs in Nyiragongo territory, North Kivu, killed at least 10 people and injured at least 50 others.

On April 29, dozens of students calling for peace were violently accosted and rounded up by police forces in Beni. Tshisekedi later apologized to all children involved, but only after he appointed the police commander in charge of the round-up, François Kabeya, as mayor of Goma.

Around  were active in eastern Congo’s Ituri, North Kivu, South Kivu, and Tanganyika provinces. Many of their commanders have been implicated in war crimes, including massacres, sexual violence against women and girls, forced recruitment of children, and pillage.

Various armed personnel, some unidentified, killed at least 2,347 civilians in South Kivu, North Kivu, and Ituri provinces, according to data collected by the Kivu Security Tracker, which documents violence in eastern Congo. This includes at least 268 civilians killed by Congolese security forces.

On February 22, armed assailants ambushed a World Food Programme (WFP) convoy on the road north of Goma, killing one Congolese driver and the Italian ambassador to Congo as well as his bodyguard. In June, UN experts said they could not establish the identity of the attackers, and that national and international investigations were ongoing.

In July, the Tshisekedi administration launched a new Disarmament, Demobilization, Community Recovery, and Stabilization program. However, many Congolese activists publicly raised concerns over the appointment of the program’s coordinator, Tommy Tambwe, a former leader of major Rwandan-backed rebel groups that have been responsible for countless abuses over the past 25 years.

In January, French authorities arrested former Congolese rebel leader Roger Lumbala on charges of participating in a group formed to plan crimes against humanity and complicity in crimes against humanity. The investigation focuses on abuses featured in the 2010 UN Mapping Report, which documented the most serious crimes committed across Congo between 1993 and 2003.

In February, at least 67 ethnic Iyeke were killed and more than 1,200 houses burned by ethnic Nkundo villagers, across a dozen villages sitting on the edge of the Salonga National Park in the western Tshuapa province. Although four suspects were arrested, the investigation into the killings made no progress.

In March, the International Criminal Court’s appeals chamber confirmed the conviction and sentence of Bosco Ntaganda, a former rebel leader and subsequently general in the Congolese army, to 30 years in prison on 18 counts of war crimes and crimes against humanity.

Starting in May, civilians in North Kivu and Ituri, both under martial law, were prosecuted for criminal offenses before military courts, contrary to principles of the African Commission on Human and Peoples’ Rights.

In August, the Tshisekedi administration established a commission tasked with delivering a roadmap for transitional justice, but it has yet to fully commit to ending impunity for serious crimes. Military courts and other tribunals adjudicating cases of war crimes and crimes against humanity have made little progress in filling the wide accountability gap in the country. These cases continue to highlight severe shortcomings in the domestic justice system.

The trial, which opened in 2017, continued for the murders of United Nations investigators Michael Sharp and Zaida Catalán, and the disappearance of their three Congolese moto drivers and their interpreter. In September 2021, human rights organizations and foreign diplomats denounced the arrest of Congolese journalist Sosthène Kambidi, who was interrogated over the origin of a video showing the killing of the two investigators. Kambidi was granted conditional release on October 12.

The trial for the December 2018 Yumbi killings in the country’s west, in which at least 535 people were killed, started before a military court in May 2021 but little progress was made.

Following revelations by international media, authorities made several arrests linked to the 2010 murder of prominent human rights defender Floribert Chebeya and his driver Fidèle Bazana. A new trial began in September 2021 for defendants Christian Kenga Kenga and Jacques Mugabo, both senior police officers. Meanwhile, Gen. John Numbi, who was also implicated in the double murder, reportedly fled Congo and was officially declared a deserter in June.

The trial of 10 inmates for the September 2020 prison riot at Kasapa Central Prison in Lubumbashi opened on October 28. During three days of violence, inmates repeatedly raped several dozen female detainees, including a teenage girl. The defendants were charged with arson, rape of a minor, rape with violence and attempted escape. Officials who ignored repeated warnings of the impending riot had not been investigated at time of writing.

Gédéon Kyungu, a notorious warlord responsible for atrocities in the southern region of Katanga who escaped from house arrest in Lubumbashi in March 2020 remained at large at time of writing.

Militia leader Guidon Shimiray Mwissa, wanted by Congolese authorities since 2019 for serious crimes, including rape and child soldier recruitment, remained active in North Kivu, commanding a faction of the Nduma Defense of Congo-Rénové (NDC-R). The Congolese army used a separate faction of the NDC-R, led by Gilbert Bwira, as a proxy to fight other armed groups, UN experts said in June. Bwira was eventually arrested in October.

In November, the authorities opened an inquiry following allegations of high-level corruption reported by a consortium of media and international groups which went through 3.5 million leaked documents. The “Congo Hold-Up” findings alleged corruption under former President Kabila.

Congo contains the world’s second largest rainforest. Scientists estimate that the forest’s soil alone holds billions of tons of carbon, as much as 20 years’ worth of the fossil fuel emissions of the United States. If released through increased deforestation or other disturbances it could have catastrophic effects on efforts to contain climate change.

Successive governments continued to grant multiple logging contracts, despite imposing a moratorium on new logging concessions in 2002. In February, civil society organizations filed a lawsuit against the former environment minister for reportedly breaching the prohibition by granting logging concessions to Chinese companies in 2020.

In April, President Tshisekedi pledged to restore forest cover to 63 percent by 2030 at a climate summit hosted by the US.

During the same month, a bill that would recognize Indigenous peoples’ rights over their traditional territories was adopted in the National Assembly but it had yet to be voted by the Senate before it could be passed into law. Ending the moratorium on logging without a domestic legal framework that protects Indigenous rights could undermine communities’ access to their forests, as they would have little recourse against businesses that claimed them.

In January 2021, the UN Human Rights Committee, which monitors state compliance with the International Covenant on Civil and Political Rights, found that Congo violated the right to life of human rights defender Pascal Kabungulu, who was killed in an extrajudicial execution, in front of his family in 2005.

An independent commission, prompted by reporting of investigative journalists, found in September that more than 80 aid workers, including some employed by the World Health Organization, were involved in sexual abuse and exploitation of dozens of women during an Ebola outbreak in Congo between 2018 and 2020.

In October, the UN Human Rights Council decided to renew the mandate of the Team of International Experts on the situation in the Kasai and to extend its mandate to cover the entire country.