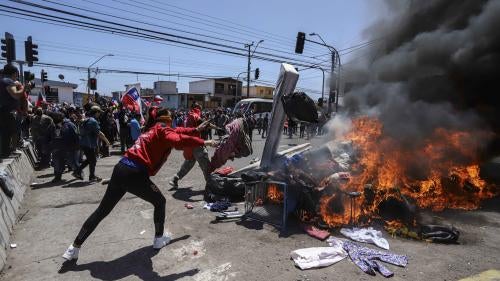 Chile has taken initial steps to reform the national police, the Carabineros, prompted by complaints of serious abuses against protesters in 2019. Substantial changes to the police disciplinary system and protocols are still needed.

In October 2020, Chileans voted to establish a convention to write a new constitution. Members began work in July 2021 and have a year to present a new text, which is to be submitted to popular plebiscite.

Hundreds of complaints of use of excessive force against protesters and ill-treatment of detainees since 2019 have prompted efforts to reform the police.

The Chilean National Human Rights Institute (INDH) reported 460 cases of eye injuries allegedly caused by police from October 2019 through March 2020. The Salvador Hospital in Santiago reported treating 182 cases of ocular trauma caused by kinetic impact projectiles that appeared to have been fired by police anti-riot guns between October and November 2019.

In November 2019, at Human Rights Watch’s recommendation, the Carabineros temporarily suspended the use of anti-riot shotguns—which use less lethal ammunition— except when there was risk to life. In July 2020, however, the Carabineros updated its protocol on these shotguns in a way that leaves ample room for abuse. The protocol says their use should be “preferably,” but not exclusively, defensive; it also allows the use of shotguns in defense of police stations, which could include when protesters throw rocks at a police building. The protocol does not specify what type of less lethal ammunition may be used, thus allowing the same type of kinetic impact projectiles that caused hundreds of eye injuries in 2019 and 2020; does not say at what distance from protesters police should shoot; and in some circumstances even allows shooting anywhere on the body.

In January 2020, the Carabineros adopted a protocol on body cameras that gives officers complete control to start and stop recording. It requires them to start recording right before they open fire with an anti-riot shotgun, meaning they would not record a video of the prior situation, which could show whether the use of force was permissible or not. The protocol also establishes that recordings are to be kept secret, even from victims of excessive police force, unless prosecutors or judges request access within a short 30-day period, after which most recordings will be deleted.

The Ministry of Interior has met with nongovernmental organizations (NGOs), experts, and the Carabineros to discuss amending police protocols, including a 2019 protocol that allows the police to add teargas to water cannons without having previously performed a public study on its health impact.

The government has also introduced several police reform bills that would increase oversight and transparency but do not overhaul the Carabineros’ disciplinary regime, which does not guarantee independent and impartial investigations.

The Attorney General’s Office launched 8,581 investigations on alleged police abuses committed from October 2019 to March 2020. By January 2021, it had closed more than 35 percent of them without pressing charges. As of September, only five Carabineros had been convicted, the National Human Rights Institute reported.

Carabineros opened 1,433 administrative investigations for involvement “in acts of violence,” which resulted in 158 disciplinary punishments, including the firing of 22 police officers, it said in July. Carabineros said it is considering firing another 21 officers.

Chilean courts continue to try agents of Augusto Pinochet’s dictatorship (1973-1990) for human rights abuses. In January 2021, four former military officers and a former police officer were convicted and sentenced to 15 years in prison for two murders and five attempted murders of detainees poisoned in 1981, which the court considered part of a “systematic” policy of repression and crimes against humanity.

In April 2021, Congress passed a new immigration law that allows authorities to issue deportation orders without hearing migrants or giving them the chance to present evidence. Although the law decriminalizes undocumented entry into the country, it allows for the immediate expulsion of migrants who crossed the border or were trying to cross the border, raising concerns about due process. Some of the law’s provisions have already entered into effect, while others require the Ministry of Interior to issue regulations.

From January through April, the government had deported 294 people, most without judicial review, and announced plans to deport a total of 1,500 by year’s end.

A series of rulings by Chile’s Supreme Court and appeal courts have ordered authorities to stop hundreds of deportations. The rulings have exposed violations of due process in deportations.

Most people deported in 2021, up to October, were Venezuelans. More than 457,000 Venezuelans are estimated to be living in Chile, most with legal status. But migration policies since 2019 have made it increasingly difficult for Venezuelans to obtain visas or asylum. Chile only granted refugee status to 3 Venezuelans, out of 325 applications, in 2020, and to 4 out of 987 in 2021, as of September. The relatively low number of applications appears to be the result of obstacles to apply and border closures.

From January through November 10, 20 migrants had died crossing the high-altitude border from Bolivia to Chile.

In September, Carabineros evicted Venezuelans from a square in the northern city of Iquique, during which there were some acts of violence. The next day, anti-migrant protesters burned personal belongings of Venezuelans living in the streets.

Chile’s 28-year total abortion ban ended in 2017, when the Constitutional Court upheld a law decriminalizing abortion when the life of a pregnant woman is at risk, the fetus is unviable, or a pregnancy results from rape.

However, people seeking safe and legal abortions continue to face multiple barriers. The latest government data available, from 2019, shows that 18 percent of obstetricians in public hospitals refuse to perform abortions when the life of a woman is at risk; 25 percent when the fetus is unviable; and almost 50 percent in cases of rape.

In November 2021, the House of Representatives rejected a bill to decriminalize abortion until the 14th week of pregnancy.

According to the coalition of NGOs Mesa de Acción por el Aborto, the public health system restricted access to comprehensive sexual and reproductive health services like pap tests, mammograms, and medical care for sexually transmitted infections for some periods of the pandemic, but resumed providing them at the beginning of 2021.

Thirty-three women and girls were victims of femicide from January through mid-September 2021, the NGO Women’s Network Against Violence Against Women reported. Legislation in 2020 expanded the definition of femicide to a killing committed for “gender motives,” without requiring a relationship between the perpetrator and the victim, as was previously the case.

In May 2021, 1.2 million Indigenous voters selected representatives for 17 seats at the constitutional convention reserved for Indigenous people.

In July, the constitutional convention chose as its president Elisa Loncón of the Mapuche people, the largest Indigenous group in Chile, with more than 1 million members.

Indigenous movements want the new constitution to recognize Indigenous peoples as nations within a plurinational Chile, as well as their rights to land and resources.

Long-standing conflict between the government and some Mapuche land-rights activists in the south continues. In October, a former Carabinero colonel was found guilty of killing a 17-year-old Mapuche boy, almost two decades after the death had taken place.

In December 2021, Congress approved a bill, prioritized by President Piñera, which legalizes marriage between same-sex couples and also recognizes rights enjoyed by heterosexual couples, like the right to adopt children.

In August, a law eliminating "homosexual conduct" as grounds for divorce came into effect.

In August 2021, a judge presented before the Senate commission on children’s rights complaints of sexual exploitation and human rights violations in a shelter for children separated from their families run by the National Service for Minors (SENAME) in Santiago.

In October, a new National Specialized Protection Service for Children and Adolescents took over SENAME’s child protection programs. A pending bill would also create a new agency to handle children in conflict with the law, replacing SENAME. Human rights organizations have raised concerns that, despite institutional changes, substantial reform to improve care for children is lacking.

More than 80 percent of Chileans were fully vaccinated against Covid-19 as of November 8, 2021, one of the highest rates in the world.

In March 2020, schools closed to curb the spread of the Covid-19 virus, affecting 3.5 million students. The Ministry of Education provided educational content through an online platform, but acknowledged that only 27 percent of low-income students had access to online education. In-person education resumed in July 2021, although, as of October, attendance was not mandatory and remained low.

Chile’s civil code uses derogatory language about people with disabilities and in many cases strips them of their legal capacity, including by providing for full guardianship of them.

The government has not updated data about the number of people with disabilities since 2015.

Overcrowding in some detention centers and prison violence endangered Chile’s detainee population of 39,000 as of October 31, 2021. Homicides in prisons increased by 75 percent from 2017 through 2020, the Attorney General's Office said in September 2021.

In May, the government reported that around 1,800 detainees belonging to groups at higher risk from Covid-19 had been granted house arrest based on an April 2020 law.

The number of pretrial detainees has increased by about a third since 2012. As of August, 37 percent of detainees were awaiting trial. Chile’s criminal code allows pretrial detention in broad circumstances and does not establish a maximum period for detention.

In November 2020, the Constitutional Court ruled unconstitutional a bill passed by the House of Representatives to criminalize speech of people who “justify,” “approve of,” or “deny” human rights violations during the dictatorship, finding it violated the freedom to express opinions without prior censorship. The Senate then had to drop the bill.

In April 2021, the UN Committee on the Protection of the Rights of All Migrant Workers and Members of Their Families expressed concern that Chile had expelled migrants en masse in February, failing to examine each case and making appeals materially impossible.

Chile strongly criticized abuses by the Nicolás Maduro government in Venezuela and, with other members of the Lima Group, a group of Latin American countries calling to restore democracy in Venezuela, refused to recognize the flawed legislative elections of December 2020.

Chile denounced arbitrary detention of presidential candidates, students, and members of civil society organizations in Nicaragua, and called for free and fair elections there.

President Piñera committed, in August, to receiving 10 Afghan women with their families in the context of the crisis affecting their country. The Foreign Ministry told the press it was working to receive up to 300 Afghans.