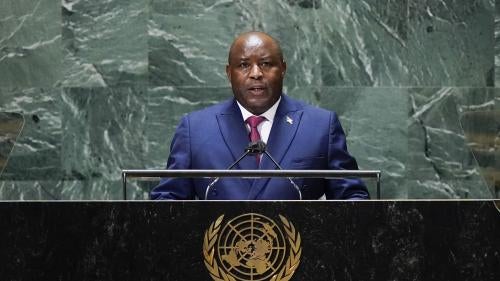 Since President Évariste Ndayishimiye came to power in June 2020, there have been limited improvements in Burundi’s human rights situation. His administration released four journalists and two human rights defenders, jailed on baseless charges. The authorities lifted some restrictions on media and civil society, while promises were made to rein in the ruling party’s youth league, the Imbonerakure.

However, many of Ndayishimiye’s repeated promises to deliver justice and promote political tolerance remain unfulfilled. The president has appointed ruling party hardliners to key positions. Sanctions against the prime minister and other individuals were lifted by the United States in November. The minister of interior, community development, and public security remains under European Union targeted sanctions. Killings, disappearances, torture, ill-treatment, arbitrary arrests and detention, and sexual and gender-based violence were documented by international and Burundian rights groups. Unidentified dead bodies, often mutilated or tied up, were regularly found in different parts of the country, often buried by local authorities, Imbonerakure members, or police, without investigation.

Ndayishimiye has shown greater openness than his predecessor toward the international community. In February 2021, the Burundian government and representatives of the European Union and its member states resumed a political dialogue, on hold since 2016. The Burundian government has produced a technical roadmap regarding human rights and other reforms, but it is vague and noncommittal and avoids addressing impunity for the many crimes committed since 2015.

Since August 2020, there have been several reports of security incidents involving clashes between security forces and armed groups, as well as attacks by unidentified assailants. Attacks by armed groups were reported in Cibitoke and other provinces bordering the Democratic Republic of Congo. In some of these attacks, Imbonerakure members supported the national army. Groups of unidentified armed men are also reported to be responsible for random attacks resulting in civilian casualties. The Burundian authorities denounced these as “terrorist” or “criminal” acts and committed abuses against alleged perpetrators and civilians.

According to the report of the Commission of Inquiry on Human Rights in Burundi, men suspected of belonging to, or assisting, armed groups were executed by police or national intelligence agents throughout 2021. Dozens of real or suspected members of opposition groups have been victims of enforced disappearances. Many people were also detained by the National Intelligence Service and allegedly subjected to severe torture, rape, and ill-treatment.

Local and international monitoring groups, including Human Rights Watch, documented cases of torture of people suspected of collaborating with armed groups. The Commission of Inquiry on Burundi documented cases where victims died in detention.

Despite a lull in abuses against opposition members after the May 2020 elections, killings, disappearances, torture, arbitrary detention, and harassment of those perceived to oppose the government continued throughout 2021. There have been limited attempts by authorities to rein in the Imbonerakure. Some members were prosecuted, although rarely because of serious criminal offenses, in trials that often lacked transparency. Fabien Banciryanino, a former member of parliament and outspoken human rights advocate was convicted of abusive security-related charges on May 7 and sentenced to a year in prison and a fine of 100,000 Burundian Francs (US$51). He was released after time served on October 1.

On March 5, a presidential decree announced the pardon or early release of more than 5,000 prisoners. However, the decree excluded many prisoners in pre-trial detention or accused of security-related offenses, many of whom were arrested in the aftermath of protests over the former President Pierre Nkurunziza’s 2015 bid for a third term and are held on political grounds.

Many members of civil society or journalists who fled in 2015 remain in exile. During former President Nkurunziza’s third and final term, independent civil society and media were relentlessly attacked, and their members killed, disappeared, jailed, and threatened.

Although Ndayishmiye’s government has lifted some restrictions, including the suspension of the anti-corruption organization PARCEM (Parole et Action pour le Réveil des Consciences et l’Évolution des Mentalités), the authorities continue to exercise undue interference in and oversight over the operations of civil society and the media.

Since Ndayishimiye’s election, several unfairly imprisoned journalists and human rights defenders were released. Four journalists working for Iwacu, the popular news website, were pardoned and released on December 24, 2020. Their pardon does not acquit them of the politically motivated conviction for complicity in an “impossible attempt” to undermine the internal security of the state.

Nestor Nibitanga, a human rights defender arrested in November 2017 and convicted on security charges, was pardoned and released on April 27. The conviction of Germain Rukuki, a member of ACAT-Burundi, arrested in July 2017 and sentenced to 32 years in prison in April 2018 for “rebellion,” “threatening state security,” “participation in an insurrectional movement,” and “attacks on the head of state,” was overturned on appeal in June. Rukuki was released on June 21, the same day the EU’s head of delegation announced that the process of lifting sanctions on Burundi had been initiated.

Despite these welcome releases, the space for civil society and the media to operate remains severely restricted. A lawyer and former human rights defender, Tony Germain Nkina, was sentenced to five years in prison in June, likely due to his past human rights work. On September 29, his conviction was maintained on appeal. On February 2, Burundi’s Supreme Court published the guilty verdict—dated June 23, 2020—in the case against 34 people accused of participating in a May 2015 coup attempt, including 12 human rights defenders and journalists in exile. After a trial, during which the defendants were absent and did not have legal representation, the group was found guilty of “attacks on the authority of the State,” “assassinations,” and “destruction.”

On February 11, the CNC lifted the ban on public comments on Iwacu, which had been in place since April 2018, and pledged to restore access to the website in Burundi. On February 22, the CNC lifted the ban on Bonesha FM, which was required to sign an agreement similar to one the private radio station Isanganiro and Rema FM, a pro-ruling party station, signed when they resumed broadcasts in February 2016. On April 21, the CNC authorized several new radio and television channels to begin operating. However, international media are still restricted, and the BBC and the Voice of America remain suspended since 2018.

Burundi punishes consensual same-sex sexual relations between adults with up to two years in prison under Article 567 of the penal code.

Burundian authorities have repeatedly spoken of the need for refugees to return from exile. As of September 30, 269,330 Burundians officially remain refugees in neighboring countries with over 170,000 Burundian refugees being repatriated under the tripartite voluntary repatriation program launched in 2017. Human Rights Watch has documented how Tanzanian authorities have forced or coerced refugees into signing for “voluntary” repatriations.

In its September 2021 report, the Commission of Inquiry on Burundi said that although the climate of hostility toward returnees had abated under Ndayishimiye, some who had been politically active in the past have been accused of collaborating with armed groups, arbitrarily arrested and detained, and tortured in detention. Some refugees who had returned fled Burundi again during 2021 for fear of being targeted. A group of eight Burundian refugees who were tortured and forcibly returned to Burundi by Tanzanian security officials were acquitted of security-related charges in August. At time of writing, the prosecution has appealed the verdict.

Although the government’s response to the Covid-19 pandemic was initially marked by repression and misinformation, since Ndayishimiye came to power, the authorities have taken steps to curb the spread of Covid-19. In July, the government announced that it would begin vaccinating the population, and the vaccination program began in October.

Cooperation with the World Health Organization (WHO) resumed with the arrival of its new representative in April 2021. In 2020, Nkurunziza’s government had refused to follow WHO guidelines to prevent the spread of the virus and declared the WHO’s country director and three of its experts persona non grata.

Despite these findings, the EU tabled a resolution at the September session of the UN Human Rights Council, adopted by a vote, which ended the mandate of the commission and instead created a special rapporteur mandate. Burundian authorities announced that they would not cooperate with even this more limited mandate and continue to refuse to cooperate with other international or regional human rights mechanisms.

In 2021, the EU and the Burundi government proceeded to hold several rounds of a political dialogue aimed at developing a “roadmap” for reforms, as the government presses the EU to lift its 2016 suspension of direct budgetary support. Although the government has yet to meet many of the benchmarks set by the EU in 2016, including those relating to media and civil society, in June, the EU’s head of delegation announced that the process to lift the measures had been initiated.