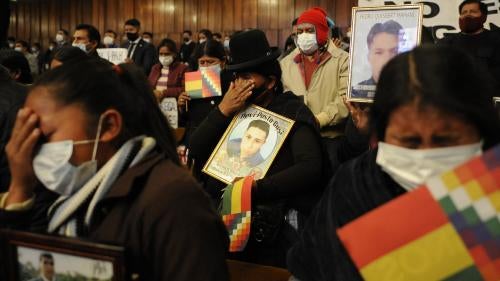 Political interference has plagued Bolivia’s justice system for years. The Jeanine Áñez government (November 2019-2020) pursued baseless charges against political opponents. The Luis Arce government (November 2020 to date) supports unsubstantiated and excessive charges of terrorism and genocide against former President Áñez, and in February 2021, issued an amnesty for crimes related to the country’s 2019 political crisis that appeared designed to favor his supporters. In response to a report issued in August by a group of international experts, President Arce revoked the amnesty and promised to reform the justice system.

The international experts documented serious human rights violations during the Áñez interim government, including two brutal massacres by security forces and acts of violence “instigated” under the preceding government of Evo Morales (January 2006-November 2019). They exposed failures by the Attorney General’s Office to conduct adequate investigations and ensure accountability for these crimes.

Women and girls remain at high risk of violence. Prison overcrowding and excessive pretrial detention continue. Indigenous communities face obstacles to exercise their right under international law to free, prior, and informed consent to measures that may affect them, and are severely affected by fires set by farmers that spread to Indigenous lands.

Former President Evo Morales weakened judicial independence during his almost 14 years in power. The 2009 constitution empowered voters to elect high court judges from lists created by the Plurinational Assembly; legislators from Morales’ party—the Movement toward Socialism (MAS, in Spanish)—packed the lists with its supporters. In 2010, all judges appointed before 2009 were deemed “temporary.” Scores were summarily removed.

During Morales’ government, prosecutors filed what appeared to be politically motivated charges against several of his political rivals.

About 80 percent of judges and prosecutors remain “temporary,” heightening the risk that, in order to remain in their positions, they will issue decisions  to please the authorities.

To further its interests, the government of President Áñez publicly pressured prosecutors and judges, leading to criminal investigations, many apparently politically motivated, of more than 150 people linked to the Morales government, for sedition, terrorism, or membership in a criminal organization.

After winning the October 2020 presidential election, Luis Arce, from MAS, said the justice system should be independent from politics. In November 2020, he established a commission of experts to propose reforms.

However, in February 2021, President Arce decreed an amnesty that opened the door to impunity for serious crimes and appeared designed to favor his supporters. In March, authorities detained Áñez and two of her former ministers on terrorism and other charges for their alleged participation in a coup against Morales in November 2019. In August, the attorney general accused Áñez of genocide in connection with two massacres that occurred during her government. Human Rights Watch examined the charging documents and did not find evidence that she had committed terrorist acts or genocide.

Áñez remained in pretrial detention as of November 3. In August, the United Nations Office in Bolivia called on the government to provide suicide prevention and other services to ensure her health.

Also in August, the Interdisciplinary Group of Independent Experts (GIEI, in Spanish), which was established under a government agreement with the Inter-American Commission on Human Rights, issued a report exposing the lack of independence in the judicial system. In response, the Arce administration revoked the February 2021 amnesty decree. In October, his government signed an agreement with UN agencies to reform the justice system that includes receiving recommendations from national and international experts.

The GIEI report documented the deaths of 37 people in the context of protests over contested October 2019 elections. It concluded that, during the Áñez government, security forces had executed 20 pro-Morales protesters and injured more than 170 people in massacres in Sacaba (Cochabamba) and Senkata (La Paz). The report provided robust evidence of illegal detentions, sexual violence, and “systematic” torture by police forces in the predominantly Indigenous city of El Alto, as well as other abuses throughout the country. It also asserted that the police had failed to protect people from violence committed by both pro- and anti-Morales supporters, and in some locations it had encouraged and collaborated with violent groups of anti-Morales supporters that acted as “para-police” forces. The report also documented acts of violence “instigated” by the Morales administration, such as injuries, abductions, and torture of anti-Morales protesters.

The GIEI highlighted major flaws in the investigations into those abuses and called on the Attorney General’s Office to reopen cases it had closed without taking important investigative  steps.

Bolivia has only prosecuted a few of the officials responsible for human rights violations committed under authoritarian governments between 1964 and 1982, partly because the armed forces have at times refused to share information.

A truth commission created in 2016 presented its final report to President Arce in March 2021, documenting killings, forced disappearances, and torture during that period, allegedly by state agents. The 11-volume report calls for the prosecution of those responsible. As of November 3, only the executive summary was available online.

Bolivia had more than half-a-million confirmed Covid-19 cases and nearly 20,000 deaths as of October 27, although government data is likely to significantly undercount deaths. About 30 percent of the population had been fully vaccinated and an additional 29 percent had received one shot of a two-dose vaccine, as of October 27.

The Áñez government closed schools in March 2020. In August, it cancelled the rest of the school year, which was scheduled to end in December. Classes restarted in February 2021, mostly online. Thousands of students could not access classes for lack of devices or internet. By September, 77 percent of schools had resumed some in-person classes, the government said.

However, the impact on the total number of people in detention has been very small. Bolivian prisons and jails held 18,126 people in January 2020; 17,863 people in February 2021; and 17,908 in August 2021. Detention centers hold more than 2.5 times more detainees than they were built to accommodate, making social distancing virtually impossible.

In November 2020, the Ombudsperson’s Office documented overcrowding in 4 of Bolivia’s 16 juvenile detention centers, and inadequate access to health care, education, and sanitation.

The GIEI report documented dozens of physical attacks against journalists by police, soldiers, and demonstrators during the 2019 election-related protests. The report concluded authorities had failed to conduct adequate investigations of these attacks.

The National Press Association, which represents the country’s main print media, reported several cases of violence by police or demonstrators against reporters in 2021.

In August 2021, the government accused media outlets of “lying” and serving foreign interests, and singled out several newspapers because of their criticism of the administration. The National Press Association rejected the accusations and defended freedom of the press.

The constitution asserts the right of access to information, but Bolivia lacks a law to implement that right. The government said it was working on an access to information bill but had not presented it as of November 3, 2021. Comunidad Ciudadana, the largest opposition party in Congress, introduced its own bill in February.

Yet Indigenous peoples continue to face barriers to exercise their right to free, prior, and informed consent regarding measures that may affect them.

The Center for Legal Studies and Social Research (CEJIS), a Bolivian non-governmental organization, estimates that more than 5 million hectares of land in Indigenous territories in the Amazon and other lowland ecosystems—about 42 percent of such territories—were burned between 2010 and 2020. CEJIS reported that farmers set the fires to clear land near the Indigenous territories, a practice facilitated by legislation that extended the area of the Amazon Forest available for agricultural use, granted amnesties for illegal deforestation, and only established a small fine for setting fires without a permit.

Women and girls remain at high risk of violence, despite a 2013 law establishing comprehensive measures to prevent and prosecute gender-based violence. The law created the crime of “femicide,” which it defines as the killing of a woman under certain circumstances, including domestic violence.

Under Bolivian law, abortion is not a crime when a pregnancy results from rape or it is necessary to protect the life or health of a pregnant woman or girl. However, most staff interviewed by the Ombudsperson’s Office in 39 health centers that should perform abortions in those circumstances either did not know the requirements for a legal abortion or cited more requirements than those provided for by the law. In addition, half of those centers lacked adequate facilities to perform abortions and 77 percent lacked multidisciplinary teams mandated by law.

In December 2020, the national civil registry abided by a court order and registered a gay couple’s relationship as a “free union.” In June 2021, however, it denied the same right to a lesbian couple, which has since filed an administrative appeal. The gay couple’s case is pending before the Constitutional Court, which is expected to determine whether all same-sex couples can join in “free unions.”

In 2017, Bolivia’s Constitutional Court revoked the existing constitutional limit on reelection, arguing that it violated the human rights of then-President Evo Morales. In August 2021, the Inter-American Court of Human Rights issued an advisory opinion requested by Colombia, which concluded that barring unlimited presidential reelection did not violate human rights but rather ensured plurality and prevented the perpetuation of power in the hands of one person. Although not binding, the court’s advisory opinions are authoritative interpretations of regional human rights law.

In December 2020, Bolivia, along with Mexico, voted against an Organization of American States (OAS) resolution condemning “fraudulent” elections in Venezuela. In March 2021, Bolivia voted against a UN Human Rights Council resolution urging Nicaragua to repeal or amend legislation that may unduly restricts freedom of expression and association. In June, it voted against an OAS resolution calling on Nicaraguan President Daniel Ortega’s government to release illegally detained presidential opposition candidates, and in October it abstained from another OAS resolution making the same call.