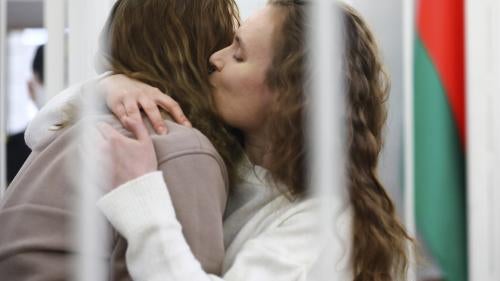 Mass peaceful protests, which had erupted across Belarus in response to President Aliaksandr Lukashenko’s manipulation of the August 2020 presidential vote, largely wound down by the end of 2020 due to the government’s relentless and vicious crackdown. The authorities, however, escalated smear campaigns and prosecutions against political and civic activists, independent journalists and human rights defenders on trumped up, politically motivated charges. In July, Lukashenko announced a “purge” of civil society, and the authorities went on a rampage shutting down dozens of independent mass media outlets and human rights groups, including the most prominent ones in the country.

At time of writing, at least 862 people were behind bars on politically motivated charges. Some of them faced beatings, threats, ill-treatment, and inhumane detention conditions. The authorities disbarred close to thirty lawyers for representing victims in politically motivated prosecutions and protesting human rights abuses.

When dispersing peaceful protests, the authorities, including plain-clothes law enforcement officers, resorted to excessive use of force. Police arbitrarily detained people for wearing or exhibiting the white-red-white stripe pattern associated with the protest movement, at times using brutal force, and charged them with violating rules on public gatherings even if they were detained during raids on apartment buildings.

According to Human Rights Center “Viasna,” at least 8,712 people were detained in connection with the protests between November 2020 and October 2021 and many of them experienced ill-treatment and/or inhuman detention conditions. Courts sentenced more than half of them to administrative fines and short-term sentences; at least 850 faced criminal charges.

In November 2020, activist Raman Bandarenka died after a vicious beating, allegedly by plain clothed police officers or their proxies. The authorities claimed the police had found him on the street, drunk and already beaten. There has been no effective investigation into his death.

In March, authorities toughened administrative sanctions for violating rules on public gatherings. In June, a set of amendments on the law on mass gatherings entered into force, banning all protests without official permission. Later that month authorities introduced criminal liability for joining at least two unauthorized protests over a year and toughened sanctions for calls for participation in unsanctioned protests and broadly defined extremist crimes.

In August, the governmental Belarusian Investigative Committee completed their preliminary inquiry into the allegations of torture and other ill-treatment of peaceful protesters by law enforcement officers in August 2020 and stated that they found no grounds for launching criminal investigations into the 4,644 claims filed by or on behalf of the alleged victims.

The Belarusian Association of Journalists (BAJ) documented 184 cases of arbitrary detention, fines, use of excessive force against and administrative arrests of journalists between January and mid-November 2021. At time of writing, 26 journalists were behind bars on bogus criminal charges, another two media workers were under house arrest and one sentenced to 18 months of restriction of liberty without imprisonment.

In May, Belarusian authorities forced down a Ryanair flight on false pretenses of a terrorist threat and detained Raman Pratasevich, former chief-editor of a leading opposition Telegram channel Nexta, which Belarusian authorities had banned as “extremist,” and his girlfriend Sofya Sapega, a Russian national. In the weeks following their arrest, governmental broadcasters ran interviews with Pratasevich purportedly confessing, evidently under duress, to organizing mass riots and naming his supposed associates. At time of writing, Pratasevich was under house arrest on charges of “organizing mass riots,” “organizing activities violating public order,” and “inciting hatred.” Sapega was also under house arrest on charges of “organizing mass riots” and “inciting hatred.”

Authorities targeted dozens of journalists as witnesses and suspects in trumped up criminal cases and subjected them to house searches, interrogations, and harassment. At least four journalists reported beatings and ill-treatment while in custody, including inhumane detention conditions and denial of medical assistance, in reprisal for their work.

Authorities also cracked down on online media outlets that reported on public protests and exposed human rights violations. The government stripped them of media licenses, raided their offices and the homes of their employees, blocked their websites and banned some of the outlets as extremist. The crackdown on the leading news outlet in the country TUT.by and Poland-based broadcaster Belsat was particularly brutal. Authorities banned them as extremist and subjected dozens of their employees to searches and detentions under criminal and administrative charges.

In June, a set of amendments to the law on mass media entered into force, further expanding official grounds for revoking accreditations and blocking media websites. Amendments prohibited livestreams of unauthorized mass protests and outlawed publications that “discredit” the state, effectively banning all forms of criticism.

In the months following peaceful protests after the 2020 presidential election, authorities escalated the crackdown against human rights groups. Human rights defenders and their family members faced repeated intrusive searches, arbitrary detention and being held in inhumane detention conditions, beatings, interrogations, smear campaigns, as well as petty and cruel forms of harassment. Dozens of human rights defenders were jailed on trumped up criminal charges.

In February, law enforcement officials carried out a nationwide wave of raids targeting human rights defenders and journalists. Authorities claimed the searches of homes and offices were part of their investigation into alleged financing of protests by those organizations. Human rights defender Dzmitry Salauyou was severely beaten by law enforcement officers during and immediately after the search of his home.

By mid-November 2021, authorities initiated the process of closing 278 human rights groups and organizations, including BAJ. In September, the Belarusian Supreme Court upheld the Ministry of Justice’s lawsuit for the liquidation of the Belarusian Helsinki Committee, one of the oldest and most prominent rights groups in the country.

Authorities also shut down the Office for the Rights of Persons with Disabilities, the leading disability rights organization in Belarus. Director Siarhei Drazdouski and lawyer Aleh Hrableuski spent six months under house arrest and in detention, respectively, on spurious fraud charges. They remain suspects in the case.

Over the past year, authorities have increasingly targeted lawyers in retaliation for speaking out on rights issues or representing clients in politically motivated cases. The Ministry of Justice arbitrarily disbarred or revoked the licenses of at least 27 lawyers. Lawyers also faced criminal and administrative charges, searches, and harassment.

Authorities violated fundamental due process protections including interfering with the work of lawyers by recording their confidential conversations with clients and sharing those video recordings with governmental broadcasters, forcing them to sign overly broad nondisclosure agreements, arbitrarily denying them access to their clients, and questioning clients without them present.

In November, amendments to the law on the bar and advocates entered into force, requiring all practicing lawyers to be employed by regional bar associations controlled by the Ministry of Justice, further undermining the independence of the legal profession in the country.

Arrest and Harassment of Political Opposition Members and Supporters

Authorities continued to prosecute political opposition members and their supporters detained before and after the 2020 presidential elections.

In July, the Supreme Court sentenced Viktar Babarika, one of the former presidential contenders, to 14 years in prison on charges of “grand bribery” and “large-scale laundering of illicit funds.” In March, authorities indicted Siarhei Tsikhanouski, also a former presidential contender and the husband of Sviatlana Tsikhanouskaya, current leading representative of political opposition in exile, on charges of “mass riots,” “inciting hatred,” “obstructing the work of central election commission,” and “organizing activities violating public order.” Siarhei Tsikhanouski has been detained since May 2020. In September, a Minsk court sentenced Maryia Kalesnikava and Maksim Znak, members of the presidium of the opposition’s Coordination Council, to 11 and 10 years’ imprisonment, respectively, on charges of “conspiracy to seize power” and “calls for actions aimed at harming national security.,” Their trial was not open to the public. While in pretrial detention, Kalesnikava reported threats and ill-treatment.

Belarus remains the only country in Europe to carry out the death penalty. Currently, at least one person, Viktar Syarhel, convicted of murder, is on death row in Belarus.

In 2021, Belarusian authorities allegedly executed two people. In September, state TV channel STV reported the execution of Viktar Skrundzik who had been sentenced to death having been convicted of murder and attempted murder. In June,Viktar Paulau, who had been sentenced to death following a convicton for murdering two people, was executed, according to his sister. However, at time of writing, Skrundzik’s and Paulau’s families have received no official confirmation of their respective executions. In Belarus, families of executed persons are typically informed by the authorities about the execution several weeks after it had taken place.

In April, Lukashenko granted a “clemency” (replacement of death sentence with life imprisonment) to two brothers, Stanislau and Illia Kostseu, who had been on death row since January 2020, convicted of murder. This is the second known “act of clemency” in Lukashenko’s 27 years in office.

In September, Lukashenko said he would consider holding a referendum on the death penalty.

In March, the United Nations Human Rights Council (UNHRC) condemned the ongoing grave violations of human rights in Belarus and tasked the UN high commissioner for human rights—with assistance from relevant experts—to report on the situation and collect and preserve evidence of human rights violations. As a result, the Office of the High Commissioner for Human Rights (OHCHR) appointed three experts and set up the OHCHR examination on Belarus to monitor the situation, assess evidence and advance accountability.

In July, UNHRC extended the mandate of the special rapporteur on the situation of human rights in Belarus for a period of one year and urged Belarusian authorities to cooperate with the mandate. The annual report by the current rapporteur, Anaïs Marin, documented the unprecedented human rights crisis in Belarus, including police violence against peaceful protesters, cases of enforced disappearance, allegations of torture and ill-treatment, and the repressions against civil society.

Over the past year, Marin and other UN human rights mandates repeatedly called on Belarus to end the excessive use of force, arrests, arbitrary detention and ill-treatment against protesters and the repression of journalists and media personnel. UN Secretary-General Antonio Guterres condemned the use of force against protesters.

In March, 14 Belarusian and international human rights organizations launched the International Accountability Platform for Belarus with the support of numerous governments. The platform collects evidence of alleged human rights crimes in Belarus for future prosecutions.

Some European states, including Lithuania, Germany, Poland, and the Czech Republic opened criminal investigations under the principle of universal jurisdiction into the gross human rights violations perpetrated by Belarusian authorities.

In response to the forced landing of the Ryanair flight, Pratasevich’s arrest and egregious human rights abuses in Belarus, the European Union, the United States, the United Kingdom, and Canada imposed further sanctions against Belarusian individuals and entities deemed responsible for the human rights violations and repression, as well as targeted economic sanctions.

The UN Human Rights Office and UN human rights experts expressed outrage over the Ryanair flight’s forced landing. Guterres called for a “full, transparent and independent investigation” into the forced landing of the plane and Pratasevich’s subsequent detention. The European Parliament also adopted a resolution condemning the forced landing of the flight and the political crackdown in Belarus. EU High Representative Josep Borrell repeatedly criticized the attacks against critics of the government, journalists, and protesters.

In January, the general rapporteur of the Parliamentary Assembly of the Council of Europe (PACE) condemned the death sentence handed down in the case of Skrundzik, calling on Belarus to abolish capital punishment. In June, the EU condemned the likely execution of Paulau, calling for transparency in the Belarusian penal system.