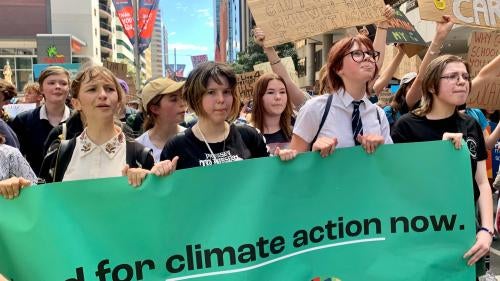 Australia is a vibrant multicultural democracy with a strong record of protecting civil and political rights, but serious human rights issues remain. The Australian government’s failure to address the significant overrepresentation of First Nations people in the criminal justice system and cruel treatment of asylum seekers tarnishes the country’s global standing.

As the Covid-19 pandemic continued, there was a lack of equitable vaccine access for at-risk communities in 2021, including First Nations people and prisoners in New South Wales. Australia is one of a handful of countries that has severely restricted free movement internationally to respond to the pandemic. Until November 2021, Australia banned its citizens from traveling abroad unless they meet strict criteria and limited the return of citizens through strict arrival caps.

2021 marked eight years since the Australia government reintroduced offshore processing of asylum seekers who arrive by boat. Approximately 230 refugees and asylum seekers remained in Papua New Guinea and Nauru at time of writing, with more than 900 refugees admitted to the United States under an Australia-US resettlement deal. Australia announced it will end its offshore agreement with Papua New Guinea at the end of 2021, transferring people who remain there to Nauru.

Some of the refugees and asylum seekers transferred from Papua New Guinea and Nauru to Australia have been detained in hotel rooms, where access to sunlight, space to exercise, and fresh air is limited. A Kurdish refugee who spent more than 14 months detained in a Melbourne hotel room sued the Australian government, arguing its use of hotels for immigration detention is unlawful. In October, more than 20 asylum seekers contracted Covid-19 while in hotel detention.

An ethnic Tamil asylum seeker couple from Sri Lanka and their two Australian-born children spent two years in immigration detention on Christmas Island. In June, their 3-year-old daughter was airlifted to a hospital in Perth after she fell seriously ill and medical facilities on the island were inadequate. Following the medical emergency, the government allowed the family to remain in Australia temporarily, but has denied the family’s application for permanent visas.

Following the Taliban takeover of Afghanistan in August, Australian Prime Minister Scott Morrison rejected calls to allow at least 4,200 Afghans in Australia on temporary visas to be given a pathway to permanent residency. The government earmarked 3,000 humanitarian visas in 2021 for Afghans. The government evacuated 3,500 people from Afghanistan to Australia after the Taliban took over Kabul. 3,000 of these evacuees were Afghan nationals with Australian visas. At time of writing, more than 200 Australian citizens or visa holders remain stranded in Afghanistan after failed attempts to evacuate them.

At least 11 Indigenous people died in custody in Australia in 2021.

A coronial inquest into the death of a 36-year-old Aboriginal man in a New South Wales prison after he had an asthma attack, found there was a “confused, unreasonably delayed, and uncoordinated” medical response by prison staff. In March, a prison officer faced court on charges of manslaughter over the shooting death of an Aboriginal prisoner who was handcuffed and shackled at the time.

In March, the state of Victoria announced the creation of a truth and justice commission to investigate two centuries of violence, abuse, and discrimination against Australia’s First Nations people, modelled on the South African Truth and Reconciliation Commission.

Approximately 500 children under the age of 14 were imprisoned in the past year across Australia. In January 2021, Australia disregarded calls by 31 UN member states who recommended the government raise the age of criminal responsibility from 10 years old to the internationally recommended minimum of 14 years.

New punitive bail laws for children introduced in the Northern Territory led to an increase in the number of children in detention, the majority of them Indigenous. Similar laws introduced in Queensland created, contrary to international human rights law, a presumption against bail for children charged with serious crimes such as breaking and entering, sexual assault, and armed robbery.

Australia has restricted the rights of its own citizens to enter and leave their own country.

From March 2020 to November 2021, Australia banned its citizens from leaving the country as a public health measure during the Covid-19 pandemic, unless they met strict criteria. In August 2021, the ban was expanded to include Australians who normally live abroad. This punitive approach to travel left tens of thousands of Australian families separated from their loved ones.

After a spike in Covid-19 cases in India in May, the Australian government announced a temporary measure of banning Australians who had been in India from entering Australia. Those who disobeyed could face fines of up to AU$66,000 (US$56,000) or five years in prison. No bans on citizens were put in place following similar spikes in 2020 in the US and UK.

Strict and inflexible domestic travel restrictions inside Australia left families separated and others unable to return home, with individuals refused permission to travel across state borders for compassionate reasons or medical treatment, despite willingness to abide by quarantine restrictions.

In July 2021, Australia had one of the lowest vaccination rates among high-income countries, due to a shortage in vaccine supply and a botched rollout of its national vaccination program.

Although the Australian federal government designated Aboriginal and Torres Strait Islander adults as a priority group for vaccinations in January 2021, vaccination rates for Indigenous communities lagged behind the rate of the total population in most parts of Australia.

In New South Wales, Covid-19 spread quickly inside prisons among prisoners who had not yet been offered the chance to be vaccinated. The state government failed to ensure equitable vaccine access for prisoners, with prisoner vaccination rates lagging well behind the general population.

Human Rights Watch research found that Australian universities are failing to protect the academic freedom of students from China and of academics who criticize the Chinese Communist Party, leaving them vulnerable to harassment and intimidation by Chinese government supporters. Chinese pro-democracy students in Australia alter their behavior and self-censor to avoid threats and harassment from fellow classmates and being “reported on” by them to authorities back home.

A new regulation was introduced into parliament in August that would make it easier to deregister nongovernmental organizations if they promote protests in which minor offenses occur.

The Royal Commission into Violence, Abuse, Neglect and Exploitation of People with a Disability continued its hearings in 2021, focusing on a range of issues including the experiences of First Nation children with disability in out-of-home care, and concerns that the Covid-19 vaccine rollout for people with disabilities has been too slow.

Western Australia’s prisons remain damaging and at times deadly for people with disabilities. A Human Rights Watch analysis of deaths in those prisons from 2010-2020 found that about 60 percent of adult prisoners who died had a disability. Due to limited resources, mental health services in prisons are inadequate.

The Royal Commission into Aged Care Quality and Safety released its final report in March 2021, calling for fundamental reform of the aged care system, including increased accountability for violations in aged care facilities, minimum staffing requirements, and greater access to home and community support services for older people.

The Covid-19 pandemic has highlighted systemic understaffing and gaps in regulation. Many aged care facilities use dangerous drugs, often without informed consent, to control the behavior of older people with dementia. The government has not banned the practice and has not conducted sufficient monitoring of facilities’ compliance with existing regulations.

The Australian government has failed to repatriate nationals arbitrarily detained by Kurdish-led authorities in northeast Syria as Islamic State suspects and family members. At time of writing, approximately 80 Australians including 47 children and 20 women remained held in harsh conditions in locked camps and prisons. The government helped bring home eight children from northeast Syria in 2019.

A bill to create new police powers to conduct online surveillance of criminal suspects and take over their accounts was passed by parliament in August, despite the legislation failing to implement safeguards recommended by a parliamentary committee.

Australia is among the top 20 emitters and one of the world's biggest per capita emitters of the greenhouse gases responsible for the climate crisis, and the resulting toll on human rights around the globe.

In 2015, the government pledged to reduce emissions by 26 to 28 percent by 2030 compared to 2005 levels. In October, just days before the COP26 Climate conference in Glasgow, Australia announced it had set a target for net zero carbon emissions by 2050. However, it does not include a commitment to end fossil fuels and did not reveal how it would achieve this target.

The government has continued to actively support the expansion of fossil fuel industries at the expense of renewables, approving several new coal mines including one requiring public financing.

In a major ruling in a case brought on behalf of survivors from the devastating 2019-20 bushfires, in August a court in New South Wales ordered the state’s Environmental Protection Authority to take concrete and specific steps to safeguard against climate change.

In September, the Western Australia state government announced an end to the logging of native forests in an effort to preserve carbon sinks.

In August, the Australian government announced an intention to strengthen its targeted sanctions regime on human rights grounds, but no legislation has been introduced and the scope of the sanctions remains unclear.

Unlike the UK, US, Canada, and the EU, the Australian government has not imposed targeted sanctions on senior military leaders in Myanmar responsible for the February coup and ensuing rights violations.

Australia joined statements condemning the Chinese governments violations in Xinjiang, Hong Kong, and Tibet at the UN Human Rights Council in June, and on Xinjiang at the UN General Assembly in October.

In August, the Senate passed a bill banning the importation of goods made by forced labor, after concerns over human rights abuses in Xinjiang. However, the government voted against the bill in the Senate.

In September, Australia publicly announced that it would back the Indian and South African proposal for a waiver of the TRIPS agreement, the World Trade Organization’s intellectual property rules for Covid-19 vaccines and other health products to enable quicker and fairer access for low-income countries.

Australia pledged AU$100 million (US$74 million) in humanitarian assistance to Afghanistan following the Taliban takeover of the country. No action was taken to compensate victims of alleged war crimes by Australian SAS forces as documented in the Brereton report, which found credible information of 23 incidents of unlawful killing, which killed 39 people.

Australia has not endorsed the Safe Schools Declaration, an intergovernmental pledge now supported by 112 countries to protect education in times of conflict.