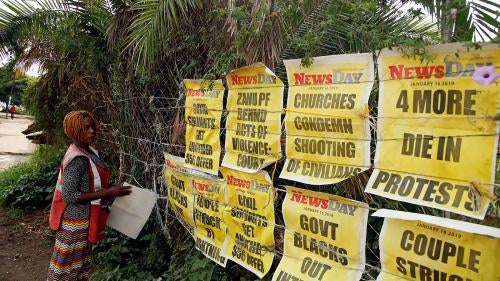 Despite President Emerson Mnangagwa repeatedly voicing his commitments to human rights reforms, Zimbabwe remained highly intolerant of basic rights, peaceful dissent, and free expression in 2019. During nationwide protests in mid-January, following the president’s sudden announcement of a fuel price increase, security forces responded with lethal force, killing at least 17 people, raping at least 17 women, shooting and injuring 81 people, and arresting over 1,000 suspected protesters during door-to-door raids. In the months that followed, several civil society activists, political opposition leaders, and other critics of the government were arbitrarily arrested, abducted, beaten, or tortured. Little to no efforts were made to bring those responsible for the abuses to justice.

On September 6, Zimbabwe’s long-time former ruler, Robert Mugabe, died in Singapore. Despite his 37 years in power having been marked by widespread human rights violations and the ruining of the country’s economy, Mugabe was never held to account for his corrupt and abusive rule.

During nationwide protests against worsening economic conditions, security forces killed 14 men and 3 women between January 14 and February 5. Fourteen of the victims died from gunfire, while three died from injuries sustained following severe beatings. Most of those killed were from Epworth, Chitungwiza, and the Mbare and Warren Park suburbs of Harare, the capital. Security forces appeared to take advantage of the general unrest during the protests and crackdown to commit rape and other serious abuses. On January 15, the government instructed internet service providers to shut down access to social media and the internet. Access was restored on January 21.

Following the protests, security forces rounded up and detained hundreds of people, many of whom were brought before courts on charges of public violence and criminal nuisance.

The Zimbabwe Human Rights Commission investigated the protests and their aftermath and concluded in a report published in September that armed and uniformed members of the Zimbabwe National Army and the Zimbabwe Republic Police systematically tortured suspected protesters.

Following the protests, security forces intensified a crackdown on supporters of the opposition Movement for Democratic Change Alliance (MDCA), union leaders involved in organizing the protests, and civil society activists. Zimbabwe authorities frequently used section 22 of the Criminal Law (Codification and Reform) Act provision on “subverting a constitutional government” to prosecute those suspected of organizing protests. During 2019, several people were charged with “subverting a constitutional government.” This includes seven activists arrested between May 20 and 27 at the Robert Mugabe International Airport in Harare on their return from a workshop on peaceful resistance and civil disobedience in the Maldives, hosted by the Centre for Applied Nonviolent Action and Strategies.

On September 14, as reported by the Zimbabwe Hospital Doctors Association, three unidentified men abducted Dr. Peter Magombeyi, a government employee and leader of the doctors’ union that had organized a series of protests to demand better salaries for government doctors. Prior to his abduction, according to his family and colleagues who spoke to Human Rights Watch, Magombeyi received a text message from a local mobile number threatening him with disappearance. Zimbabwe’s health minister, Obadiah Moyo, confirmed on September 16 that Magombeyi was missing and claimed to have activated all state security ministries to secure his whereabouts. After four days of torture and harassment, Magombeyi’s abductors dumped him outside Harare.

The Mnangagwa administration made some efforts to amend or repeal repressive laws, including the Public Order and Security Act (POSA). The Maintenance of Peace and Order Bill (MOPO) was presented in parliament to replace the POSA, but the proposed new legislation potentially violates international human rights norms and standards, and is too similar to the POSA it seeks to replace. Under the MOPO bill, the exercise of the right to peaceful assembly is not fully guaranteed, as law enforcement agencies are still given broad regulatory discretion and powers.

During 2019, Zimbabwe’s Parliament debated a marriage bill, first introduced in January 2017, which is seen as a long-awaited chance for parliament to reconcile the country’s marriage laws with its constitution. The proposed marriage law, which parliament has yet to finalize at time of writing, seeks to outlaw child marriage, but it does not adequately protect women’s property at divorce. Without legal protection, many women could be left homeless or without a means of income after their marriage ends or if their husband dies.

Current laws on marriage and divorce do not conform to the country’s constitution, which provides that spouses have equal rights and responsibilities.

The Matrimonial Causes Act technically allows for equitable distribution of property between spouses at divorce, considering direct and indirect contributions, such as raising children and caring for the family and household. But in practice, provisions of this law have not been fully applied and many women lose their property when a marriage ends or the husband dies, while men and their families keep everything.

Three years after Zimbabwe’s Constitutional Court declared child marriage unconstitutional and set 18 as the minimum marriage age, the government has not put structures in place to implement the court’s decision and ensure that girls under 18 are not forced into marriage. Zimbabwe’s 2013 Constitution states that “no person may be compelled to enter marriage against their will” and requires authorities to ensure that children are not pledged into marriage, but the government has yet to amend or repeal all other existing marriage laws that still allow child marriage.

Section 73 of the Criminal Law (Codification and Reform) Act, 2004 punishes consensual same-sex conduct between men with up to one year in prison or a fine or both. This restrictive legislation contributes to stigma and discrimination against lesbian, gay, bisexual, and transgender (LGBT) people.

In September 2019, the Harare deputy mayor announced that the Harare City Council had shut down its main water treatment plant, known as Morton Jaffray, due to shortages of imported water treatment chemicals and low water levels at Lake Chivero. This exposed millions of Harare residents to the risk of waterborne diseases like cholera, which have ravaged the city in the past. The conditions that contributed to the spread of cholera during the latest outbreak in September 2018, and another outbreak a decade earlier, continued in 2019, namely: little access to potable water, inadequate sanitation services, and limited information on water quality.

On March 4, US President Donald Trump extended sanctions against the Mnangagwa administration by one year, arguing that the new government’s policies continued to pose an “unusual and extraordinary” threat to US foreign policy. Zimbabwe’s immediate neighbors in the Southern African Development Community (SADC), including South Africa, supported the Mnangagwa administration and appeared to believe that the Zimbabwe economy is not performing well because of sanctions.

At the 39th SADC Summit held from August 17 to 18 in Tanzania, the summit elected President Mnangagwa as chairperson of the Organ on Politics, Defence and Security Cooperation. The SADC summit “noted the adverse impact on the economy of Zimbabwe and the region at large, of prolonged economic sanctions imposed on Zimbabwe, and expressed solidarity with Zimbabwe, and called for the immediate lifting of the sanctions to facilitate socio-economic recovery in the country.”

Following a decision at the SADC summit, SADC member states on October 25 undertook various activities, including protests, to collectively voice their disapproval of the sanctions until the sanctions against Zimbabwe are lifted. The so-called sanctions are targeted sanctions on individual Zimbabweans, most of whom are government officials, and not economic sanctions that could affect the broader population, as the government has often suggested. The SADC leaders, however, failed to publicly address Zimbabwe’s failure to respect human rights, good governance, and the rule of law, key pillars essential for the country’s sustainable socio-economic recovery.

The United Nations special rapporteur on the rights to freedom of peaceful assembly and of association, Clément Nyaletsossi Voule, visited Zimbabwe in September and outlined a slew of “extremely disturbing” abuses by Zimbabwe’s security forces in his preliminary findings, describing “reports of excessive, disproportionate and lethal use of force against protestors, through the use of tear gas, batons and live ammunition.” Voule urged the government to thoroughly investigate the incidents and prosecute those responsible.

On October 1, the US Customs and Border Protection issued a ban on artisanal rough-cut diamonds from Zimbabwe’s Marange diamond fields due to evidence of forced labor. US law prohibits importation of goods made with forced labor.