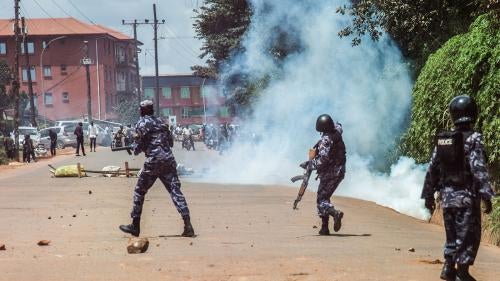 Violations of freedom of association, assembly, and expression continued in 2019 as authorities introduced new regulations restricting online activities and stifling independent media. The government arrested its political opponents and blocked political and student rallies. These restrictions on expression and assembly, arbitrary detentions and prosecutions of outspoken critics, and the government’s failure to ensure accountability for past abuses, do not bode well for the 2021 general elections.

The Ugandan government continued to undermine freedom of expression by imposing new regulations on bloggers and website owners. In 2019, the government introduced new regulations requiring online operators to apply for authorization to host blogs and websites or risk being shut down. Government also censored media outlets, and arbitrarily detained outspoken critics of the president.

In April, the UCC directed 13 radio and television stations to suspend their staff, accusing them of airing programs that were “unbalanced, sensational and often give undue prominence to specific individuals,” after they aired news reports covering opposition politician Robert Kyagulanyi, also known as Bobi Wine. In the same month, police switched off three radio stations in Kabale, Jinja, and Mubende as they hosted prominent opposition leader Kizza Besigye.

In July, media reported that operatives in civilian clothes bundled Joseph Kabuleta, a pastor and government critic, into a police vehicle without registration plates in Kampala. Police said Kabuleta was arrested because of his Facebook posts describing President Yoweri Museveni as a “a Gambler, Thief and Liar.” After his release, Kabuleta said police ill-treated him by throwing water on him while filming him.

In August, a court convicted and sentenced academic and activist, Stella Nyanzi, to 18 months’ imprisonment for “cyber harassment” under the Computer Misuse Act for a poem she published on Facebook in 2018 criticizing President Museveni. The court ruled that the poem violated prohibitions on “obscene, lewd, lascivious or indecent” content.

In April, security officers arrested Kyagulanyi while on the way to address a press conference on issues of “police brutality, injustice and abuse of authority.”  A week later, he was charged with disobedience of statutory duty for leading a protest in July 2018 against a tax on social media use that the government imposed.

In August, Kyagulanyi faced additional charges for inciting violence and with intent to "alarm, annoy or ridicule" the president, stemming from 2018 when Kyagulanyi and 33 other people were arrested and charged with treason on allegations that they threw stones at the president’s car during an election campaign rally in Arua in Northern Uganda. Kyagulanyi and the others alleged that security forces tortured them in detention.

On May 30,  the Constitutional Court declared unconstitutional Section 36 of the Police Act, which allowed police to use unlimited force when dispersing crowds and gatherings with no liability for deaths or injuries. The decision signals the need for reform of other laws that allow police and other security forces to arrest and disperse crowds without limits on the use of force or firearms.

The police used the 2013 Public Order Management Act (POMA) to block, restrict, and disperse peaceful assemblies and demonstrations by opposition groups, often with excessive force. In April, police blocked rallies in support of Kizza Besigye, a leader in the opposition Forum for Democratic Change (FDC), in the Northern Ugandan town of Lira and in Kasese, in the west. In September, police blocked a rally in Mbale, in the east, and arrested arrested FDC President Patrick Oboi Amuriat and three others. On November 4, police blocked FDC from holding a press conference in Kampala, and arrested Beisgye before releasing him on bond later that day.

In October, police and military forces cracked down on student protests at Makerere University in Kampala, firing teargas into student residences, raiding dormitories, beating and arresting students, detaining dozens for days without charge.

Several reforms have been proposed to the laws governing elections and political parties in the build-up to elections in 2021. In July, the attorney-general tabled several proposals including barring candidates from running as independents after participating in party primaries and preventing independent presidential candidates from forming alliances with political parties. Opposition lawmakers said the reforms targeted Kyagulanyi, who said he would run for president in 2021 as an independent candidate.

In April, the Supreme Court upheld the Constitutional Court’s ruling supporting parliament’s 2017 approval of the removal of a 75 year age limit for presidential candidates from the Ugandan constitution. The ruling National Resistance Movement party announced in March that President Museveni, 74, would be its candidate for “2021 and beyond.”

Lack of Accountability for Torture, Killings

In 2018, the director for public prosecutions ordered the police to investigate allegations that security operatives tortured Kyagulanyi and 33 others in Arua in August 2018. To date, police have made no public announcements regarding the progress or conclusion of the investigations and have made no arrests in connection with the allegations.

In August, the speaker of parliament, Rebecca Kadaga, directed parliament’s Human Rights Committee to investigate claims of the existence of safe houses kept by the Internal Security Organisation (ISO) to illegally detain and torture people. This comes after police redesignated Nalufenya detention facility in Jinja, Eastern Uganda, as a standard police station in 2018. Nalufenya had been a notorious place of torture and long-term detention without trial.

In September, the Treasury's Office of Foreign Assets Control in the United States designated former police chief Kale Kayihura for gross human rights violations and corruption through his role as former inspector general of police. While head of police, Kayihura oversaw the Flying Squad Unit and the Nalufenya Special Investigations Center.

In March, the minister of disaster preparedness and refugees, Hilary Onek, told refugees from Rwanda and Burundi to consider returning home because their countries were politically stable, despite reports by the United Nations High Commissioner for Refugees that conditions were not yet favourable for their return.

In July, government officials and police violently and arbitrarily rounded up over 600 children and young adults in Kampala as part of an exercise by local authorities to remove and resettle homeless street children. Witnesses said police used sticks and batons to beat these children as they forced them into vehicles. Ugandan authorities have carried out similarly operations in the past.

Crackdowns on lesbian, gay, bisexual, transgender, and intersex activists continued and same-sex relations remained illegal in Uganda. In May , police shut down celebrations marking the International Day Against Homophobia, Biphobia, Intersexism, and Transphobia event in Kampala, accusing the nongovernmental organization Sexual Minorities Uganda of planning an illegal gathering , forcing the organization to move the event to a private residence.

In October, Brian Wasswa, a young gay man who worked as a paralegal with the Human Rights Awareness and Promotion Forum and as an HIV peer educator with TASO, an HIV/AIDS NGO, was beaten to death with a hoe at his home in Jinja. The following week, Ethics and Integrity Minister Simon Lokodo announced government plans to reintroduce an anti-homosexuality bill in parliament, under which people convicted for consensual same-sex acts would face the death penalty. The government later announced that it had no plans to reintroduce the law.

In 2019, the case of Dominic Ongwen, alleged former Lord’s Resistance Army (LRA) commander charged with 70 counts of war crimes and crimes against humanity, continued at the International Criminal Court (ICC). In October, the court announced that closing statements in this case would commence on March 10, 2020. Two ICC warrants remain outstanding for the arrest of LRA leader Joseph Kony LRA leader and Vincent Otti, who is presumed dead.

The International Crimes Division (ICD) of Uganda’s High Court continued the trial of alleged former LRA commander Thomas Kwoyelo—in custody since his capture in the Democratic Republic of Congo in 2009—on charges of war crimes and crimes against humanity. The trial has had numerous delays. In September, the ICD confirmed charges of terrorism, murder, attempted murder, aggravated robbery against Jamil Mukulu, alleged leader of the rebel Allied Democratic Forces (ADF), and 37 others.

In August, Japan, the United Kingdom, and Germany suspended direct funding of Uganda’s refugee programme because the government failed to punish government and aid officials who colluded in the fraudulent inflation of the refugee population according to the UN’s 2018 audit report, which revealed gross mismanagement of funds meant for refugees.

In May, the European Union Delegation, the Heads of Mission of Austria, Belgium, Denmark, France, Germany, Ireland, Italy, the Netherlands, Sweden and UK and the Heads of Mission of Iceland, Japan, Norway, Republic of Korea and United States issued a joint statement regarding freedom of expression and assembly in Uganda, citing in particular the UCC’s April 30 decision to suspend senior staff of 13 radio and television stations on allegations of breaching minimum broadcasting standards. They also expressed concerns over the excessive use of force by police against peaceful protesters and political opposition.