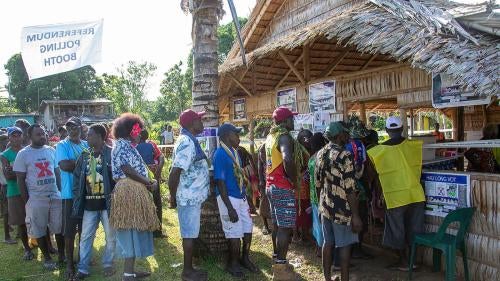 In 2019, lack of accountability for police violence persisted in Papua New Guinea (PNG), and weak enforcement of laws criminalizing corruption and violence against women and children continued to foster a culture of impunity and lawlessness. Although a resource-rich country, almost 40 percent of its population lives in poverty, which, together with poor health care, barriers to education, corruption, and economic mismanagement, stunts PNG’s progress.

PNG imposes the death penalty for serious crimes such as murder, treason and rape amongst others, although authorities have not carried out any executions since 1954.

Peter O’Neill resigned as prime minister in May, amid weeks of political instability fueled by key party defections over his handling of the PNG LNG gas project and dissatisfaction over failure to protect the interests of landowners. PNG’s new prime minister, James Marape, has committed to fixing a myriad of problems in the country, although progress remains slow.

In July, six people were killed in an ambush in Menima village and in retaliation for their deaths, days later gunmen killed eight women and five children in a brutal massacre in the Hela Province. Newly appointed Prime Minister James Marape condemned the killings, calling for the death penalty against perpetrators, although no one had been arrested at time of writing.

Sorcery-related violence continued to endanger the lives of women and girls, although there were no new reported incidents during 2019 at time of writing. In June, six men in New Ireland were sentenced to eight years in jail for torturing three women in 2015, claiming they had practiced sorcery. This followed a 2018 sentence, where eight men were sentenced to death and 88 were imprisoned for life for sorcery-related killings.

According to a report by international nongovernmental organizations (NGOs) released in July, 75 percent of children surveyed across 30 communities in Bougainville, an autonomous island region, and Morobe province had experienced violence at home.

PNG has an underfunded health system and children are particularly vulnerable to disease. An estimated one in thirteen children die each year from preventable diseases, and large numbers of children experienced malnutrition resulting in stunted growth.

School attendance rates for children have improved, however the United Nations Children’s Fund, UNICEF, estimates that a quarter of primary and secondary school-aged children do not attend school, especially girls. Only 50 percent of girls enrolled in primary school make the transition to secondary school.

Despite the establishment of a police task force in 2018 to investigate unlawful conduct by police officers in Port Moresby, police violence continues, especially targeting those suspected of crimes. In November, a video emerged on social media of police viciously beating three men in Port Moresby. Two police officers were charged and suspended following the release of the video.

Media reports state that between September 2018 and January 2019, 133 police have been investigated and 42 arrested, yet convictions remain rare outside Port Moresby. In the same time period, PNG courts convicted and imprisoned 15 police officers in the country’s capital for a range of offences including brutality, aiding prison escapees, and domestic violence.

In March, the Australian Broadcasting Corporation (ABC) reported 50 complaints by the community of Alotau in the Milne Bay Province against police for brutality. In July, the  National Court in Kimbe sentenced three officers to 20 years in prison for killing a person while they were drunk on duty.

Corruption is widespread. In June, Prime Minister Marape announced a commission of inquiry into a A$1.2 billion (US$823.4 million) loan entered into by the former government from the Australian branch of Swiss bank UBS. In December 2018, an ombudsman report into the scandal named nine individuals, including the current prime minister, as failing to comply with proper processes and procedures including findings of potential breaches of multiple acts of parliament and the PNG constitution. In October, police filed an arrest warrant for former prime minister, Peter O’Neill, but it was later withdrawn during a legal battle regarding the validity of the warrant.

In July, PNG police charged a former forestry minister with misappropriating A$944,331 (US$648,000) which was set aside for health workers’ houses.

At time of writing, about 262 refugees and asylum seekers remain in Papua New Guinea, transferred there by the Australian government since 2013. In 2019, the government shut down refugee and asylum seeker facilities on Manus Island and transferred refugees to other facilities in Port Moresby. About 50 “failed” asylum seekers, mostly from Iran, are detained in the Bomana Immigration Center, held virtually incommunicado and denied access to lawyers and their families. Refugee advocates reported that detainees at the Bomana Immigration Centre have no access to phones or the internet, unless they have agreed to assisted “voluntary” return.

Medical facilities on Papua New Guinea have been unable to cope with the complex medical needs of asylum seekers and refugees. Since the re-election of the Australian Coalition government in May, there have been dozens of suicide attempts and acts of self-harm by refugees and asylum seekers.

In June, the UN High Commissioner for Refugees concluded that the mental health crisis cannot be appropriately addressed in PNG and that those with mental health conditions should be transferred back to Australia as a matter of urgency. At time of writing, the Australian government was attempting to repeal a law to facilitate transfers of refugees and asylum seekers requiring medical treatment from offshore locations to Australia.

PNG is rich in natural resources, but the unequal distribution of revenue from mining causes friction as landholders reap little benefit and bear the brunt of environmental degradation, exploitation and economic harm from extractive activities. The Marape government has warned foreign companies, especially mining companies, that they must pay appropriate taxes and royalties to landowners. In multiple cases, landowners have reported being mistreated by foreign companies.

The lease for the Porgera mine by Barrick Gold,  a Canadian gold mining company, and Zijin, a Chinese gold mining company, was set to expire in August 2019. That same month, Barrick’s CEO met with local landowners, who raised concerns about the social, economic, and environmental impacts of the mine. The mine will continue to operate while negotiations are underway.

Despite the existence of a national disability policy, people with disabilities are often unable to participate in community life, attend school, or work because of lack of accessibility, stigma, and other barriers. Access to mental health services is limited, and many people with psychosocial disabilities and their families often consider traditional healers to be their only option.

In 2018, the National Executive Committee directed various government bodies to draft a Disability Bill to address barriers that people with a disability face and to protect their rights. The bill is currently undergoing consultation with key stakeholders.

Same-sex relations are punishable by up to 14 years’ imprisonment in PNG’s criminal code. While there is little information on actual convictions, the law is sometimes used as a pretext by officials and employers to harass or extort money from gay and lesbian people in PNG, including gay refugees.

Australia is the biggest provider of aid and investment to PNG, but China is increasingly playing a larger role, especially in infrastructure projects such as roads and schools. However, there are plans to invest in other projects, such as building a A$400 million (US$270 million) Chinatown in Port Moresby. At the end of 2018, PNG owed almost 24 percent of the country’s total external debt of approximately A$588 million (US$402 million) to China.

PNG is currently seeking international assistance to refinance A$12 billion (US$8.2 billion) in national debt. In August, the Marape government requested that A$607.5 million (US$416.9 million) of Australia’s aid budget to the country be redirected to its treasury department, which Australia refused. Prime Minister Marape also suggested that China open a free trade agreement with PNG, and that it assist in refinancing PNG’s debt.

In November, at time of writing, a referendum was called to decide whether Bougainville will remain a part of Papua New Guinea, or whether it will become a separate country. The result of the referendum is non-binding and there are risks of  violence if the population votes for independence and the PNG government refuses to accept the outcome of that referendum.