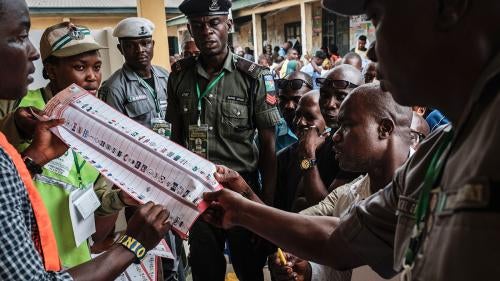 Despite claims by federal authorities of increased security measures, an atmosphere of insecurity persisted across Nigeria in 2019. In May, President Muhammadu Buhari began his second four year term following general elections marred by political violence which killed at least 11 people.

The northeast Boko Haram conflict entered its tenth year, with renewed fighting between security forces and Boko Haram factions killing an estimated 640 civilians in 2019 alone. An estimated 27,000 people, including 37 aid workers, have been killed since the onset of the conflict in 2009,according to the United Nations Office for Coordination of Humanitarian Affairs (UNOCHA).

Elsewhere in the country, there were widespread kidnapping, banditry and recurring cycles of deadly violence between herdsmen and farmers.

The clampdown on peaceful protests, arrest and detention of activists, and media repression signified a renewed intolerance of free speech and dissent by Nigerian authorities.

Boko Haram killed at least 405 children and abducted at least 105 during 2018 and the group continued lethal attacks on civilians including suicide bombings and abductions. In January, at least 60 people were killed when Boko Haram fighters overran Rann, Borno state.

In February, just days before national elections,  eight people were killed in a suicide bomb attack by suspected insurgents in Borno capital city, Maiduguri. Kashim Shettim, then-governor of the state survived an attack that killed at least three people while on a campaign tour to Gamboru Ngala, near the Cameroon border. A similar attack in September on the new state governor, Babagana Umaru Zulim killed four in Konduga, near Maiduguri. In June, triple suicide bombings in the same town killed some 30 and injured another 40. In July, at least 65 people were killed after Boko Haram fighters opened fire on a group of men attending a funeral in Nganzai, Borno state.

In July, Boko Haram fighters killed one and abducted six staff of the international aid group, Action Against Hunger. One of the abducted workers remained missing at time of writing.

Authorities continued to detain thousands of alleged Boko Haram members without trial in overcrowded military barracks in the northeast. In October, the authorities released 25 children held as Boko Haram suspects from Giwa barracks in Borno state after Human Rights Watch reported that children are being held in degrading and inhuman conditions in Giwa barracks. Nigerian authorities detained at least 418 children in 2018 for their or their parents’ alleged association with Boko Haram.

There was little progress on accountability for security forces abuses. Neither the report of the Presidential Judicial Panel set up in August 2017 to investigate the military’s compliance with human rights obligations, allegations of war crimes, and other abuses nor that of a Presidential Panel of Inquiry set up in 2018 to investigate abuses by the Police Special Anti-Robbery Squad (SARS) have been made public.

In March, the spokesperson for the Independent National Electoral Commission (INEC), Festus Okoye, accused soldiers of intimidation and unlawful arrest of election officials in Rivers State governorship  elections. The Nigerian Army immediately announced the creation of a committee to investigate those allegations within two weeks, but was yet to publish a report at time of writing.

Security forces continued the crackdown on members of the Shia Islamic Movement of Nigeria (IMN) protesting the detention of their leader Sheikh Ibrahim El Zakzaky and his wife Ibraheema since December 2015, despite court orders for their release. In July, Nigerian police fired at the group’s procession in Abuja, Nigeria’s federal capital, killing 11. A journalist and a police officer were also killed in the violence, while dozens of IMN members were wounded or arrested.

In April, about 65 women were arrested in Abuja by a task force comprising officers from the city's environment and social development agency and local police during raids on  night clubs. Women’s rights groups took to the streets to protest the raids and the allegations by some arrested women that policemen sexually abused, exploited and extorted them in custody. Twenty-nine women pleaded guilty to prostitution charges and were ordered to pay a fine of three thousand naira (about US$8.50) each.

Clashes between herders and farming communities continued in the Middle Belt, while other parts of the country faced general insecurity, including banditry and kidnappings for ransom. In February, clashes and reprisal attacks between the Fulani and Adara communities in Kajuru, Kaduna state killed more than 130 people.

In July, the federal government buckled under the weight of heavy widespread criticism and suspended the Ruga Settlements program under which  special grazing zones and settlements were established for herdsmen across the country. Critics cited, among other flaws, lack of consultation with communities in proposed grazing zones.

In Zamfara state, incessant banditry attacks and kidnappings persisted despite the deployment of military troops in 2018 to tackle insecurity in the state. According to credible media reports, over 200 people were killed in the state by suspected bandits in the first 100 days of 2019.

The Abuja-Kaduna highway, a major route out of Abuja to the northwest of the country became notorious for bandit attacks and kidnappings. The inspector general of police, Mohammed Adamu said in April that 1,071 people were killed in criminal attacks and 685  kidnapped across the country in the first quarter of 2019 alone.

The Economic and Financial Crimes Commission (EFCC) recorded some progress in the trial of corruption cases.

In June, a Jigawa state high court sentenced Auwal Jibrin, a deputy director with INEC,  to six years imprisonment, for unlawful enrichment and gratification, while another INEC official in the state Garba Ismaila received a seven-year jail term on the same charges.

A federal high court in July ordered the interim forfeiture to the government, of jewelry valued at an estimated $40 million recovered by the EFCC from the Abuja home of former petroleum minister Decani Alison-Madueke. The agency had in April secured a similar interim forfeiture order against the former minister’s alleged property in Port Harcourt. The court found that the property was “reasonably suspected to be proceeds of unlawful activity.”

A Sharia (Islamic law) court in Kano in January fined 11 women charged under the state’s Immoral Acts law for allegedly planning a same-sex wedding. The victims were arrested in December, 2018 by local religious police, known as Hisbah.

In June, the Nigerian Broadcasting Commission (NBC) suspended the licenses of the African Independent Television (AIT) and Raypower Radio station for allegedly airing inflammatory and inciting programs against the government and broadcasting uncensored and unedited social media content. Shortly afterwards, the Department of State Security Services (DSS) declared a crackdown on social media users for posting materials described as threatening to the country’s peace and stability.

On August 3, DSS operatives arrested Omoyele Sowore, a 2019 presidential candidate and publisher of New York-based Nigerian news website, Sahara Reporters, accusing him of planning an insurrection aimed at a forceful takeover of government through his calls for nationwide protests tagged ‘Revolution Now.’ A federal high court in Abuja approved Sowore’s detention under the anti-terrorism law, for a renewable 45-day period, on August 8. Sowore was charged with treason, cybercrime, and money laundering offenses in September and was granted bail pending trial in October, under stringent terms.

Police clamped down on the “Revolution Now” protests across the country and the government said Amnesty International’s Nigeria office was on its security watch for allegedly tweeting a message by the protest organizers.

Following police violence during IMN protests in Abuja, the Nigerian government proscribed the Muslim Shia group, after a court ruled on July 26, that group’s activities amounted to “acts of terrorism and illegality.”

In January, the Chinese government pledged 50 million Yaun  ($5.5 million ) for the purchase of military equipment to support the Nigerian government’s counterinsurgency plans.

In August, UN Special Rapporteur on Extrajudicial, Summary and Arbitrary Executions, Agnes Callamard visited Nigeria to examine violations of the right to life by state and non-state actors. She highlighted in a statement, growing insecurity and widespread failure by authorities to hold perpetrators accountable.

International actors, notably the UN, US, and UK continued to support the Nigerian government’s effort to tackle security challenges and provide humanitarian aid to vulnerable communities but failed to publicly condemn government security forces abuses. UK Foreign Secretary Jeremy Hunt visited northeast Nigeria in May, to reaffirm UK’s commitment to supporting Nigeria and its neighbors in the fight against Boko Haram. The UK provided over £200 million  (approx. $259 million) in aid to Nigeria, of which about £100m was allocated  to the north-east  for security and humanitarian support, including training and capacity building for government forces deployed in the northeast.

The UK and US raised concerns during Nigeria’s 2018 Universal Peer Review about lack of progress on accountability for rights violations by security forces.

Nigeria was appointed to the Working Group on Communications for the UN Commission on the Status of Women, in March. On June 4, Tijjani Muhammad-Bande, Nigeria’s permanent representative to the UN was elected to a one-year term as president of the UN General Assembly’s 74th session starting September 2019.

President Buhari reiterated his support to the International Criminal Court (ICC), urging developed countries to “take the ICC more seriously in order to strengthen democracy and the rule of law” during the visit of Judge Chile Eboe-Osuji, president of the ICC, to Nigeria in June. The Office of the Prosecutor of the ICC continued its preliminary examination relating to the situation in Nigeria in 2019.