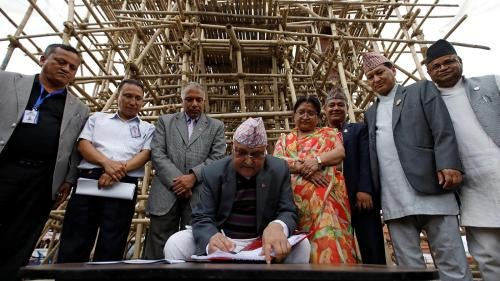 After taking office in 2018, the government of Prime Minister K.P. Oli signaled its intention to amend its laws to ensure accountability for the serious crimes committed by individuals on all sides during the 10-year Maoist insurgency, which ended in 2006. However, after consultations with various groups, the process again became deadlocked, as authorities continued to favor impunity for perpetrators—both security forces and members of the ruling Nepal Communist Party—over justice for victims.

Despite a two-thirds’ parliamentary majority, the Oli government made little progress in implementing the federal structure created under the 2015 constitution, including devolving some powers over justice and policing.

In 2019, the government proposed new laws curtailing free expression and limiting the powers of the National Human Rights Commission.

The government has outlawed several practices harmful to women and girls in recent years. However, weak enforcement along with remaining gaps in laws on sexual violence and gender discrimination continue to leave women, particularly ethnic minorities, at high risk of abuse.

The Oli government proposed amendments in the law relating to transitional justice, but they did not meet international standards that could ensure those most responsible for the worst crimes committed during the conflict come to trial. Instead, the current government, like its predecessors, continued to resist amending the transitional justice legislation to abide by a landmark 2015 Supreme Court ruling, which struck down key components of the current law, such as provisions that would allow amnesties even for perpetrators of war crimes and crimes against humanity.

A commitment to transitional justice was included in the 2006 Comprehensive Peace Agreement, but it was not until 2015 that a Truth and Reconciliation Commission (TRC) and a Commission of Investigation on Enforced Disappeared Persons (CIEDP) were finally established. Despite being previously extended, the terms of members of both commissions expired in spring 2019. The TRC had registered 58,052 complaints of abuses, including allegations against senior figures, while the CIEDP had registered over 3,200 cases of people who remain “disappeared” over 10 years since the conflict ended. However, neither commission had completed a single investigation before the commissioners’ mandates expired.

Victims’ groups objected to the stalled system for appointing new commissioners, which appeared designed to ensure that selected candidates are acceptable to political leaders and the army. Victims’ groups also demanded that the transitional justice law be amended before the commissions resume work, and that they be consulted on strengthening the process, demands which the government has so far resisted.

Attacks increased against journalists and against the freedom of expression of ordinary citizens online. Critical voices were subjected to intimidation by ruling party supporters. Police used the Electronic Transactions Act, which is supposedly designed to address online fraud, to arrest journalists and bloggers, including those reporting on corruption, and even a comedian who upset a movie director with a negative review.

The government presented three pieces of new legislation that further seriously erode freedom of expression. The Media Council Bill establishes a new, government-controlled media council, with the power to impose sanctions, including fines and loss of accreditation, on journalists, editors, and publishers if, for example, they are deemed to have harmed the “image or prestige” of an individual. The new Information Technology Bill is even more draconian than the Electronic Transactions Act it replaces, creating new offences so broadly defined they could plausibly be interpreted to included much online expression, and imposing custodial penalties for those who are convicted. Finally, the Mass Communications Bill duplicated similar provisions, with further penalties, for loosely defined acts of expression.

The government proposed a new law that undermined the independence of the National Human Rights Commission by giving the attorney general powers to decide which cases it brings before the courts, and by removing its right to maintain regional offices.

The Home Ministry prepared draft legislation that will give the government powers to monitor and control the activity of all domestic and international organizations in Nepal. Human rights defenders feared that these powers will be used to harass activists, and to deny access to external funding for human rights work.

The government has outlawed a number of harmful practices including chhaupadi (menstrual seclusion), dowry, witchcraft allegations, and child marriage. However, enforcement remains weak, and these deeply entrenched practices continue.

Legal gaps and lack of political will continue to mar accountability for sexual violence, especially for victims from minority communities. A statute of limitations of one year on rape and sexual violence allegations prevents many cases from being brought to justice.

Despite numerous protests, the government failed to adopt policies to protect and provide justice for women and girls, especially those from minority communities, who faced rape and sexual violence. Instead, numerous cases are mishandled by authorities, including that of a 15-year-old Dalit girl from Mahottari, in southeast Nepal, whose rape and murder at the end on 2018 the police refused to register during 2019.

There is no comprehensive legislation banning gender discrimination. Article 11 of the 2015 Constitution of Nepal confers a fundamentally inferior legal status on women, by preventing them from passing citizenship to their children according to the same terms as Nepali men.

In November 2018, the United Nations Committee on the Elimination of Discrimination Against Women recommended that Nepal endorse the Safe Schools Declaration, an international commitment to protect education during armed conflict. At time of writing, it had yet to do so.

Caste and ethnic minorities remained more vulnerable than others to abuses, including excessive use of force by police, and torture in police custody. Crimes, such as sexual violence, against members of minority communities often go unreported and uninvestigated. In a case brought to the United Nations Human Rights Committee by a member of an indigenous group who had suffered forced labor and torture, the Committee found that Nepal must remove obstacles to victims seeking justice.

Survivors of natural disasters, such as seasonal flooding, who disproportionately belong to minority communities, were often not provided with adequate relief, such as basic shelter. Four years after the 2015 earthquake, which destroyed nearly 1 million homes, many survivors still live in temporary shelter.

The government also failed during the year to publish the report of the Lal Commission, which investigated deadly violence between members of minority communities and the police in 2015.

Despite progress in law and policy, tens of thousands of children with disabilities remain out of school, or are segregated at school in different classrooms from other students.

In 2015, India was widely seen as backing a blockade of trade goods across Nepal’s southern border. Since then, Nepal has attempted to reset its relations with India with discussions that include existing treaties, trade and transit, and border management. Despite its role in brokering the 2006 peace agreement, India failed to call for proper transitional justice.

Meanwhile, Nepal in 2019 strengthened investment and trading ties with China, including participation in China’s “Belt and Road” Initiative. As a result, restrictions on free assembly and expression rights of the Tibetan community continued, under political pressure from China.

In 2017, Nepal was elected to the United Nations Human Rights Council for a three-year term.

Members of the international community, including diplomatic missions in Kathmandu, UN special rapporteurs, and others, continued to warn the government that if a transitional justice process that meets international standards is denied within Nepal, perpetrators of war crimes and crimes against humanity may be subject to prosecution abroad under the principal of universal jurisdiction.