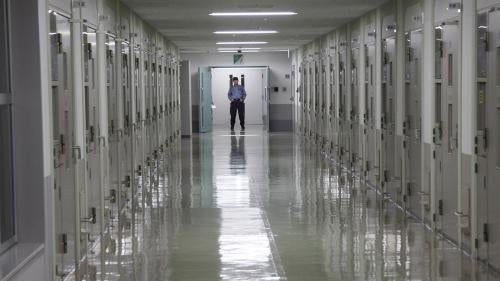 Japan is a prosperous liberal democracy with the third largest economy and a vibrant civil society. In July, the ruling Liberal Democratic Party (LDP) won a solid majority in an upper house election. However, the LDP and its allies failed to maintain a two-thirds majority needed to pursue Prime Minister Shinzo Abe’s grand political goal of amending Japan’s post-war pacifist constitution. In November, Abe became the longest-serving Japanese prime minister.

Japan’s long overlooked “hostage” justice system, in which criminal suspects are held for long periods in harsh conditions to coerce a confession, received renewed attention after the high-profile arrest of former Renault and Nissan head Carlos Ghosn in November 2018 for alleged financial misconduct.

Japan has no law prohibiting racial, ethnic, or religious discrimination, or discrimination based on sexual orientation or gender identity. It accepts an extremely small number of refugees each year, mostly from Asia. Japan has no national human rights institutions.

In December 2018, Japan executed two men on death row for crimes including murder and robbery. In August 2019, two more men were also executed for crimes involving murder and robbery. Anti-death penalty advocates have long raised concerns about death row inmates having inadequate access to legal counsel, being notified of their execution only on the day it takes place, and some being executed after their lawyers filed a request for retrial.

In April, the Japanese parliament enacted legislation to compensate people forcibly sterilized under the Eugenic Protection Act between 1948 and 1996. Under the law, approximately 25,000 people were sterilized. In May, a district court in Sendai ruled that the plaintiff’s constitutional right to pursue happiness, including reproductive rights, had been violated under the now-defunct act. The court, however, rejected compensation sought by the plaintiff, citing the 20-year statute of limitations.

In July, Prime Minister Abe offered the government’s first official apology to families who had members who lived with leprosy and had suffered under the government’s segregation policy between 1907 and 1996, after the government decided it would not appeal a district court ruling that ordered the state to pay compensation. In November, Japan’s House of Councilors (Upper House) approved a law that will enable compensation for affected families.

Protests erupted across Japan this year after a string of rape cases resulted in acquittals. Japan’s rape law requires that prosecutors prove that violence or intimidation was involved, or that the victim was “incapable of resistance.” In one case, a court acquitted a father accused of raping his 19-year-old daughter, although the court recognized that the sex was non-consensual and that he had been physically and sexually abusing the victim since she was younger.

In January, the Supreme Court ruled that the 2004 Gender Identity Disorder Special Cases Act—which requires that transgender people be sterilized to obtain documents reflecting their gender identity—as constitutional. The court stated that there is a “need to avoid abrupt changes in a society where the distinction of men and women have long been based on biological gender.” However, the court also said that the law was constitutional only “at this time,” and two justices of the four-judge bench recognized the need to reform Japan’s law in their concurring opinion.

In February, various same-sex couples in different cities filed lawsuits against the government over the constitutionality of not recognizing same-sex marriage in the first legal challenge of its kind in Japan. In May, supplementary resolutions approved by parliament made it a requirement for the government to include the prevention of Sexual Orientation Gender Identity (SOGI) harassment and outing—exposing someone’s LGBT identity without permission—into the upcoming guidelines for corporations dealing with harassment by superiors in the workplace. The draft guidelines the government revealed in October, however, failed to specify SOGI harassment as required by the Diet supplementary resolutions. The guidelines were still under discussion at time of writing.

In June, Japan’s parliament, the Diet, revised laws to ban corporal punishment against children by parents and other guardians. The law also started the review process to create mechanisms to protect children’s rights following several fatal cases of abuse in the name of discipline.

In April, the Diet passed a bill which for the first time recognized the Ainu as the indigenous people of Japan, as well as banning discrimination against them.

Japan’s asylum and refugee determination system remains strongly oriented against granting refugee status. In 2018, the Justice Ministry received 10,493 applications for refugee status, largely by people from Nepal, Sri Lanka, and Cambodia. The ministry recognized 42 people as refugees, while another 40 asylum seekers were classified as needing humanitarian assistance, allowing them to stay in Japan. In October, a group of lawyers submitted a claim to the UN Working Group on Arbitrary Detention against the government immigration detention practices, which do not require the necessity of detention and can stretch for years.

As Japan continues to experience a serious labor shortage, in April a revised immigration law went into effect, which allows more than 300,000 foreigners to receive work visas in sectors including farming, fishery, and nursing. Previously, Japan only accepted highly skilled foreign workers; blue-collar foreign workers were typically required to apply for visas as either interns or students.

Separately, the government continued the "Foreign Technical Intern Training Program," which binds workers to their sponsoring employers without the option of changing them, to recruit more foreign workers, many from Southeast Asia. The program has drawn criticism for human rights violations, including payment of sub-minimum wages, illegal overtime, forced return of whistleblowers to their home countries, and dangerous or unhygienic working conditions. In March, the Justice Ministry said 171 “trainees” died between 2012 and 2017, 17 of them by suicide.

In June, Japan voted in favor of the International Labour Organization’s ground-breaking Convention on Violence and Harassment after parliament enacted legislation in May that requires corporations to implement measures to prevent power harassment as early as April 2020 for large businesses and April 2022 for medium-to-small businesses.

Freedom of Media and Expression

In August, after receiving a flood of complaints and death threats, organizers of a Japanese art exhibition in Aichi prefecture were forced to withdraw an art installation called the “Statue of a Girl of Peace,” which symbolizes “comfort women” or women who were forced to work in Japan’s World War II-era brothels. Many of the women were Korean. The issue has remained a flashpoint in Japan-Korean bilateral relations. The exhibition re-opened briefly for a few days before it officially ended in October.

Japan’s long overlooked “hostage” justice system, in which criminal suspects are held for long periods in harsh conditions to coerce a confession, received renewed attention after the high-profile arrest of former Renault and Nissan head Carlos Ghosn in November 2018. While Ghosn was detained for 108 days and then another 21 days for financial misconduct allegations, he was granted bail quickly compared to other equivalent cases, apparently due to the international criticism.

In June, a 2016 law came into force that requires video and audio recording of interrogations to a small segment of criminal cases, such as serious cases to be tried by the lay judge system. However, Japanese criminal procedure law continues to allow suspects to be detained for up to 23 days prior to prosecution without the possibility of release on bail and prohibits lawyers from being present during interrogations.

Japan’s official policy is to “contribute to the improvement of the world’s human rights environment” through methods including the “UN’s primary human rights forums and bilateral talks.” In March, Japan contradicted this policy by suddenly dropping its long-standing leadership on the annual United Nations Human Rights Council resolution on North Korea.

In recent years, Japan has abstained from almost all Myanmar-related resolutions at UN forums, including those related to atrocities against the Rohingya.

Japan also did not address the collapse of democratic institutions and the sharply deteriorating human rights environment in Cambodia, where Prime Minister Hun Sen cracked down on opposition politicians, independent media, and political activists. Japan took the lead in drafting a weak resolution on Cambodia at the UN Human Rights Council in September.