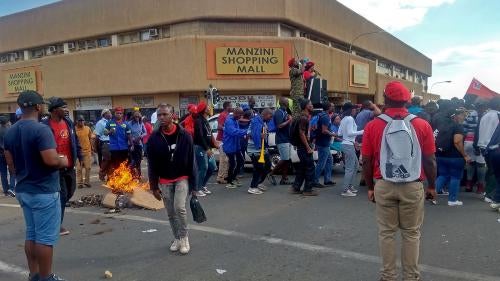 In 2019, Eswatini remained an absolute monarchy ruled by King Mswati III, who has led the country since 1986, with a 1973 decree banning opposition political parties. Despite the adoption of the 2005 constitution which guarantees basic rights, and the country’s international human rights commitments, the government has not reviewed the decree or changed the law to allow the formation, registration, and participation of political parties in elections.

In a move significant for women’s rights, the Eswatini High Court ruled on August 30 that the common law doctrine of marital power (giving a husband the ultimate decision-making power over his wife and the matrimonial property) is unconstitutional as it discriminates against women and denies their constitutional right to equality. The progressive ruling builds on Eswatini’s ongoing law reform process, aimed at promoting and protecting women’s and girls’ rights that included the passing of the Sexual Offences and Domestic Violence Act of 2018, which provides a framework to curb sexual and gender-based violence in the country.

In August, Eswatini public servants who are part of the Swaziland National Association of Teachers (SNAT), the Swaziland National Association of Government Accounting Personnel (SNAGAP), and the National Public Services and Allied Workers Union (NAPSAWU) began mobilizing for a nationwide strike to demand an increase in wages. The police did not disrupt the nationwide mobilization campaigns, but  fired teargas and water cannons to disperse thousands of protesting government workers on September 23. The new Police Service Act of 2018 limits police powers to prevent gatherings as it requires only a “notice of gathering” to be submitted to the relevant local authority, unlike the previous 1963 law that required the police to issue a license to permit public gatherings.

Although Eswatini signed the African Charter on Democracy, Elections and Governance in January 2018, the government did not take steps to ratify or implement the Charter.

Rule of Law and Freedom of Media

King Mswati holds supreme executive power over the parliament and judiciary by virtue of a 1973 State of Emergency decree. The country’s courts have upheld the legality of the decree, contrary to the 2005 constitution, which provides for three separate organs of government—the executive, legislature, and judiciary. The prime minister theoretically holds executive authority, but in reality, King Mswati exercises supreme executive power and also controls the judiciary. The 2005 constitution provides for equality before the law but also elevates the king above the law.

In 2019, Reporters Without Borders ranked Eswatini as 147 out of 180 countries on media freedom. Eswatini’s low ranking in media freedom is partly because journalists are constrained from working freely in the absolute monarchy and courts are not permitted to prosecute representatives of the monarchy.

The Eswatini High Court ruling in August 2019 that the common-law doctrine of marital power is unconstitutional added to existing reforms to end discrimination against women and uphold their constitutional rights to equality. The court also struck down sections of the Marriage Act that subjected African women to customary marital power, perpetuating the violation of their rights contrary to constitutional provisions.

Progressive legislative reforms initiated in 2018 to further the promotion and protection of women and girls’ rights included amendments to the 1964 Marriage Act, prohibiting child marriage, and the passing of the Sexual Offences and Domestic Violence Act of 2018, which provides the framework to curb sexual and gender-based violence in the country.

The under-representation of women in leadership and decision-making positions in both public and private sectors continued during 2019 despite the existence of the 2018 Election of Women Act, designed to fulfill the constitutional requirement for quotas for the representation of women and marginalized groups in parliament.

Eswatini has committed itself to a number of regional and international instruments to promote gender equality, including the Convention for the Elimination of All Forms of Discrimination Against Women (CEDAW), which Eswatini ratified without reservation, and the Southern African Development Community (SADC) Declaration on Gender and Development. Article 20 of the Eswatini Constitution provides for equality before the law and non-discrimination, but does not prevent discrimination on the grounds of sex, language, sexual orientation and gender identity. Eswatini’s dual legal system where both Roman Dutch common law and Eswatini customary law operate side by side has resulted in conflicts leading to numerous violations of women and girl’s rights over the years.

Under Eswatini law, mothers are not permitted to confer their citizenship to

their children under the same conditions as fathers. Eswatini’s Constitution stipulates that any child born inside or outside Eswatini prior to 2005 to at least one Eswatini parent acquires Eswatini citizenship by descent. However, children born after 2005 only acquire Eswatini citizenship from their fathers, unless the child was born out of wedlock and has not been claimed by the father in accordance with customary law.

According to a 2018 national study, 48 percent of girls and women between the ages of 13 to 24 reported having experienced some form of sexual violence, with 1 in 3 girls experiencing some form of sexual violence before the age of 18. In a country with the highest HIV/AIDS prevalence in the world, sexual and gender-based violence is one of the key contributors of new HIV infections.

A colonial-era law criminalizes “sodomy,” with an unspecified sentence. In spite of this law, lesbian, gay, bisexual, and transgender (LGBT) activists successfully held the second ever “Eswatini Pride” event in June 2019, with hundreds marching in the streets of Mbabane in support of LGBT equality.

Eswatini’s new prime minister, Mandvulo Dlamini, attended the SADC annual summit in Tanzania on August 17 and 18. SADC leaders congratulated Eswatini on holding peaceful and successful elections in September 2018. They did not raise concerns about the human rights conditions in Eswatini or press authorities to allow opposition political parties to operate in the country.

In June, representatives of local rights groups met in Geneva with Dubravka Šimonovic, the United Nations special rapporteur on violence against women, its causes and consequences. The representatives called on the special rapporteur to monitor Eswatini’s implementation of the Sexual Offences and Domestic Violence Act, and to monitor and encourage the enactment of laws which strengthen women’s access to land and marital property and reduce their risk of gender-based violence.