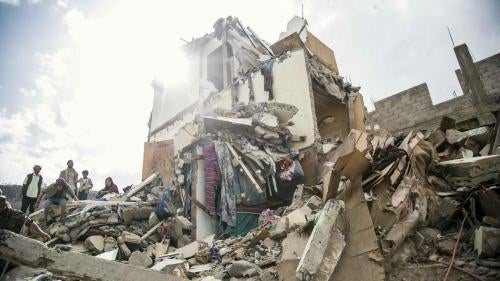 The Saudi Arabia-led coalition continued its aerial and ground campaign in Yemen with little let-up. In September 2014, Houthi forces and forces loyal to former President Ali Abdullah Saleh took control of Yemen’s capital, Sanaa, and much of the country. In March 2015, the coalition, with military assistance from the United States, attacked Houthi-Saleh forces in support of President Abdu Rabbu Mansour Hadi.

After clashes broke out between the former allies in Sanaa, Houthi forces killed former President Ali Abdullah Saleh on December 4 as he tried to leave the city.

The armed conflict has taken a terrible toll on the civilian population. The coalition has conducted scores of indiscriminate and disproportionate airstrikes hitting civilian objects that have killed thousands of civilians in violation of the laws of war, with munitions that the US, United Kingdom, and others still supply. Houthi-Saleh forces have fired artillery indiscriminately into cities such as Taizz and Aden, killing civilians, and launched rockets into southern Saudi Arabia.

As of November, at least 5,295 civilians had been killed and 8,873 wounded, according to the UN human rights office, although the actual civilian casualty count is likely much higher.

The war is also exacerbating the world’s largest humanitarian catastrophe. Both sides are unlawfully impeding the delivery of desperately needed humanitarian aid.

The coalition has used cluster munitions, while Houthi-Saleh forces have used antipersonnel landmines—both weapons are banned by international treaties.

None of the states party to the conflict carried out meaningful investigations into their forces’ alleged violations. 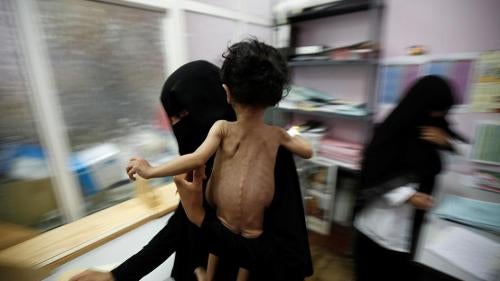 Human Rights Watch has documented 85 apparently unlawful coalition airstrikes, which have killed nearly 1,000 civilians and hit homes, markets, hospitals, schools, and mosques. Some of these attacks may amount to war crimes. In March, a helicopter attacked a boat carrying Somali migrants and refugees off Yemen’s coast, killing and wounding dozens.

In 2017, Saudi Arabia pledged to reduce civilian harm in coalition attacks. Since then, Human Rights Watch documented six coalition attacks that killed 55 civilians, including 33 children; one killed 14 members of the same family. The UN Office of the UN High Commissioner for Human Rights (OHCHR) office reported in September that coalition airstrikes remain “the leading cause of civilian casualties.”

Human Rights Watch documented attacks by both Houthi-Saleh and government-aligned forces inside Yemen that have struck populated neighborhoods, killing and wounding civilians. Over three days in May, artillery attacks in Taizz, most of them carried out by Houthi-Saleh forces, killed at least 12 civilians, including four children, and wounded 29, including 10 children. The OHCHR called the shelling of Taizz “unrelenting.”

Landmines appear to have killed and maimed hundreds of civilians, disrupted civilian life in affected areas, and will pose a threat to civilians long after the conflict ends.

Yemen suffers from a shortage of equipped and trained personnel who can systematically clear mines and explosive remnants of war.

Human Rights Watch has documented the Saudi-led coalition using six types of widely banned cluster munitions, including those produced in the US and Brazil, in attacks that targeted populated areas, killing and wounding dozens.

Yemen, Saudi Arabia, and other coalition states are not party to the 2008 Convention on Cluster Munitions.

Houthi-Saleh forces, the Yemeni government, and the UAE and UAE-backed Yemeni forces arbitrarily detained people, including children, abused detainees and held them in poor conditions, and forcibly disappeared people perceived to be political opponents or security threats. The number of the “disappeared” is growing.

Houthi-Saleh forces have cracked down on dissent, closing several dozen NGOs, carrying out enforced disappearances, torturing detainees, and arbitrarily detaining numerous activists, journalists, tribal leaders, political opponents, and members of the Baha’i community. Since August 2014, Human Rights Watch has documented the Sanaa-based authorities’ arbitrary or abusive detention of dozens of people, including two deaths in custody and 11 cases of alleged torture or other ill-treatment.

In areas of southern Yemen nominally under government control, Human Rights Watch has documented more than 50 people, including four children, arbitrarily detained or disappeared. UAE-backed security forces abusively detained or disappeared most of these individuals. The UAE runs at least two informal detention facilities, where they have continued to detain people despite release orders and reportedly moved high-profile detainees outside the country.

The committee set up by the Hadi government to investigate arbitrary detention has not made any results public. The UAE has denied any role in detainee abuse. Houthi-Saleh forces do not appear to have conducted investigations into detainee abuse.

Both Al-Qaeda in the Arabian Peninsula (AQAP) and the Islamic State in Yemen (IS-Y) claimed responsibility for numerous suicide and other bombings.

The US has conducted at least two ground raids in Yemen since January, reportedly alongside the UAE, one of which killed at least 14 civilians, including nine children. The US may be complicit in detainee abuse by UAE forces. According to the Associated Press, the US has sent interrogators to Yemen and sent questions to and seen transcripts from UAE interrogations. The US has not made public any investigations conducted into its raids in Yemen or participation in UAE or Yemeni abuse of detainees.

In 2017, the US transferred four Yemeni detainees from Guantanamo Bay to Saudi Arabia, news agencies reported.

Yemen is the world’s largest humanitarian crisis, with at least 8 million people on the brink of famine and nearly 1 million suspected to be infected with cholera. This crisis is linked directly to the ongoing armed conflict.

The Saudi-led coalition’s restrictions on imports have worsened the dire humanitarian situation. The coalition has delayed and diverted fuel tankers, closed critical ports and stopped goods from entering seaports controlled by the Houthis. Fuel needed to power generators to hospitals and pump water to civilian residences has also been blocked.

In November, the coalition temporarily blocked all entry points to Yemen in response to a Houthi-Saleh missile attack on Riyadh, gravely worsening the humanitarian situation. Key restrictions remain. In August 2016, the coalition suspended all commercial flights to Sanaa, “having serious implications for patients seeking urgent medical treatment abroad,” according to the UN. Since May, the coalition has blocked international human rights organizations, including Human Rights Watch, from traveling to areas of Yemen under Houthi control.

Houthi-Saleh forces have blocked and confiscated food and medical supplies and denied access to populations in need. They have imposed onerous restrictions on aid workers and interfered with aid delivery. Aid groups have ceased working in some areas due to these restrictions. The cumulative impact of Houthi-Saleh obstruction and interference with humanitarian assistance has significantly harmed the civilian population.

Aid workers have been kidnapped, arbitrarily detained, and killed while engaged in humanitarian operations in Yemen.

The UN secretary-general included the Houthis, government forces, pro-government militias, AQAP, and the Saudi-led coalition on his annual “list of shame” for grave violations against children during armed conflict. In 2016, then-Secretary-General Ban Ki-moon removed the coalition from the list after Saudi Arabia and its allies threatened to withdraw millions of dollars of funding from critical UN relief programs.

Houthi forces, government and pro-government forces, and other armed groups have used child soldiers, an estimated one-third of the fighters in Yemen. By August 2017, the UN had documented 1,702 cases of child recruitment since March 2015, 67 percent of which were attributable to Houthi-Saleh forces. About 100 were younger than 15. Under Yemeni law, 18 is the minimum age for military service. In 2014, Yemen signed a UN action plan to end the use of child soldiers. Due to the conflict and without an effective government in place, the action plan has not been implemented.

In October, Yemen endorsed the Safe Schools Declaration, thereby committing to do more to protect students, teachers, and schools during conflict, including by implementing the Guidelines for Protecting Schools and Universities from Military Use During Armed Conflict.

Violence against women has increased 63 percent since the conflict escalated, according to UNFPA. Forced marriage rates, including child marriage, have increased. Yemen has no minimum age of marriage. Women in Yemen face severe discrimination in law and practice. They cannot marry without the permission of their male guardian and do not have equal rights to divorce, inheritance or child custody. Lack of legal protection leaves them exposed to domestic and sexual violence.

None of the warring parties carried out credible investigations into their forces’ alleged laws-of-war violations. In September, the OHCHR concluded that efforts towards accountability were “wholly insufficient.”

The coalition-appointed Joint Incidents Assessment Team (JIAT) did not conduct credible investigations, failing to release full investigation reports or detailed information on their methodology, including how they determine which strikes to investigate, or whether or not they have the power to ensure prosecutions of individuals responsible for war crimes. JIAT has not clarified which state’s forces participated in the attacks it investigated. While in a few strikes JIAT recommended the coalition pay compensation, the coalition does not appear to have made any concrete progress toward creating a compensation system.

The US is not known to have conducted investigations into any alleged unlawful attacks in which its forces have taken part.

In September, for the third time, the UN High Commissioner for Human Rights recommended establishing an independent, international mechanism to investigate alleged abuses by all sides in Yemen. That month, the UN Human Rights Council (UNHRC) adopted by consensus a resolution creating a Group of Eminent Experts to conduct an international investigation into violations and abuses in Yemen.

Members of the coalition have sought to avoid international legal liability by refusing to provide information on their role in unlawful attacks. The Saudi-led coalition consists of Saudi Arabia, Bahrain, Kuwait, the UAE, Egypt, Jordan, Morocco, and Sudan; Qatar withdrew in June.

The US is a party to the conflict and risks being complicit in unlawful coalition attacks in which it takes part. The US continues to provide in-air refueling and other support to the coalition, but has not provided detailed information on the extent and scope of its engagement.

The UK has provided diplomatic support, training, and weaponry to members of the coalition. UK arms sales to Saudi Arabia are the subject of ongoing litigation in the UK.

The US, UK, and France continued to provide arms to Saudi Arabia and other coalition states, despite the coalition’s use of US and UK-supplied weapons in apparently unlawful attacks. US and UK lawmakers have repeatedly challenged the continuation of these sales.

In April, European Union foreign ministers called for the removal of all obstacles preventing the delivery of life-saving humanitarian assistance to Yemen. In September, the European Parliament reiterated its call on member states to suspend weapons sales to Saudi Arabia due to its conduct in Yemen.

The Netherlands, joined by Canada, Belgium, Ireland, and Luxembourg, successfully led efforts at the UNHRC to create an international investigation.