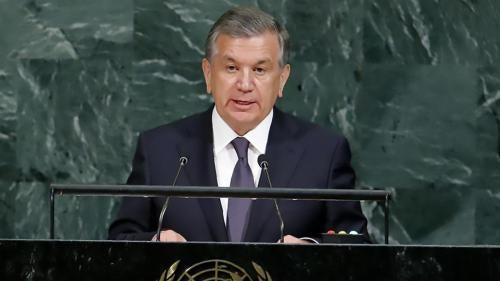 In the year-and-a-half since Uzbekistan’s President Shavkat Mirziyoyev assumed power following the death of his predecessor, Islam Karimov, he has taken some steps to improve the country’s abysmal human rights record, such as releasing some political prisoners, relaxing certain restrictions on free expression, removing citizens from the security services’ notorious “black list,” and increasing accountability of government institutions to the citizenry.

These moves, coupled with Tashkent’s efforts to improve ties with its Central Asian neighbors, have contributed to a sense of hope in Uzbekistan about the possibility for change not witnessed in many years. At the same time, Uzbek security services brought fresh charges against journalists, raising fears of a “revolving door” for political arrests. It is far from clear if Uzbekistan’s still-authoritarian government will follow up the modest steps it has taken thus far with institutional change and sustainable human rights improvements. Grave rights violations such as torture, politically motivated imprisonment, and forced labor in the cotton fields remain widespread. 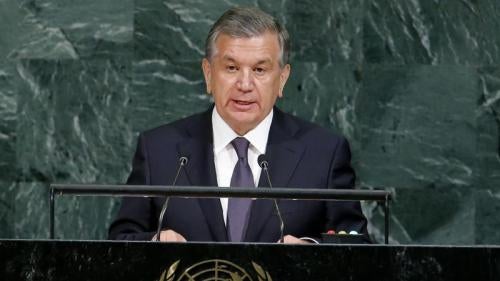 ERKIN MUSAEV
In August 2017, 11 years into a 20-year sentence for espionage and other politically motivated charges...

In August 2017, 11 years into a 20-year sentence for espionage and other politically motivated charges, and following brutal torture and isolation in the basement of Uzbekistan’s security services, Erkin Musaev, a former Uzbek government official and employee of the United Nations in Tashkent, was finally set free. Meeting with human rights activists in Tashkent shortly after his early release, Musaev was hopeful and reflective, even as he described the horrors of the Uzbek prison system. On one occasion, he recalled, he was placed in a freezing cell for 10 days. On another, in advance of a visit to the prison by Uzbekistan’s human rights ombudsman, all the prisoners on Musaev’s floor were lined up and warned not to complain about prison conditions when the ombudsman arrived.

“They beat two prisoners in front of all of us, to make an example out of them, and make sure we kept our mouths shut,” freed political prisoner Erkin Musaev told Human Rights Watch, referring to attempts by prison officials to keep prisoners from making complaints to Uzbekistan’s human rights ombudsman. “Prison guards in Uzbekistan should be trained to treat prisoners with dignity. There were times when they would wake us up at 5 a.m. and make us run in the freezing cold, just to show us we were not human. Other times, they doused us with cold water and prevented us from sleeping. Each prison in Uzbekistan should be equipped with glass boxes where prisoners can lodge complaints and see that their letters do not disappear into a void,” suggests Musaev.

The number of prisoner releases compared to the one or two prisoners released on average per year during Karimov’s rule signaled some hope that President Mirziyoyev could move toward freeing all of Uzbekistan’s numerous political prisoners. However, prison authorities continued in 2017 to use Article 221 of Uzbekistan’s criminal code regarding “violations of prison rules” to arbitrarily extend the sentences of political prisoners.

Authorities have slightly relaxed restrictions on the holding of modest peaceful demonstrations. But the activities of critical voices, including independent rights activists, journalists, and lawyers, are still largely suppressed.

In March, authorities refused to release long-time rights activist Elena Urlaeva from a psychiatric hospital for nearly a month. Many observers believed the detention to be retaliation for Urlaeva’s human rights work, which in recent years has included the monitoring of forced labor in Uzbekistan’s cotton fields.

In June, relatives of imprisoned rights defender Nuraddin Jumaniyazov reported that Jumaniyazov had died in prison on December 31, 2016, of tuberculosis and diabetes-related complications. Authorities jailed Jumaniyazov in 2014 on politically motivated charges, tortured him, and denied him contact with his attorney. In May, Jumaniyazov’s attorney, Polina Braunerg, known for taking on numerous politically sensitive cases, died of a stroke. For three years Braunerg had sought an exit visa to obtain medical treatment abroad but had been repeatedly denied permission.

This year, President Mirziyoyev announced that the country’s exit visas—a Soviet relic that authorities have used as a tool to prevent a wide array of perceived critics, including artists and activists, from foreign travel—would be abolished by January 2019.

While the media sphere remains highly controlled, some public criticism of Karimov appeared in July, when a new 24-hour news channel, Uzbekistan 24, featured criticism of Karimov’s economic and social policies. Local media outlets such as kun.uz have acquired a reputation for more critical reporting, and the government indicated it would invite the BBC’s Uzbek service to base a correspondent in Tashkent.

On September 27, Uzbek security services detained Bobomurod Abdullaev, an independent journalist, in Tashkent, for “attempts to overthrow the constitutional regime.” He has been denied meaningful access to a lawyer, nor has his family been granted access, and he faces up to 20 years in prison.

On the same day, police also detained Nurullo Muhummad Raufkhon, an Uzbek author, at Tashkent airport, after he arrived from Turkey following two years of exile. He was charged with extremism for his book Bu Kunlar (These Days), which criticizes Karimov. He was released on October 1, but still faces charges. On October 20, security services arrested another journalist, Hayot Nasreddinov, on extremism charges.

In September, a Human Rights Watch delegation visited Uzbekistan, seven years after the government banned the organization’s researcher from working in the country.

Forced labor in Uzbekistan’s cotton sector in 2017 remained systematic, both during the spring weeding season and the fall cotton harvest. The government issued a public decree prohibiting the forced mobilization of public sector workers, including teachers, medical personnel, and students into the cotton fields in August, and re-iterated the ban in September, which resulted in many forced laborers returning to their homes and places of work and study. However, various authorities continued to mobilize public sector workers and students to pick cotton on threat of punishment or loss of employment, despite the public decree. In various regions, such as Bukhara, public sector workers were forced to sign forms that they would “voluntarily” pick cotton. Human Rights Watch learned of instances, such as in the Parkent district of the Tashkent region, where authorities forced teachers and medical personnel to conceal their actual professions when signing up to participate in the harvest.

Responding to significant pressure to end forced child and adult labor in the cotton sector, the Uzbek government in 2017 again allowed the International Labour Organization (ILO) to conduct monitoring in the country’s cotton fields, but serious concerns remained as to the ILO’s methodology in conducting monitoring, as their teams included officials from Uzbekistan’s Federation of Trade Unions, which despite its title is governed mainly by representatives from government and employers, not workers.

During 2017, the World Bank, increased its lending commitments to Tashkent for irrigation and agriculture projects to US$300 million, compared to $63 million during the previous fiscal year. While the World Bank’s continued loan agreements are contingent on confirmation by the ILO that cotton laborers are working voluntarily in the bank’s project areas, rights groups have repeatedly found evidence to the contrary.

Global corporations have engaged closely on the issue of forced labor in Uzbekistan’s cotton sector, with over 300 companies, as of June, pledging not to knowingly source Uzbek cotton in their supply chains until the government ends forced labor.

Uzbekistan maintains some of the world’s most restrictive policies on the exercise of worship or belief. Authorities highly regulate religious worship, clothing, the sermons delivered by the country’s imams, and ban all forms of proselytism.

The government maintains a “black list” made up of thousands of individuals suspected of belonging to unregistered or extremist groups. Those on the list are barred from obtaining various jobs, from travel, and must report regularly for interrogations with the police.

Authorities in August announced a reduction of the total number of people on the “black list” from 17,582 to 1,352. In public remarks accompanying the move, President Mirziyoyev emphasized the need to rehabilitate citizens who had been “misled” by radical groups. In a speech to the United Nations General Assembly in September, he touted Uzbekistan’s identity as a center for Islamic education and enlightenment.

Despite this positive move, thousands of religious believers, religious Muslims who practice their religion outside strict state controls, remain imprisoned on vague charges of extremism. In May, authorities sentenced 11 Muslims on extremism charges that appeared fabricated. Rights activist Surat Ikramov said the men’s confessions were procured through torture.

Meanwhile, authorities also continued to harass Christian communities. In April, in the north-western Karakalpakstan autonomous region, four Protestant men were sentenced to short prison terms on charges of meeting for worship in a home.

The Uzbek government moved to re-establish ties with a number of international organizations in 2017, meeting in Tashkent with delegations including the European Bank for Reconstruction and Development (EBRD) and the Organization for Security and Co-operation in Europe’s Office for Democratic Institutions and Human Rights (OSCE/ODIHR).

Signaling a willingness to engage more closely with UN human rights mechanisms, President Mirziyoyev received High Commissioner for Human Rights Zeid Ra’ad al-Hussein in Tashkent in May—the first ever visit by a high commissioner to Uzbekistan. Zeid commended Mirziyoyev for his stated commitment to reforms and urged him to follow through on releasing wrongfully imprisoned activists, to cooperate with UN human rights monitors, end forced labor, and lift restrictions on media.

During the visit, the Uzbek government agreed to resume cooperation with the high commissioner’s regional office in Bishkek. UN Special Rapporteur on Freedom of Religion Ahmed Shaheed visited Uzbekistan in October. At a press conference, he stated that “resilience against religious extremism can be built on strengthening diversity as well as freedom of religion or belief,” adding that religious freedom rights “cannot be sacrificed in preventing or countering violent extremism.”

In July, the EU and Uzbekistan held their 13th Cooperation Council meeting, a few weeks after a Textile Protocol had entered into force. The protocol lowers tariffs on Uzbek cotton, allowing it to reach European markets more easily. In adopting the protocol, the European Parliament underlined the need to maintain efforts to ensure that both child and forced labor are fully eradicated, in cooperation with the ILO and other relevant stakeholders.

In November, European Union High Representative for Foreign Affairs Federica Mogherini visited Samarkand for the 13th EU-Central Asia Ministerial meeting with foreign ministers of all five Central Asian countries. The EU and Central Asian government delegations issued a “joint communique,” which stated the importance of “strengthening of democracy, the protection of human rights, fundamental freedoms and the rule of law in order to enable them to effectively and flexibly tackle threats from violent extremism, terrorism and drug trafficking, and to respond to financial and political challenges.”

In 2017, the US State Department’s human trafficking report again placed Uzbekistan in the lowest category, “Tier III”, based on Tashkent’s systematic use of forced labor. For the 11th consecutive year, the US State Department also designated Uzbekistan as a “country of particular concern” due to its serial violations of religious freedom, but the White House waived the sanctions envisaged under both statutes, citing national security grounds.